YotaPhone 2: When one screen is not good enough

* Update as of 1st April, 2015 * - Shortly after publshing the review, we've been informed by the product's public relations group that the phone's price has since been revised from the original debut price. It's now S$1,048 with GST instead of S$951. All price mentions in the article have been updated to reflect the new price and value rating of the smartphone has been notched down from 7.0 to 6.5. 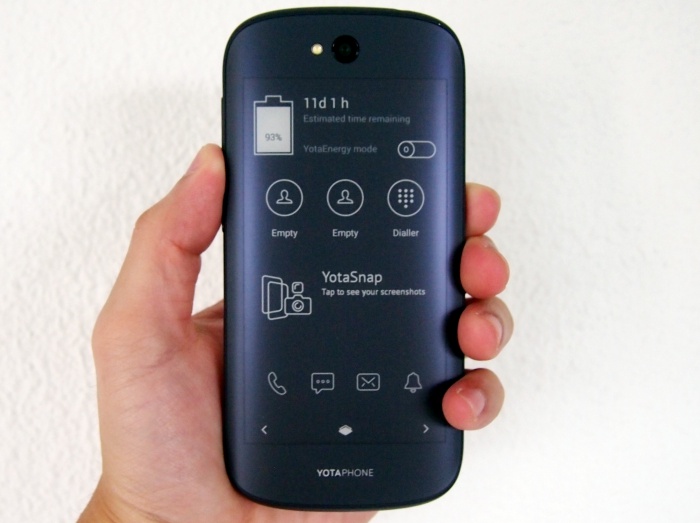 Two screens better than one?

Since the advent of touch screen smartphones in 2007, smartphone design advances have mainly revolved around a front display with little or no physical buttons. It was only until the latter part of 2012 when a Russian company Yota unveiled the first generation YotaPhone, the world's first dual screen smartphone. It has two 4.3-inch displays - LCD on the front and Electronic Paper Display (EPD) on the back. The YotaPhone was available in selected countries in the second half of 2013.

At Mobile World Congress 2014, Yota announced its successor, the YotaPhone 2 with improved specs such as a sleeker design, bigger and higher resolution displays, a more powerful processor and Android 4.4 KitKat. While consumers in Singapore missed the first generation device, the YotaPhone 2 arrived on our shores in late January this year at a retail price of S$889 (before GST, ~$951 with GST)  S$979 (before GST, ~$1,048 including GST). Does having two screens justify its expensive price tag? More importantly, do we need two screens? Let's find out in this review, right after this video overview: 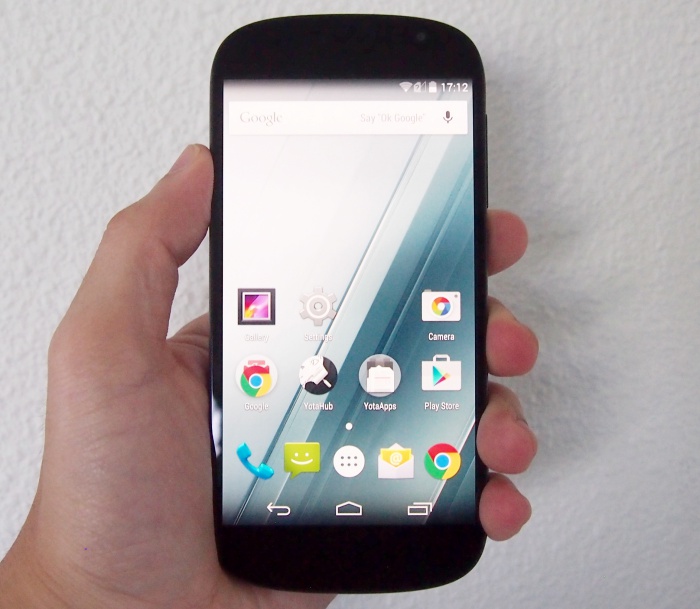 While we can say it is revolutionary for Yota to introduce dual screens to a smartphone, we cannot say the same for the design of the YotaPhone 2. It bears a striking resemblance to the Samsung Galaxy Nexus with its smooth, rounded corners. There's absolutely nothing wrong here since most smartphones these days look somewhat similar, but we've expected Yota to at least bring a unique design language to the table.

With a price tag of over S$900 a thousand dollars, we had expected a little more. There is no metal chassis like the S$948 Samsung Galaxy Alpha or the water and dust-proof capabilities of the S$798 Sony Xperia Z3 Compact. Even the S$449 ASUS PadFone S comes with an aluminium frame. What you get is the YotaPhone 2 encased in a matte plastic frame and we couldn't help but feel that more premium materials could have been used to justify its price tag.

Handling the YotaPhone 2 felt awkward initially as we had to get used to having either display on the palm of our hands. The handling experience is better and more natural with the EPD nestling in the palm of our hands as it has a matte surface and the display actually curves along the sides.

Flipping the phone over to use the EPD display gives rise to a vastly different handling experience; we are not used to feeling the glass texture and sharp corners of the main display coming in contact with our hands. If you are planning to buy this phone, this is a concern that you need to consider although it is something this reviewer could overcome after using the YotaPhone 2 a couple of days to be familiar with its handling.

The left profile of the phone is left bare and void of any functions, while the right side houses the volume rocker which doubles as a nano-SIM card slot, and the power button. The 3.5mm audio output jack can be found on the top left side of the YotaPhone 2 and a micro-USB port flanked by speaker grilles. 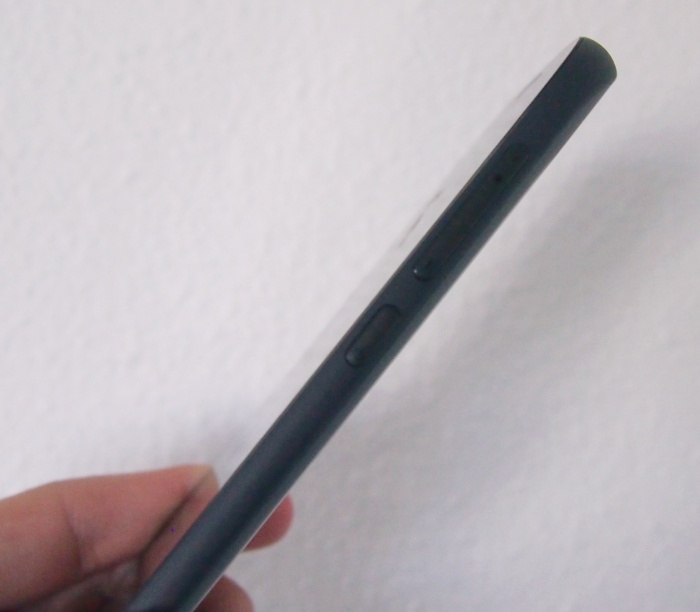 The YotaPhone 2 has a 5.0-inch Full-HD front AMOLED display (1,920 x 1,080 pixels) and a 4.7-inch qHD EPD (960 x 540 pixels) . As with most AMOLED panels, the front display is very bright and dishes out very deep blacks. Colors are really rich and vibrant, making it perfect for viewing multimedia content.

Being an E-Ink display, you cannot have high expectations of the rear display. There is no color support although the EPD is capable of delivering 16 different levels of gray. As mentioned in the earlier section, the rear EPD display has a matte texture which mutes the contrast and sharpness.

In addition, the refresh rates take slightly more than a second which can feel like an eternity for many of us who are used to split second screen transitions. Therefore, the rear display is only really suitable for reading ebooks, viewing notifications and nothing more. It does support a range of other features and functions, but we will discuss those options later in this article.

As expected of an EPD display, it's clear and legible even under direct sunlight, but because it has no backlighting, the EPD isn't usable in the dark. This definitely reduces the EPD's usefulness. Without any backlighting, battery consumption of the rear display is low even though it is always on.

With a dual-sided phone, it may seem like a dilemma when deciding which side is appropriate to face the surface when placing the phone to rest. Fortunately, you can be assured that either side is capable of surviving the everyday wear and tear as the display panels are reinforced with Corning Gorilla Glass 3. As long as you do not purposely rest the YotaPhone 2 on a concrete floor or leave it at the mercy of your house keys or coins in the same pocket, the YotaPhone 2 should be able to maintain its pristine condition.

Preloaded on the YotaPhone 2 is Android 4.4.3 KitKat with some Yota apps (YotaMirror, YotaCover and YotaPanel). These three Yota apps are developed specifically to make use of the rear 4.7-inch EPD. Having said that, the available storage space out of the box from the YotaPhone 2 (32GB) after updating all the preloaded apps is about 24GB. There is no memory card slot to increase the storage capacity, so the 32GB model sold in Singapore should suffice for most mainstream users with some careful app management. Now, let's take a closer look at what each Yota app does:

As the name suggests, YotaMirror enables you to have the Android layout on the front display to be replicated on the rear display. It can be enabled anywhere and anytime (except when you are in a room with no lights) on the YotaPhone 2.

For example, you may be reading a long email on the front display and decide to minimize power drain. You can activate YotaMirror and switch to the rear to continue reading your email leisurely. The YotaMirror will come in handy for activities which require low refresh rates such as reading and using the calculator. It's an ideal match for consumers who do not want to carry a dedicated e-reader device since the YotaPhone 2 can toggle between phone and e-reading duties effectively.

YotaCover is a always-on wallpaper with four dock shortcuts at the bottom - phone, messages, mail and notifications. While the dock shortcuts cannot be customized, you can change the wallpaper and even set it to change the photo at selected time intervals. For Facebook and photos stored on your device, you can select the album for YotaCover to pull the images from for the rotating carousel. The ability to select albums to pull images for the YotaCover brings personalization to the next level on the YotaPhone 2.

YotaPanel is a set of screens (up to four) which displays information you are interested in. By default, YotaPhone 2 has three panels for your selection. You can choose to keep or delete any of them since you are limited to four screens at any point in time.

Customization of the screen starts with selecting any of the presets and then the preferred layout (referred to as "grids"). Do note that different layouts will give you access to different widgets. For example, the layout with a big space will give you access to widgets such as an app launcher, a full sized calendar widget and six frequently dialled contacts. In other words, there are many ways to personalize your own screen. There is one catch to using YotaPanel; navigating between the different screens felt sluggish and this could be due to the sheer number of live-updating widgets. This is further exasperated given that the EPD isn't ideal in catering to frequently changing information.

This is pretty straightforward; it is an energy-saving feature that can be enabled from the YotaPanel, set to turn on automatically when the battery hits 5%, 10%, 15% or a custom battery percentage, or via the quick settings panel when you swipe down.

What it basically does is to lower the brightness of the front display. You also have a range of options within YotaEnergy to toggle with. For example, you can limit the CPU frequency, disable Bluetooth, Wi-Fi and GPS connectivity. 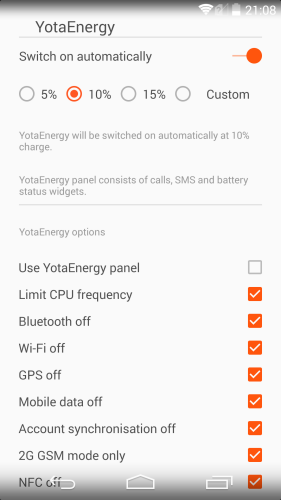 Write a Review
Compare This | Specifications
Unique dual-screen design
Good battery life
Decent software features to make use of second display
Average imaging performance
Awkward to hold the phone when using the Electronic Paper Display
Very expensive
Our articles may contain affiliate links. If you buy through these links, we may earn a small commission.
Sponsored Links