This is the reason why the first iPhone did not have copy and paste
Product Listing
A.C.RyanAstoneASUSAVerMediaAwindAztechDViCOHDIKworldMediaGateNoontecOvationPenDrivePixel MagicQNAPRapsodySeagateSPEEDWestern DigitalXtreamer

With digital media content easily available, many consumers are finding the physical dimensions of their notebook screen or desktop monitor too constrained when it comes to viewing high-definition content. Nothing beats watching a full HD movie on the large TV set in your living room. Having a home theatre PC (HTPC) in the living room is the most versatile option as it can process almost any media type - limited only by the software and codecs used. However, the process of setting it up and maintaining it will be a challenge to anyone but techies at heart.

Compact, convenient and low-cost, media players are widely available and are a great solution to those looking for a simple and fuss-free method of enjoying their digital media content in the living room. In fact, the newer media players have evolved beyond simply playing music and video files, and can now access the Internet. A new trend as of late has seen some recent players incorporating the Android OS as the main software backbone in a bid to take advantage of the host of apps found in the Android ecosystem.

In a scene similar to the smartphone landscape, while both the AC Ryan Veolo and Aztech PlayXtreme 2 sport the Android operating system, they both differ in terms of implementation. And since the current crop of media players are able to playback most of the popular media file formats, the user-friendliness and layout of the interface plays a much bigger role in differentiating between the various offerings. 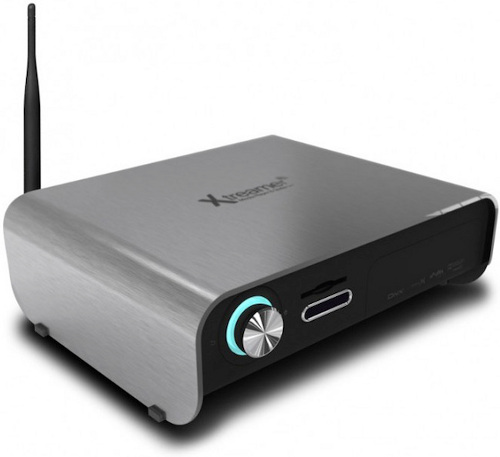 The Prodigy Silver is the latest media player from Xtreamer to feature the Android OS. However, it sets it self apart from its competitors by including the Android OS as an additional but not compulsory, part of its interface. In an attempt to further set itself apart from the competition, the Xtreamer Prodigy also comes with the ability to tackle playback of 3D media files. Armed with these features, will the Xtreamer Prodigy Silver set a new standard for media players? Read on as we detail our opinion from hands-on trials.

For those wondering why 'Silver' is part of the product's name, that's because Xtreamer has a Prodigy Black that has the all the functions and features of the Silver model, and adds dual-channel DVB-T tuner with digital video recording from these channels. Of course, these extra functions may not be of much use in this region and thus the Silver model is more apt for consideration.

Write a Review
Compare This | Specifications
BD-ISO & 3D movie files support
Android platform to expand on functionality
Allows installing a 3.5-inch internal hard drive
Built-in Wi-Fi
A variety of anaog and digital I/O ports
Big and bulky
Sluggish UI
Silver metal body may not appeal to some consumers
Pricey
Our articles may contain affiliate links. If you buy through these links, we may earn a small commission.
Sponsored Links