Xiaomi Redmi Note - A Phablet for the Masses

The Redmi Note is powered by a MediaTek MT6592 8-core processor. It comes in two flavors: one clocked at 1.4GHz with 1GB RAM and the other at 1.7GHz with 2GB RAM. The retail unit sold in Singapore will be the 1.7GHz variant.

Dubbed the world's first true octa-core processor, the MT6592 packs 8 Cortex A7 cores which can operate simultaneously for the most demanding tasks (e.g. gaming) or use just one core for lightweight tasks (e.g. active standby). In other words, the octa-core architecture allows the CPU to harness the full capabilities of the 8 cores in any combination for different types of tasks.

Do 8 cores benefit the daily user experience? MediaTek believes it does by pointing out that several applications such as Chrome, Maps, video playback and multi-window features can use 8 cores. What about the impact on power consumption and shorter battery life? The chipset maker claims it is able to attain "outstanding power efficiency" with its advanced scheduling algorithm that monitors temperature and power consumption to ensure maximum performance at all times. Below are some videos from MediaTek to prove its claims:

How the MT6592 Chip Can Maintain Optimal Performance Overtime

How the MT6592 Chip Can Maintain Lower Power Consumption Overtime

On the other side of the camp, Qualcomm thinks that it is not all about the number of cores. It believes apps need faster cores, not more cores. Using the top 20 apps in China, Qualcomm shows that 85% of the apps are using two cores while the other 15% barely use beyond two cores. Below is a video depicting Qualcomm's stand:

As this review is not intended to discuss who's right or wrong, we will save the argument for anther day. Meanwhile, we've highlighted the arguments from both sides and will provide our personal take on the MediaTek processor later in this review.

We will be comparing the Redmi Note against the HTC Desire 816, the LG Optimus G Pro and the Samsung Galaxy Note II. The latter two devices are included as they are already in the market for at least a year and the street prices have reached the mass market levels.

The Redmi Note clinched the top spot with a score of 17,541, which represents a 35% better performance in the Quadrant benchmark than the Desire 816. The two-year-old hardware in the Galaxy Note II is obviously outclassed by the newer processors in the other devices.

As we do not have the review units for the Optimus G Pro and Galaxy Note II, we are unable to run the 3DMark tests on them. Hence, we will only compare the Desire 816 and Redmi Note. 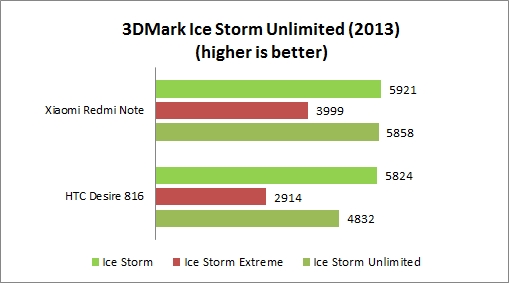 In all three test sections, the Redmi Note consistently performed better than the Desire 816. For example, the MediaTek MT6592 octa-core chip outperformed the Snapdragon 400 counterpart by 21% in the Ice Storm Unlimited benchmark. But does this pan out well in real world usage?  You'll find out soon enough.

All four devices have comparable scores in the SunSpider Javascript benchmark, although it is puzzling that the Redmi Note did not fare as well as the Mi 3 which has a score of 653.3ms. Possible reasons for the disparity in performance include software optimizations due to different Android versions and the benchmark may not be optimized for octa-core processors.

For the above benchmarks, we set the Redmi Note to a custom mode where CPU usage was tweaked to High Performance and Airplane Mode turned on. Hugo Barra, Vice President for Xiaomi Global, told us that this method is recommended for running benchmarks on the Redmi Note.

We also played Asphalt 8: Airborne, an Android arcade racing game series to test out the MediaTek processor and compared it against its Snapdragon 400 counterpart on the Desire 816. It turned out that Qualcomm is right; the gaming experience was a tad smoother on the Desire 816. In addition, the area near the rear camera felt warm after just one round of gaming (estimated to be about three to four minutes) on the Redmi Note. Do note that our findings from real world usage experience are based on Balanced Mode.

The Redmi Note comes with a 13-megapixel rear camera with an aperture of f/2.2, 28mm wide angle lens and a LED flash. On paper, the Redmi Note is comparable to the Desire 816 in terms of imaging capabilities. Let's see the image quality of the Redmi Note below: 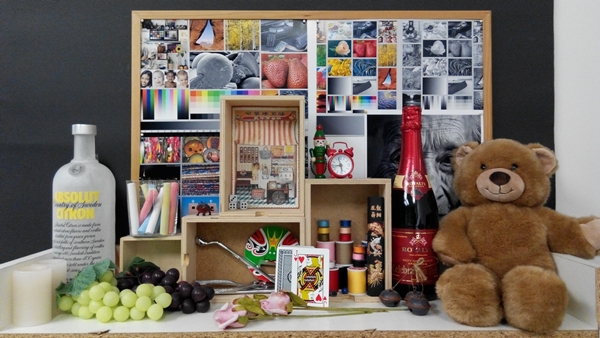 The lack of a backside illuminated sensor (BSI) on the Redmi Note caused it to fare poorer than the Desire 816 in low light photography. BSI sensors are designed to collect more light at the pixel level so that the image output has less digital noise and hence, better low-light images.

The Redmi Note lasted about 7 hours and 28 minutes in our standard battery test, which is the second lowest mileage among the four devices. To put that into perspective, the Desire 816 with a smaller battery capacity fared 8% (or 37 minutes longer) better than the Redmi Note. The Optimus G Pro might be last, but one has to take into account its Full-HD (1,920 x 1,080 pixels) display. The Galaxy Note II is still the top in its class thanks to the more power efficient Super AMOLED display.

Looking at the Power Consumption chart, the Redmi Note has an unusually high power draw; its power consumption is 24% higher than that of the Desire 816 even though both sport the same display size and resolution. We also observed the same findings in our review of the Mi 3 where the 5-inch smartphone drew nearly twice as much power as its competitors. Do note that the power setting of the Redmi Note was set to Balanced (or Default) mode.

We measure the portability of a device by calculating its battery life to (weight x volume) ratio. As the Redmi Note is the thickest and heaviest among the four phones compared, it ranked poorly in our Portability Index.

But benchmarking gives only one view to the above assessment. To give you a more realistic understanding on how the Redmi Note fared under real world usage conditions, we included screenshots of the usage and history graphs.

As seen from the graphs above, the Redmi Note could last 25 hours before the battery level dropped to 13%. Screen-on time is about 4 hours and 22 minutes. Some notes:

Do note that battery mileage varies depending on your usage patterns. For us, the Redmi Note had no problems lasting through a day at work with enough battery juice to last till late morning the next day.

If you've read our reviews of the Redmi and Mi 3, you would know that it's pretty much the same story with the Redmi Note. The Redmi Note packs hardware typically found in higher-end smartphones into an affordable package. In fact, it boasts a unique and strong feature set which includes a decent 5.5-inch 720p display, dual-SIM support, the highly customizable MIUI V5 OS, a decent 13-megapixel rear camera and a removable battery that can last beyond the length of a working day.

The biggest friction seems to be the user experience. Even though we should manage our expectations of the Redmi Note as it is not designed to compete with the premium phablets, it is just perplexing to see and feel the octa-core processor struggling to deliver a smooth experience. It's not a new issue that we've encountered as we had similar experiences when using the Redmi and Mi 3. Maybe it's time for Xiaomi to better optimize the hardware and software components of its devices. Another major concern we have with the Redmi Note is its bulky form factor. It is easily the heaviest 5.5-inch device of its class and trust us when we say it feels like lugging a brick in our hands or pockets.

Priced just one dollar shy of S$200, we are sure many consumers are willing to overlook its flaws and go ahead to buy it. We are not going to rain on your parade either; the Redmi Note is no doubt one of the most irresistible, value for money Android phablets to be unveiled this year.

Assuming that you manage to resist the S$199 price tag, we have another solid albeit more expensive recommendation - the S$498 HTC Desire 816 which offers a sleeker design, better handling, improved imaging quality, smoother overall performance and the easily accustomed Sense UI interface.