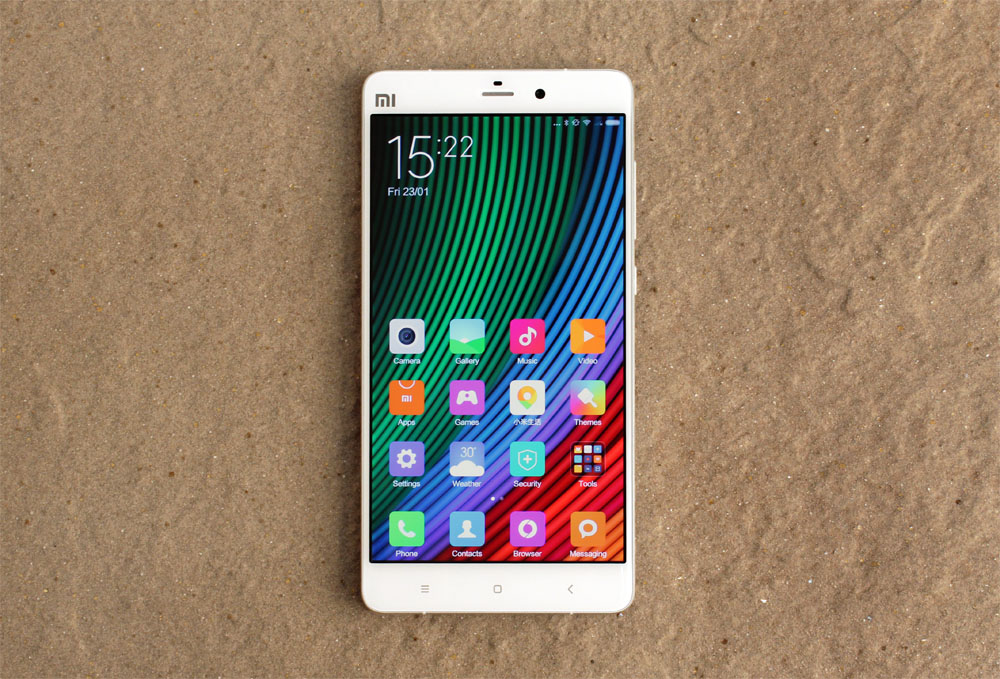 Xiaomi's latest phone is something of a departure from its usual fare. The 5.7-inch Mi Note phablet is a cut above the wallet-friendly offerings Xiaomi has offered in the past, and its premium design, build and specs put it in the same league as the flagship phones from Apple, Samsung and other smartphone giants. But can Xiaomi compete at the very highest level?

Xiaomi CEO, Lei Jun, certainly thinks so. He wasn't afraid to take more than a few jabs at Apple during his unveiling presentation, declaring "Our phone is lighter, thinner, narrower and shorter than the iPhone 6 Plus. But we have a bigger screen.” To be fair, maybe Lei Jun has a right to boast. Backing him up is an array of impressive features, including a 13MP Sony camera with optical image stabilization (and without the protruding camera bump visible on the iPhone 6 Plus), a 3,000mAh capacity battery, a dual- nano and micro SIM card tray slot, and an onboard ESS ES9018K2M stereo DAC (digital-to-analog converter).

So far, it sounds impressive. But is the Mi Note more than just an impressive spec sheet?

Here's a closer look at the Mi Note's specs:

While Lei Jun was quick to compare the Mi Note to Apple's iPhone 6 Plus, to the surprise of many, and to the credit of Xiaomi's design and engineering teams (and unlike some other Xiaomi devices), the phablet isn't actually a complete Apple ripoff (although we imagine Samsung can't be too happy about Xiaomi hijacking the 'Note' brand name). The overall design of the Mi Note actually borrows elements from many places - the rear glass resembles the iPhone 4 and 5, or Sony Xperia Z line, the chamfered bezels look like older iPhones or newer Samsung phones, and the curved glass back reminds us of the display on the Samsung Galaxy Note Edge. Ultimately, while there will be no awards for design innovation here, there's enough to make the end result feel new and fresh.

For a more in-depth visual comparison of how the Mi Note compares to the iPhone 6 Plus, refer to this article. The front of the device is dominated by its 5.7-inch display. True to Lei Jun's word, despite boasting a larger screen size, the Mi Note is indeed narrower and shorter than the iPhone 6 Plus. The phone measures 155.1 x 77.6mm, making it 3mm shorter and 0.2mm narrower than the 6 Plus. Impressively, it also has thinner bezels, and it's about 11g lighter too. The Gorilla Glass 3 front panel is very slightly curved at the edges, just like the iPhone 6 Plus, but it's harder to appreciate on the Mi Note as the glass runs right up to the chamfered bezel. 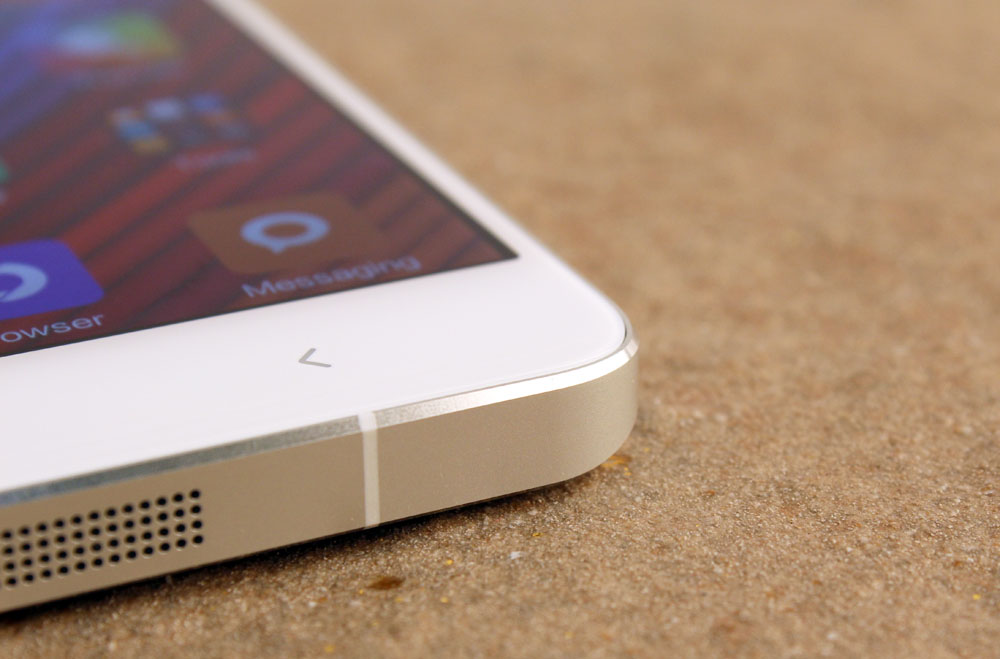 An aluminum frame with chamfered bezels runs around the edge of the device, tapering down to about 4mm at the sides, and widening out to 6.95mm at the top and bottom edges. At the thickest section, this makes the Mi Note 0.15mm thinner than the iPhone 6 Plus (which is insignificant) and 1.55mm thinner than the Galaxy Note 4 (which is).

The back of the device is arguably more interesting than the front. Xiaomi's '3D curved glass' rear panel has a dramatic taper, curving drastically at the left and right edges - the curve actually reminds us a lot of the front of the Samsung Galaxy Note Edge (without the underlying display of course). In hand, the rear curve feels good and handles well. It's somewhere between the blocky slab feel of the Galaxy Note 4, and the often slippery, rounded edge of the iPhone 6 Plus. Comparing all three phablets, we would say that Xiaomi has actually found the best balance between aesthetics and handling: curving just the back edges of the device gives you a soft, ergonomic curve for your palm to wrap around, and yet still leaves a flat side edge for your hand to grip onto. 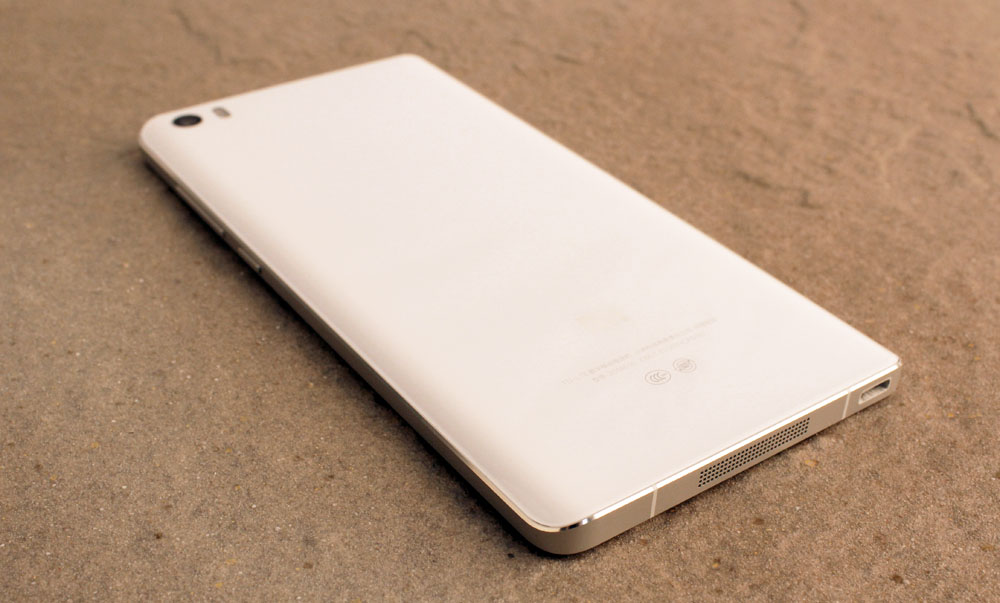 With glass on the front and rear, there are understandably concerns regarding the durability of the Mi Note, but the phone feels solid enough, and both the front and rear panels seem sturdy and strong. Additionally, during Lei Jun's presentation, he showed a video clip of the phone being dropped and having a steel ball dropped on it, which should help allay some fears. Nevertheless, Xiaomi is offering users a 199RMB annual insurance to cover screen damage plus glass damage for both sides of the phone, as well as accidental liquid damage for clumsy users.

At the bottom of the Mi Note, you'll find the speaker grille, which looks a bit like the old iPhone 4 and 5 speaker grille, comprising of rows of small holes. You'll also find the micro-USB port here. 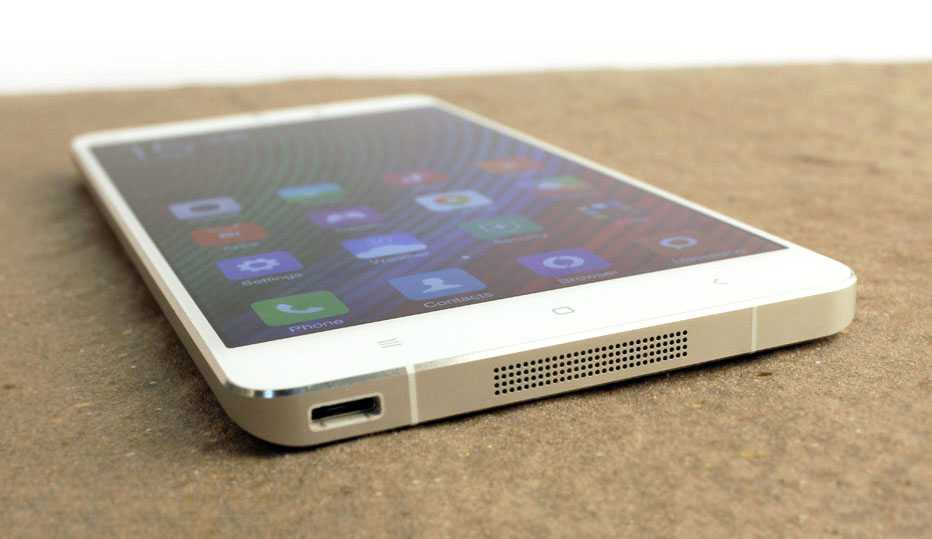 Unlike the iPhone 6 Plus, the headphone port can be found at the top of the device.

Both the volume rocker and power button can be found on the right side of the Mi Note. The rounded, oblong buttons are thinner than the buttons on the 6 Plus (to fit into the skinny side edge) but are otherwise very similar in style, although the Mi Note does use a one piece volume rocker, rather than the individual up/down volume buttons favored by Apple.

On the left side you'll find the dual- micro and nano SIM card tray. While dual-SIM phones are nothing new, a 2-in-1 micro/nano SIM card tray is fairly novel. Both SIM card slots support TDD-LTE and FDD-LTE cellular systems, so you'll be able to use Singapore’s LTE network using either SIM card. Within the settings menu, you can toggle between SIM cards or turn each on/off individually. 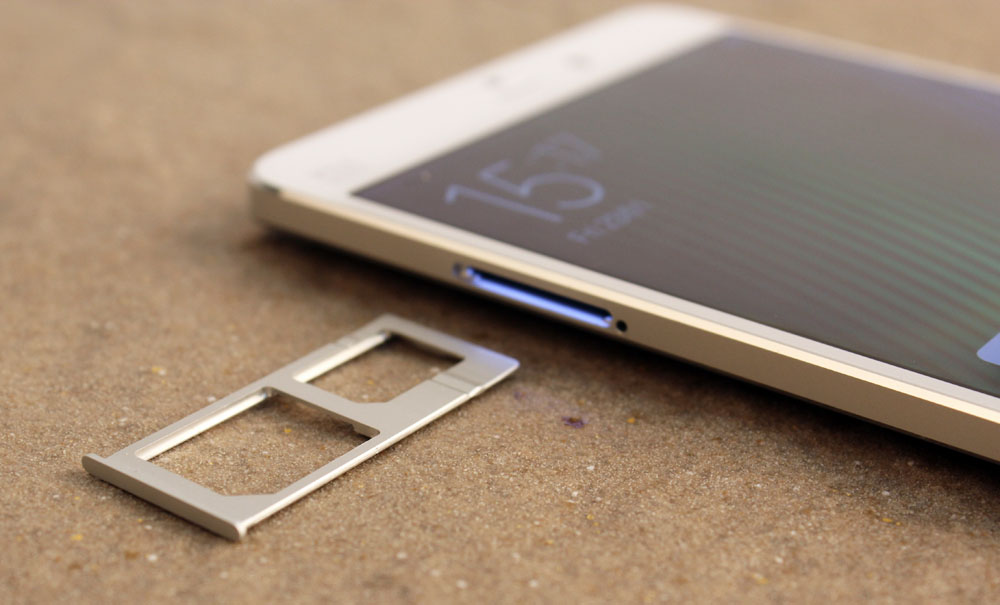 The Mi Note boasts a 5.7-inch Full HD 1920 x 1080 (386ppi) pixel resolution display made by Sharp/JDI. The negative LCD panel boasts a 95 percent NTSC color gamut and a contrast ratio of 1,400: 1. It's even capable of local tone mapping at a per pixel level. As a result, the screen is crisp, and pictures look fantastic, with deep contrast and vivid but not over saturated colors. 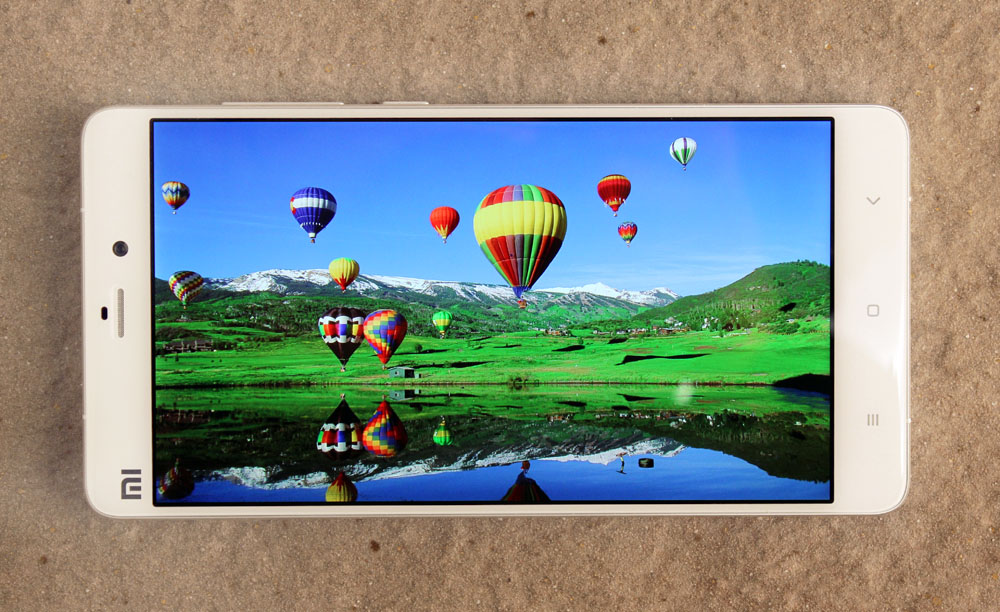 Both color and contrast can be adjusted in the settings menu, although unfortunately, there are no slider options, so you can only pick from a few preset options. If there's one complaint we have with the display, it's that viewing angles could probably be a bit better. Head on, the screen is blindingly bright, but that falls off quickly when viewed off angle. 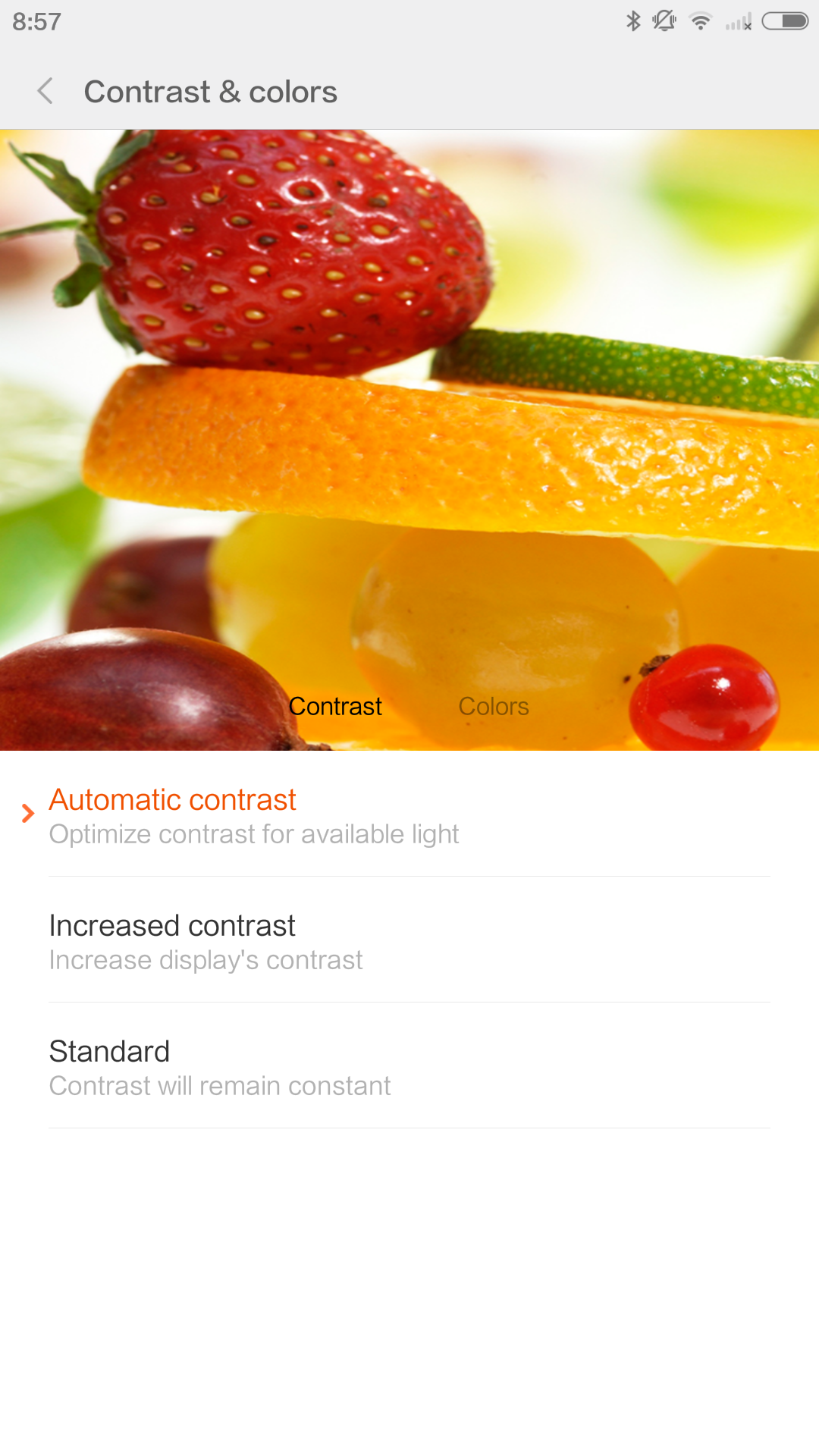 Surprisingly, Xiaomi has paid a lot of attention to the audio capabilities of the Mi Note. Inside, you'll find an ESS ES9018K2M stereo digital-to-analog converter (DAC), dual ADI ADA 4896 op-amps, dual Texas Instruments OPA1612 op-amps, and two independent 44.1kHz and 48kHz clock oscillators. All of this makes the Mi Note a very capable high-res (24-bit/192kHz) audio player. Paired with a reasonably decent pair of headphones (my Audio-Technica M50x's) and some 192-bit AAC music tracks, I was very impressed by the sound quality coming out of the Mi Note. While I'm certainly no audiophile, the difference between the Mi Note and my iPhone 6 was readily apparent.

As for the actual speakers on the Mi Note, audio is impressively loud, but lacks depth and bass. The one-directional quality of the audio also makes it less than ideal for landscape-mode movie watching.

The Mi Note runs on Android 4.4 KitKat with MIUI 6 installed. MIUI 6 also seems to take several cues from iOS 7, in terms of design, functionality and app layout. Drag down from the top of the screen and sure enough, there's a notification center with a pseudo transparent screen effect. Even specific apps like the calendar and calculator bear a striking resemblance to Apple's own. Nevertheless, MIUI 6 actually works really well. It's fluid and responsive, and everything is easy to navigate and use. 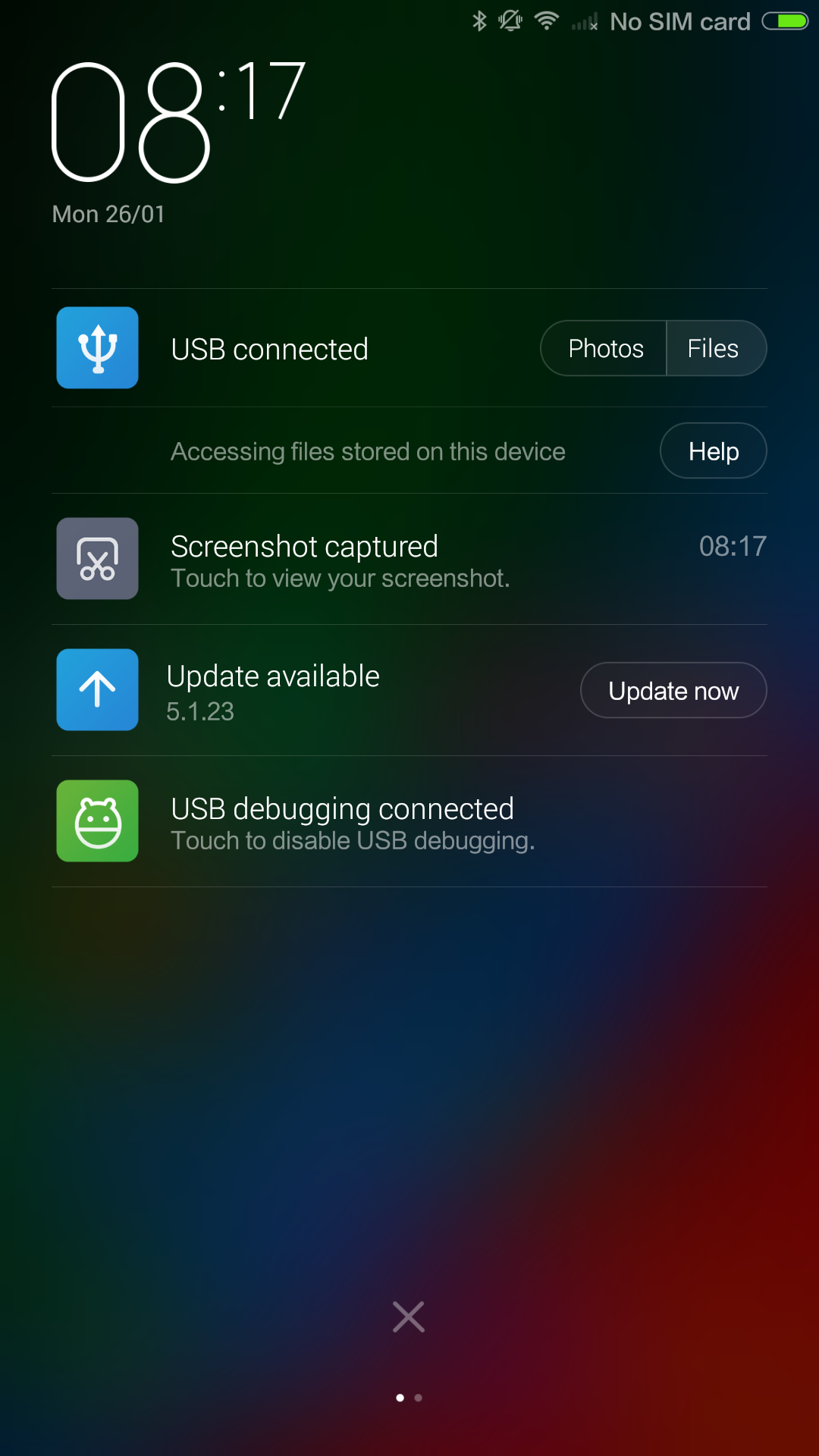 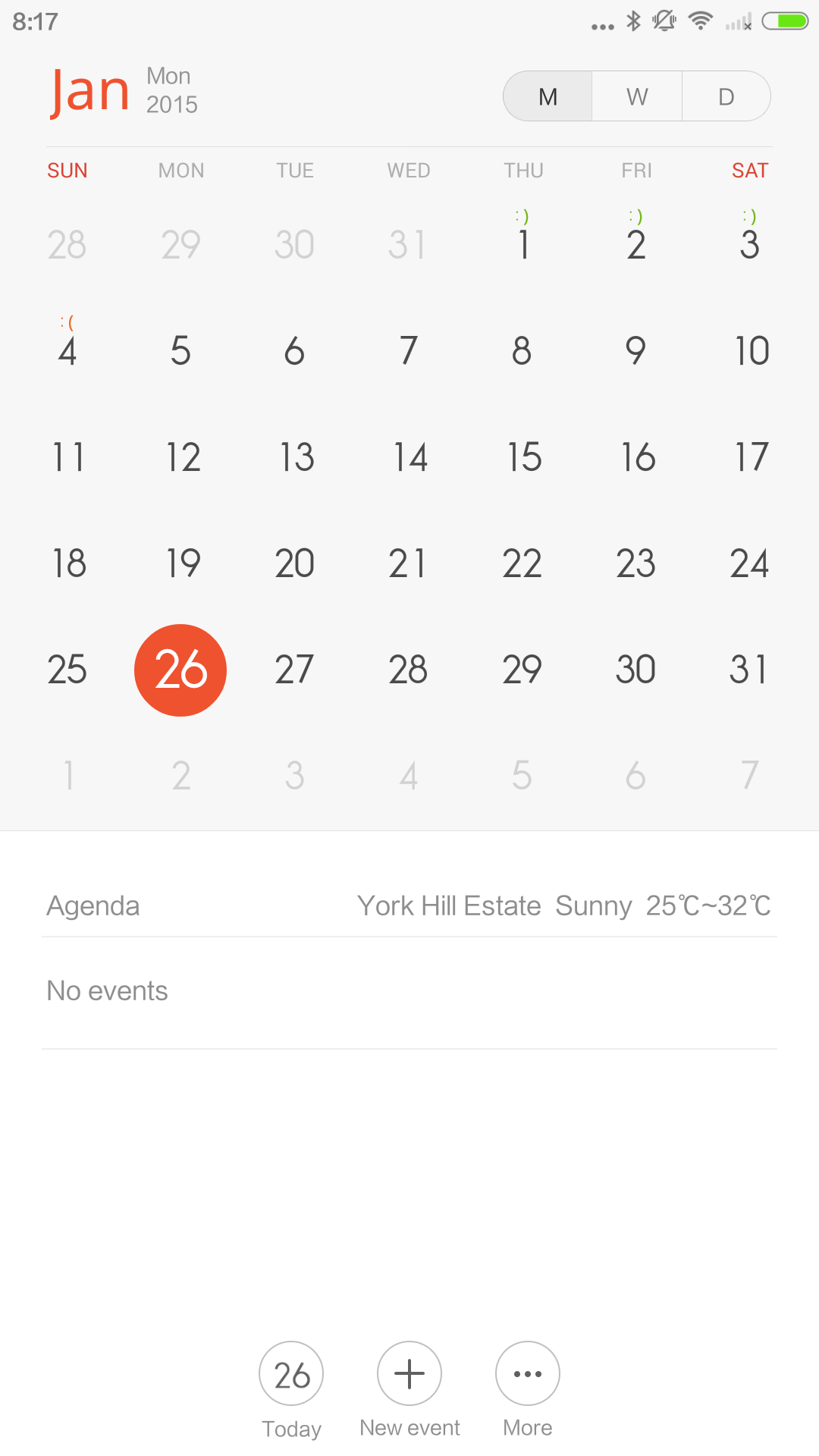 As with many phablets, there's also a one-handed mode that shrinks the size of the display. Just swipe left or right on the Home button to shrink the screen and pull it closer to that side. You can select from 3.5-inch, 4-inch, and 4.5-inch screen sizes.

It's worth noting that unlike Xiaomi's other devices, the Mi Note doesn't offer any expandable storage. On the plus side, even with MIUI 6 installed, Android 4.4 is fairly lightweight, so even on the 16GB model, you have about 11GB storage left to play with. Having said that, if you can afford it, you're better off springing for the 64GB version. 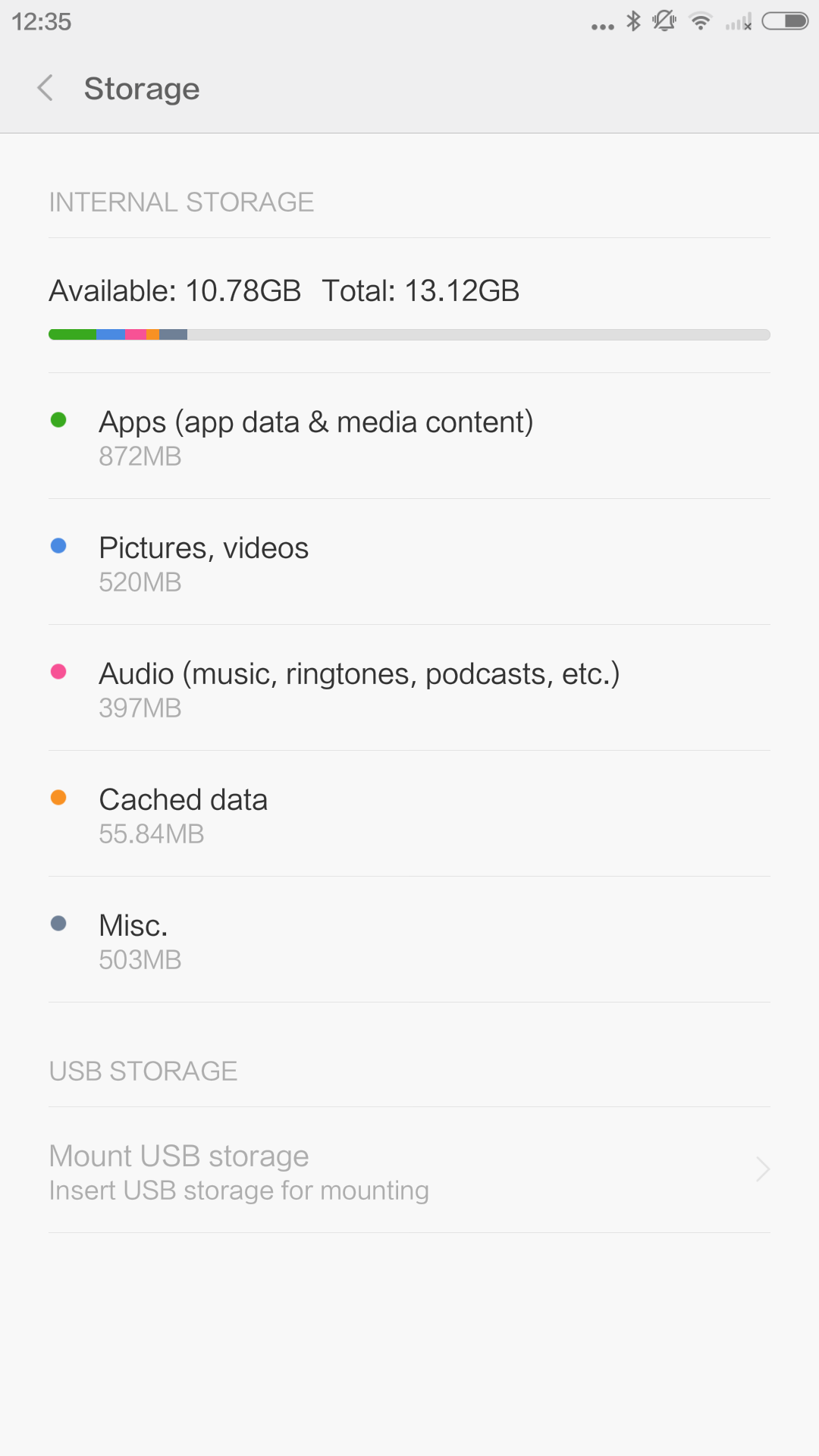 Write a Review
Compare This | Specifications
Sleek aluminum and glass build with good handling
Great camera with optical image stabilization
Good performance and battery life
Dual 4G micro and nano SIM
Nearly half the price of an iPhone 6 Plus
Onboard stereo DAC
No expandable storage
Our articles may contain affiliate links. If you buy through these links, we may earn a small commission.
Sponsored Links