Whether MIUI has aged well is the subject of much debate, but at least in its 11th iteration, and layered atop Android 10, it's quite acceptable aesthetically:

Two things, though. First, although it's been talked about before, the sheer number of ads in MIUI's system apps always comes as a rude shock: Browser, File Manager, Mi Music and Mi Video...

You can turn them off (look for "Recommendations" within the relevant apps...

It's not about the ads themselves, but the fact that Xiaomi is collecting gobs of user data from them. And on that note…

MIUI’s battery management is just as annoying. We received notifications from several apps that task killers were interfering with their proper operation...

So is there any good in MIUI versus, say, stock Android? Yes: themes and customisations like scrolling screenshots, various creature-comfort apps like a good screen recorder and QR code scanner. Also, Xiaomi seems to be pretty fast with the updates; our Mi Note 10 was already on the January 2020 security update as of a few days back.

Is a high-end midrange processor good enough for a groundbreaking phone? Are benchmarks all there are to performance?

Hold those thoughts as we explore how the Mi Note 10 and 10 Pro do in our usual tests. The 6GB of RAM on the former is bumped to 8GB on the Pro, but both phones have the same Qualcomm Snapdragon 730G chip under the hood, which offers close to flagship performance thanks to its two Kryo 470 Gold cores, the same kind found in 8-series chips.

In JetStream 2, which measures JavaScript performance across a diverse number of browsing situations, the Mi Note 10 Pro expectedly outperformed the non-Pro, with the extra 2GB of RAM coming in handy. 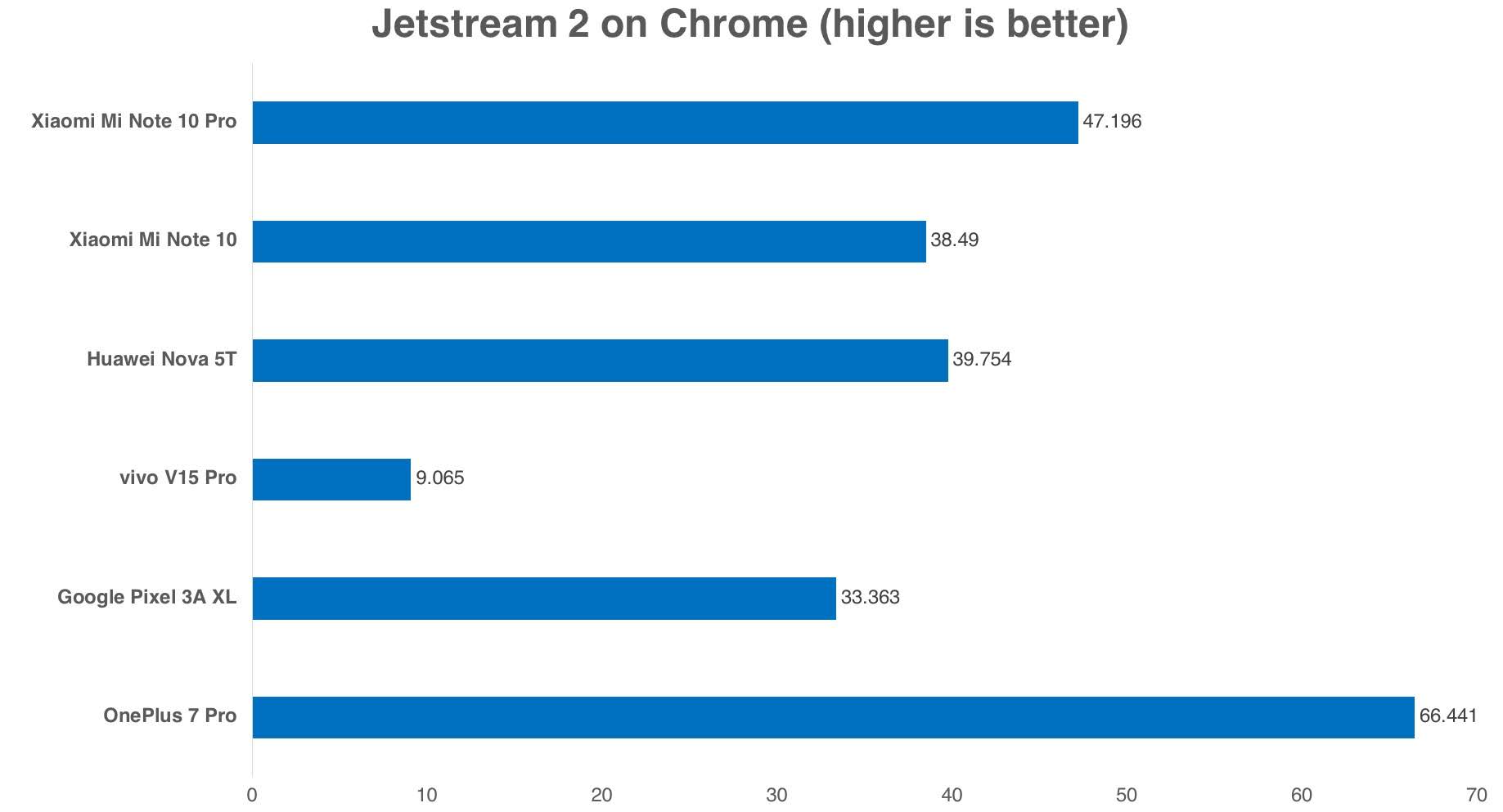 But in system benchmarks Geekbench and Antutu, however, the results were too close to call. In fact, Geekbench results were marginally better on the non-Pro than on the Pro. We'll put this down to differences in software optimisation, since the non-Pro received a software update just before the tests which included a January security update.

Likewise, 3D performance in 3DMark Sling Shot Unlimited was neck-and-neck on both phones.

We only tested the Mi Note 10 in our battery test, but any discrepancy between it and its Pro sibling is likely insignificant given its amazing battery life of over 1100 minutes!

Should you shell out for the Pro, then? After a month of use, I’ll say the Mi Note 10 appears to lag slightly more than the Pro, especially during web browsing with numerous tabs open. There were also noticeably longer delays in switching between apps on the non-Pro version.

But otherwise, both phones behaved almost indistinguishably from flagships, and this compliment testifies to the power of the Snapdragon 730G and its two high-end Kryo 470 Gold cores. Coming from a OnePlus 7 Pro, I've grown accustomed to its lightning-fast moves, and with both Mi Notes 10 I didn't feel as much of a step down as I thought I would.