Not much needs to be said about the Oreo-based goodness of Android One on the Mi A2. Stock Android and all the beauty that it brings - such as properly-working "OK Google" functionality even with the screen off - were the recipe for the Mi A1's success, and so it should be with the Mi A2. 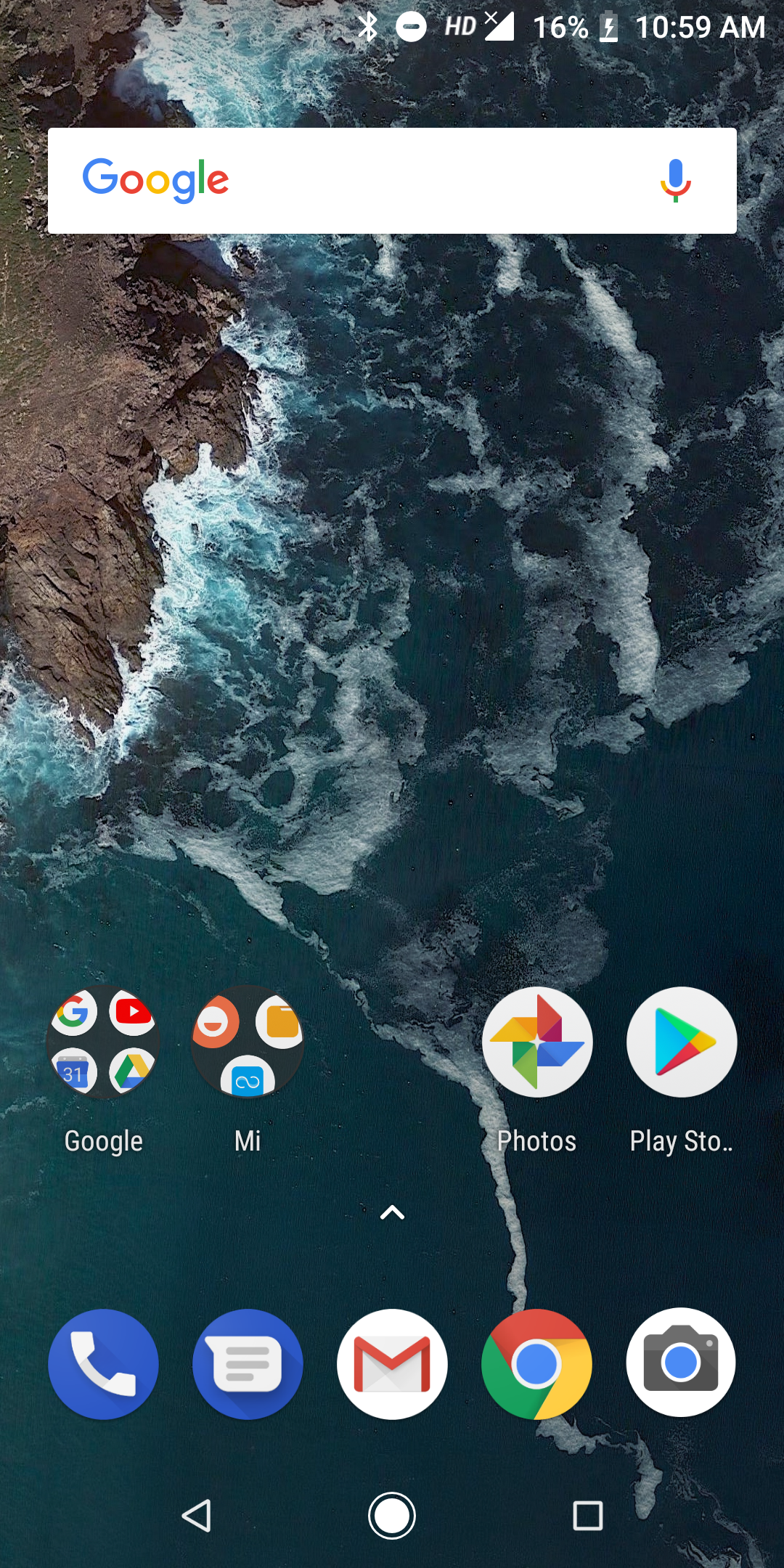 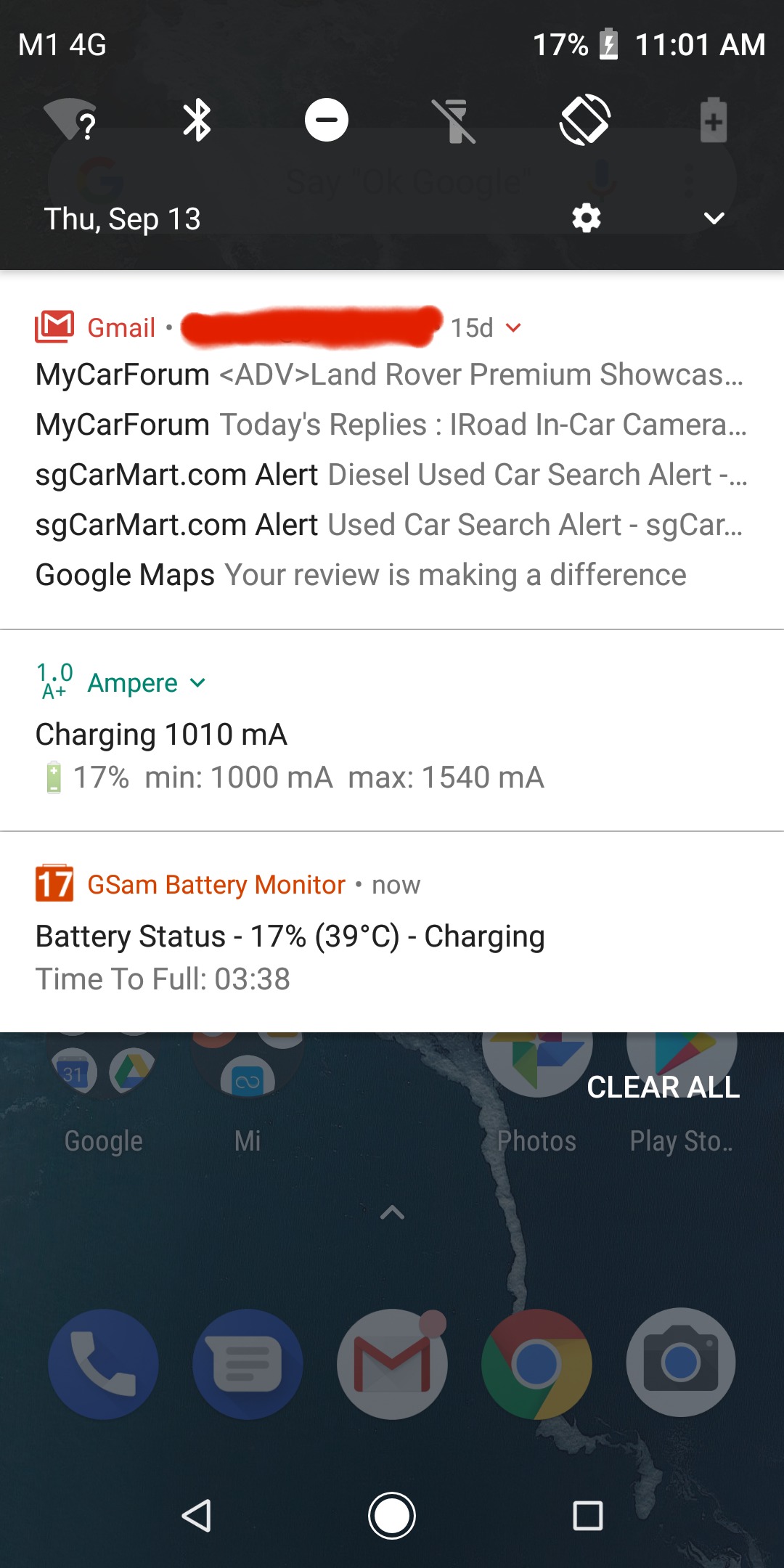 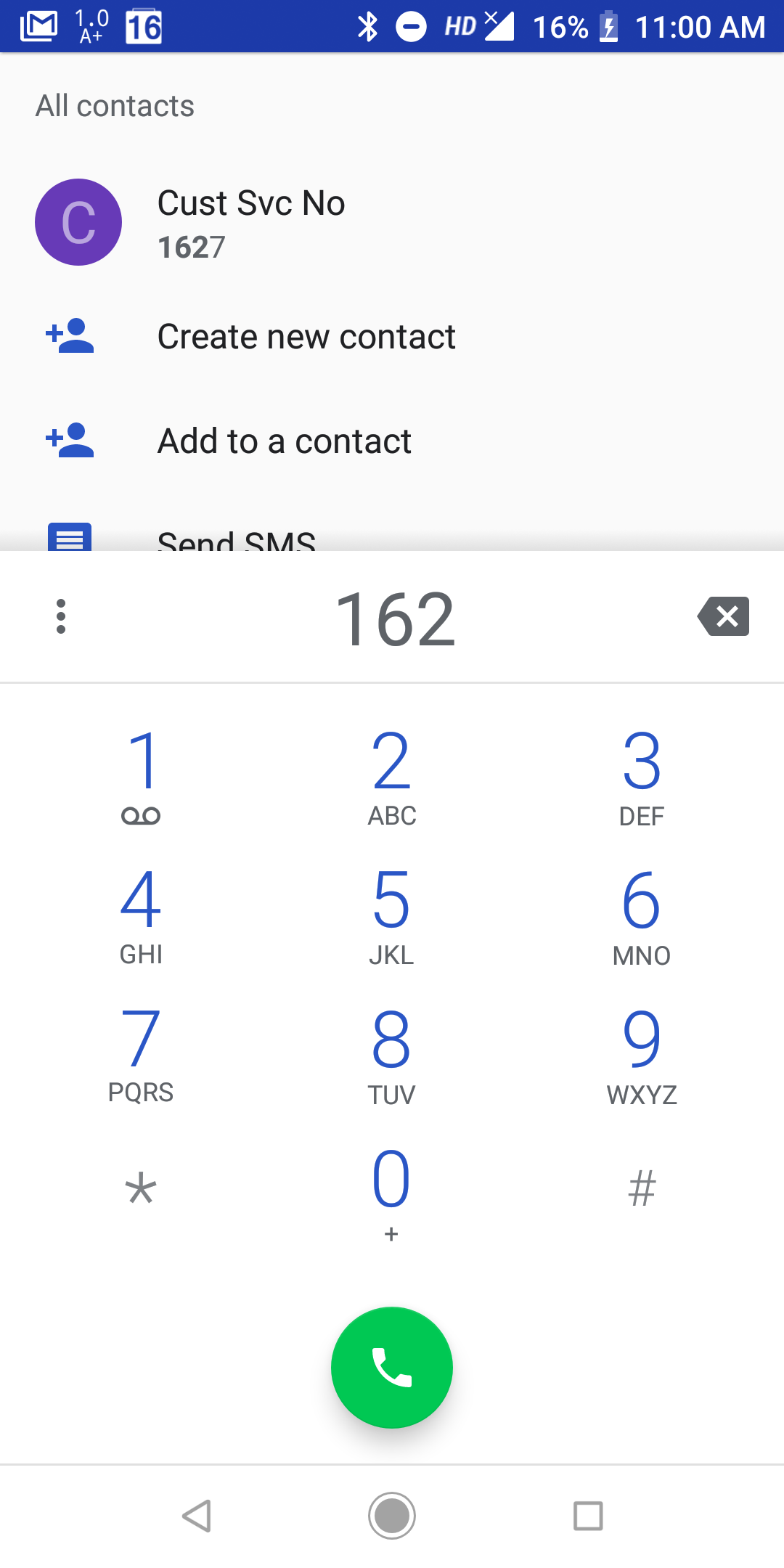 There are just a few Xiaomi apps, too, such as a Feedback app, a file manager, a Mi Remote app for controlling that IR blaster, and a Mi Drop file-transfer app. But the most important Xiaomi app is the camera app, which is also the only Xiaomi app that can't (and shouldn't) be uninstalled. 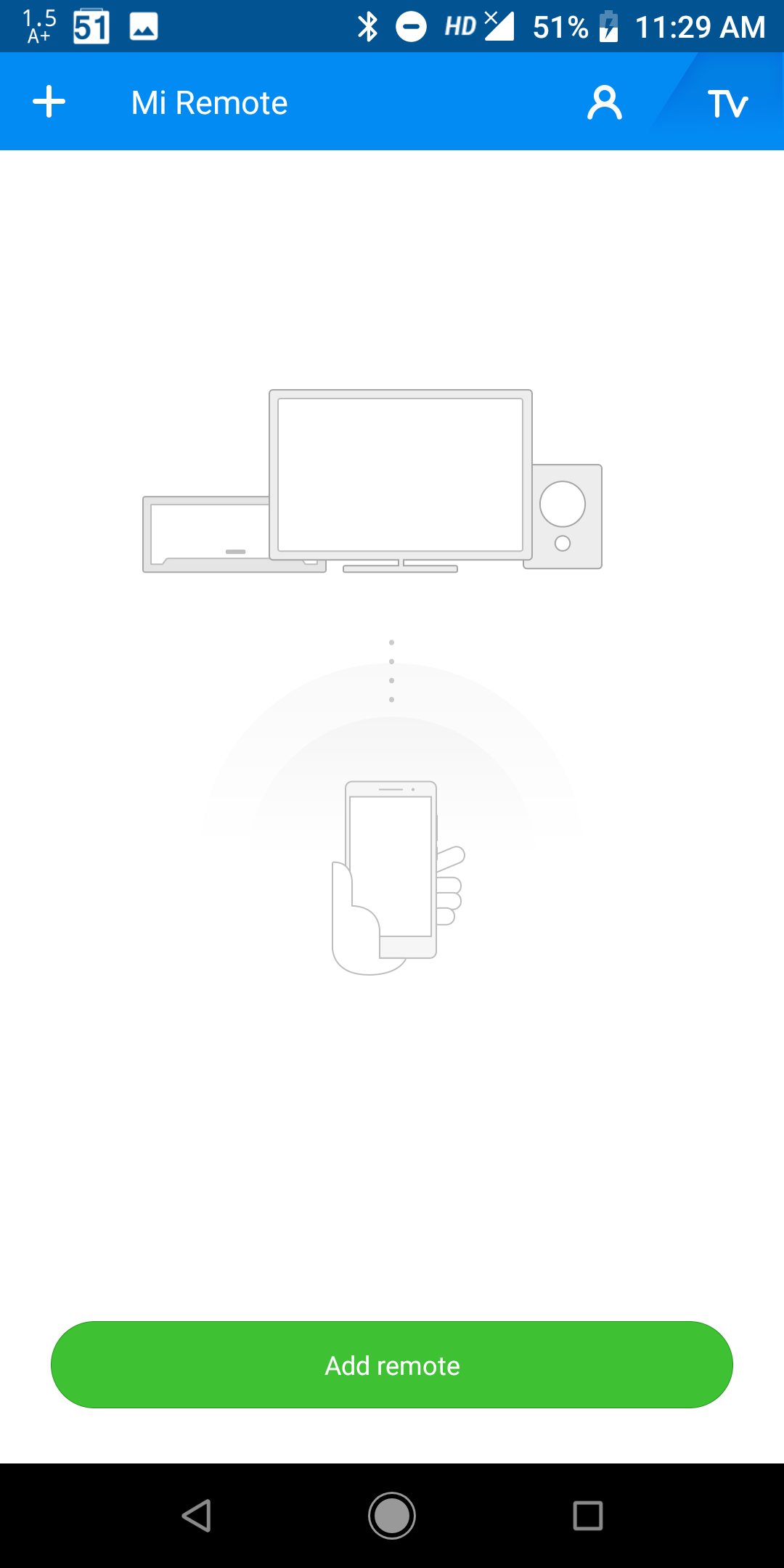 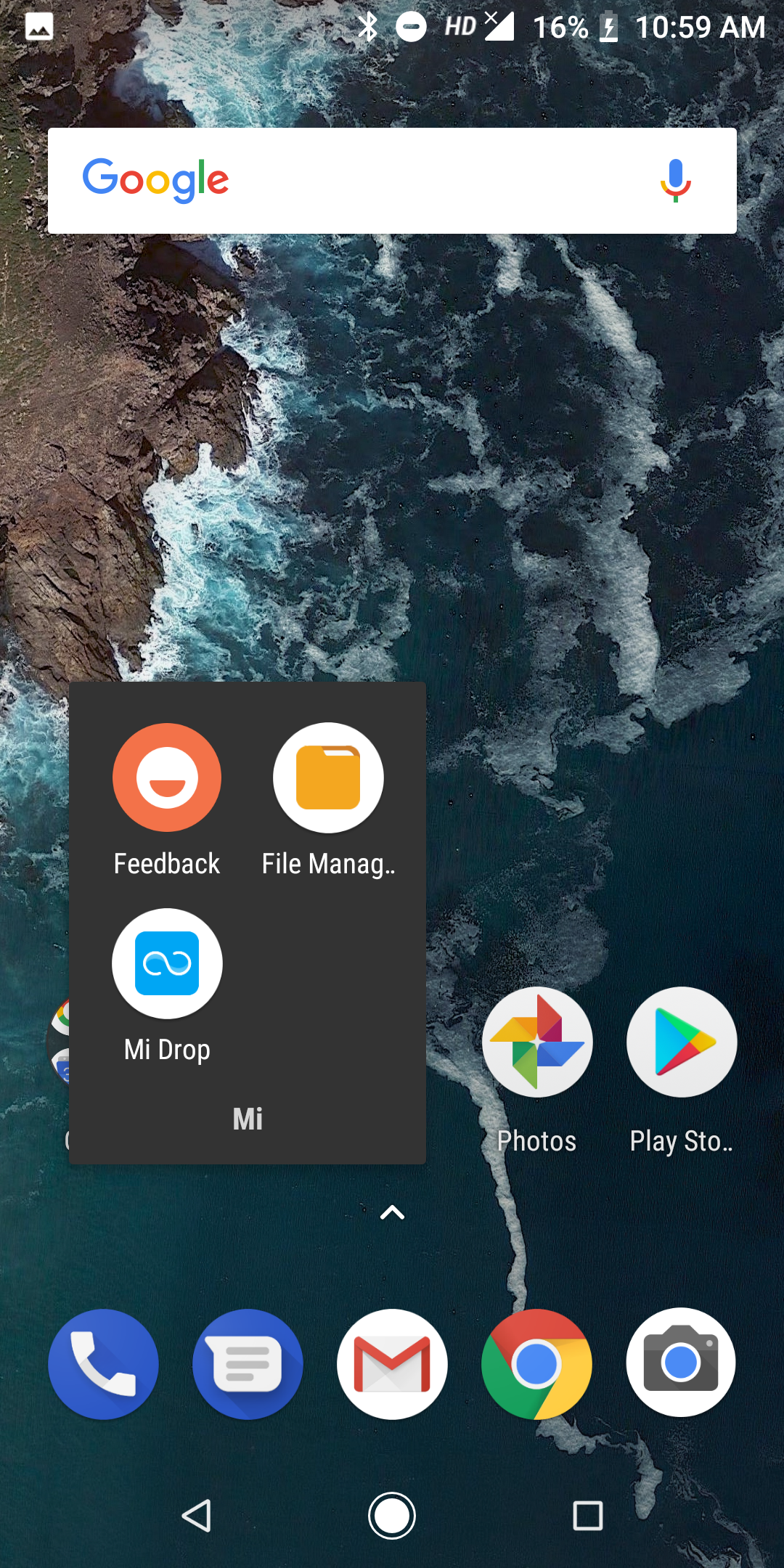 However, do remember that being Android One-based doesn't necessarily mean a phone is updated at the same speed or schedule as Google's own (Pixel) phones. We've seen several such devices, like the Nokia 7 Plus, that are pretty slow to receive updates. Also, the performance of certain hardware components may be affected by the drivers or apps they provide, and for those you'd have to trust the manufacturer for solutions. Caveat emptor!

Another observation: face unlock doesn't work - and hasn't worked - in the Mi A2 or any of the Android One phones we've tried to date, for some inexplicable reason. Under the Smart Lock setting in these phones, there's always the option to add a "Trusted face",  but the phone doesn't even attempt to scan it when the power key is pressed. 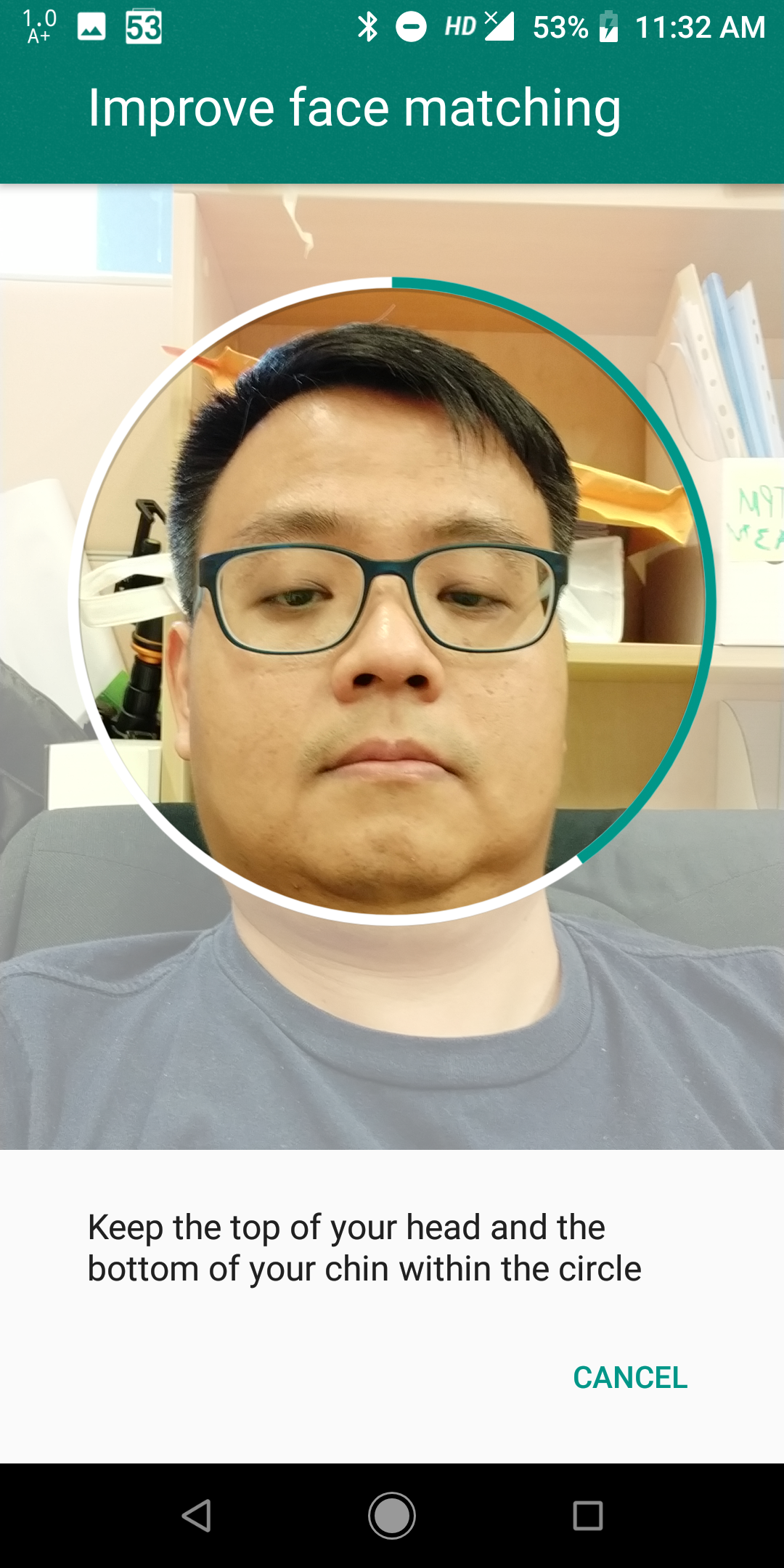 With a Qualcomm Snapdragon 625 providing the tractive force, the Mi A1 proved to be a solid, if uninspiring, performer.

This time around, Xiaomi has gone for the jugular and plumbed in a Snapdragon 660, which is as different from the 625 as day from night, for it employs Qualcomm's custom optimized Kryo cores instead of stock ARM Cortex A-series cores, for which Qualcomm claims a 30% performance improvement. The 660 also features the latest Adreno 512 GPU, which is clocked at 800MHz against the Adreno 506's 650MHz on the Snapdragon 625.

All this means that the Mi A2 feels and behaves almost like a first-generation Pixel. Apps open with delays that are no longer irritating, and there is a marked decrease in the amount of micro-stuttering when browsing the web. The benchmarks back up these anecdotal observations, too.

For our comparison, we've put together a motley crew of devices that either share the Mi A2's performance or price point: the Snapdragon 660-equipped vivo X21 which costs about S$200 more, Xiaomi's own Redmi 5 Plus, and of course, the original Mi A1.

Let's start with SunSpider, which measures JavaScript processing performance. SunSpider takes into consideration not just the underlying hardware performance, but how optimized a particular platform is in delivering a high-speed web browsing experience.

The gap is not actually huge between the 660 devices and the 625 ones: 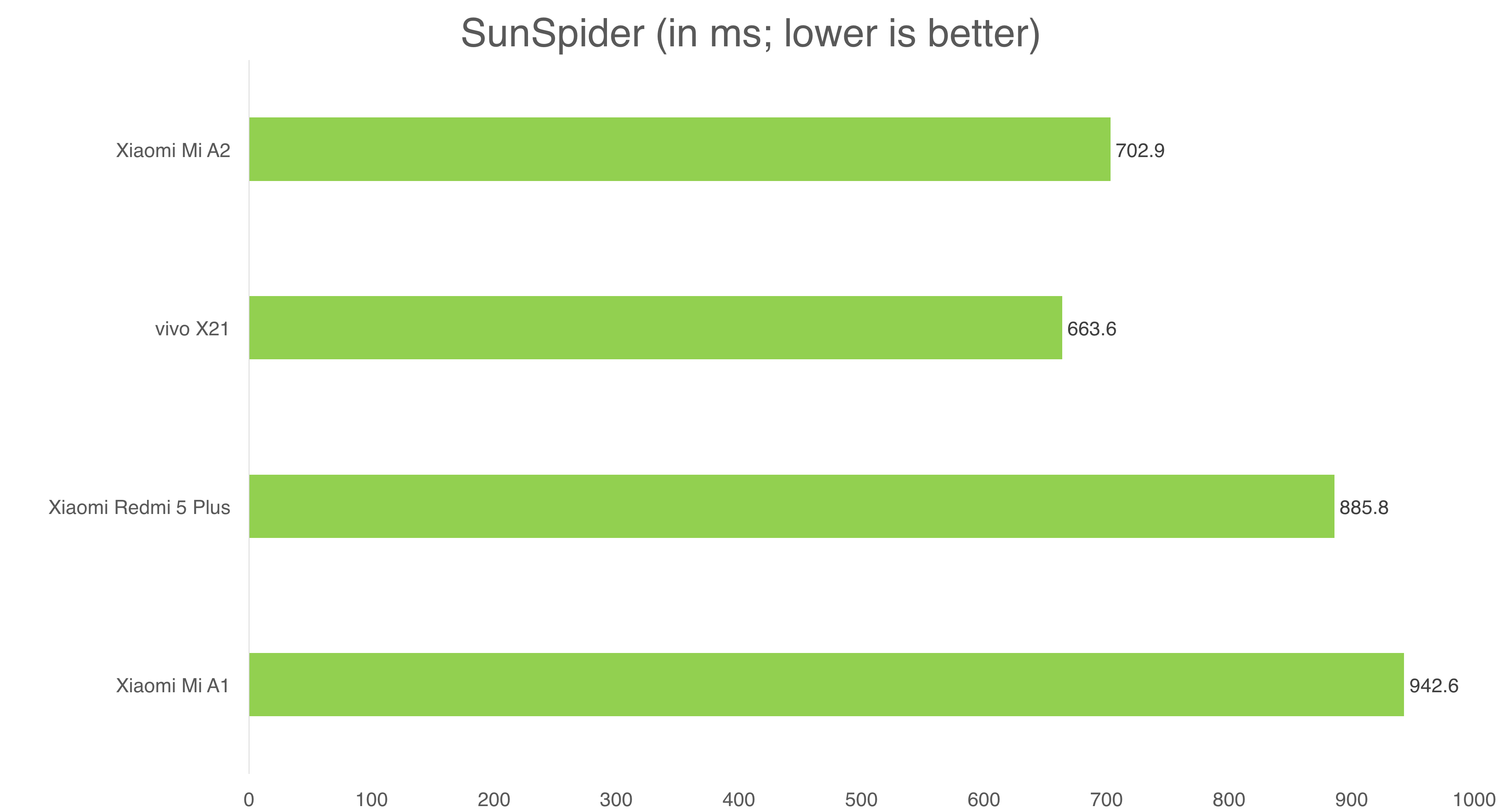 BaseMark OS measures overall system performance over a number of different metrics. And with a stock Android build, the Mi A2 is once again caught napping by nobod...  wait, the vivo X21? Given that this is a budget device, perhaps slow RAM is to blame.

The original A1's Snapdragon 625 processor is based on Cortex-A53 cores, which, while no ball of fire, were admittedly parsimonious enough to support a full day of moderate use. With a faster Snapdragon 660 and a bigger 6-inch screen, Xiaomi has instead chosen to cram a slightly smaller battery (3,010mAh) in the A2. 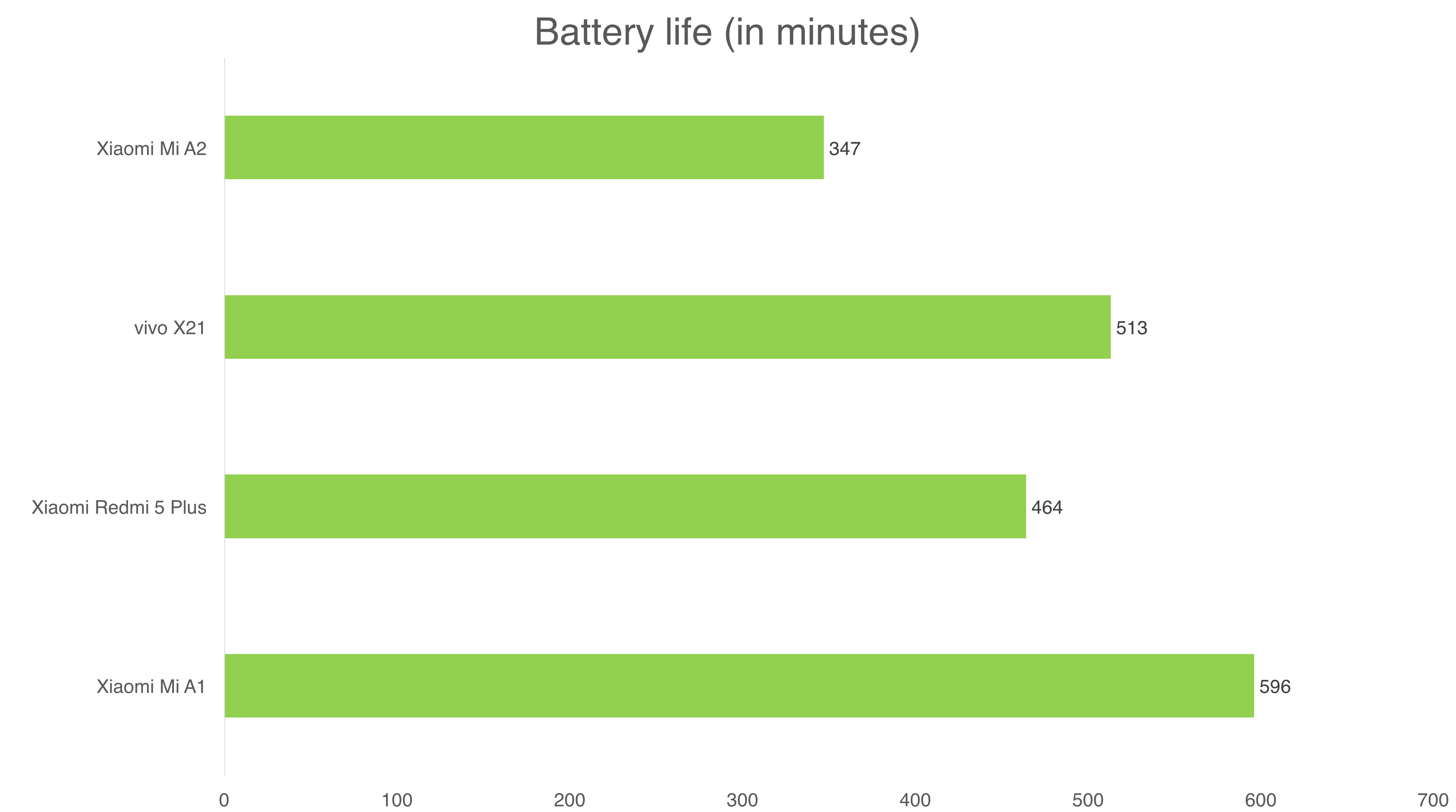 On our standard battery test where we've to:

...the Mi A2 turned in a battery life figure of just under 6 hours.

To obtain more real-world use statistics, we fired up GSam Battery Monitor to test the device in an even more media-focused usage scenario. Our suspicions were further confirmed: over about a half-hour period of which about 70% was YouTube, some photography, and web browsing, power consumption ran as high as 10% per hour.

In day-to-day use, we were able to eke out a little more than 12 hours - which meant that unplugging the phone at 7am would see it entering battery saver mode at about 6pm. Over the weekends, when we had more free time on our hands, this easily happened around 3pm. This writer will go out on a limb and say that he hasn't seen such poor battery life from a recent-model smartphone.

To make matters worse, there's no USB Power Delivery or Quick Charge fast charging support on the Mi A2. 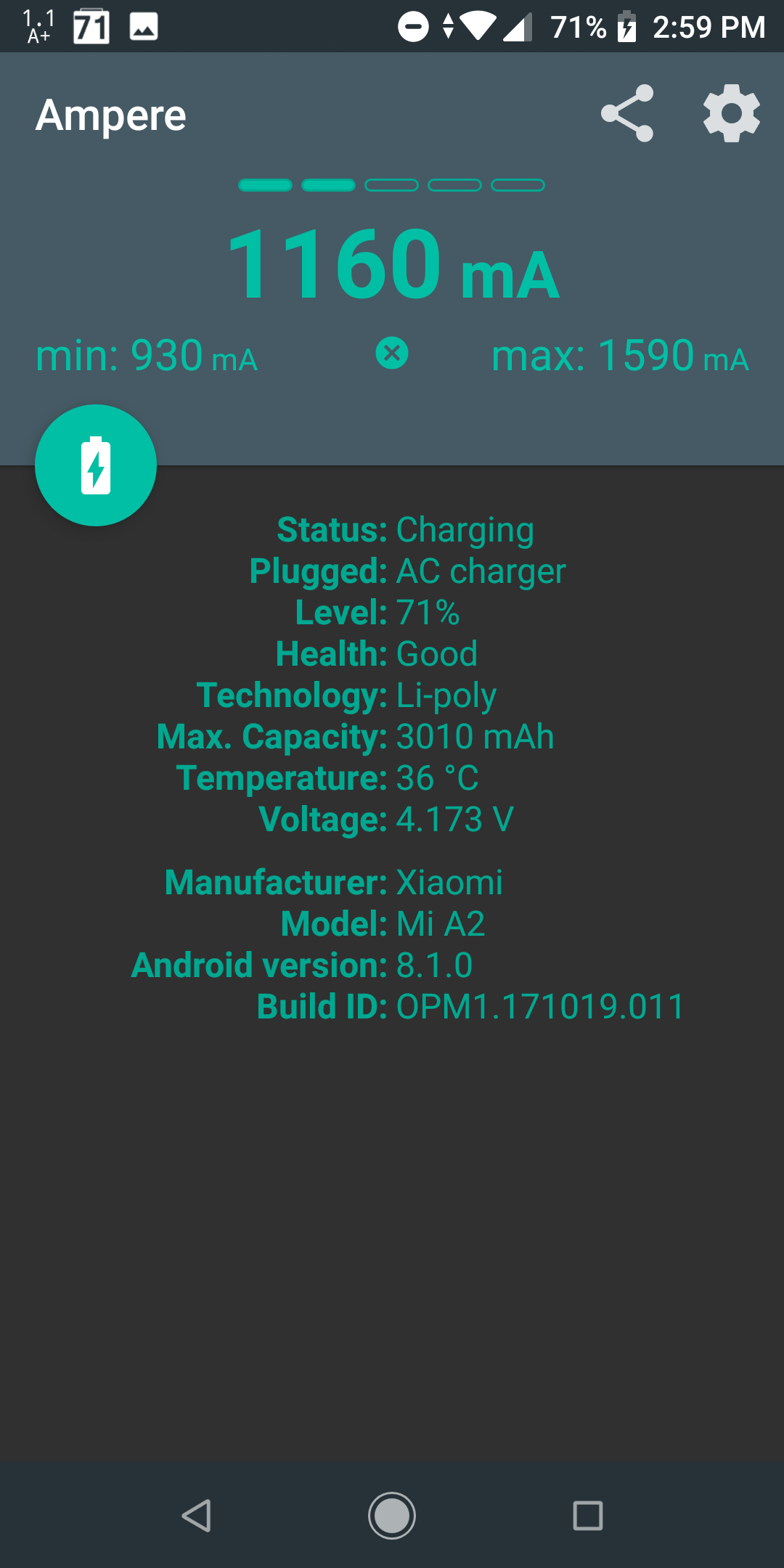