Xiaomi Mi 11 review: A 2021 flagship phone in an affordable package 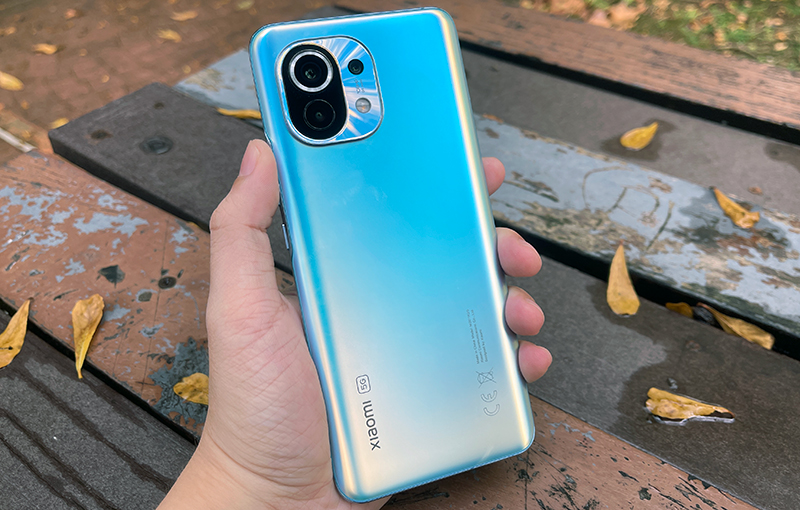 Turning affordable flagship phones up to 11

Xiaomi’s taking on 2021 with its latest flagship model for Singapore, the Xiaomi Mi 11.

Actually, the Xiaomi Mi 11 is one of the flagship variants of its entire Mi 11 range. Other alternatives are Mi 11 Ultra, Mi 11i, and Mi 11 Lite, with the Lite version packing a mid-range chipset instead.

Mi 11 has all the core features of what Xiaomi wants to offer in its flagship, without some of its over-the-top features from the Mi 11 Ultra. For instance, Mi 11 doesn’t have the secondary AMOLED display for date/time notifications, nor does it have a multi-point direct ToF laser focusing system for its camera’s autofocusing needs. 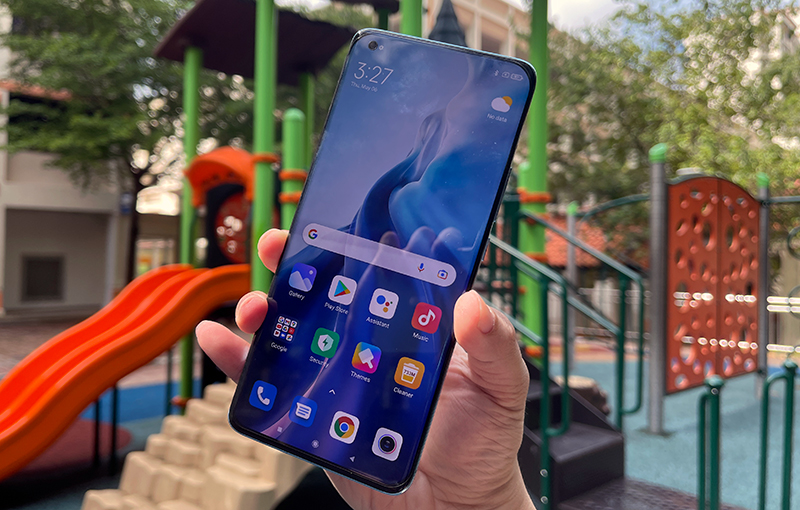 Outside of the bell and whistles, the Mi 11 does offer everything one would expect from a 5G-capable, flagship-grade phone. We’re looking at a Qualcomm Snapdragon 888 chipset underneath its HDR10+, 6.81-inch, 1440p resolution, 120Hz refresh rate AMOLED display. It also has an in-display fingerprint sensor and dual Hi-Res Audio-certified speakers tuned by Harman Kardon. The triple rear camera has a 108MP primary sensor. It supports the latest Wi-Fi 6 and Bluetooth 5.2 wireless profiles and even NFC (oddly not mentioned in its official specs list). It even takes two physical Nano-SIM cards with its dual SIM configuration.

Together with its battery features and the latest Android 11 operating system lurking beneath MIUI 12, the value of the Mi 11 poses a threat even against its very own Ultra variant, even if the specs seem like ‘regular’ specs of flagship phones from 2020.

But, will the Xiaomi Mi 11 be able to stand out against its closest Android rivals? Let’s find out. 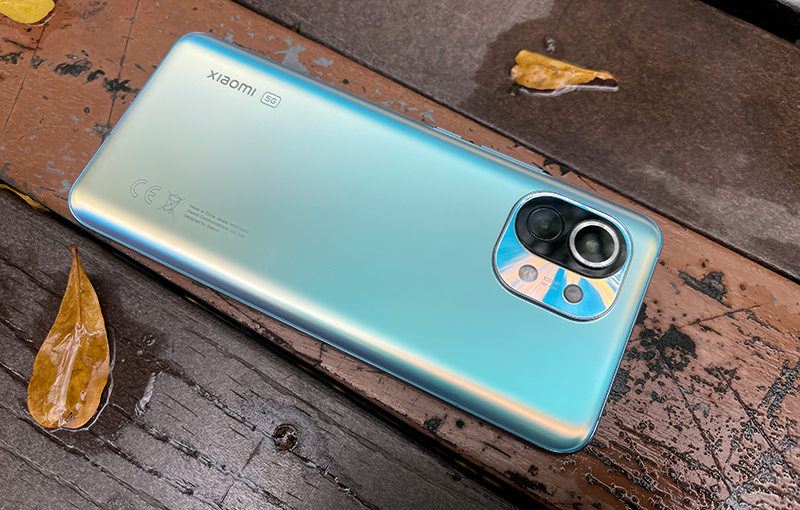 Xiaomi’s choice of a frosted-looking plastic back isn’t a new design for flagship smartphones - it’s awfully simlar to recent OnePlus models. Still, we can’t deny it looks decent. They’ve also put in considerable effort to ensure that the metal frame comes in a matching shade, which shows a little more attention to design details. 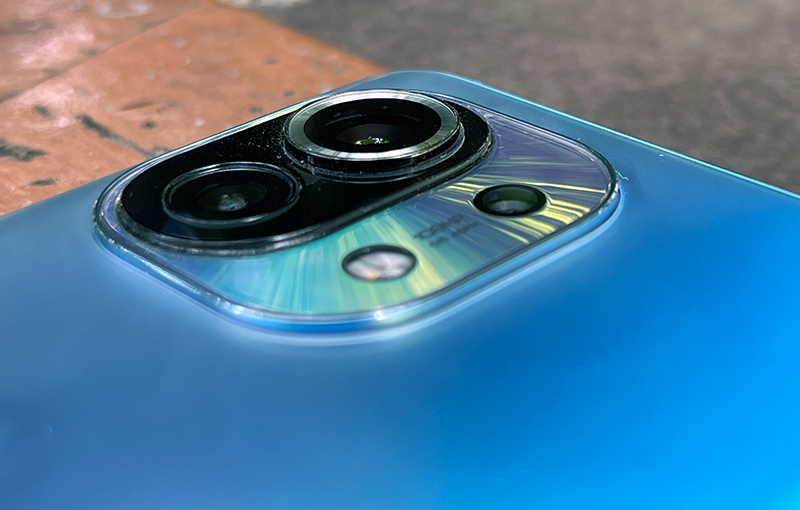 The rear camera housing also saw extra design effort, but we’re on the fence about how nice it looks. Two of the lens cutouts have an additional raised housing around it, while the entire rear camera array sits on yet another raised platform, which in turn sits on the rear of the phone. This brings multiple protrusions to an otherwise well-made phone. Fewer bumps should’ve been the way to go, not more. For instance, Oppo Find X3 Pro used a sloped contour design to hide rear camera bumps. All that doesn’t yet touch Xiaomi’s jarring colour choices and discontinuity between materials for the Mi 11’s rear camera housing. 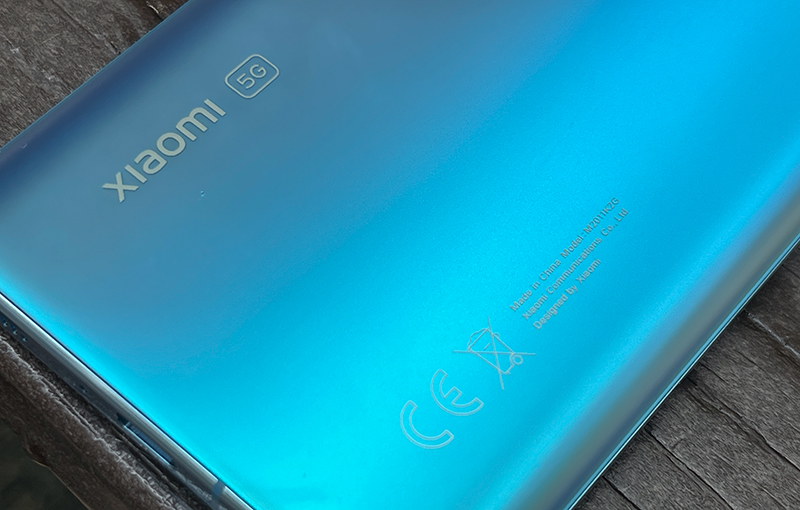 We’re nitpicking, but the phone’s design would’ve been even better and more premium-looking if not for the regulatory logos on the rear - Xiaomi already has its logotype emblazoned there, so the additional “Designed by Xiaomi” and all the text and symbols around it felt unnecessary. 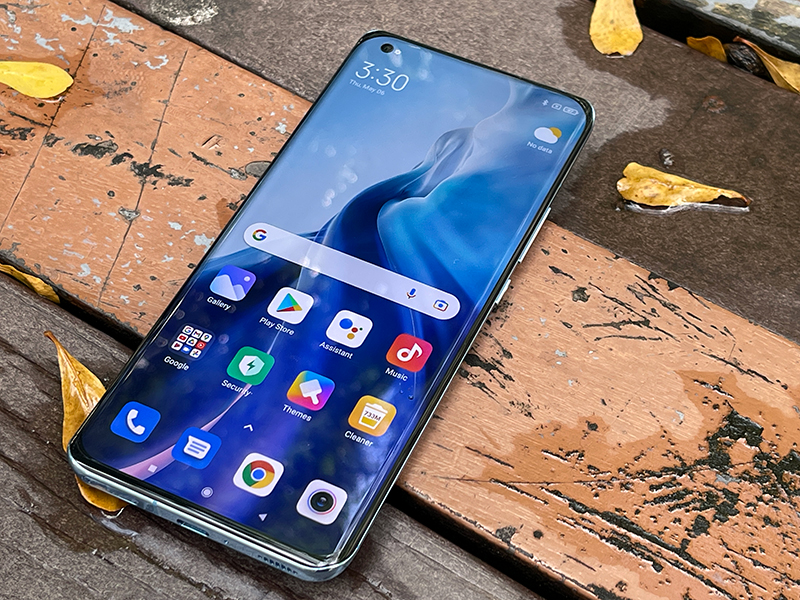 Over at the front, the Mi 11’s quad-curved display actually looks and feels more like a flat display. This is a nice compromise between having a premium appearance (curved look) while retaining the practicality of a flat panel (fewer instances of unintended touch input). 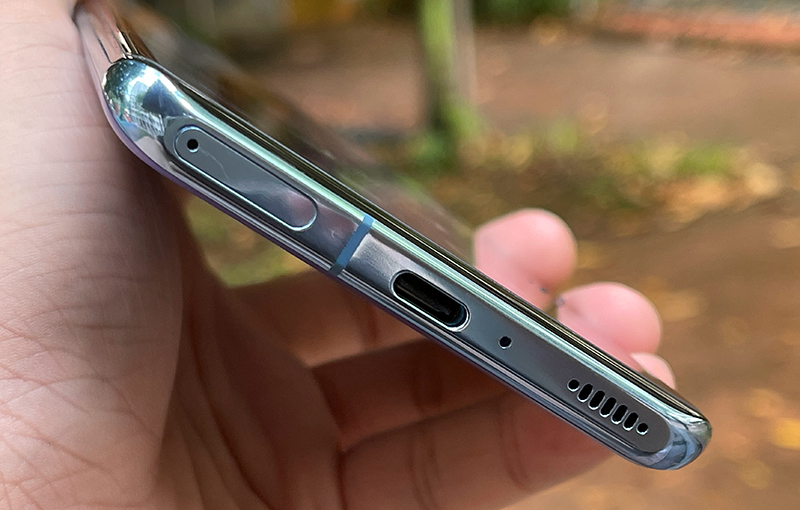 While it doesn’t have ultra-thin bezels like the Galaxy S21 series, it’s only visible on the corners, top, and bottom rungs. All other inputs and physical features (SIM card slot, speaker grilles, USB-C port) are blended into the sides, with no extra protrusions beyond its physical power/lock button and volume rocker. 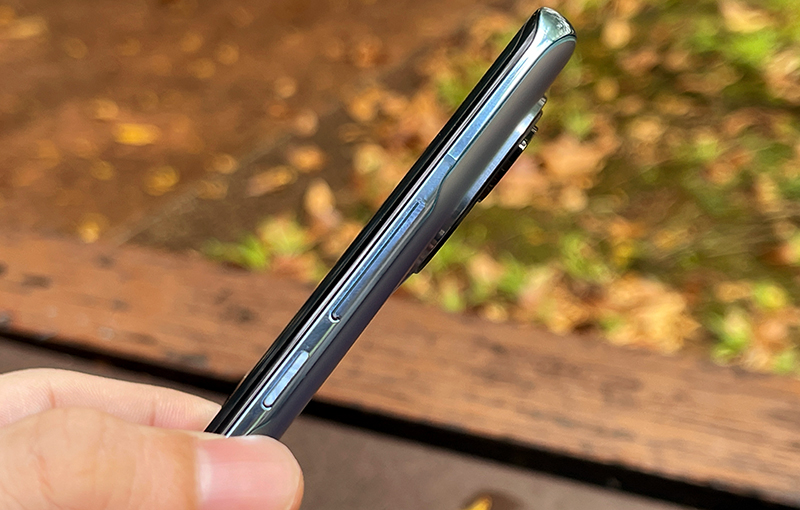 There are no major issues with the phone’s handling since it’s sized similarly to most other flagship Android smartphones with a large screen. However, it can be tricky manipulating its physical buttons because they are super thin to the touch. 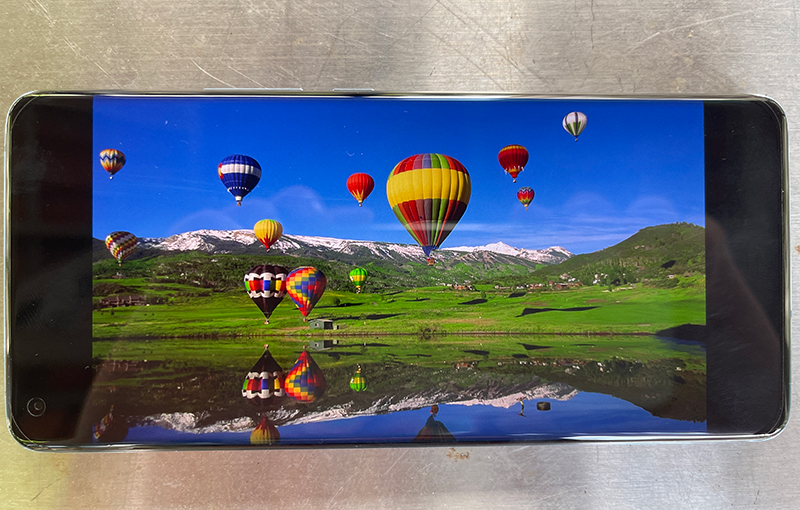 The Xiaomi Mi 11 sports a 6.81-inch, curved AMOLED DotDisplay (which just refers to the cutout for the front camera) rated at 3,200 x 1,440 pixels resolution (WQHD+) and 120Hz refresh rate. Certainly respectable specs, but the display packs even many features that make it worthy of its flagship-tier status.

Specifically for the Mi 11 is its HDR10+ certification, 100% DCI-P3, and a 480Hz touch sampling rate. In a nutshell, it’s capable of playing back HDR10+ content from Netflix and Disney+, has insane colour accuracy, and is extremely responsive to inputs which should satisfy phone gamers.

(Note: HDR10+ support on Xiaomi Mi 11 is not yet listed as supported on Netflix’s website, but its past Mi phones have always supported the format. Disney+ supports it as long as your device can do so.)

If you have neither streaming services, fret not - Mi 11 also comes with built-in 2x upscaling for videos. That means video content at 360p is automatically played back at 720p, and 720p plays back at 1440p, and so on. Subsequent OTA updates from Xiaomi will also make the Mi 11 support 3x upscaling for specific resolutions. 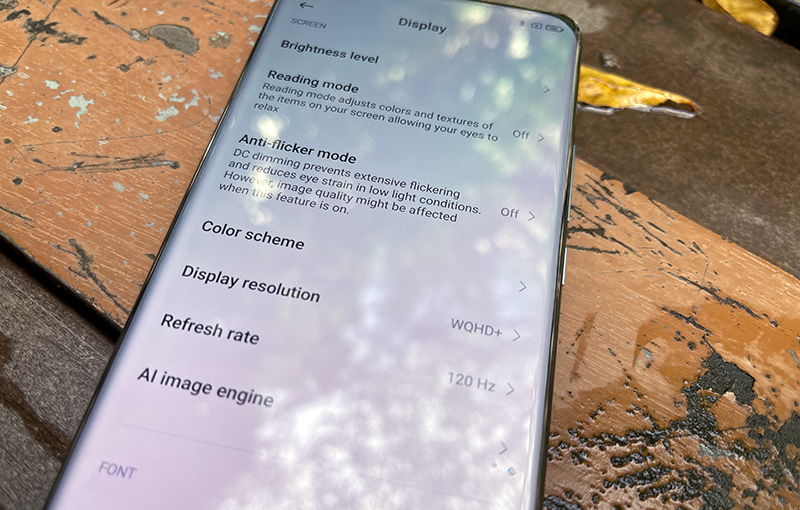 Other interesting features are its anti-flicker toggle that reduces screen flickering in low-light conditions, along with Reading Mode. Both options are made with eye comfort in mind, so not everything about the Mi 11’s display leans towards power and delivery. Oh, and if you really want a 120Hz refresh rate, don’t forget to head into the Settings app to turn it on, since it’s set to 60Hz by default.

All in all, the viewing experience on Xiaomi’s higher-end devices have come a long way since its initial maximum-value-for-minimum-money approach, where it simply used to be a high-resolution screen on an affordable device. You’re getting an accurate-looking display at a 120Hz refresh rate with decent audio quality to match. It’s a tired pun, but we’re happy to say Xiaomi took its display customisations and performance up to 11, this time around. 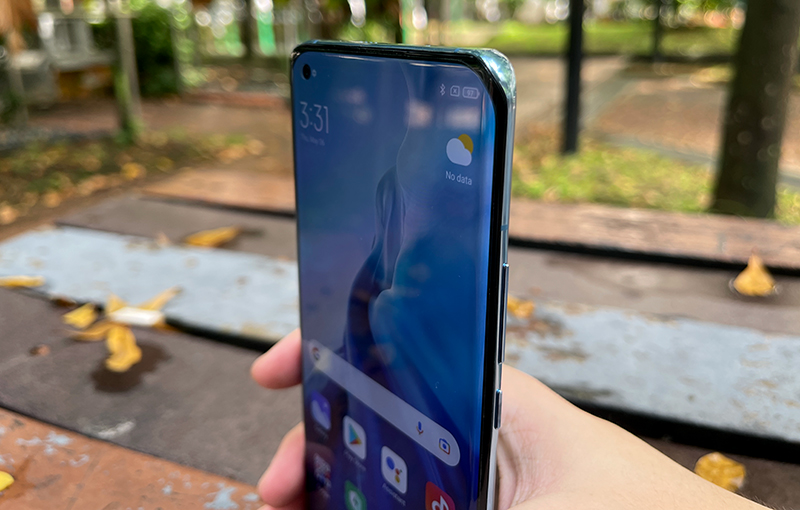 In the audio department lies dual speakers tuned with the help of Harman Kardon. Xiaomi placed the speakers slightly askew on both long sides of the phone. Thankfully, that did not negatively impact its soundstage. The audio itself is serviceable, even if a little bloated in fast-paced dance tracks and string-heavy pieces.

Hi-Res Audio certification comes with the Mi 11, so you’re also not limited to Sony Xperia phones if you want higher-than-CD bitrate playback from your music collection for supported file types. 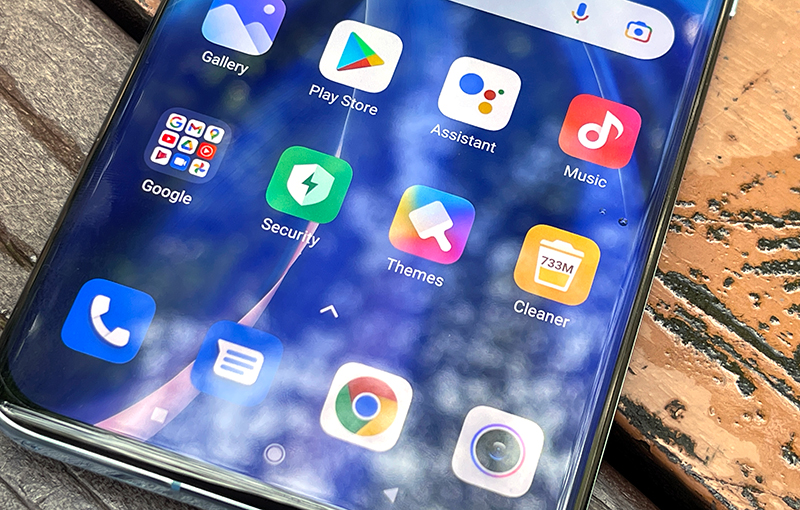 As an Android 11 smartphone out of the box, Xiaomi has packed on its very own skin, MIUI 12. MIUI is similar to most Chinese-made interfaces save for its squarish app icons. Differences from stock Android 11 are mostly aesthetic, like the plain white notifications in the pulldown menu and its Settings app priorities. Swiping right from the Home Screen gives you the Google News fullscreen widget, which is arguably better than iffy third-party widgets that aren’t as practical as news at your fingertips. 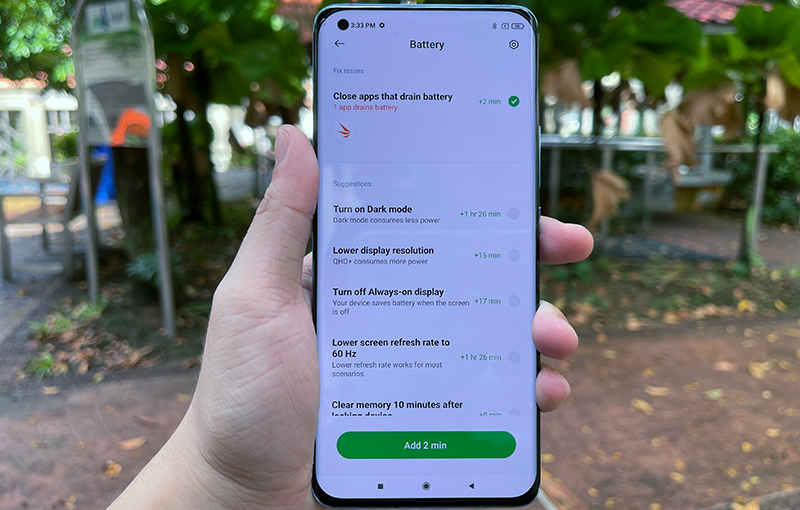 Many MIUI 12 features are either built upon existing Android 11 tools, or are already a part of the featureset in its specific use areas (display, camera, sound, etc.). That left us with the in-display fingerprint sensor and NFC to try, and both work snappily and consistently as intended. If anything, the Mi 11’s NFC feature even lets you set a default payments app and even have a ‘second default’ app if the first doesn’t fire.