The Mi 10 Ultra ships with MIUI 12 - though based on Android 10, which will be another dealbreaker for some. As of the time of writing the phone had received two updates, both of which added only security updates and minor fixes.

MIUI has always been a love-it-or-hate-it affair, and Xiaomi’s aping of iOS without attaining the consistency of iOS continues to be a real weak link for me. Lots of UI elements take up unnecessary and variable amounts of space on the screen, and the interface sometimes just feels like it was made for toddlers - one case in point is the notification shade here (look at that wide font and all that space above and below each notification:

If you have your eye on a Mi 10 Ultra, and haven't used MIUI in some time - stop by a gadget chain store and check out the (local) Mi 10T Pro first to see if MIUI 12 feels right for you. (You might also find that phone’s S$749 sticker price easier to stomach if you grow tired of the phone.)

Note that the Mi 10 Ultra, being a China-only release, comes with no Google services out of the box. However, the Mi 10 Ultra is strangely actually Google certified, and you’ll find a setting to enable Google services in the menus. From there, it’s a simple step to download a suitable installer and get up to speed.

You can be very sure the resulting product is certified for Google services, with it passing Google's SafetyNet verification as proof:

Another thing to watch out for is that China-only Xiaomi phones only have access to the Chinese Xiaomi theme store and fonts. Given that most fonts on that store are in Chinese, good luck getting hold of anything other than the stock Xiaomi font, which is just too wide and generally unpleasant for a mobile device: 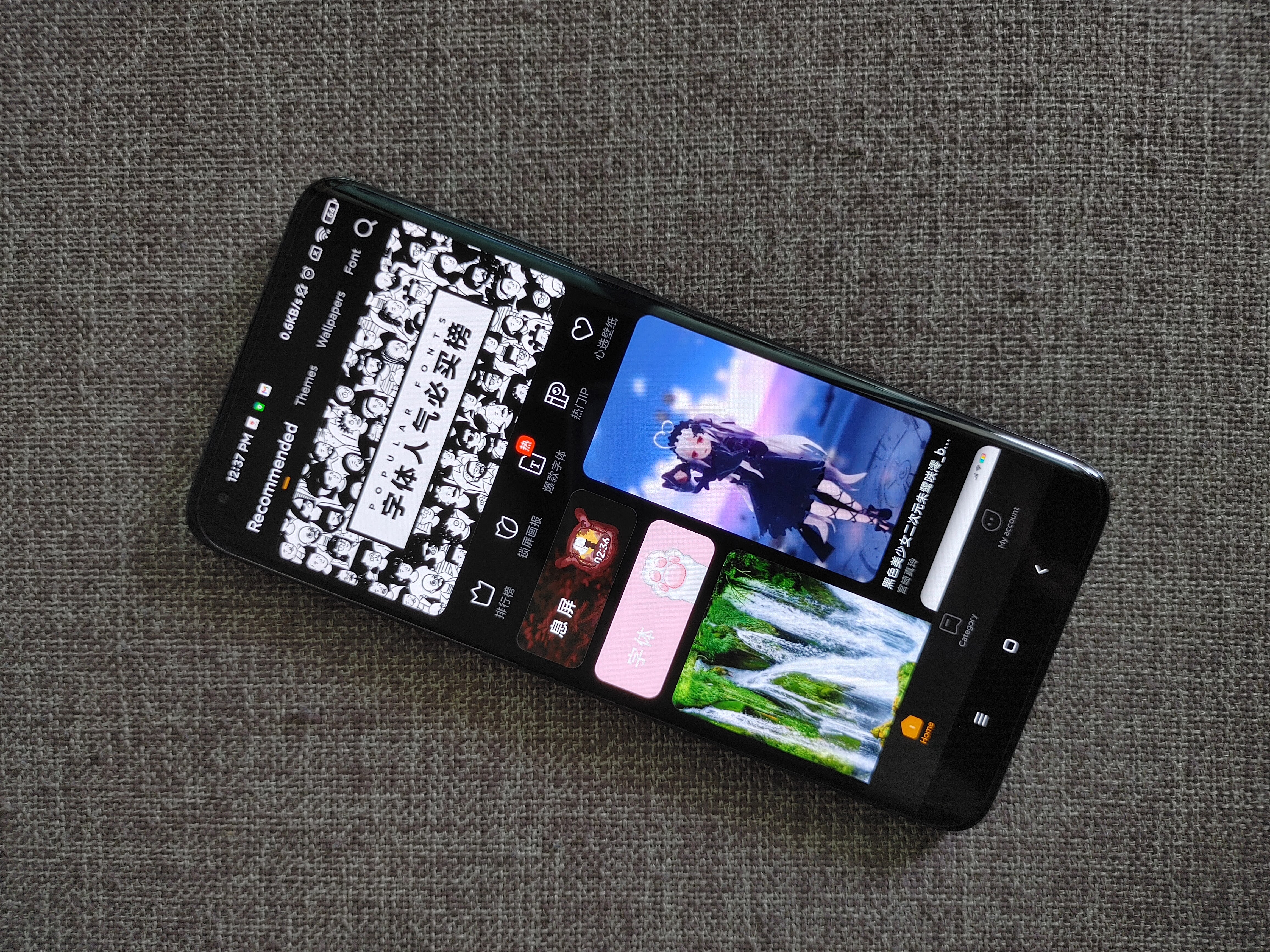 It’s a real pity that MIUI 12 is designed the way it is, because the Mi 10 Ultra delivers the kind of performance where the phone itself just gets out of the way and you can really enjoy whatever you're doing. The 120Hz refresh rate is switchable between 60Hz and 120Hz, but even at 60Hz it’s obvious that the 240Hz touch panel sampling rate is a major factor in the phone’s excellent performance and usability. Design aside, interface elements respond instantly, accurately and proportionally when swiped or otherwise interacted with, and I've never found any perceptible slowdown or lag.

Nothing surprising here; the Android flagships are blown away by the iPhone as usual... 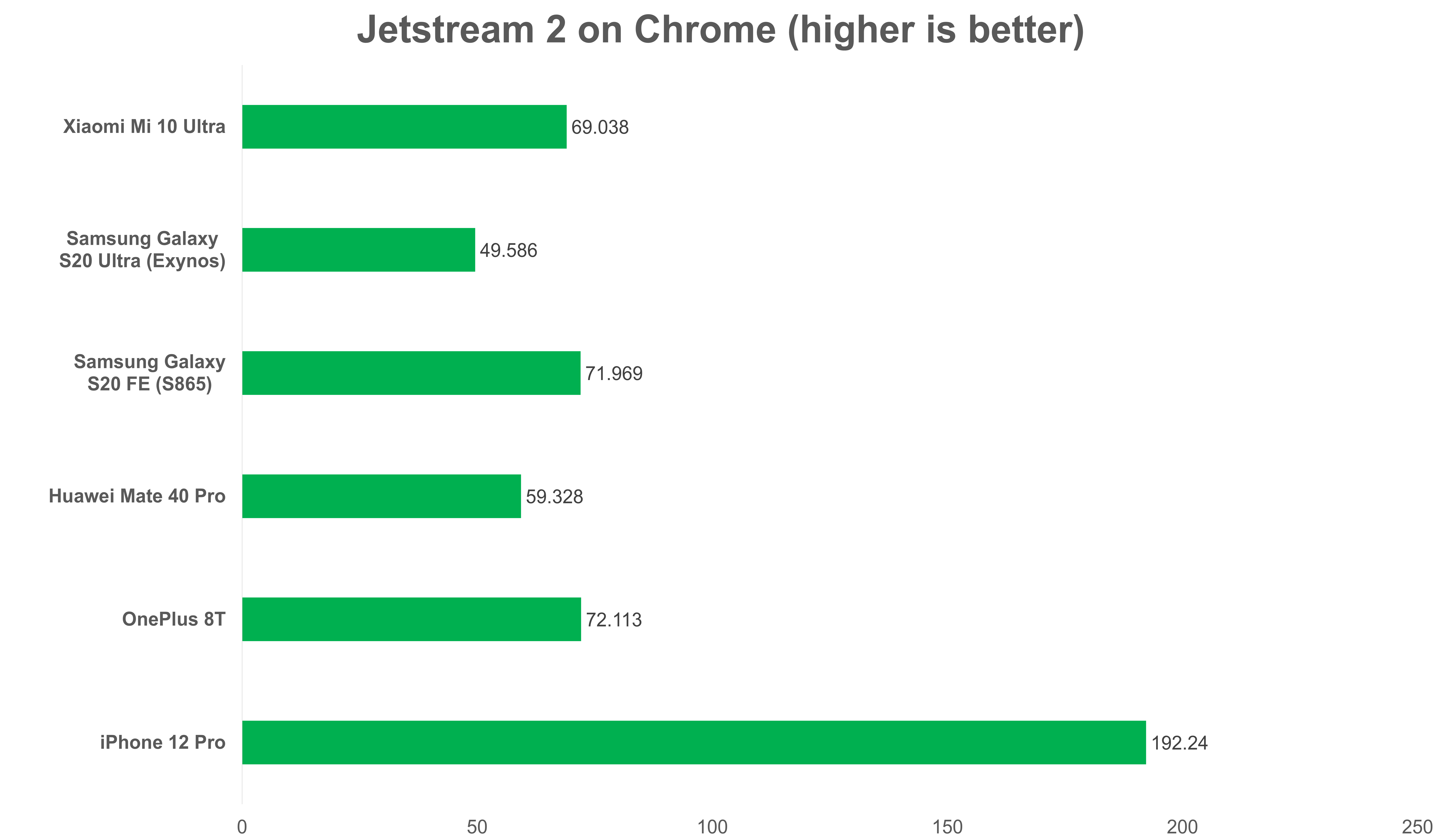 The Mi 10 Ultra turned in a very respectable performance in the all-around Antutu benchmark. We had to get a copy from Antutu's own website - the app is no longer on Play Store, apparently because reasons.

Geekbench drills down into multi- and single-core processor prowess to focus more on compute performance. A great showing here from the Mi 10 Ultra, only bested by the iPhone as usual:

We now turn our focus to 3DMark, which measures overall graphics performance and which we run in Unlimited mode (which ignores screen resolutions). First, the usual Sling Shot:

Hmm. The Mi 10 Ultra puts up a great show in "vanilla" 3DMark, not so much in Wild Life (against the iPhone 12 Pro), probably because Wild Life gets access to the new performance-enhancing Metal API in iOS.

In our usual 720p looping test, with:

the Mi 10 Ultra didn't really stand out compared to the competition - not badly, but then not outstanding either.

We suspect a better result would have been obtained if the display had been switched to a 60Hz refresh rate. 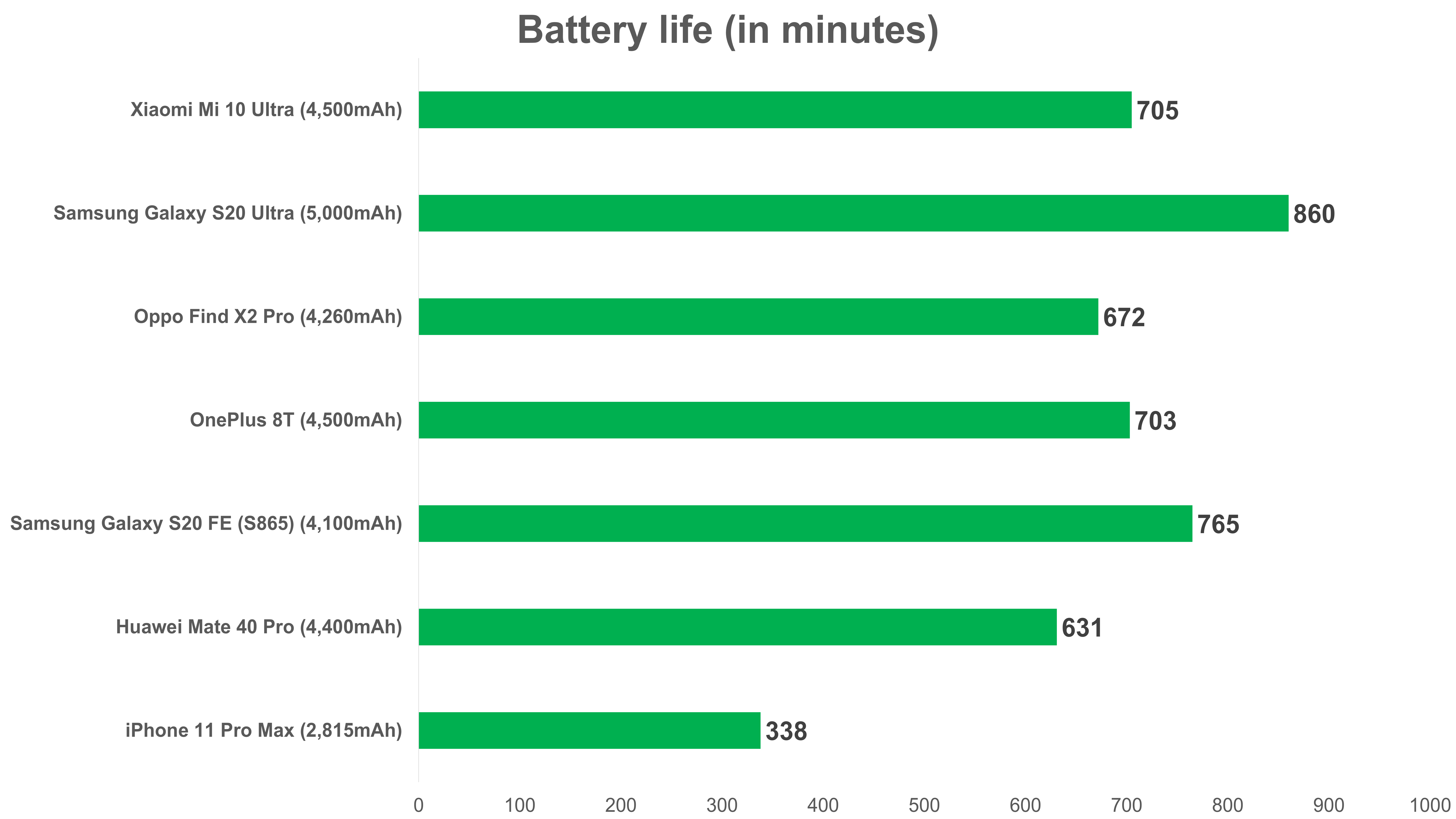 The Mi 10 Ultra has wireless charging (yay) and fast charging to the tune of, get this, 120W (though some tests have found Xiaomi’s official charger only provides 80W to the device.) The 4,500mAh battery uses graphene technology to supposedly extend its lifespan and is split into two 2,250mAh cells to make for cooler and safer charging.

Unless I’m hammering the battery hard with web browsing, social media or photography/videography, I've found the Mi 10 Ultra capable of lasting me from around 8am till at least 9pm on a constant diet of web browsing and Instagram, half an hour of Waze, and some TikTok and YouTube. And if you were wondering, don't worry - TraceTogether app doesn't have any battery drain issues on this device.

As with all phones with high refresh rate displays, those expecting to get to midnight will need to disable the 120Hz refresh rate mode, though this problem is less pronounced than on some other phones I’ve tried such as the Galaxy Note 20 Ultra.