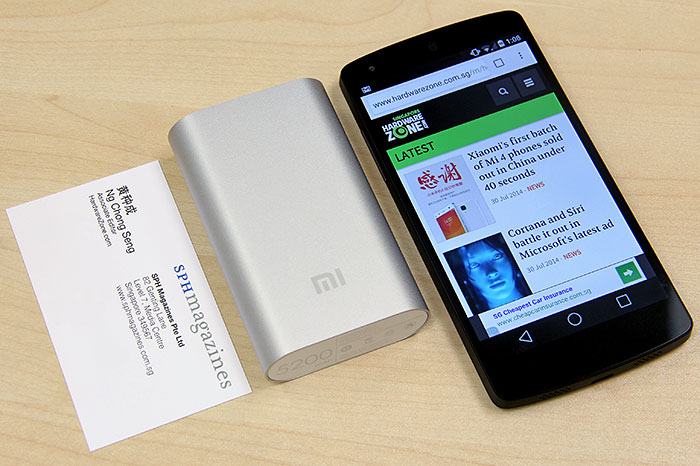 The Xiaomi 5,200mAh Mi Power Bank probably needs little introduction, especially if you’ve read our review and teardown of its 10,400mAh sibling. At about 29% slimmer (55mm vs. 77mm in width; the differences in height and thickness are negligible) and 38% lighter (155g vs. 250g) than the latter, it’s bound to attract those who deem the 10,400mAh version expensive (really!?), too bulky to carry around, or those who don’t need to recharge their devices multiple times over.

We shan’t go into great length for this review, since most of what we’ve written for the 10,400mAh version also applies to this 5,200mAh version. In a nutshell, it has the same CNC-machined and anodized aluminum shell, the same button and input/output ports (albeit arranged slightly differently due to the smaller casing), and the same reliability and environmental testing results. The battery cells are again sourced from either LG or Samsung (just that it uses two cells instead of four) and the USB smart-control and power management chips come from Texas Instruments, so it has the same voltage, current, and temperature protection mechanisms just like the 10,400mAh Mi Power Bank. 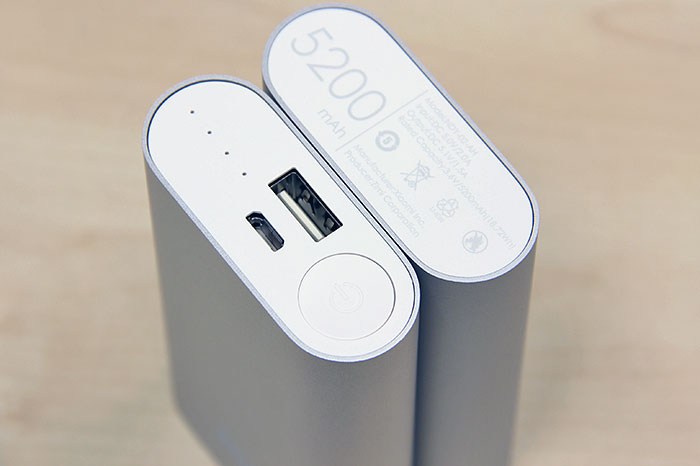 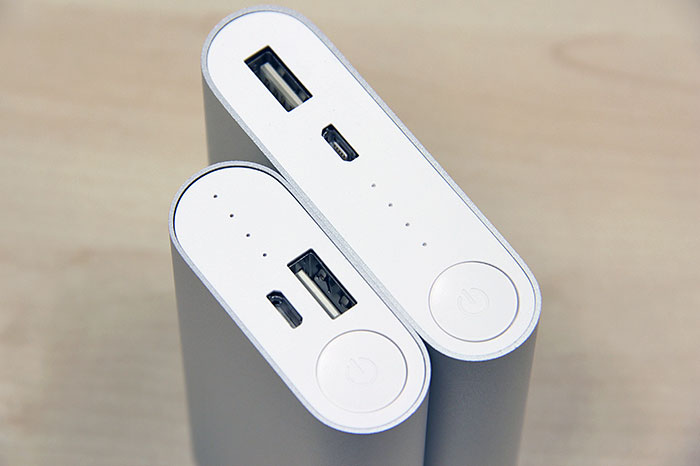 The first difference that caught our attention between the 5,200mAh and 10,400mAh Mi Power Banks is the former has a lower maximum conversion rate - more specifically, 85% vs. 93%. Broadly speaking, this means that while the 5,200mAh version has half the capacity of the 10,400mAh power bank, the number of recharges you get from the former isn’t exactly halved of what you’d get from the latter. Because looking at the conversion rate numbers (which actually refer to the conversion efficiency of the internal circuit boards), the 5,200mAh Mi Power Bank is less efficient than its bigger sibling. 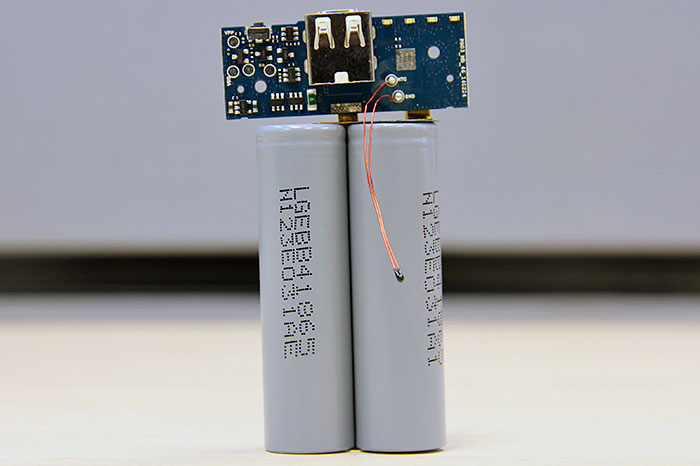 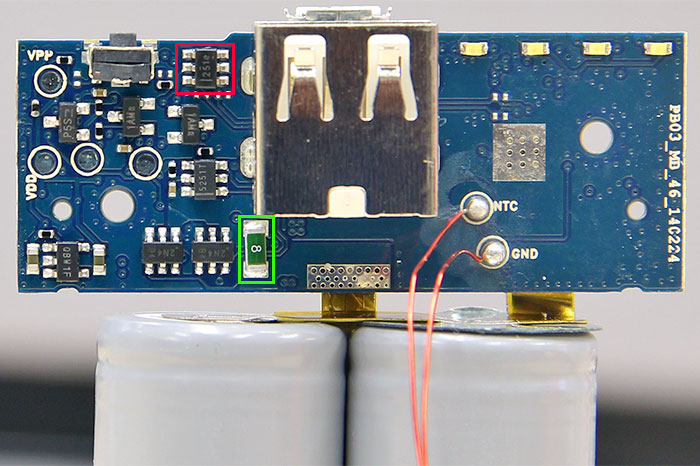 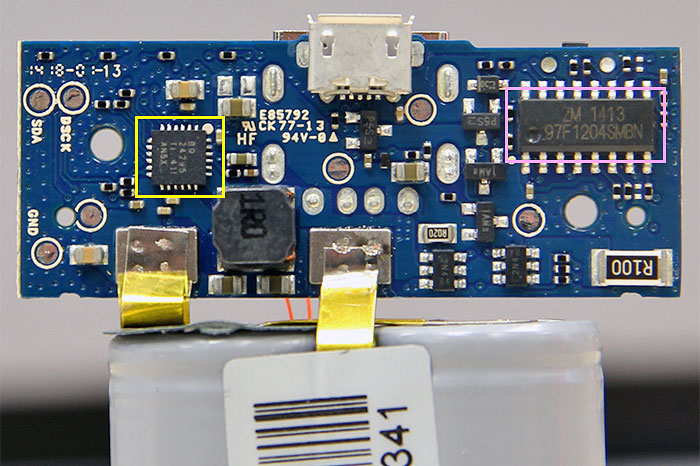 For nerds interested in conversion rate, know that the 18650-type battery used by both Xiaomi power banks has a rated voltage of 3.6V. This needs to be boosted to about 5V internally in order to supply the correct output current for the smartphone or tablet. This conversion/boosting/current-switching process inevitably results in drops in efficiency. In our experience, the actual capacity of power banks using 18650 batteries (i.e., one has to consider the efficiency of both the power management IC and the batteries used, among others) at 5V is usually around 60 to 65% of the batteries' rated capacity at 3.7V, which looks to be the case for the 5,200mAh Mi Power Bank. The 10,400mAh seems to fare better; we estimated it to be around 70 to 75% 65 to 70%. (Update: After more testing, we believe the 10,400mAh's discharge efficiency is slightly below 70%).

What this means is that if your devices accept more than 1.5A (usually tablets), then this 5,200mAh power bank won’t be able to recharge it as fast as the 10,400mAh power bank or a wall adapter that outputs 2.1/2.4A. Of course, considering its lower capacity and the fact that tablets typically use much bigger batteries than smartphones, it's fair to assume that this 5,200mAh power bank isn’t really designed with tablets in mind in the first place. 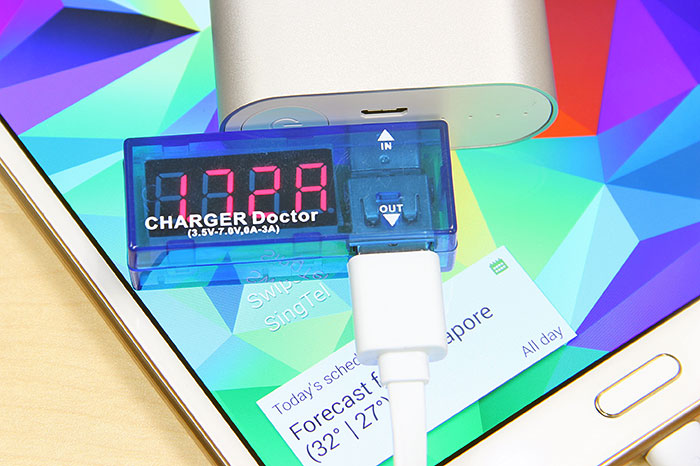 That said, batteries used in smartphones are also getting bigger these days. Looking at its conversion efficiency, our recommendation is to skip the 5,200mAh version and go straight for the 10,400mAh version if your device’s battery capacity is higher than 3,100mAh.

On a separate note, the 5,200mAh Mi Power Bank accepts input current of up to 2.0A, so it shouldn’t take long to recharge its cells after a day’s use. According to Xiaomi, it takes about three hours if you use a 5V/2A USB adapter, or five hours if you use a 5V/1A adapter. Like the 10,400mAh power bank, you’ve to source and use your own adapter. 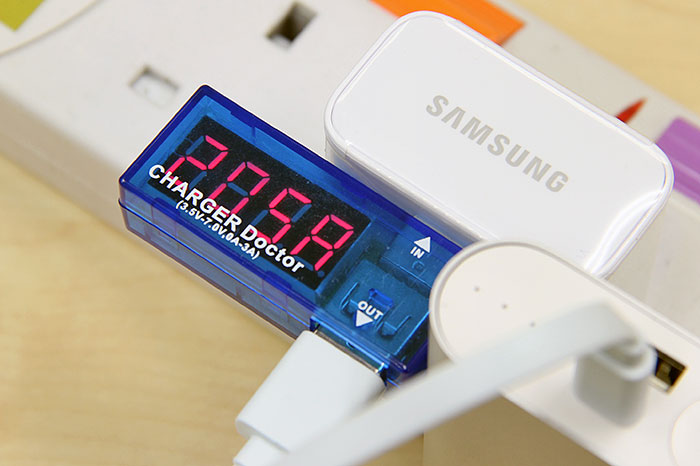 So there you have it, our - cough - simple review of the 5,200mAh Mi Power Bank. To sum up, at S$8.99, it offers tremendous value for smartphone users. It’s compact, and it charges and recharges fast.

For tablet users, power users (pun fully intended) who use their phones heavily throughout the day, or those who don’t mind the additional bulk, the 10,400mAh version is the better choice. 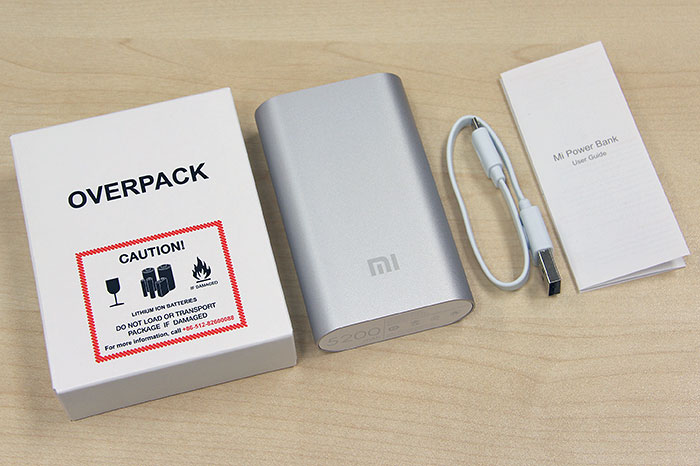 Write a Review
Compare This | Specifications
Looks good, feels good
1.5A output; 2A input
Quality components
Super affordable
Charges one device only
Doesn't come with a power adapter
Not enough capacity for modern tablets
Our articles may contain affiliate links. If you buy through these links, we may earn a small commission.
Sponsored Links