Xiaomi 16,000mAh Mi Power Bank review: Get it if you need to charge 2 devices fast

Xiaomi 16,000mAh Mi Power Bank review: Get it if you need to charge 2 devices fast 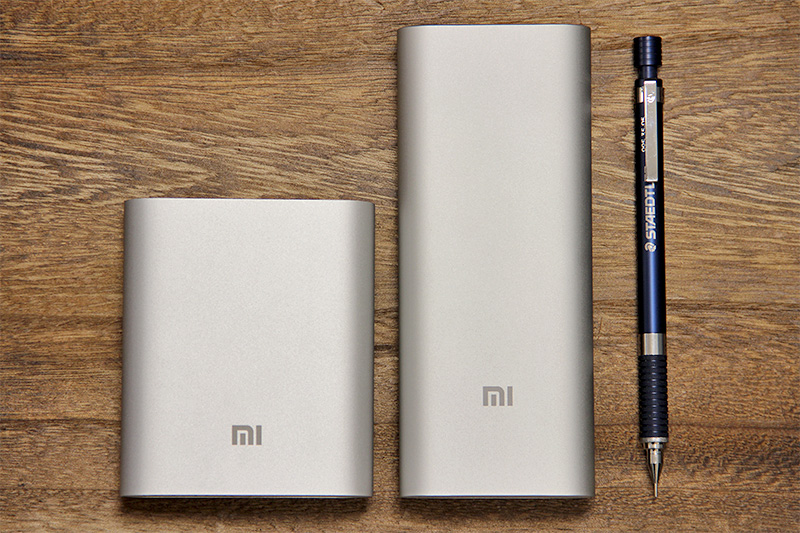 Available in China since November, the 16,000mAh Xiaomi Mi Power Bank has also reached Malaysia and Singapore shores. More specifically, in Singapore, sales will commence on the Mi Singapore online store tomorrow, December 16, at 12pm and 8pm. The price? S$29.99.

In more ways than one, I’m beginning to sound like a broken record talking about Xiaomi’s power banks, especially after the 10,400mAh and 5,200mAh versions' reviews and teardowns. From a design standpoint, the 16,000mAh Mi Power Bank bears a lot of similarities as its smaller siblings, including an anodized metal casing that’s CNC-machined from a single piece of aluminum; curved sides for ease of handling; an indented power button that minimizes accidental presses; and indicator lights, unmarked input and output ports all grouped on the same white plastic plane for a clean and refined look. Indeed, if not for the Mi logo, one would have thought that the Mi Power Banks are made by Apple.

To say Xiaomi didn't improve the design isn't exactly right either. Upon closer inspection, you'll notice that the power bank sports slightly rounded edges at the top and bottom, which means they now aren't as sharp at the edges like the two other power banks.

High capacity aside, the 16,000mAh Mi Power Bank also comes with two USB charging outputs, thus answering the main complaint I’ve for the 10,400mAh version. Both ports support a 2.1A output current, but the combined rate is pegged at 3.6A (over 5.1V). What this means is that if you were to connect only one device to the power bank, either port is capable of 2.1A charging. However, when both ports are used, you don’t get a total output of 4.2A; instead, it’s limited to 3.6A. 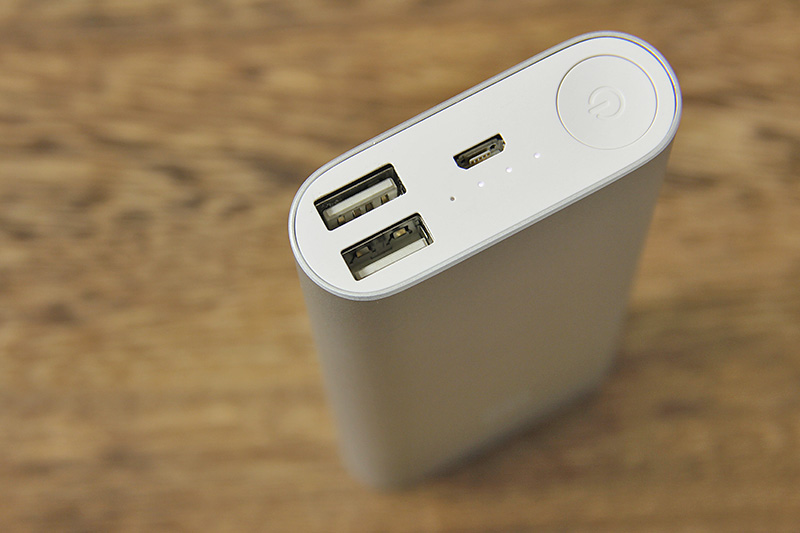 Did the ports work as claimed? Yes; in my tests, when used independently, each port was well capable of 2.1A output current. In fact, they went above 2.1A (voltage will regulate accordingly) in many occasions. When both ports were used, I typically got a combined rate of around 3.7 to 3.8A. Even with a 4A load, it still worked, but I didn't proceed any further in fear of stressing the ports too much. In essence, everything checked out fine.

Therefore, don’t be mistaken: I’m not knocking the 16,000mAh Mi Power Bank for not supporting a combined 4.2A output. As much as I’d love it to do so, I’m also mindful that it’s technically very, very difficult to do (long story short: heat). And remember, there are many more expensive dual-USB power banks out there which have hardwired 2.1A and 1A ports, and which can’t even promise a combined 3.1A rate. So a 3.6A/5.1V dual output spec is really very good, especially at S$29.99. 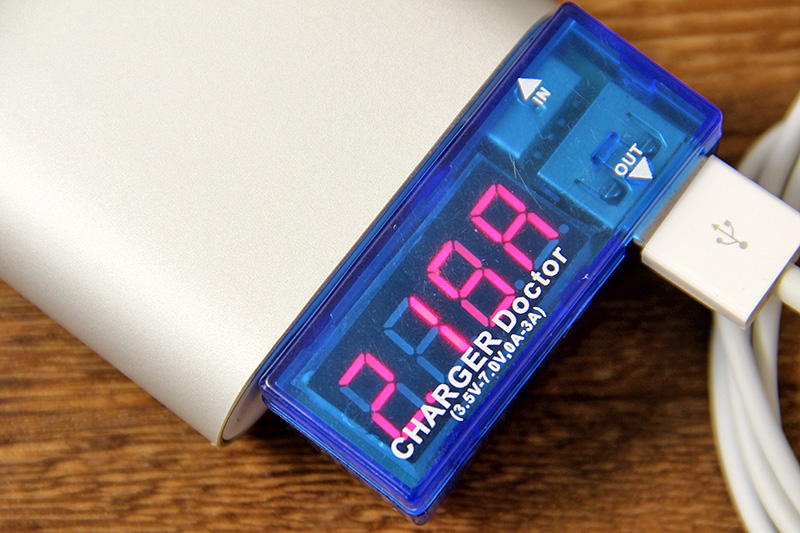 A word on capacity

I’ve also noticed that Xiaomi has (for the first time?) listed a typical output capacity (over 5V/1A) for this power bank: 10,800mAh. This number is important because it’s a better representation of how many times the power bank is able to charge a device. 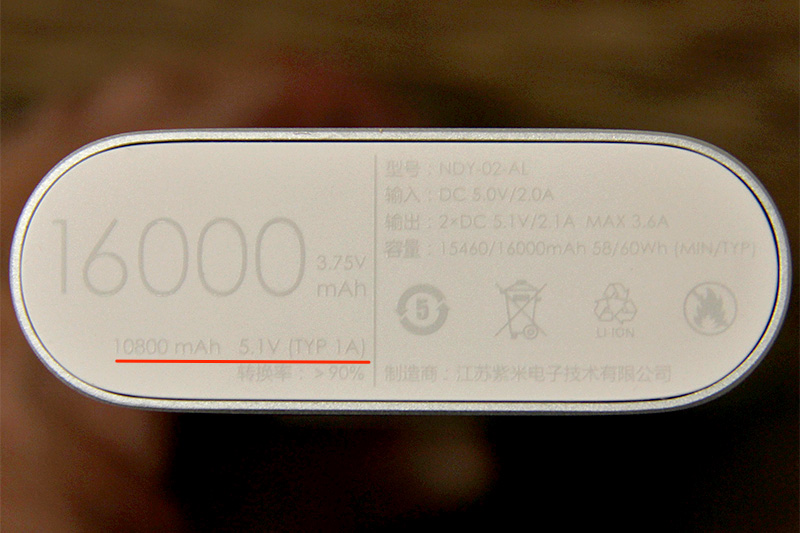 To digress a bit, know that the 16,000mAh is the capacity at 3.75V; hence, the power bank has a total energy of 60,000mWh (milliwatt-hour) or 60Wh (watt-hour). But then, the output is done over 5.1V. At this voltage, the capacity is actually about 11,765mAh. And after factoring in the 90 to 93% conversion efficiency that Xiaomi claims (this refers more to the internal circuit board), we get a range (10,588 to 10,941mAh) that’s close to this 10,800mAh number. Note too that this is possible under a 1A current. Both the total output capacity and circuit conversion efficiency will be lower during 2.1A fast charging, due to more energy lost.

The above is why Xiaomi says the power bank is able to charge the 3,100mAh Redmi Note 4G smartphone 3.5 times (3,100mAh x 3.5 = 10,850mAh), instead of 5 times, because it’s simply not a case of 16,000mAh divided by 3,100mAh. Not using the Redmi Note? Other numbers include the ability to fully recharge the iPhone 6 about 5 times, and the iPad Mini 2.5 times. Of course, these are under ideal circumstances. Your mileage is likely going to vary once you factor in other variables like your mobile device’s internal circuitry and the battery’s health.

And lest I forget, the 16,000mAh Mi Power Bank retains the 2A micro-USB input for recharging its own cells. Like the other power banks in the series, an AC adapter isn’t part of the package, so you’ve to source your own. With a 2A/5V adapter, topping the power bank’s charge would take about 9 hours; with a 1A/5V adapter, it’s 14.5 hours. For what it’s worth, I found that it was easier to hit the 2A with a Samsung 2A/5V charger than with an Apple 10W (2.1A/5.1V) or 12W (2.4A/5.2V) iPad charger. And no, it won’t charge any faster with a Quick Charge 2.0 charger like the Motorola Turbo Charger and HTC Rapid Charger 2.0, or a Samsung Adaptive Fast Charger. 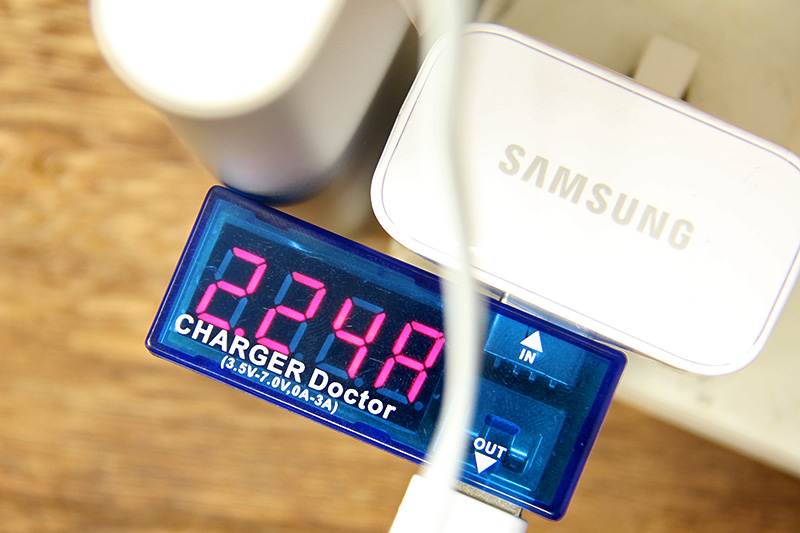 The 16,000mAh Mi Power Bank also boasts of “nine layers of circuit protection”. In a nutshell, it supports protection from over-voltage (input and output), over-current (input and output), short circuit, over-charge/discharge, and temperature spikes. In addition, it has a reset function and is able to stop charging when it detects that the charger is inserted incorrectly. To be honest, such safety mechanisms are common in power banks, but the reason why Xiaomi is highlighting it on the product page is because it uses control and charging chips from U.S.-based Texas Instruments, which is a major global semiconductor design and manufacturing company, instead of from an unknown OEM. And don’t forget, the quality of the charging/discharging IC plays an important role when it comes to the conversion efficiency I’ve talked about above.

So, is Xiaomi telling the truth with regards to the components used? Looking at the previous 10,400mAh and 5,200mAh Mi Power Bank teardowns, it should be. But I just couldn’t resist taking apart the 16,000mAh version to get a confirmation.

Teardown findings (a.k.a. skip to the bottom if you don’t like reading geeky stuff) 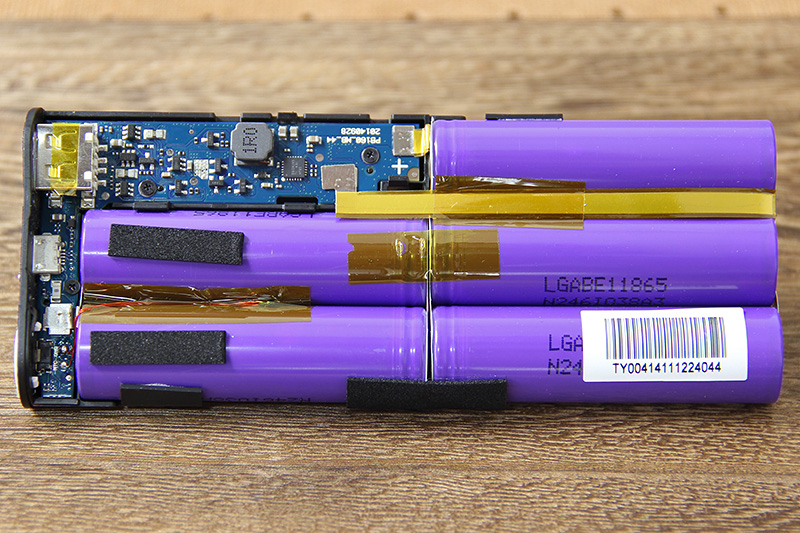 The choice of charge and power path management IC continues to be the Texas Instruments BQ24195 in a 24-pin, 4 x 4mm-thin QFN package, the same one seen on the 10,400mAh model.

The other TI chip onboard is the TPS2513, a USB dedicated charging port (DCP) controller. In short, its job is to monitor the USB ports’ data line voltage, in order to identify the charging signals and provide the correct charge. This is the reason why the power bank is able to adjust its output level and work with a variety of smartphones and tablets. By the way, this controller is essentially the same as the TPS2514 seen on Xiaomi's other power banks, just that this one supports dual USB ports. 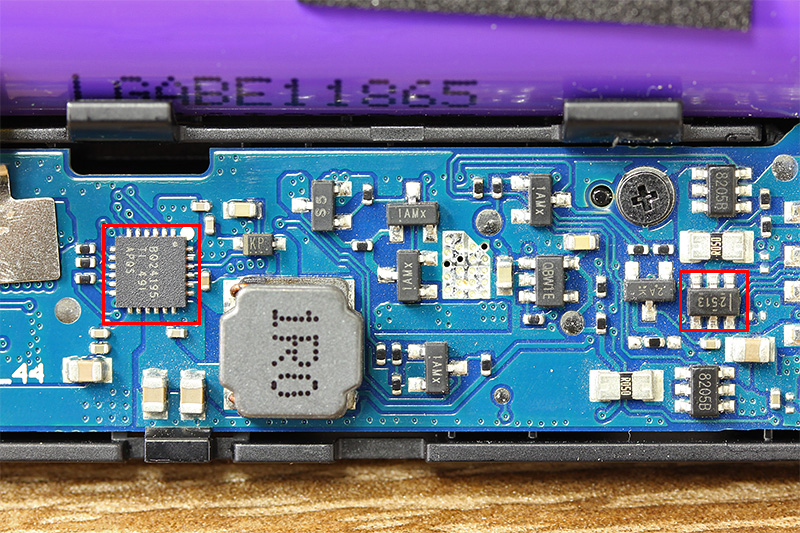 What I didn’t expect to find however is this part labeled ‘VL4TB’, which according to this excellent teardown from a Chinese battery and charging equipment specialist site, is a Silergy SY7065A. Like the TI BQ24195, it features a highly efficient synchronous boost converter that supports 5.1V at 2.1A. Long story short, the 16,000mAh Mi Power Bank actually relies on the BQ24195 for one of the USB outputs, and this SY7065A for the other USB output. 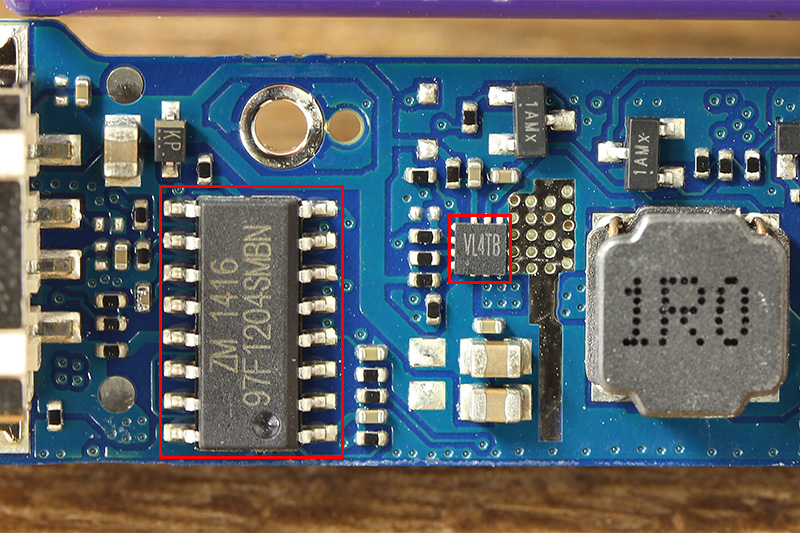 All in all, it’s not a surprise that the 16,000mAh Mi Power Bank shares many similarities with its siblings, be it components used or PCBA (printed circuit board assembly) design. So then why does the 16,000mAh cost twice as much as the 10,400mAh model? I think it’s a simple case of more expensive chips and batteries. Remember, the LGABE11865 is new, and there are five in this power bank.

Let’s cut to the chase. Should you get the 16,000mAh Mi Power Bank? If you’re looking for a performing power bank to charge two devices simultaneously, the answer is yes. It’s reasonably well designed, uses pretty good components, and offers fast charging (even when both ports are used) and recharging. Sure, with better components and technical design, a higher discharge efficiency than what it's doing now is possible; but considering it costs only S$29.99, I believe most users would be more than happy with its current performance.

That said, if you only carry one mobile device, then the answer becomes “it depends”. While the larger capacity means it’ll last longer than the 10,400mAh version, the added heft may be a deal-breaker for some. And even though having that extra USB port sounds attractive, one can’t help but wonder if it’s better to just buy two 10,400mAh power banks, which will give you a combined 20,800mAh capacity and two unrestricted 2.1A outputs, at a price that’s still S$2 cheaper than one 16,000mAh power bank. The obvious downside to this is that you’ve to also live with the extra bulk and combined 0.5kg weight of the two 10,400mAh power banks when you’re out and about. So, convenience or more capacity/better savings? You decide. 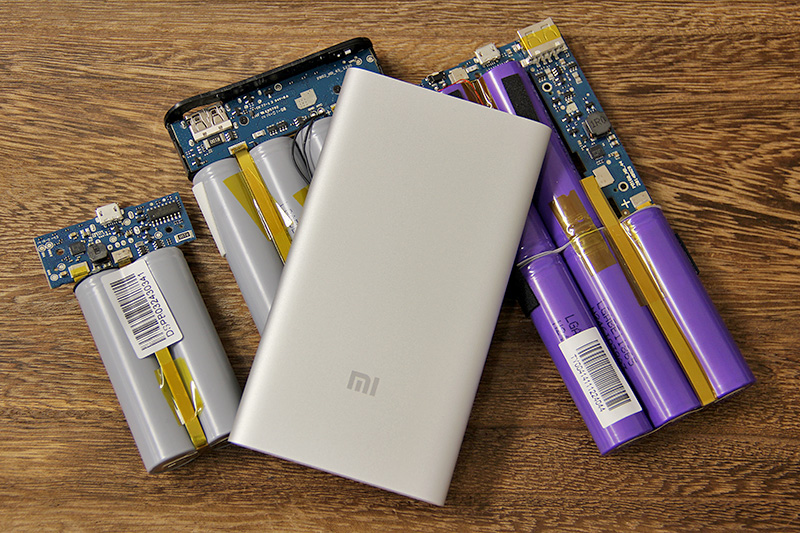