The Xiaomi 12T Pro uses a Qualcomm Snapdragon 8+ Gen 1 processor to power the device. We've already introduced the chipset in separate articles, like the Samsung Galaxy Z Flip4 5G and Vivo X80 Pro. It is basically the best 2022 flagship-grade chipset Qualcomm can offer to consumers in 2022.

That puts the Xiaomi 12T Pro against other SD8+G1 competitors in Singapore, along with similarly priced peers like the Google Pixel 7 series phones. 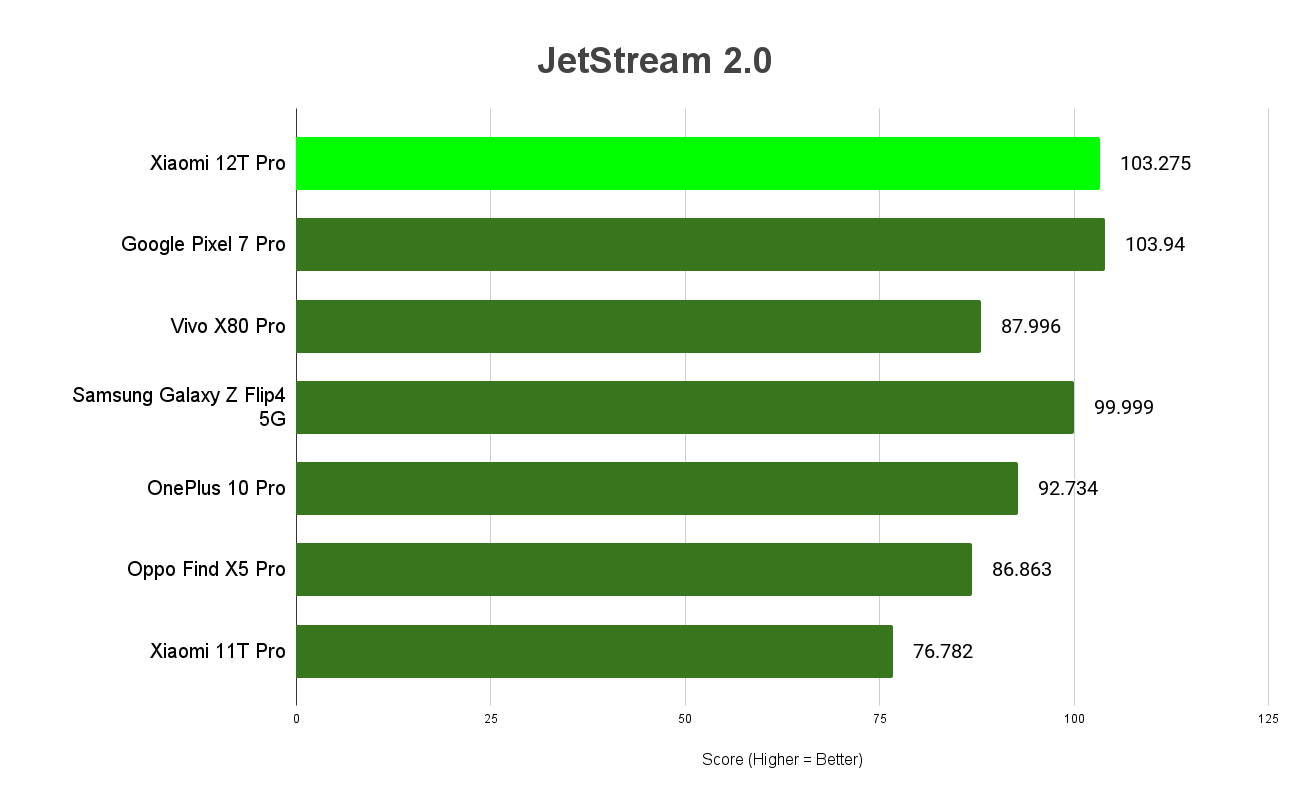 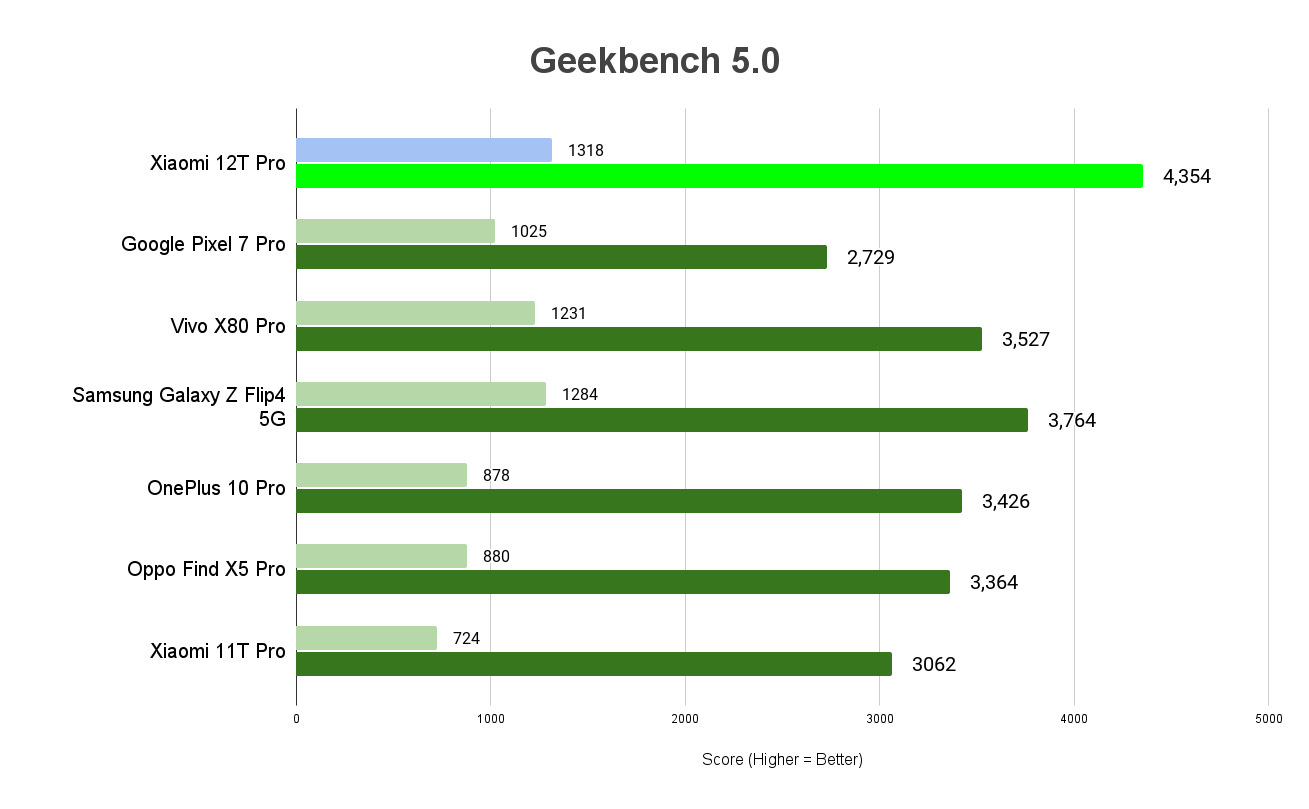 In Unlimited mode, the benchmark runs offscreen using a fixed time step between frames. Unlimited mode renders exactly the same frames in every run on every device, regardless of resolution scaling. The higher the score, the better. 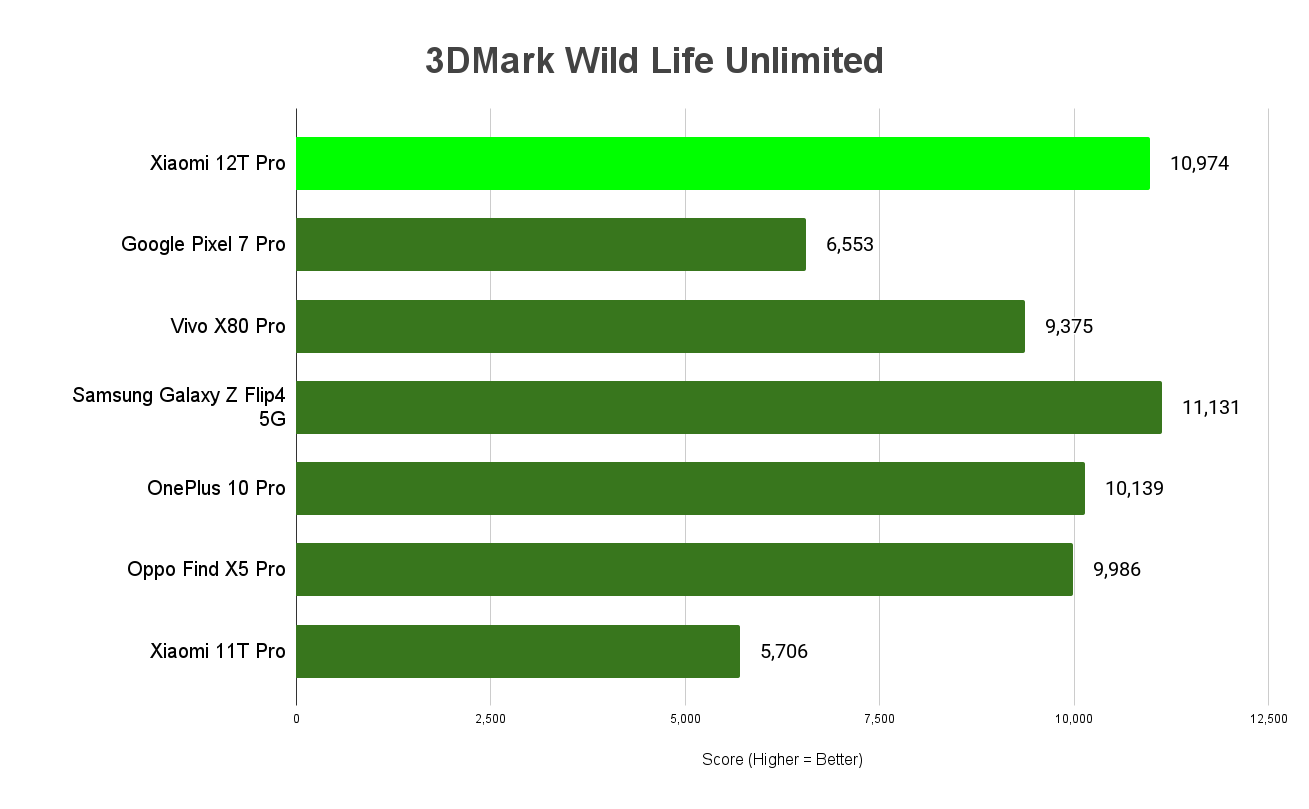 Since this is a newly introduced benchmark in our reviews, we’re building up our database of PCMark scores for Android phones. 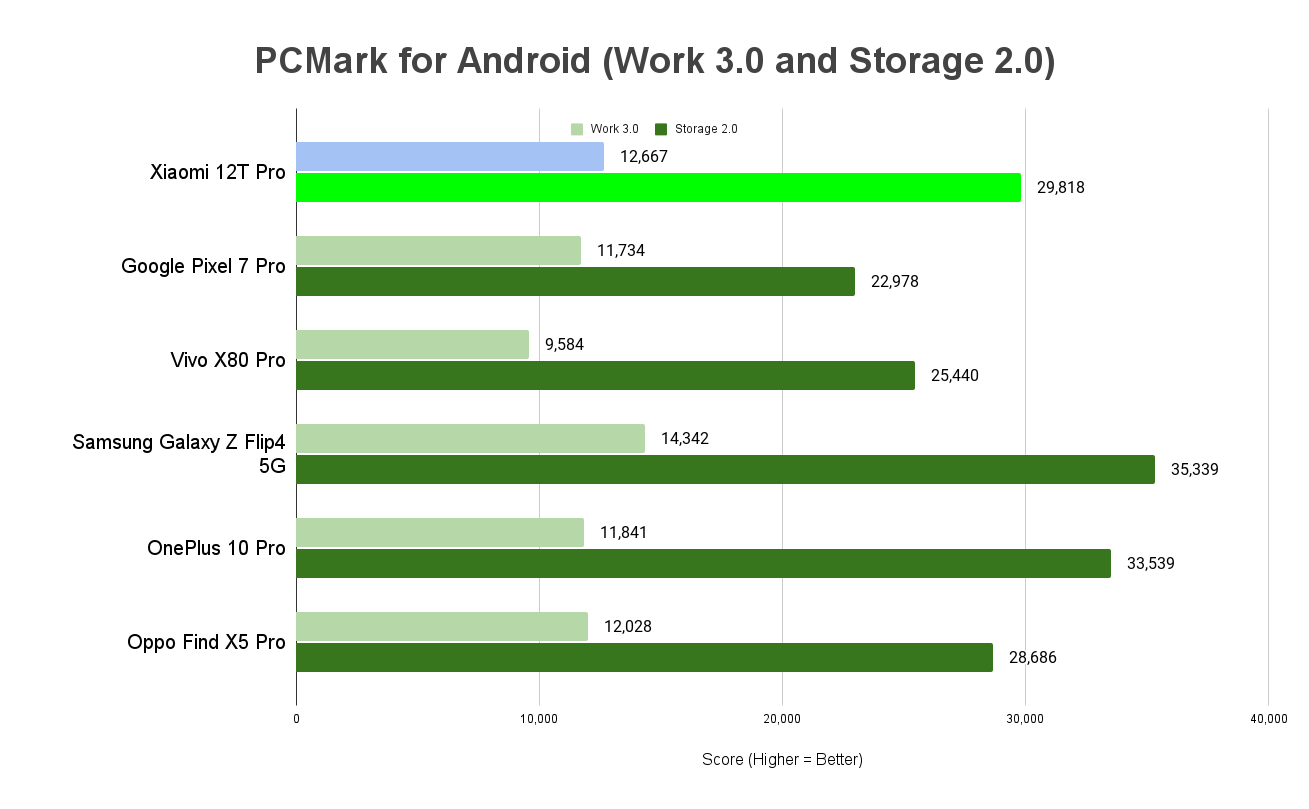 With an SD8+G1 inside the Xiaomi 12T Pro, the phone’s synthetic performance matches that of other more expensive alternatives carrying the same component. In real-world use, the Xiaomi 12T Pro was able to handle 3D games at 60Hz without heating up. Navigation, recording, and general use were fine too. Our only performance-related issue of note was the longer-than-usual bootup time the phone had. 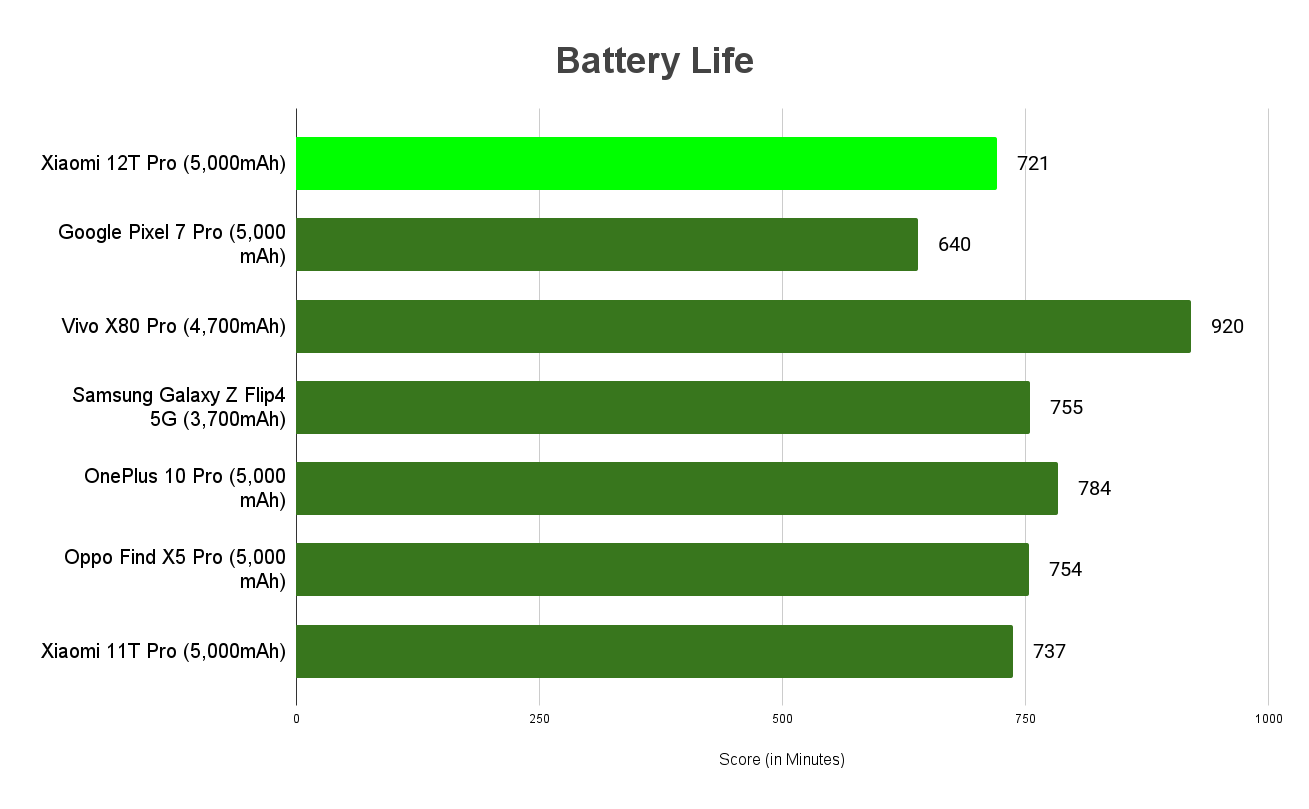 Xiaomi 12T Pro’s 5,000mAh battery gave us a solid 12 hours of uptime in our battery test. While it is not the longest in its class of rivals, the Vivo X80 Pro even trumped the 12T Pro by a few hours, we feel that 12 hours is still reasonably good considering the 12T Pro seemed to perform better in benchmarks overall.

Also, using its provided 120W charger took a mere 12 minutes to charge from 0% to 50%, and just under 25 minutes for a full charge. Xiaomi 12T Pro’s easily the fastest-charging phone battery we’ve encountered in 2022. It’s very convenient for users who can’t be tethered to a charging point all day long, but that also means you’ll need to carry its charging head to capitalise on its extreme fast-charging capabilities. Do note that the Xiaomi 12T Pro has no wireless charging support. 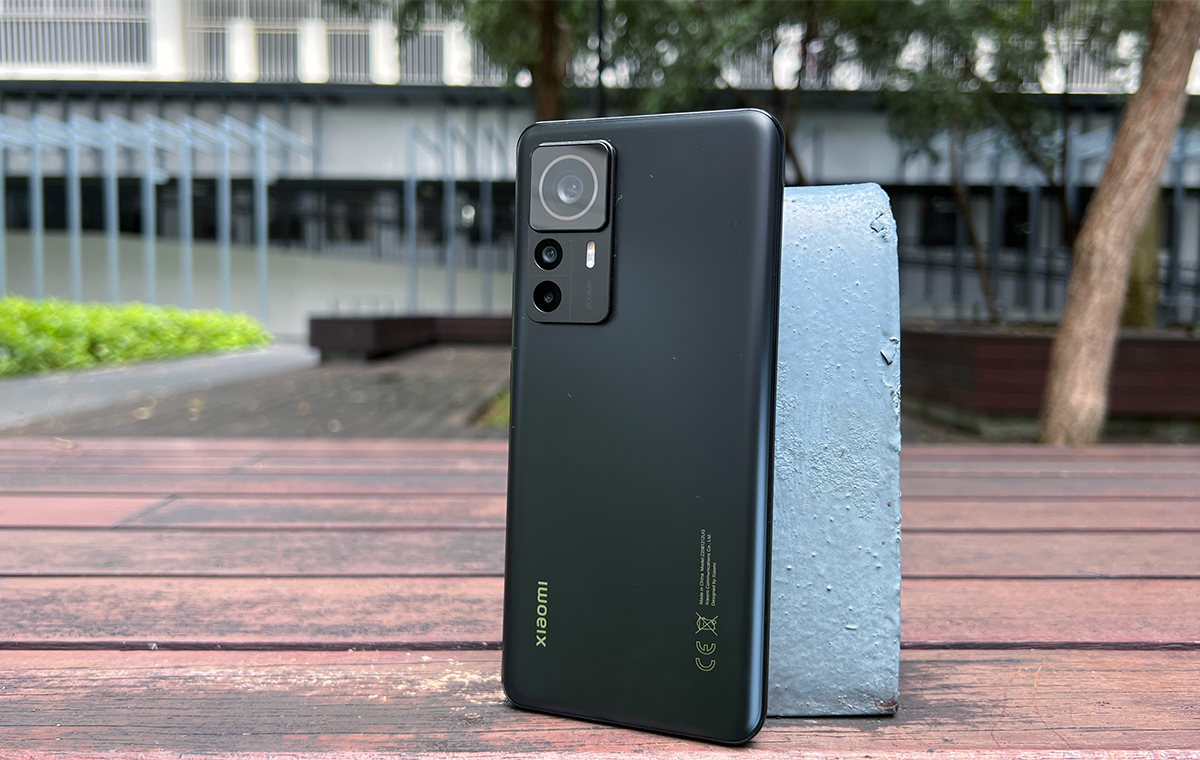 In some ways, the Xiaomi 12T Pro is still head-and-shoulders above true flagship handsets when it comes to its T-series emphasis on value for money.

S$1,099 gets you more than 1080p display resolution, 120Hz refresh rate, a top-end Qualcomm Snapdragon 8+ Gen 1 chipset, 120W fast charging, and 256GB storage to boot. There are flagship or premium flagship alternatives that charge more but don’t offer all of those perks at that price point.  Probably the only missing piece of its puzzle is wireless charging.

The 200MP camera offers a nice touch to the overall handset. While you can certainly get stronger imaging performers around the 12T Pro’s price – like the Pixel 7 or Pixel 7 Pro – Xiaomi at least gives you some shooting flexibility and decent-looking photos with its camera combo. The firm also made good use of its pixel-binning techniques to help you get more out of its sensor.

The downsides to getting it are generally found on phones that trade polish and premium for a better price and are more experiential than performance related. The phone’s design is uninspired, with average handling. The UI, while improved, still lacks intuitiveness in some areas. Display too, could use a bit more calibration and fine-tuning for better colourisation and accuracy. And while the 12T Pro may lack IP68 certification, it does still offer some protection with its official IP53 dust and water resistance rating. 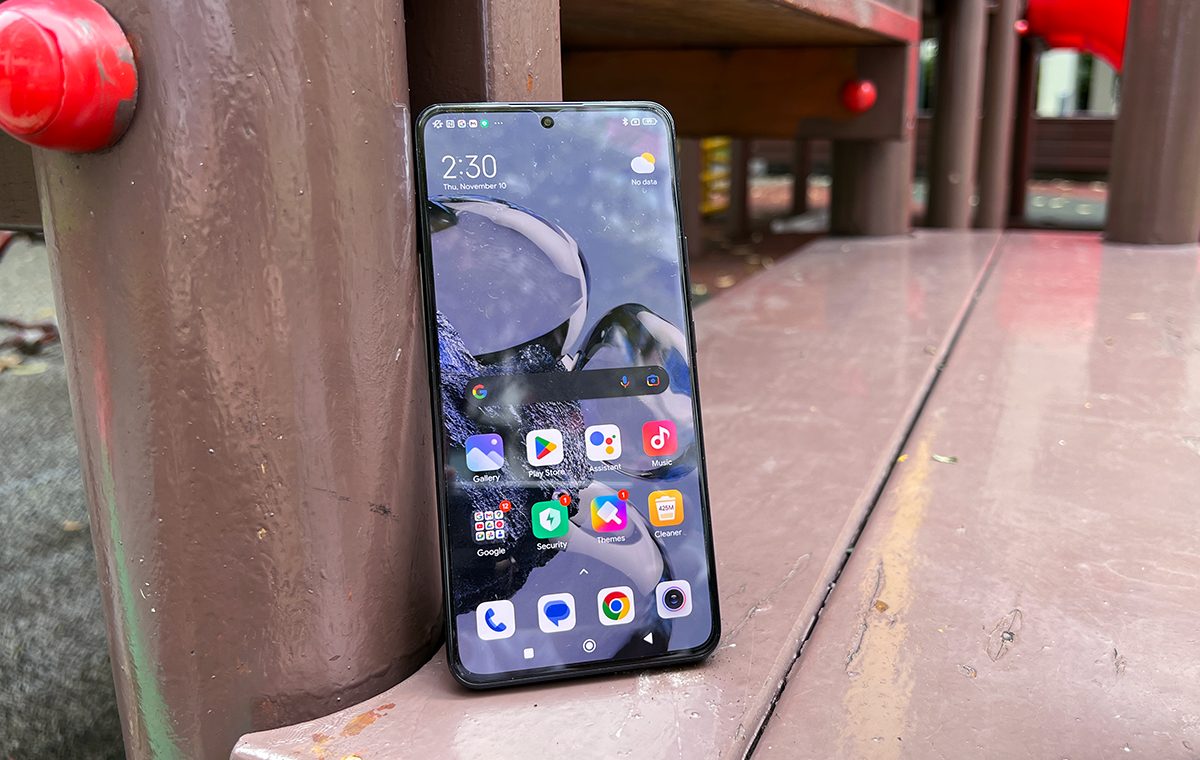 All in, Xiaomi 12T Pro satisfies what it’s designed to offer. You can’t really go wrong with this phone choice if your core focus is on a fluid display, good battery uptime, and a powerful processor in your phone. It's true that there are cheaper, more polished alternatives to choose from, but the Xiaomi 12T Pro is functional in those areas too. It's a good overall package that also convinced us to give our Best Value accolade.

If you want to spend as little as possible and still get a phone with an SD8+G1 processor and all the ‘core’ flagship perks, the Xiaomi 12T Pro is quite literally it (at least in Singapore). In our initial launch coverage, you'll also note that Xiaomi still offers a non-Pro Xiaomi 12T at somewhat similar pricing to the Xiaomi 11T Pro, but you don't get the top-tier treatment like its choice of camera sensors, less memory and trading Snapdragon for a Mediatek processor.

Xiaomi 12T Pro is available at S$1,099 on its official platforms. If you want a greater bargain, you should check out its physical Causeway Point store opening promotion too.

Write a Review
Compare This | Specifications
Good screen
Top-end processor
Insanely speedy charging
Decent battery uptime
Good value for money
Average design
No wireless charging
IP53-rated vs IP68 alternatives (if it matters to you)
Our articles may contain affiliate links. If you buy through these links, we may earn a small commission.
Sponsored Links