Walking the Middle Ground with the 7950

Exactly a month ago, we witnessed AMD offering a fairly big performance leap for gaming enthusiasts with the availability of the Radeon HD 7900 series. Currently occupying the throne for the most powerful consumer graphics cards with the Radeon HD 7970 and the Radeon HD 7950, it remains to be seen if they'll hold their spot with the onset of the NVIDIA GeForce GTX 680. We'll find out in a week's time, but for now, we focus upon an overclocked Radeon HD 7950 offering from graphics card specialist XFX.

As covered in our detailed Radeon HD 7900 series article, the Radeon HD 7950 offers enthusiasts a pretty good upgrade option if you're not already using some of the top previous generation graphics cards (Radeon HD 6970 and GeForce GTX 580 to name a few). It shares the same Tahiti GPU core as the AMD Radeon HD 7970, but has less active GCN compute units (28 to be exact). As with most other GPU offerings that play second fiddle to the fastest SKU, the target market for the Radoen HD 7950 are enthusiasts looking for premium performance of the Taihiti GPU at a slightly discounted price. Using the launch prices of the Radeon HD 7900 series, the 7950 is a notable 18% cheaper than its speedier counterpart. To get a better picture of where the AMD Radeon HD 7950 stands, do check out the specifications comparison table. 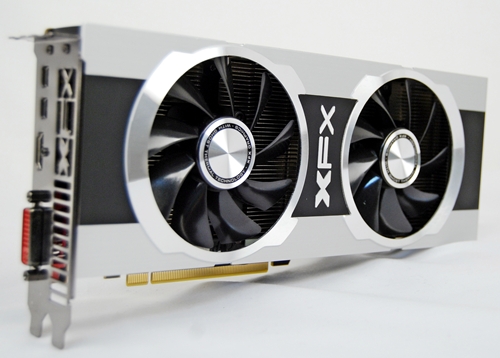 Once You Go Black, You Can't Go Back!

The XFX R7950 Black Edition Double Dissipation is one of the earlier Tahiti Pro GPU based cards to reach our office. Measuring close to 27cm in length, it's identically sized to the reference Radeon HD 7950 and the last generation Radeon HD 6900 series. As its name suggests, it is XFX's top model which is massively overclocked; in fact it has clocks that rival that of the Radeon HD 7970. The XFX R7950 Black Edition has its GPU overclocked by 100MHz to 900MHz and its video memory is rated at 5500MHz, an increase of 500MHz from the factory default rate of 5000MHz. Considering that a Radeon HD 7970 reference graphics card is rated at 925MHz for its GPU and 5500MHz for the memory, it would seem that the XFX card can come close to rivaling it. But don't forget that the Radeon HD 7950 GPU has only 28 Compute Units (CU) versus 32 on the more powerful 7970 model. This disparity means there is a total of 1792 stream processing units active instead of 2048 and that would definitely add up to performance differences.

In this review of the XFX card, we'll find out just how much better is it over a standard Radeon HD 7950 graphics card and how close (or far) is it from a more pricey Radeon HD 7970 graphics card. Given the XFX R7950 Black Edition Double Dissipation card's similar clock speeds to a 7970 GPU model, it would also be interesting to see how the latter's four more CU engines contribute to overall performance (and one more render back end unit).

Even though the same reference cooler serves the needs well for both the 7970 and the 7950 GPU models, XFX opted to equip its R7950 Black Edition Double Dissipation with a better cooler to help overclockers get more out of the card. Its cooler design consists of dual 40mm fans blowing over its large radiator heatsink. The entire heatsink is encased by a metallic shroud that gives the card a sleek and streamline facade. XFX has named its special cooling solution "Double Dissipation" and the fans are supposedly dust-proof, ensuring their optimal performance when cooling the heatsink.

Write a Review
Compare This | Specifications
Stellar performance to challenge 7970 GPU
Good cooler design
Thrifty power consumption
Heatsink has poor fit over some memory chips
Our articles may contain affiliate links. If you buy through these links, we may earn a small commission.
Sponsored Links