Note: This article was first published on 11th April 2017.

Into the age of flash 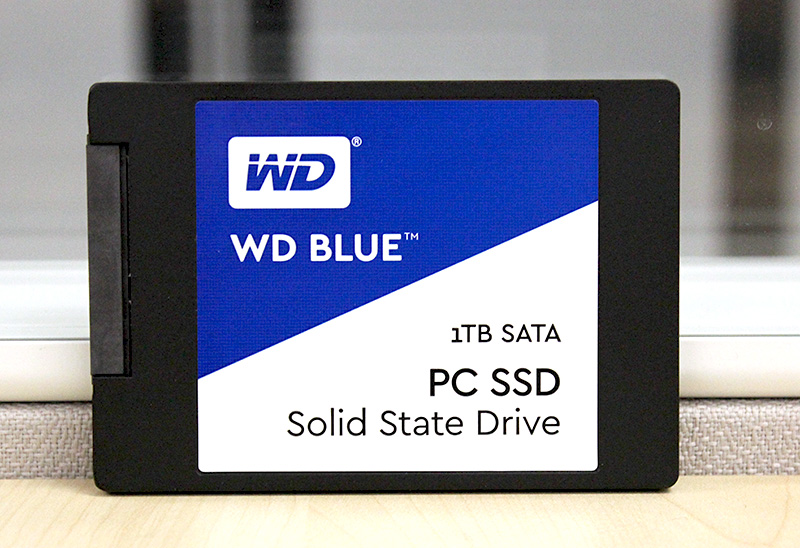 A decade ago, the future of flash was shaky and still a little unpredictable. In theory, flash drives would be quicker, but the earliest SSDs were a little erratic in terms of performance. Fortunately, any doubts were soon erased when Intel released the Intel X-25M SSD back in 2008. Today, even the most pedestrian entry-level SSD would run rings around the fastest hard disk drive.

While SSDs are undeniably quick, hard disk drive manufacturers like Western Digital and Seagate were quick to point out that they are expensive and offer little capacity. But things have changed quickly over the past decade. In 2008, an 80GB Intel X-25M SSD would set you back - you want to sit down for this - US$595. Using historical exchange rates, that’s S$845. Do the math and that works out to an eye-watering S$10.50 per gigabyte. 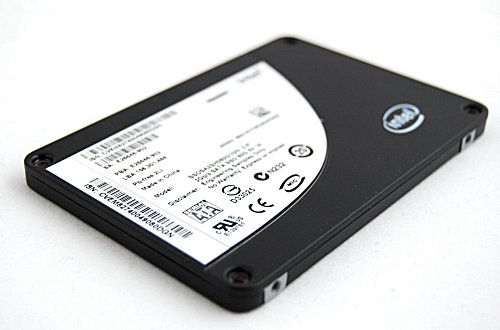 Fast forward to today and a 250GB SSD only costs about S$150, which works out to 60 cents per gigabyte. It is incredible how much prices of SSDs have fallen. Even so, hard disk drives still have the upper hand in terms of outright capacity and cost per gigabyte, but the performance benefits of SSDs make them a far more attractive proposition, especially for performance critical applications. Besides, if SSDs continue on their current trajectory, it won’t be long before we see even higher capacity and more affordable SSDs.

Western Digital, the world’s largest manufacturer of hard disk drives, is not oblivious to this trend and in the middle of last year completed one of their most important acquisitions in the history of the company. In May 2016, Western Digital finalized the acquisition of SanDisk, one of the world’s leading producers of flash memory, for US$19 billion. With SanDisk under their fold, Western Digital has instantly become a major player in the flash memory business. And they have wasted no time in attacking the consumer SSD market when in November last year they announced their new WD Blue and WD Green SSDs. We have the WD Blue SSD with us, so let’s find out how if it can challenge established players like Samsung and OCZ in the crowded consumer SSD marketplace. 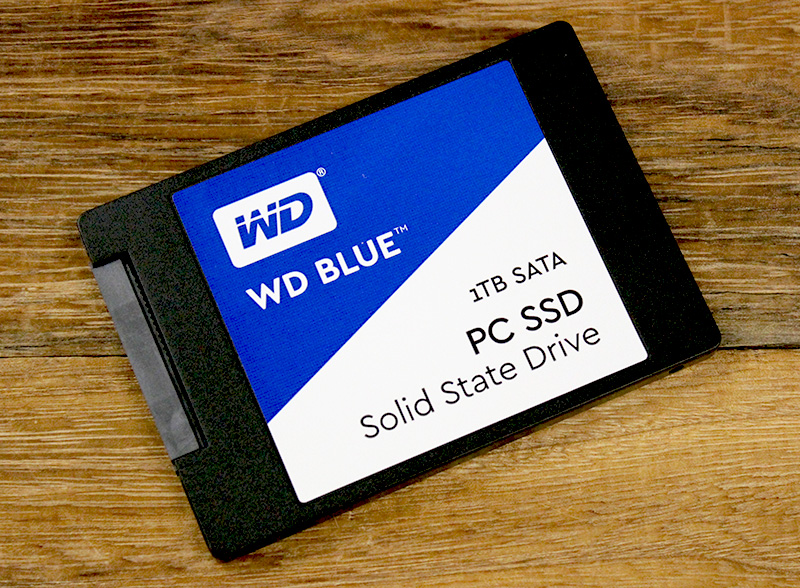 Much like WD’s hard disk drives, their range of SSDs are also categorized by colors. The WD Blue is their mainstream SSD, whereas the Green is their entry-level SSD and the Black is their high-end enthusiast-grade SSD. The WD Blue comes in two form factors: the standard 2.5-inch SATA form factor and as an M.2 2280 stick. Regardless of form factor, all WD Blue SSDs will support the SATA 6Gbps interface.

The WD Blue SSD is offered in three capacities: 250GB, 500GB, and 1TB. Inside, you’ll find a Marvell 88SS1074 controller - also used in numerous other SSDs such as the Plextor M7V - and 15nm TLC NAND from who else but SanDisk. SSD enthusiasts will probably notice that these components are similar to the SanDisk X400. Indeed, they are, but the WD Blue SSD uses a different firmware and sets aside more space for over-provisioning. One thing to note is that the WD Blue SSD does not support hardware encryption. If this is important to you, you will need to look at alternatives that do, like the Samsung SSD 750 Evo. 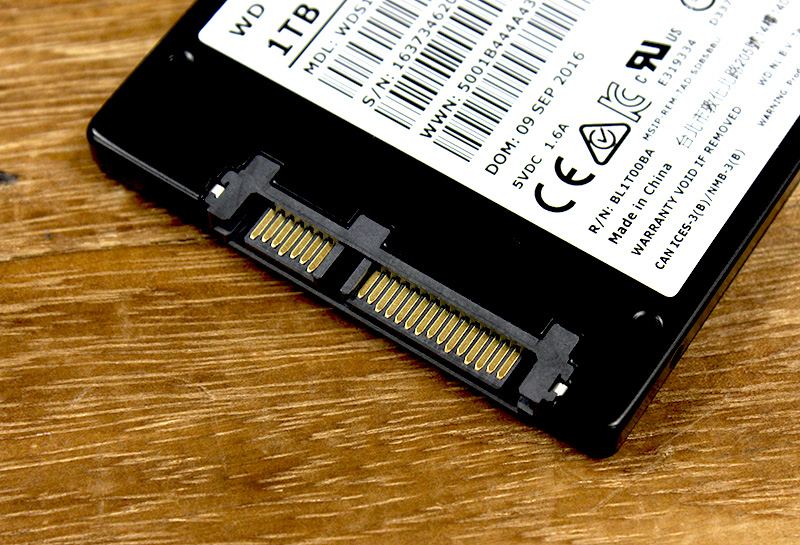 However, what is interesting is the WD Blue SSD’s claimed endurance. For the 1TB drive that we have here, the rated endurance is a very impressive 400TBW, which is more than double that of a Samsung SSD 850 Evo of similar capacity. In fact, it is even more than the Samsung SSD 850 Pro, which is one of the few SSDs to boast of a 10-year long warranty. It is only bested by the Plextor M7V, which we noted in our review for having some of the highest rated endurance we have ever seen for a TLC NAND SSD.

Here is a table comparing the endurance of the WD Blue SSD with other comparable SSDs.

Finally, the WD Blue SSD also comes with its own drive management utility called WD SSD Dashboard. It is straightforward and easy to use, and lets users quickly monitor and check up on the status of their drives, and also perform maintenance tasks like updating its firmware and checking on its performance. 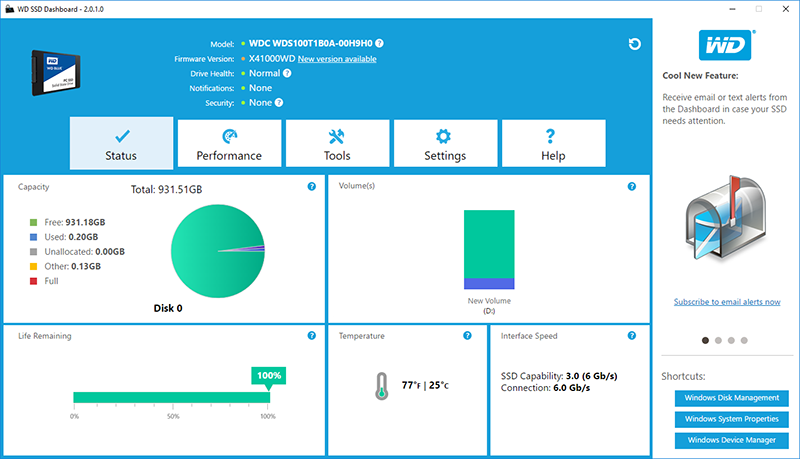 So far so good, the WD Blue SSD certainly looks promising so let’s find out how it fares over the next couple of pages as we put it through our usual benchmarking tests.

Write a Review
Compare This | Specifications
Good read performance
Incredibly high endurance for a TLC NAND SSD
Competitively priced
Available in two form factors
Write performance suffers at high queue depths
No support for hardware encryption
No accessories
Only 3-year warranty despite high rated endurance
Our articles may contain affiliate links. If you buy through these links, we may earn a small commission.
Sponsored Links