Warhammer: Odyssey (Mobile) Review: A traditional MMORPG that doesn't bring anything new to the table

Slow down there, buddy 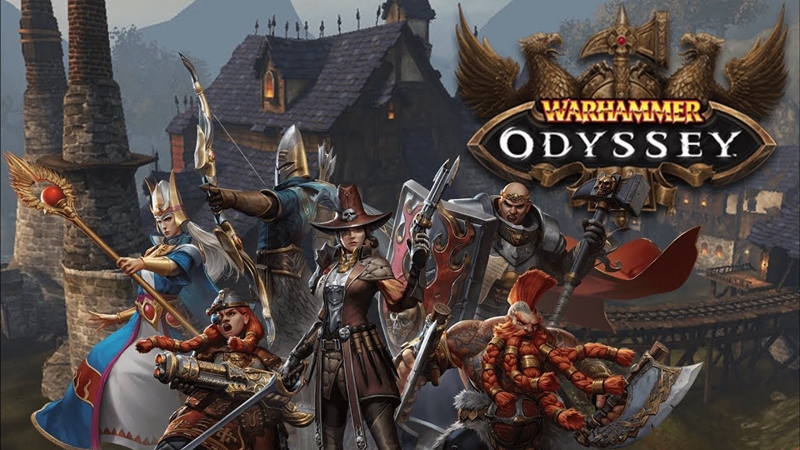 Alright, recruits - first things first. If you waltzed into this game expecting to bulldoze the A.I. and go to bed each night feeling superbly overpowered, then I regret to inform you that you're probably lost, and the nearest town is that way. However, if you don't mind putting in the work, earning your keep and taking your time to explore what the game has to offer, then climb aboard Warhammer: Odyssey - you're in the right place.

Developed by Virtual Realms Ltd., Odyssey is an old-school medieval fantasy MMORPG for mobile devices set in the Old World of the Warhammer franchise, and by old-school, I mean it's really traditional. Like, grind-your-socks-off traditional.

Anyway, considering that the game itself is remarkably straightforward and clear-cut with regards to its mechanics and concept, I'll also be keeping the review rather blunt. Notably, the one point I feel I can't stress enough is that players shouldn't embark on this adventure expecting to feel rewarded at every point along the way - that's not how things work in this part of town.

Stop and smell the roses, guys

Of course, I'm not saying Odyssey is utterly devoid of a "sense of accomplishment" - it'd be an awful game if it were. Rather, the satisfaction comes in a way that many of us just aren't used to nowadays. You see, many of our "modern" video games are all about embracing "the heat of the moment", and developers keep us engaged by constantly showering us with spanking new abilities and things to try out. That's perfectly fine, of course - there is a lot of fun to be had in feeling like you can take on an army by yourself like in Borderlands, and yet, we've become so accustomed to such approaches that many of us have forgotten the simple satisfaction of completing "a hard day's grind".

It's an interesting phenomenon, and I will confess that I am guilty of having such expectations myself, which is why I found my initial Odyssey run far from enjoyable. In hindsight, though, I feel that all we might need to enjoy Odyssey is to just take our time, and by that I also mean stop expecting the game to carry you through. Simply put, this is one of those games where you'll only hate it more the faster you try to power through, but once you calm down and enjoy the journey for the sake of it (which is the point), that's when the game's true beauty will start to reveal itself.

However, let's put aside all that "nagging". Since you're already here, you should at least know what you're signing up for, so let's talk about that.

I'll be honest: the game is a pretty standard one when you look over the general scope of its offerings, but that means there aren't any unnecessary bells and whistles to complicate matters. From class-based character systems and player-run auctionhouses to health and magic gauges and even an equipment durability mechanic, nobody's going to blame you for thinking "I've been there and done that.".

As mentioned, however, simplicity does have its merits too - it shouldn't take you too long to figure out how things work in Odyssey, which is great, although I will concede that the auctionhouse system (shown above) can be a tricky obstacle for first-timers to surmount.

Let's go over the classes as well. At launch, the game presents you with a choice between six classes: Archmage, Engineer, Shadow Warrior, Witch Hunter, Warrior Priest and Slayer. Naturally, each of them features their own battle style, and once you reach level 10, you'll be able to choose between one of two battle specialisations. In my case, I went with a Witch Hunter because I thought they looked cool (duh), and then selected the Sigmarite Templar route so I could double down on melee attacks and critical hits.

In that sense, I do appreciate that the game provides each class with multiple options to better suit each player's style and diversify the playing field, but it might have been better if re-speccing your character allowed you to choose a different specialisation too.

Beyond that, there are also six stats that players can invest into as they progress. Each level you gain awards you six points to allocate into Weapon Skill, Accuracy, Initiative, Wounds, Focus and Leadership. The game provides a description of what each stat improves, but if you don't really feel like poring through those, there's also an auto-assign function you can use. Apart from that, you don't really have to worry too much about stats, which is a godsend for me - I personally dislike games which try to be detailed at the cost of stressing players out over which stat investment is a better choice. After all, I'm playing the game to relax, not to tear my hair out in frustration.

As for the general flow of the game, it's (regrettably) quite run-of-the-mill too. Specifically, you'll mostly be doing what you'd expect to do in a fantasy MMORPG - talk to NPCs, accept main and side quests, party up with other players and grinding mobs for experience. There isn't really much to debate here since Odyssey doesn't bring any new mechanics to the table (a big bummer), but there is something curious that might happen.

Speaking from experience, I do recall having a rather unpleasant first impression of the game because it felt so slow and generic. However, the weird thing was that I couldn't seem to put it down, even as I was going back and forth between the same NPCs for quests and smirking at how grindy and unbalanced it was. I did, however, have no issues petting the dog.

Actually, this is a good time to clarify my biggest gripe with Odyssey: the game can be pretty (read: amazingly) unfriendly to solo players, especially in terms of how its monster system works. Whenever you encounter an enemy, it will have an allocated level as well as what I'll term a "Skull Level". The level is just a rough estimate of the enemy's strength relative to yours, but the Skull Level is what you really should be looking out for, and the more they have, the more firepower you need to bring. In fact, any mob around your level with three skulls and above will require a two-or-three man party to defeat, but even mobs with two skulls can be a pain to deal with if they gang up on you, and unfortunately, they spawn quite often.

Building on that point, it doesn't help that all mobs have the usual MMORPG "aggro range", and there are cases when you might accidentally kick the bucket on your way back to an NPC - I really hate such situations because it also depletes your equipment's durability for no reason. TL; DR: Get used to dying and respawning folks, because you might be doing it quite often.

Fantasy lovers, this is your stop

Last but not least, let's talk about the aesthetics and the audio, and amusingly, this kind of falls into the same boat as the gameplay. It's pretty freaking generic, but heck if you don't start to fall in love with it as you go. From built-up castle towns to dark, shadowy forests and so much more, the Old World hides many secrets for players to slowly uncover and explore, and the best way to do that? Don't rush it!

The medieval fantasy flavour in Odyssey might not impress you within the first hour or two, but as you continue playing, you might start to feel a certain sense of nostalgia the more you commute between the various locations. Amusingly, making the daily trip to the Rijkspoort Exchange to check on auction prices almost feels like I'm popping out to my local grocery store - there's an odd familiarity that I can't really explain.

However, I will admit that the variety of animations and sounds could use a bit of work. Right now, we're mostly stuck with the usual sounds of swords, crossbows and magical zaps you'd expect from stuff like Lord of the Rings, and having to hear that same sound hundreds of times over the daily grind can make the process feel a lot more tedious than it actually is. While my gut feel does tell me that the developers will expand on these in future given the game has just soft-launched, I still believe it's worth mentioning right now in an era where video games are becoming increasingly flashy.

At the end of the day, I feel Warhammer: Odyssey is a rather difficult game to grade, mainly because its pros and cons can go either way depending on who's playing it. In short, some people might be satisfied with the game's completely traditional approach to the genre, while others might prefer it to have a more "modernised" approach to mechanics and suchlike. And that argument will probably go on long after the cows have come home.

Personally, I'm kind of on the fence here. I've slowly become accustomed to the simple pleasures of grinding mobs and looking forward to the next level-up, and yet I can't help but feel that the game could use a lot more work. In that case, perhaps it's just average for now - the game's traditional approach to the genre is both its strongest point and its weakest link. Still, what I do know for sure is that if the developers were to properly balance items and levels and generally make the game less punishing especially for newer players, I would have no qualms giving it a higher score. However, as things stand, I'm inclined to admit that it's not really here nor there.

Write a Review
Compare This | Specifications
Can be fun if you don't rush through it
Gameplay and progression mechanics are straightforward and easy to grasp
Classes are reasonably diverse
Aesthetics are decent if you don't set your bar too high
Seeing someone snag your item for its buyout price is sheer bliss
Features an extremely vanilla MMORPG gameplay package
Some side quests can be downright impossible for solo players
Equipment and weapon balancing needs some work
Shadow Warriors are broken. 'Nuff said.
Our articles may contain affiliate links. If you buy through these links, we may earn a small commission.
Sponsored Links