The vivo V7+ runs a skinned build of Android 7.1 Nougat, called Funtouch OS. Place it alongside a current Oppo phone and you'll find it's almost a mirror image of Oppo's ColorOS on the surface - and in essence, both these Android skins draw unashamedly from iOS, as you will have noticed from the Settings icon and the lack of an app drawer. 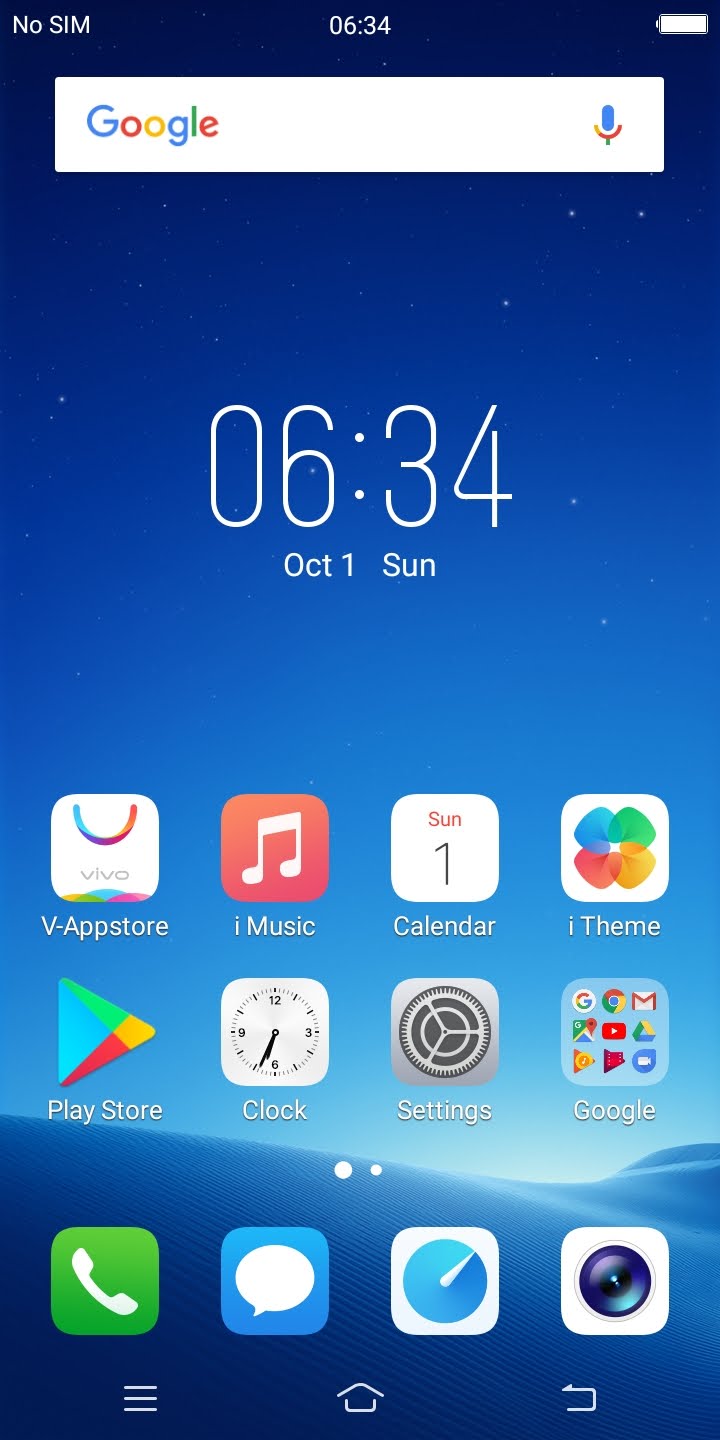 Funtouch OS is colorful and cheery, but it seems like a design that would have been in vogue several years ago. For starters, it is riddled with design inconsistencies (the most obvious being the extremely detailed Settings icon versus the flat "iMusic", messaging, dialer, and browser icons), and the English language seems to have been lost in translation in parts: 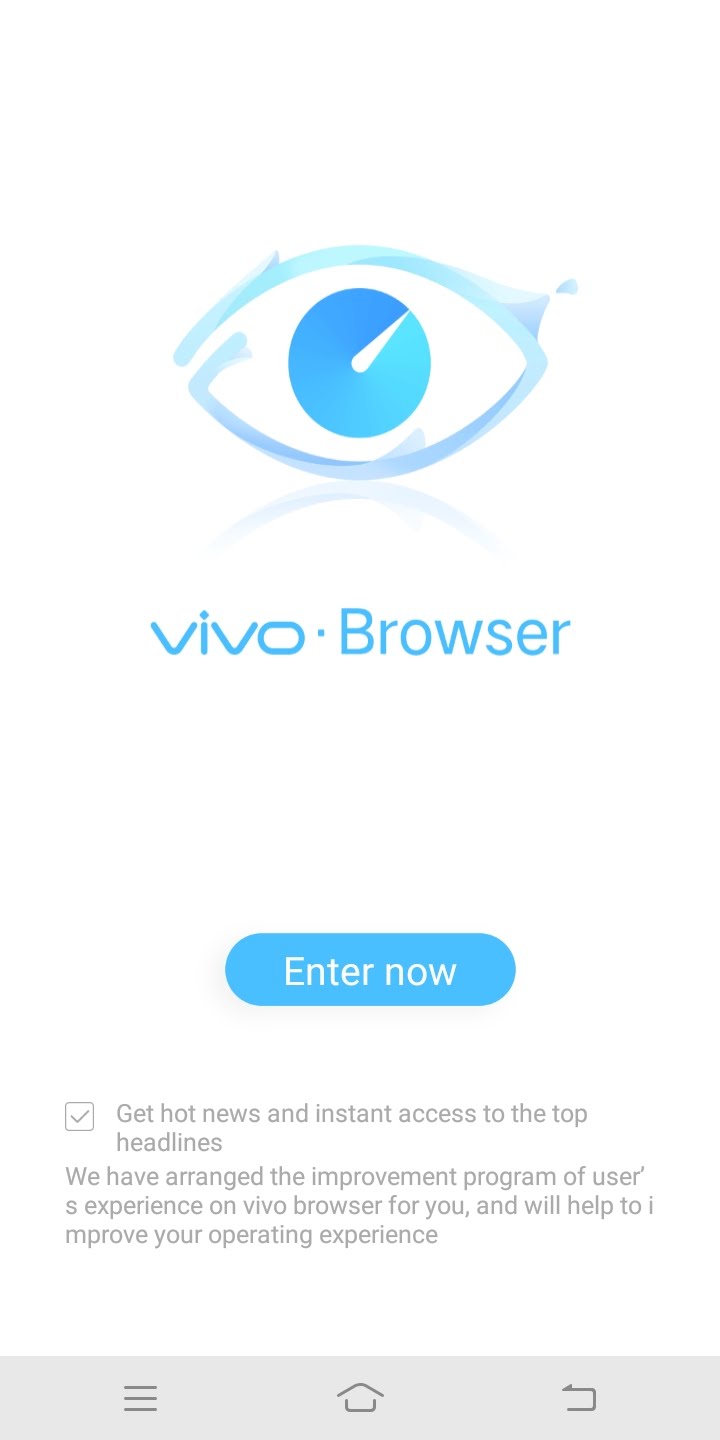 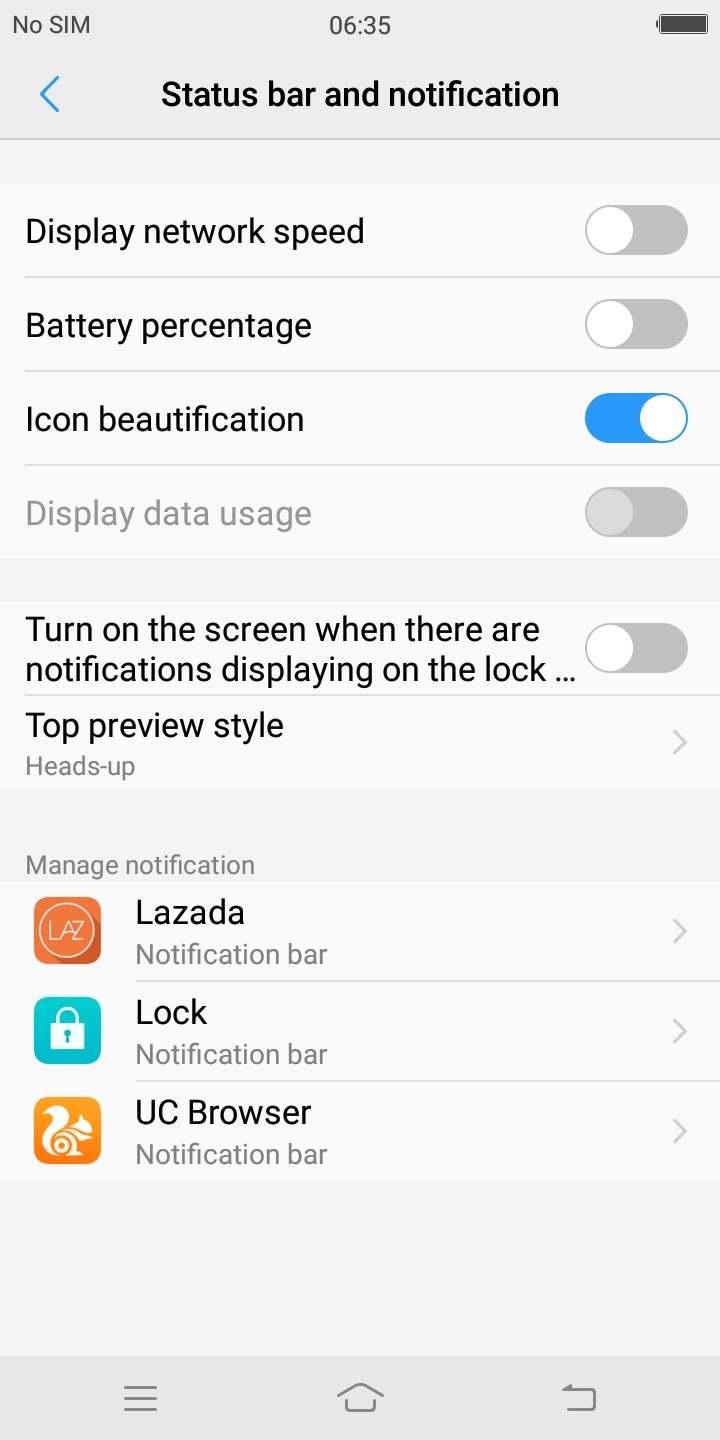 The lock screen also displays an alternating and incongruous mix of extremely vibrant and detailed landscape, floral/food, and car wallpapers, which seem brash and loud against the gentle bokeh-style gradients and "earth shots" you'll find on the latest Android Oreo phones. Not to our taste, but then again, no deal-breaker either.

What is irritating is that Funtouch OS strangely and inexplicably lacks some features which are not only found in stock Android, but are now staples on many Android skins in general. For example, there are no settings when you slide down the notification shade. Nope. Nada. Nyet:- 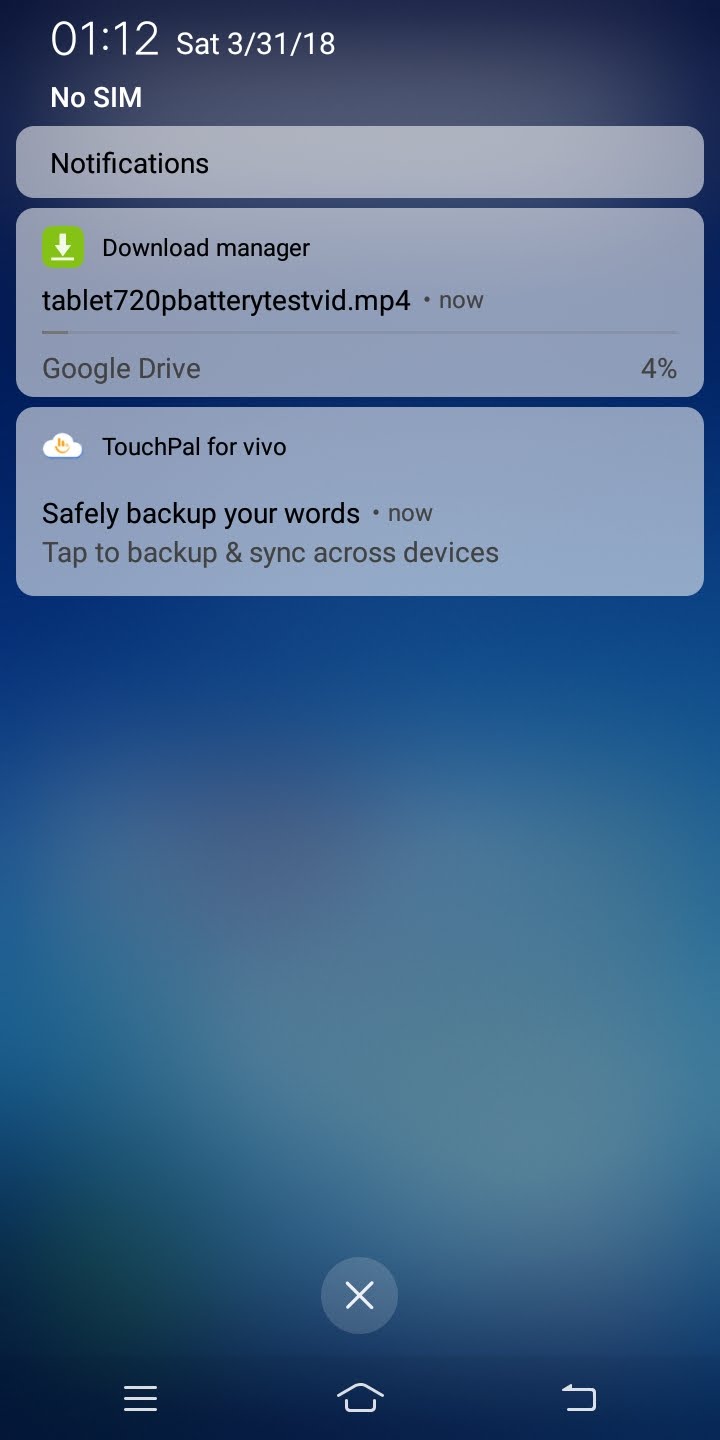 And when you go into the Battery setting option, there's no way to view the estimated battery life remaining - just a "Rank" option for individual apps:- 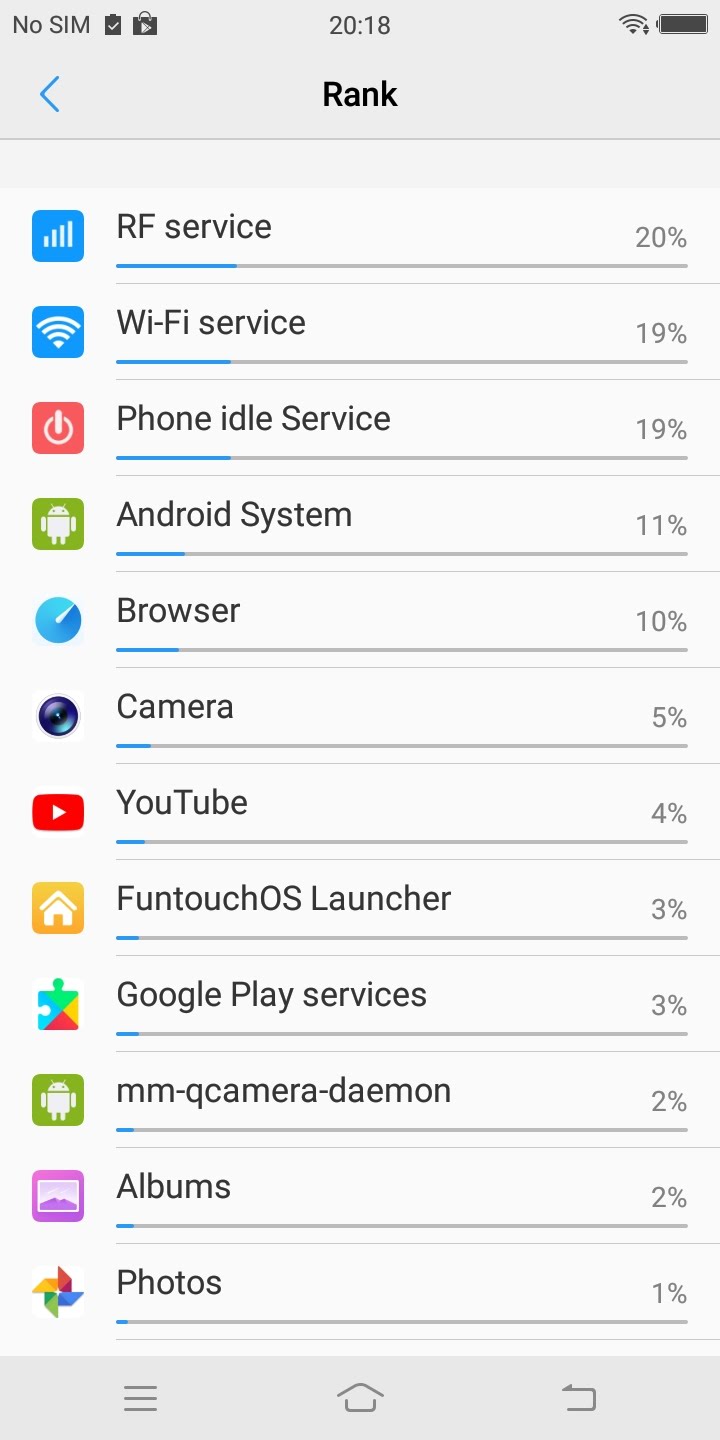 That said, some of the add-ons that vivo conceived for Funtouch OS, at least on the V7+, mirror what you can find on, say, an equivalent Samsung smartphone. There are various "Smart motion" gestures to turn on and off the screen, launch apps, and what have you. One-handed operation is also possible with a gesture-controlled keyboard resize and "mini screen" mode. You can "clone apps" - start two instances of the same app, which some will find useful for privacy reasons. There's even split-screen support, albeit for a limited selection of apps (Chrome, Gmail, Calculator, YouTube, VLC, and the stock messaging app and video player being examples.)

Also, on the plus side, we're happy to report that the only third-party apps we found when we powered up for the first time were Lazada and UC Browser. But this bloat hygiene is countered by a number of vivo's own apps: a system manager, a weather app, a cloud storage app, a sharing app, a shortcut to vivo.com (why?), a screen lock shortcut (double why?), a compass, and even an alternative app store called V-Appstore.

Perhaps Funtouch OS is aimed at seniors, who might be new to a smartphone and would certainly appreciate starting off with a large number of apps and a cheery interface. But the UI inconsistencies and dated design certainly need fixing. Again: it's 2018.

SunSpider JavaScript measures the web browsing performance of a device through a JavaScript processing test. It not only takes into consideration the underlying hardware performance, but also assesses how optimized a particular platform is in delivering a high-speed web browsing experience.

This is where things start to come undone for the V7+. Earlier, we mentioned that there is competition aplenty. What has not yet been said is that most of them employ the faster Snapdragon 6-series processors. Accordingly, the ASUS ZenFone 4 Max (which has a 4-series Snapdragon yet costs over $200 less) accompanies the V7+ at the bottom of the SunSpider tables: 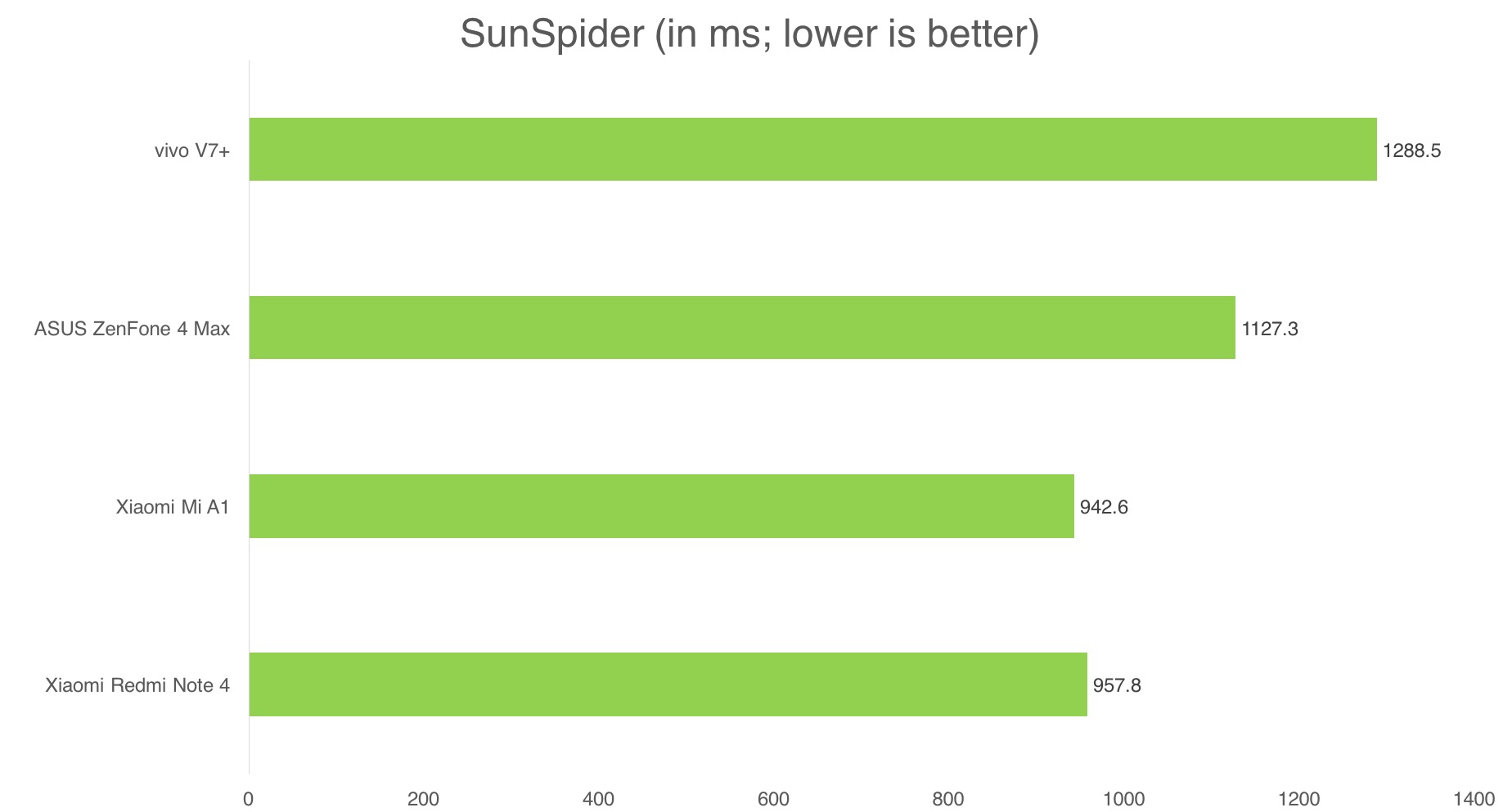 Exactly as expected, the slower 4-series processor placed closer to the ZenFone than the two 6-series phones.

A surprise is sprung! The Snapdragon 450 almost keeps pace with the Mi A1 and the Redmi Note 4 in this test, thanks to Qualcomm having plumbed in the Adreno 506 GPU found in the 6-series units.

But in real-world usage, the vivo V7+ still made us think "series-4" rather than "series-6" Snapdragon. Apps took a bit longer to open than we would like, and scrolling in web pages was frequently interrupted by jitter. Thank goodness for the HD-resolution display, which surely goes some way to keeping the overall performance of this device within acceptable margins...