Two Point Campus (PC) review: An easy "A" on the test

Two Point Campus (PC) Review: An easy "A" on the test

Note: This article was first published on 12 September 2022. It's well-understood that most kids don't see school as an enticing concept. Or, at least, I know I didn't, and in hindsight, perhaps that's why I ended up doing stuff like this in the first place.

Humour aside, while I didn't quite give a hoot about my own education back then, I'm having loads of fun managing other people's in Two Point Campus. Building on the success of its scrubs-and-stethoscope-wearing predecessor, I'm happy to announce that Two Point Studios has come up with yet another snarky (but immensely enjoyable!) management sim.

In other words, if you think you can do a better job running a school than old Mr or Mrs. Whatever-their-name-is, you're perfectly welcome to try. But frankly, you'll probably enjoy yourself even if the institution goes up in a mushroom cloud of debt and employee dissatisfaction. Straight off the bat, the single biggest thing I've come to adore about the Two Point games is how they're able to keep gameplay concepts simple, yet unpredictably dynamic. After all, managing hospitals or schools aren't something people just "sign up for" in real life, so allowing everyday folks to be able to explore these complex industries while making it fun is no mean feat.

But the team has managed to do it, and with stellar results to boot. Right from the get-go, TPC equips you with all the necessary fundamentals of managing your educational institution while not holding your hand too much, and it's all presented in a manner that's easy to grasp and experiment with. Aesthetically, TPC adopts the same cartoonish, playful style as its predecessor which, rather amusingly, works in its favour for multiple reasons. Not only does it make the game somewhat appealing to younger audiences, but from a developer's perspective, it also means they can be more imaginative, like having classes on how to make gigantic strawberry cakes, or how they've implemented an entire level for a magic school.

Since we're on the topic of aesthetics, I think it's also worth highlighting how expansive the catalogue is when it comes to design. Admittedly, you won't have everything available to you from the start, but the early game variety, though relatively plain design-wise is far from meager. Naturally, as you go along and earn more Kudosh to unlock spicier inclusions, which aren't all that hard to earn, you'll be able to equip your school with more exciting features, like gothic bookshelves or clown chests. The click-and-drag design interface is really easy to work with, and if it's all going a little too fast for you, just hit the pause button to work out the chinks at your own pace.

Class is now in session 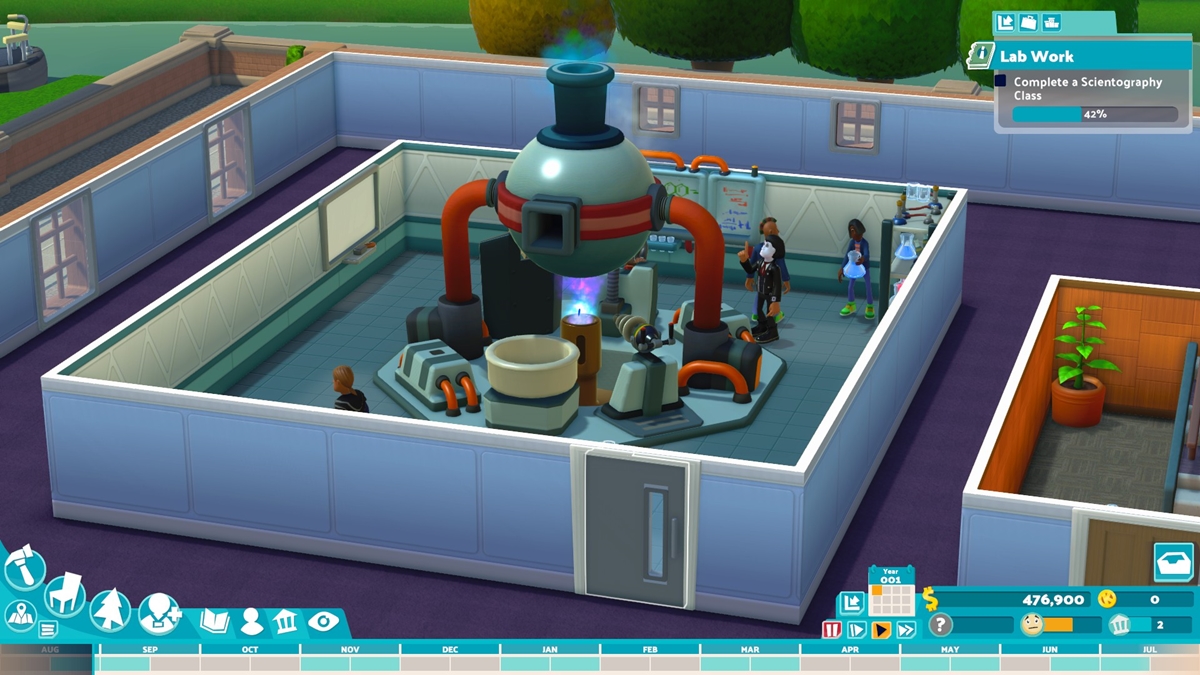 This leads into the gameplay aspect, and though it's quite simple at first glance, it can also be devilishly intense when it wants to be. Fundamentally, you'll need to take care of the needs of both students and staff (duh), which means building toilets, workshops, break rooms, dormitories, and even hosting the odd party for them. TPC starts off with relatively standard-fare stuff in the first two or three levels, like hygiene inspections or students requesting a particular piece of furniture, but when you hit the "higher echelons", like the magic and jousting schools, it gets fun because you'll have to prepare for odd challenges like ambushes from rival schools.

Naturally, you can't just plug down one set of each room and call it a day too, and there are cases where you will have to be resourceful not just with your spending, but with where you place different amenities. For example, if you've stationed a teacher with a weak bladder far away from the nearest toilet, he's certainly not going to have a good time and employee satisfaction will fall faster than normal. Sure, you don't have to pay too much attention to each member per se, but having to care about these little things is what makes the Two Point games more intelligent than people assume them to be. It's also nice that you do get to exercise some control over them, such as being able to send individual members on break or for private tuition. As for gameplay progression, the metaphorical teacher isn't too strict about it, in that sense. Simply put, you won't have to clear every stage with three stars just to check out the next. For the most part, all you'll have to do is pass the 1-star objectives, though you should certainly grab the higher ones too. Speaking of which, I particularly like that you're able to pause a particular playthrough at any time to swap over to another level.

Despite the game remaining snarky and intense the whole way through, people will inevitably get bored hacking away at a tricky level after a while, so allowing them to hop over to an easier one to calm their nerves is a great judgment call. Plus, you'll even be able to carry on playing a stage after you clear all of the objectives, so your hard work and effort won't go to waste, and conveniently, there's also a Freeplay mode for you to check out at your leisure.

It's a fun ride all the way through All in all, Two Point Campus offers a surprisingly well-rounded and intriguing gameplay package, topped off with easy-to-grasp interfaces, a healthy amount of cheekiness, and an above-average degree of creative and explorative freedom. Admittedly, being a simulator title does mean that the game is inherently a one-trick pony, but I think it does the one job so well that even this flaw is rendered moot by comparison. In short, it's one of, if not the best starting point for anyone looking to get into management simulators in general, and so I've got no qualms giving it a big, fat "A" for the class. 9/10.

Interested in enrolling in this class? Check out the game's Steam page!

Write a Review
Compare This | Specifications
Extremely easy to pick and learn
Charming aesthetics and intuitive gameplay
It's challenging, but not overly strict
Lots of freedom to build campuses and explore as you like
It does start off a little slow
Our articles may contain affiliate links. If you buy through these links, we may earn a small commission.