Wireless 802.11ad is upon us, courtesy of the world’s first 802.11ad router from TP-Link, the Talon AD7200. But before we go on to talk about this router, it is necessary to first understand what 802.11ad technology is.

Wireless technology has come a long way. It was about 17 years ago that Wi-Fi took off thanks to the 802.11b wireless standard (and made famous by Intel Centrino Mobile Technology) which offered up to a maximum of 11Mbps of bandwidth. At this speed, a 1GB file would have taken over 12 minutes to download. Today, the fastest 802.11ac routers are capable of transmitting data at speeds of up to 2,167Mbps - or nearly 200 times faster than 802.11b. As a result, a 1GB file would take just less than 4 seconds to download. All of this is theoretically speaking, of course, we all know real world performance is often considerably lesser. 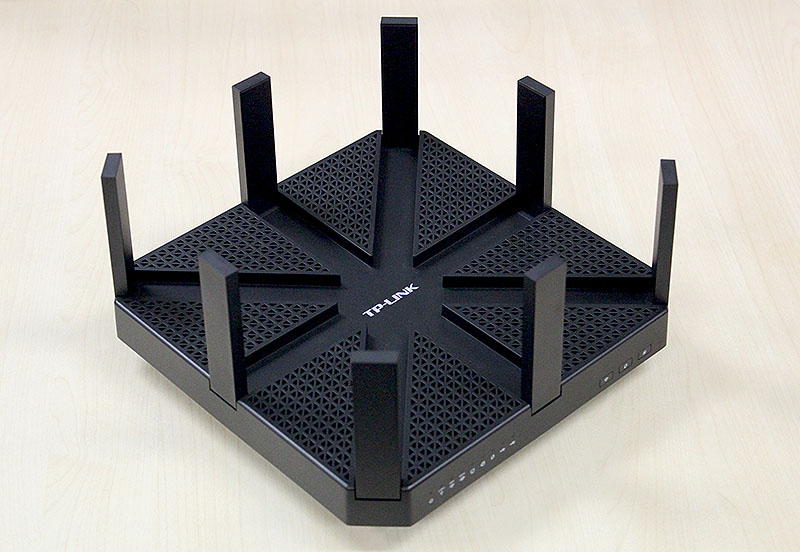 While 802.11ac is fast, it isn’t as fast as 802.11ad, the next step in wireless technology evolution. 802.11ad or WiGig is the newest wireless standard and it will operate in the stratospheric 60GHz frequency range. Broadcasting at this super high frequency gives it the ability to hit data transfer rates of up to 4,600Mbps, that’s twice as fast as the fastest 802.11ac routers and this is only for a start.

We are creating more content than ever, and the content that we are creating is more detailed than ever as well, which consequently means larger file sizes. Flagship phones can now record in stunning 4K resolution and cameras are capturing photos in greater detail than ever thanks to larger sensors with high megapixel counts. Now, we're pushing the edge with even 360 photos and videos creation. The more you create, the more you'll require to create backup copies, either within your home on a NAS or on a cloud service. In terms of consumption, don't forget the numerous music streaming services, and several video streaming options that entertain us for endless hours such as Viu and Netflix. Add all these creation and consumption requirements and multiply that with the number of users in your household and the number of connected devices, suddenly there's an explosion of data transferred within your home. There is therefore a need for a router that can keep up with all of this. Fortunately, 4,600Mbps is the equivalent of a whopping 575MB/s, and according to TP-Link, this is enough for users to download an entire feature-length 4K movie in just four minutes. It is also enough to transfer a thousand photos in just five seconds.

However, don't get too excited now. The high speed of 802.11ad comes with a crucial trade-off, and that’s range. The range of 802.11ad’s high frequency 60GHz networks could be as short as just 10 meters. And unlike 2.4GHz and 5GHz signals, 60GHz signals can be attenuated by as little as a thick sheet of paper. In other words, you’ll need a clear line of sight to be able to properly enjoy 802.11ad’s high-speed 60GHz networks.

So now that you have a better understanding of 802.11ad, let’s take a closer look at the TP-Link Talon AD7200 router itself. 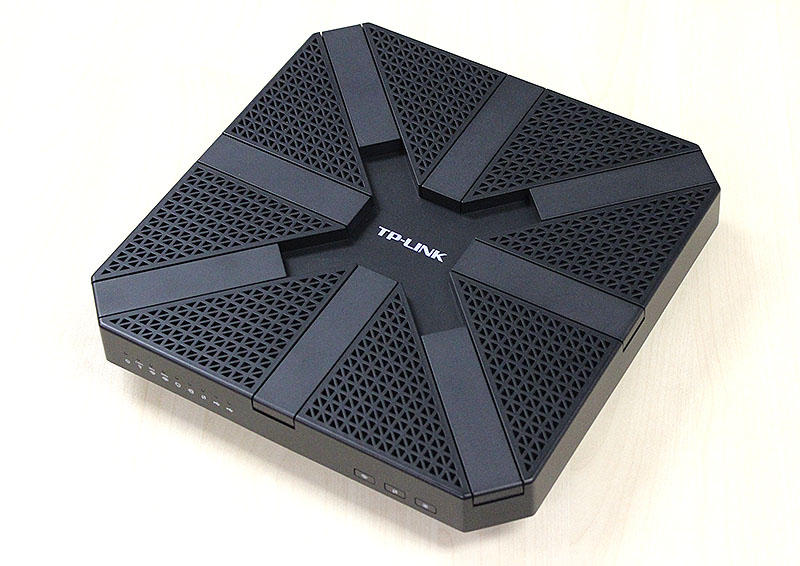 If you have read our AC3200 router shootout and seen the TP-Link Archer C3200, then the sight of the new Talon AD7200 router will seem familiar to you. 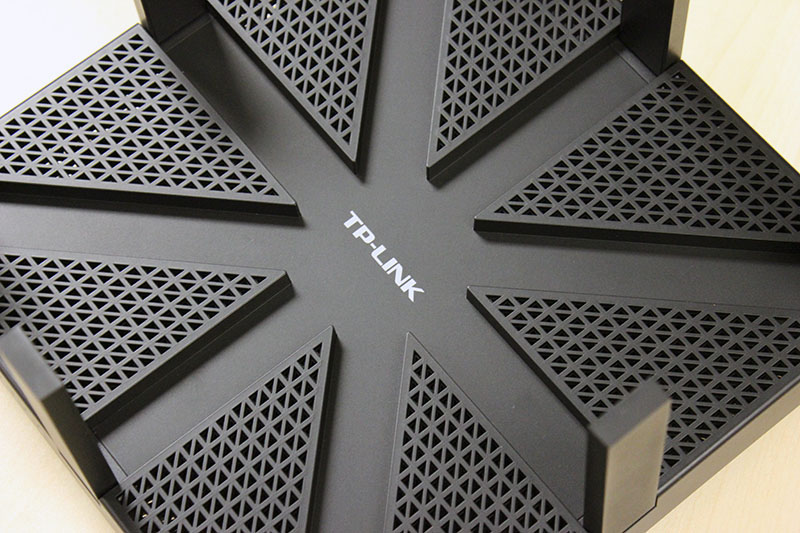 On the front panel is a row of LED status indicators, these indicators let users quickly see if anything is going wrong with their router. One thing we would have liked is for the Talon AD7200 to have individual indicators for the Gigabit Ethernet LAN ports. There’s only a single indicator, which means that if it goes off, you’ll need to spend some time to find out which exact port is the one that’s having problems. 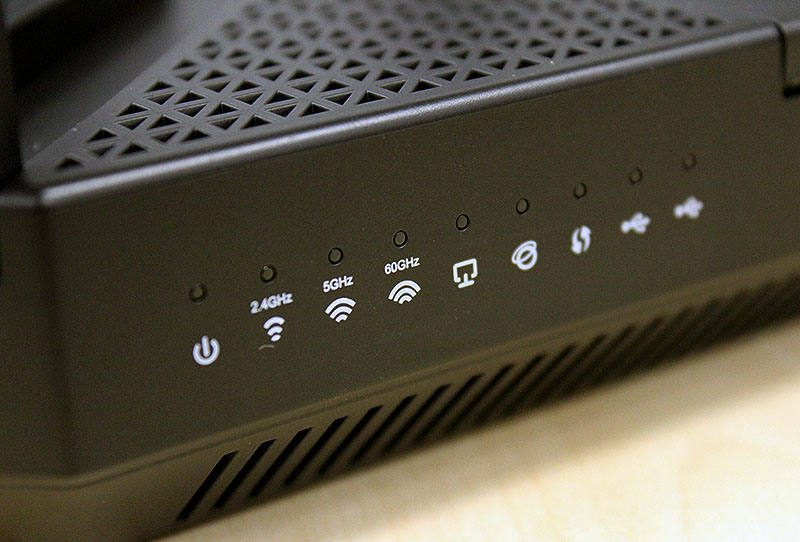 On the right side of the front panel are three handy buttons that let users turn the LED indicators on and off, turn the Wi-Fi on and off, and for WPS setup.

Turning the router around, we find the usual ports on the rear. There’s a single Gigabit Ethernet WAN port and four Gigabit Ethernet LAN ports. There’s also two USB 3.0 ports which can be hooked up to external storage devices or printers for file or print-sharing. 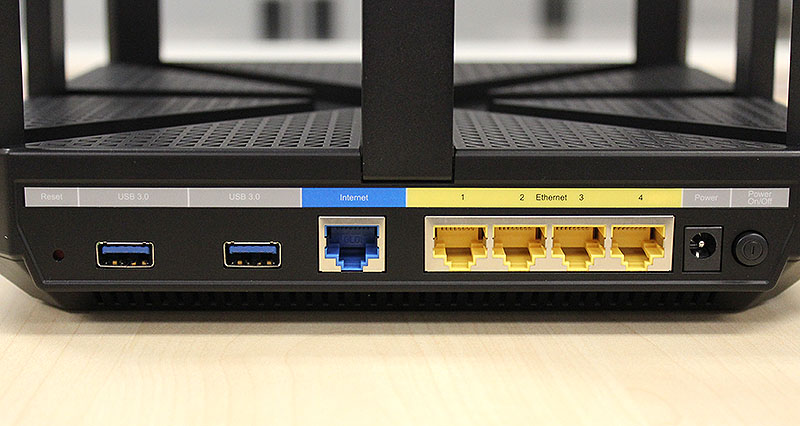 Inside, the Talon AD7200 is powered by a 1.4GHz dual-core Qualcomm IPQ8064 SoC. The four stream 2.4GHz and 5GHz radios are provided for by Qualcomm’s QCA9980 chipset, while the single stream 60GHz radio is by powered by Qualcomm’s QCA9500 chipset. MU-MIMO is supported on the 5GHz 802.11ac network, but not on the 60GHz 802.11ad network since it only broadcasts has a single stream. 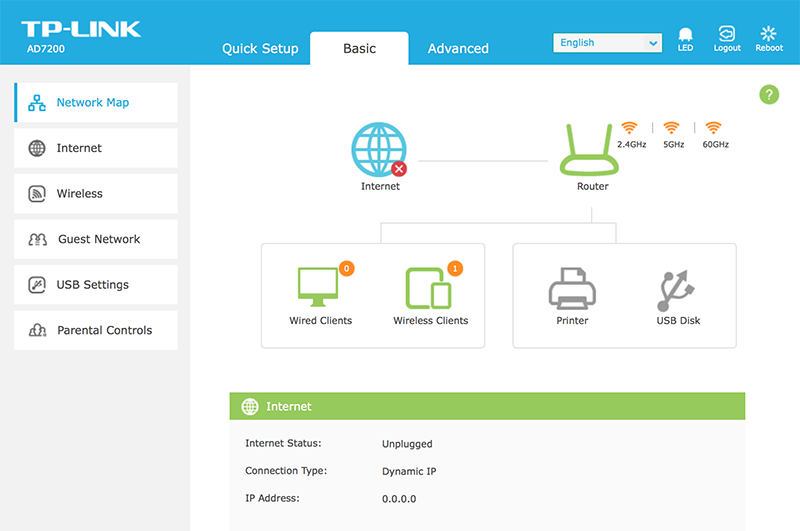 On the software side of things, we are happy to report that TP-Link has improved the setup interface of the Talon AD7200. Users can still choose from two main menus - Basic and Advanced - but some of the sub-menus have been tweaked to make setup easier.

For example, in our review of the Archer C3200, we remarked that setting up QoS was tedious as it required users to manually define the IP and port range of applications. In the Talon AD7200, the QoS rules can be defined on a device basis, meaning to say you simply specify which of the devices that are connected to the router should have priority over which. This is a much more practical and elegant implementation.

Owners of the Talon AD7200 will be happy to know that the router has all the other usual options like parental controls, port forwarding, dynamic DNS, VPN, and more. Overall, we found the Talon AD7200's setup interface to be fairly straight forward and powerful to use. It's not quite as polished as its rivals, but it gets the job done. 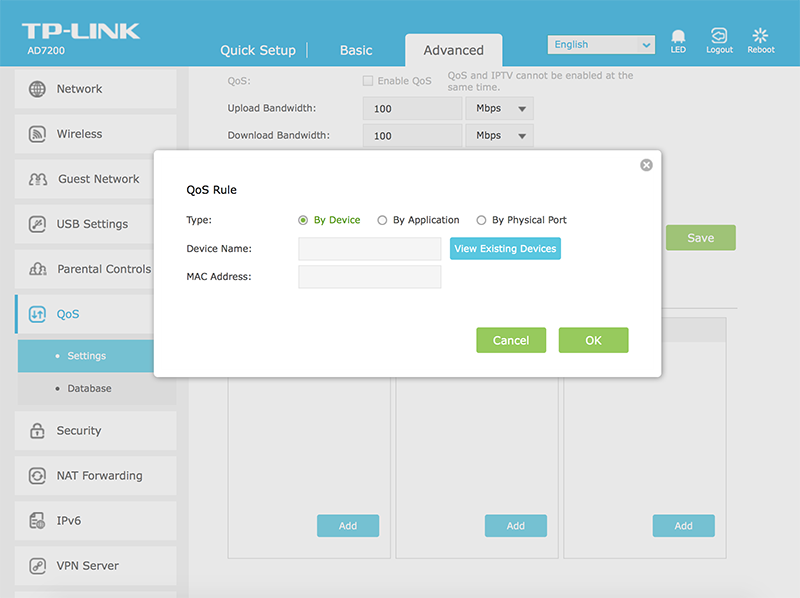 Finally, like most high-end routers today, the Talon AD7200 can also be remotely controlled and managed using TP-Link’s Tether app, which is available as a free download for iOS and Android devices. The app is a pretty basic one but it shows you a network map that lets you see devices connected to your router, also allows you to manage your Wi-Fi and guest networks settings, and also activate or deactivate your parental control settings. 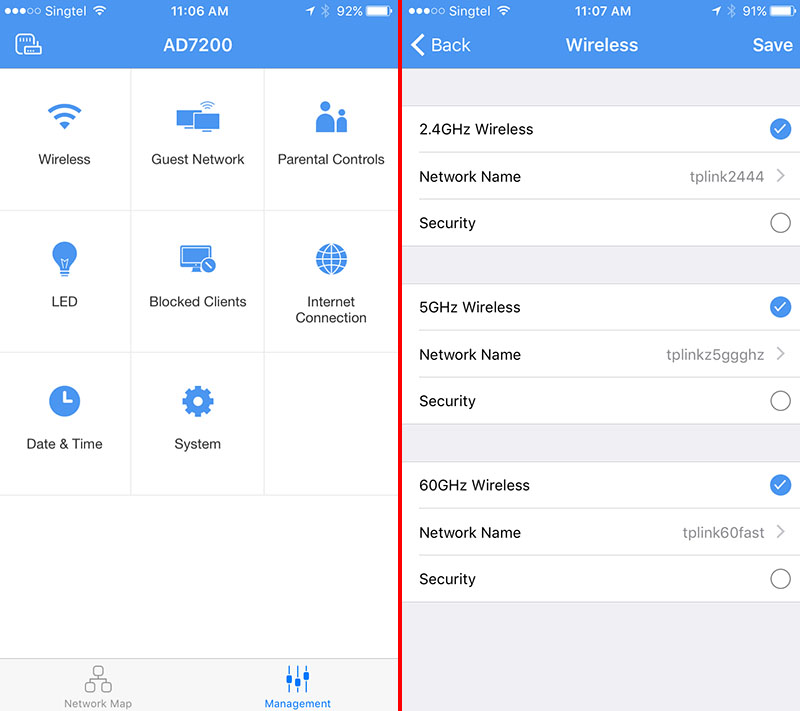 Write a Review
Compare This | Specifications
First 802.11ad router in the market
Incredible 60GHz performance
Decent 5GHz performance
Improved user interface
Early days yet for 802.11ad
Limited range and compatible devices
No cloud storage functionality
No LED status indicators for Ethernet ports
Pricey
Our articles may contain affiliate links. If you buy through these links, we may earn a small commission.
Sponsored Links