Are meetings the only way for hybrid workers to keep in touch?
Product Listing
AirTiesArloAskeyASUSAztechBelkinD-LinkEdimaxEnGeniusIgnition Design LabsLantronixLinksysProlinkRuckus WirelessSecurifiSMCSpotCamTP-LinkTRENDnetViewsonicZyXEL

So, how does it perform?

The TLDR version: Performance was mostly a mixed bag. The TP-Link Deco M9 Plus exhibited good range and provided good download speeds. Uploads speeds, however, was mostly quite disappointing. Overall, its performance was a match for the Linksys Velop and much improved over TP-Link's first mesh networking system, the Deco M5.

For the rest of you who like to pore over graphs, here they are. But first, a quick run through of our test setup.

To test this new breed of mesh networking systems, we've changed our test environment, but our test setup remains relatively unchanged. We have two notebooks, one acting as a host machine and the other as a client device. The router, or in this case, node, acts as a gateway. Since mesh networking systems typically manage channel settings on their own, we will leave it that way. For systems where manual settings are possible, a channel bandwidth of 40MHz is selected where applicable, while 80MHz or more is used for the 5GHz AC band.

Here are the different TP-Link Deco M9 Plus setups we used:

To further clarify, in tests where nodes were placed on the second or third floor, the measurement would be taken with the client device about two meters away from the node. Finally, included in the graphs are results of other mesh networking systems including the TP-Link Deco M5, Samsung Connect Home Pro, Google Wifi, Linksys Velop, and Netgear Orbi.

In this test, we will be looking at the performance of a single TP-Link Deco M9 Plus router in a single-story (using the different distance markers) and multi-story home. All other competitive mesh networking system results are also that of a single node setup. 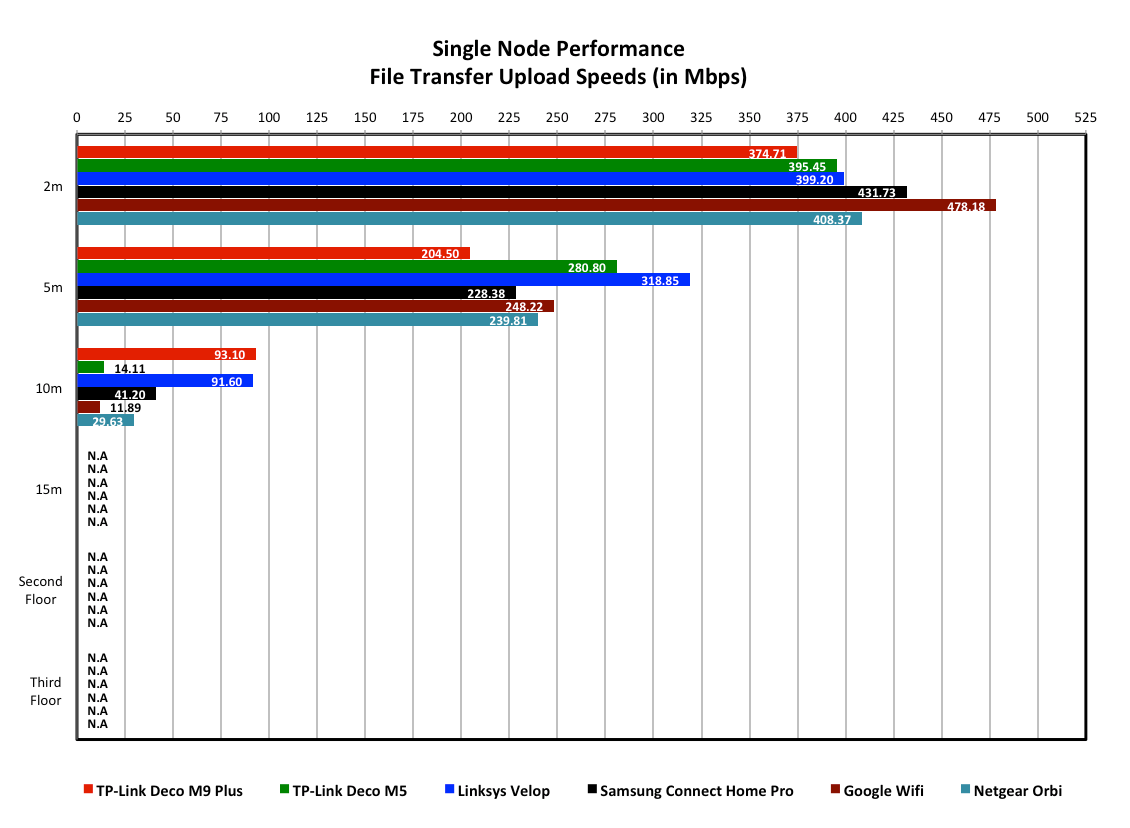 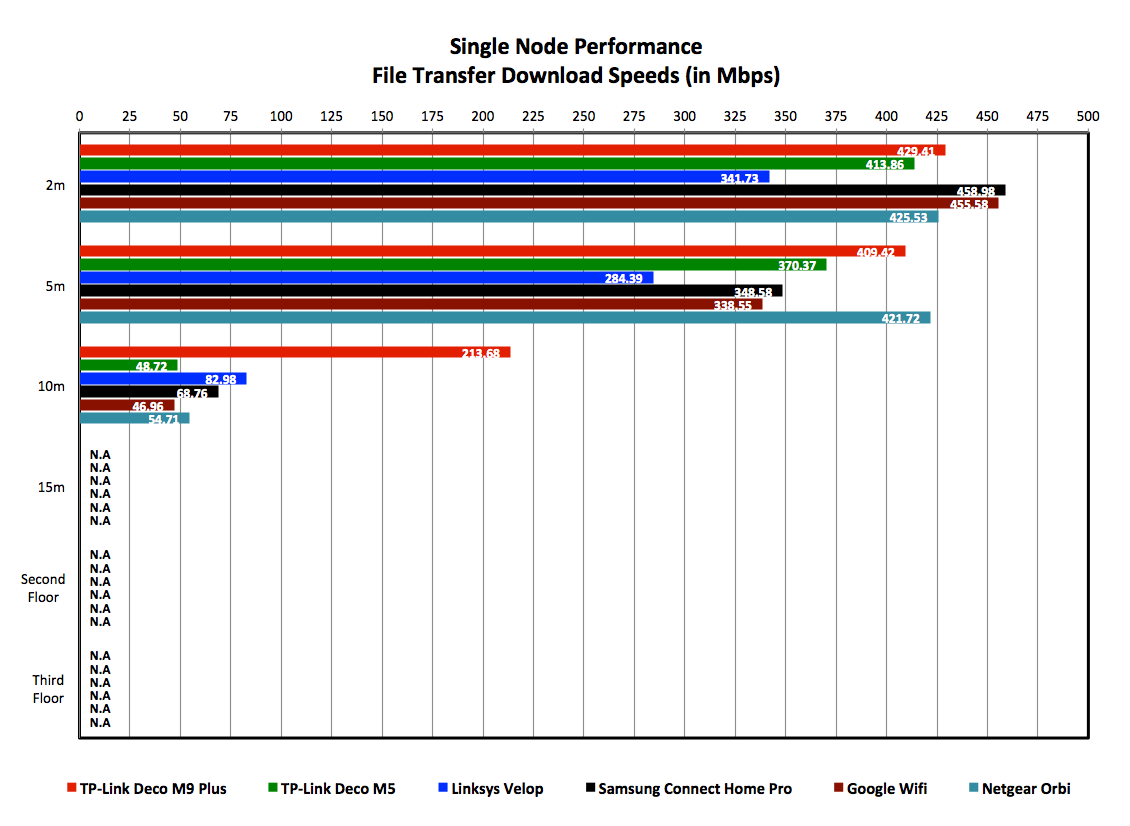 In this test, we placed a second TP-Link Deco M9 Plus node in between the first node and the 15-meter mark to create a mesh network to get signal to the problematic 15-meter mark. We did the same for other mesh networks to see how their performance would compare. 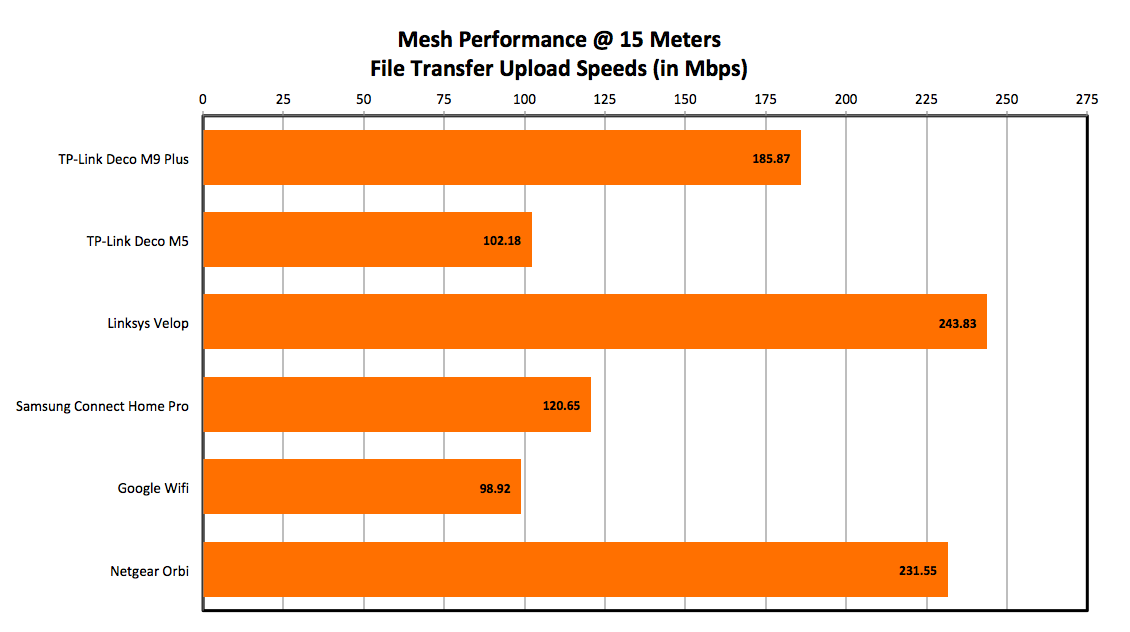 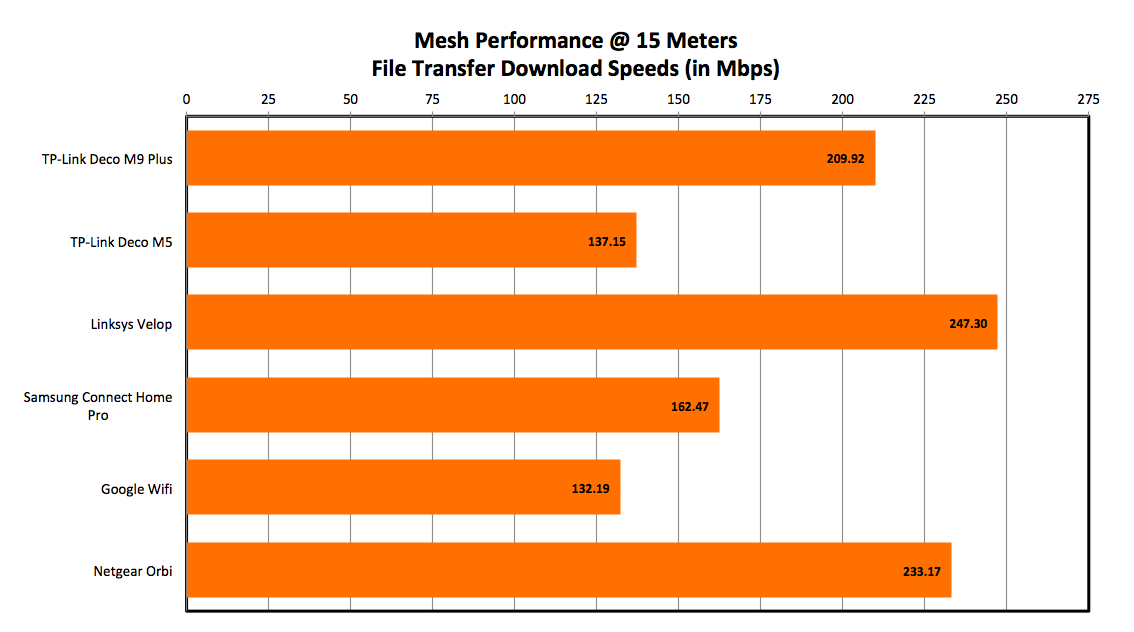 With a node in place, we got pretty respectable numbers. The Deco M9 Plus was clearly faster than the other dual-band mesh networking systems. However, it trailed slightly when compared to other tri-band systems like the Linksys Velop and Netgear Orbi. 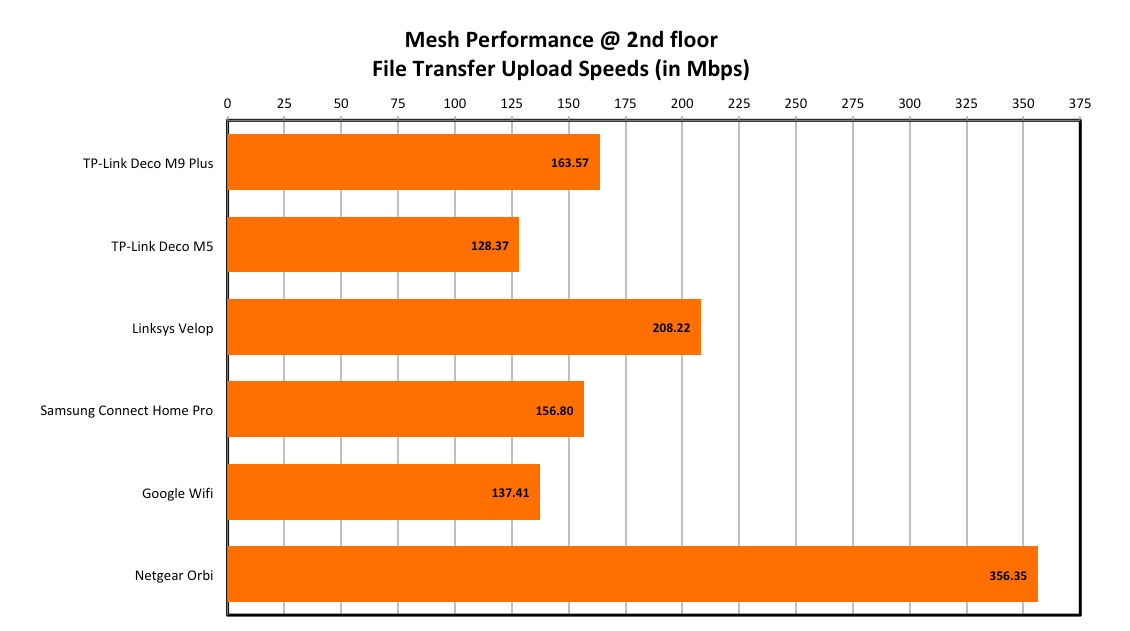 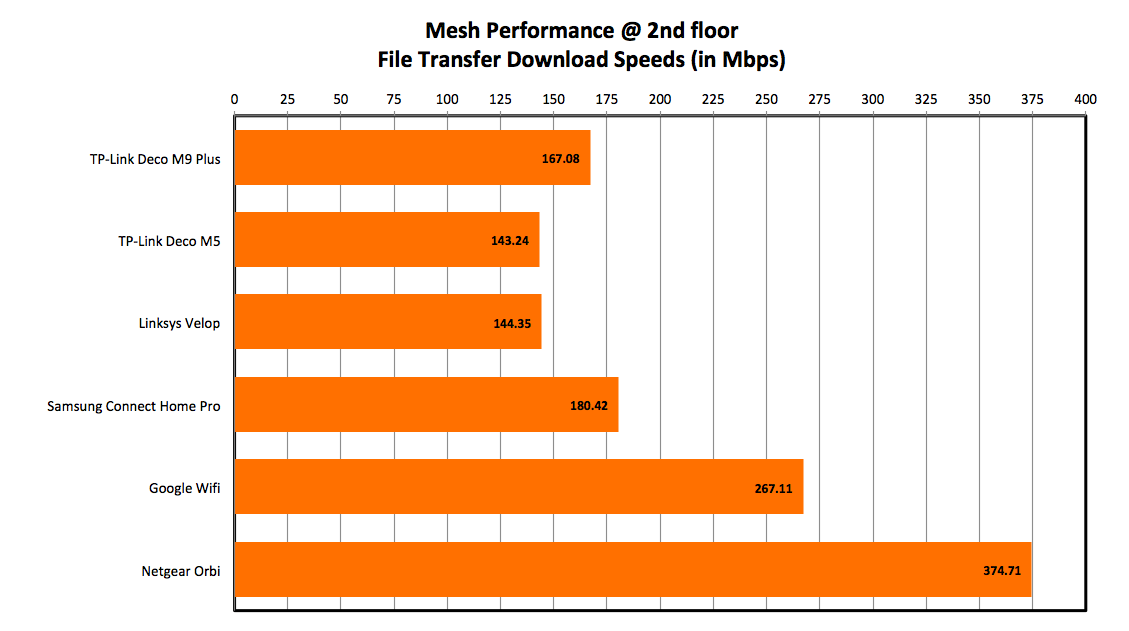 With a node on the second floor to bridge the distance between our client device and the main router, we got mixed performance. Its upload speed was one of the highest, behind only the Linksys Velop and Netgear Orbi. Its download speed, however, was a little disappointing as it trailed the Netgear Orbi, Google Wifi, and Samsung Connect Home Pro. 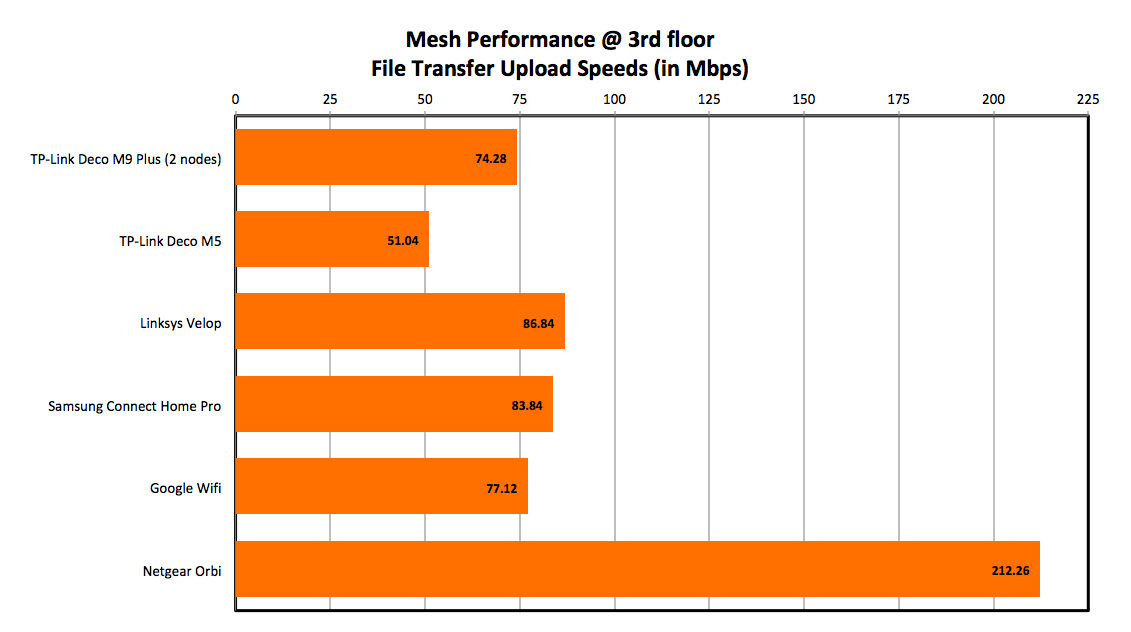 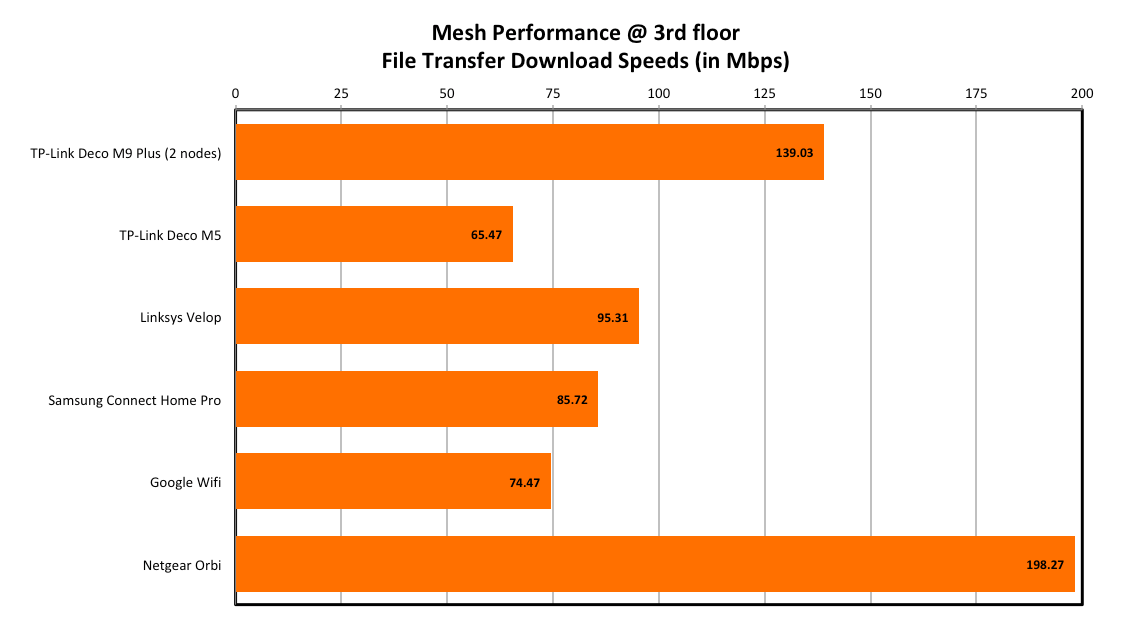 How does it compare to its rivals? 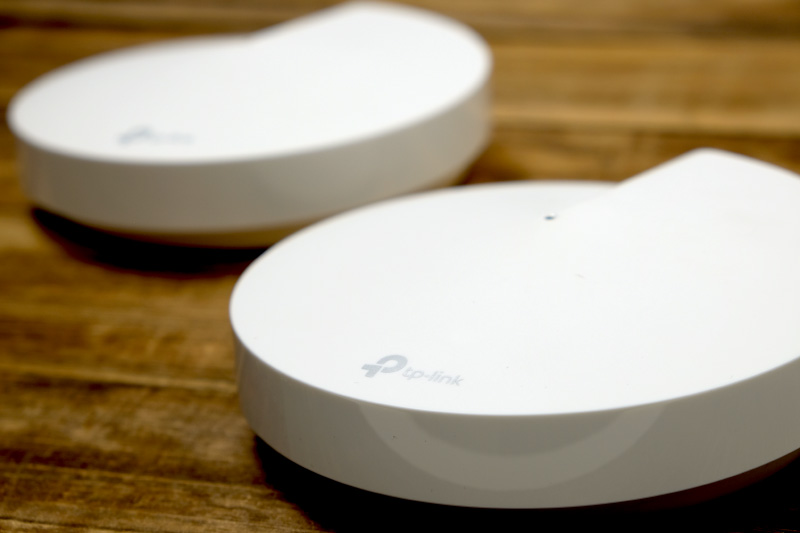 Performance was mostly a mixed bag. Range is above average but its upload speeds were generally quite a lot poorer than its download speeds. Overall, the Deco M9 Plus was significantly quicker than other dual-band mesh networking systems and it was a good match for the Linksys Velop. If performance is a priority, the Netgear Orbi is still the outright performance king.

Performance may not be its strong suit but the Deco M9 Plus’ smart home capabilities give it a leg up against competing tri-band mesh networking systems in the market. The Velop and Orbi cannot act as smart home hubs. So if you are thinking of adding smart devices to your home, the Deco M9 Plus can streamline that process. The only other mesh networking system with smart home capabilities is the Samsung Connect Home Pro, but that’s a dual-band system and it is really pricey.

Speaking of price, that is perhaps the Deco M9 Plus’ strongest suit. At S$568 for three nodes ($369 for a pack of two, S$199 for a single node), it is significantly more affordable than its rivals. The Samsung Connect Home Pro, which is also a mesh networking system with smart home capabilities costs a whopping S$326 or 57% more! In light of its price, performance, and features, the Deco M9 Plus arguably offers the best value.

To sum up, the TP-Link Deco M9 Plus is a competent mesh networking system that offers a lot of value. Performance was a little erratic and upload speeds were generally poor, but it makes up for that with above-average range and competitive download speeds. On the design front, it has a clean aesthetic that should look good in most homes. Finally, it is one of the most attractively priced mesh networking systems in the market.