The Excite Write is equipped with an 8-megapixel rear autofocus camera with F2.2 aperture and LED flash. It also has a 1.2-megapixel front-facing camera. 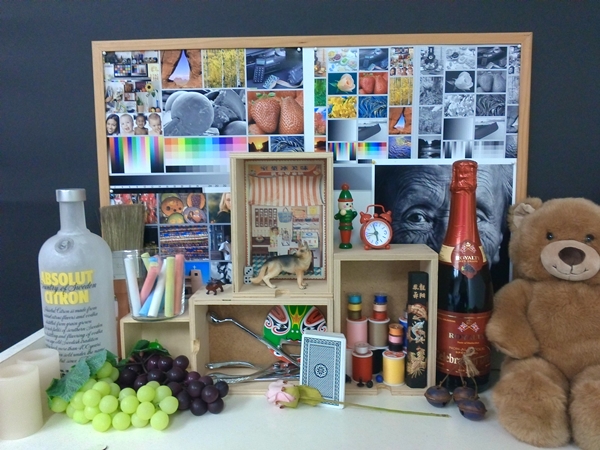 The Excite Write is powered by NVIDIA Tegra 4 quad-core 1.8GHz processor and 2GB RAM. Touted as "the world's fast mobile processor", we had two previews of its capabilities at CES 2013 (web browsing and computational photography) and MWC 2013 (benchmarks and low power consumption).

As the first Tegra 4 device to land in our labs, we are very interested to see how it fares against the other processors. We will be pitting the Excite Write up against some of the recent 10.1-inch tablets such as the Samsung Nexus 10, Samsung Galaxy Note 10.1, Apple iPad (4th Gen) and the Sony Xperia Tablet Z.

Quadrant evaluates a device's CPU, memory, I/O and 3D graphics performance. The Excite Write tops the Quadrant benchmark chart with a score of 11,441, which is far ahead of the runner up Sony Xperia Tablet Z. The Tegra 4 processor is a massive upgrade over its predecessor (the Tegra 3), where the Tegra 3-powered Toshiba Regza Tablet AT300 only managed an underwhelming score of 3,612 in the Quadrant benchmark.

However, we still find its score a tad disappointing. During our preview session at MWC 2013, the Tegra 4 processor was capable of hitting higher scores than what it did here. Its main competitor, Qualcomm saw the Snapdragon 600 and 800 chips faring better. One possible reason could be the fact that the Tegra 4 in the Excite Write has to power much more pixels. For now, we don't have an apples-to-apples comparison to rule the display factor as the main reason, but it could be a contributing factor.

Smartbench 2012 is a multi-core friendly benchmark application that includes both the Productivity and Gaming indices. Surprisingly, while the Excite Write led the competition on the Productivity test, it was on par with the rest when it came to the Gaming suite. Despite having the newest processor of the lot, the Excite Write had similar score as the 9-month old Nexus 10 and Apple iPad (4th Gen). Nonetheless, its performance in the SunSpider Javascript benchmark ranked among the top.

Number crunching aside, the actual user experience seems to differ drastically from the benchmark results (not surprisingly since benchmarks ain't everything). The UI navigation was consistently met with hiccups and lags, something that should not have been experienced when we are talking about Android 4.2 Jelly Bean OS combined with the NVIDIA Tegra 4 processor. There were also noticeable instances where apps (system apps or third-party apps) took longer than usual to load. To top all of that, web browsing wasn't as fluid and smooth as we expected - something that our Sunspider Javascript test was unable to capture.

• Looping a 720p video with screen brightness and volume at 100%

Compared to its rivals, the Excite Write did a fairly good job in terms of battery life. It lasted 6 hours and 27 minutes, which is close to an hour longer than the Nexus 10 and on-par with the Apple iPad (4th Gen).

It is important to note that the Excite Write may have the smallest battery capacity of 4380mAh, but it also has a higher voltage compared to the rest. A higher voltage generally means more power and better performance. Therefore, it is not surprising to see the Excite Write having a lower power consumption compared to the Samsung Nexus 10, Sony Xperia Tablet Z and Apple iPad.

In the Portability Index where each device is assessed on its ability to balance battery mileage against its size and mass, the ranking of the Excite Write is mainly weighed down (no pun intended) by its weight (630g) which is the heaviest among the 10.1-inch tablets. It also has the thickest chassis at 10.5mm.

In our daily usage experience with the Excite Write, the bulk of the device was notable; especially if used over sustained periods of time. Our recent review of the Sony Xperia Tablet Z made matters worse as we've come to expect thinner and lighter products which made it very easy to handle a huge 10.1-inch tablet in one hand. While we've noted the Sony's poor battery life as a result of its wafer thin build, it's good to know that the Toshiba Excite Write is better than the gold standard of the Apple iPad (4th Gen.) in terms of power efficiency and the battery life. However, Toshiba's tablet was a letdown in overall portability with one of the worst volumes of any large tablet.

On a side note, we also noticed that the Excite Write can get pretty warm on its rear when we pushed the processor to its limits. The area near the rear camera felt too warm for our comfort after intensive gaming and web browsing. 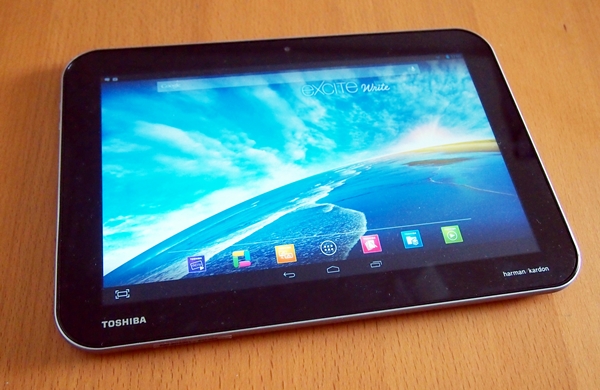 Do the high resolution display, TruPen and Tegra 4 processor excite us? To be frank, our initial excitement over these features died down halfway through our review of the tablet.

While there is no doubt that the "beyond Retina display" is beautiful, it is not the first and the best we've seen. Its TruPen implementation is smooth, but not as advanced as Samsung's S Pen. Its accompanying TruPen-optimized apps are good for basic note taking, but pale in comparison to Samsung's feature-rich S Note and S Memo apps.

Perhaps the biggest disappointment is with user experience. On paper, the NVIDIA Tegra 4 should be on-par with the latest and the greatest from Qualcomm. In reality, it is quite the opposite with sluggish performance and disappointing benchmark scores. Fortunately, power efficiency of the tablet is good and it's one of the longer lasting 10-inch tablets in the market.

In a couple of other aspects, Toshiba appears to be slipping behind the competition. Its design is getting dated in the face of sleeker and more beautifully designed offerings (yes, we are referring to the Sony Xperia Tablet Z as the new benchmark for style). It's also chunky in actual form and it's one of the heavier tablets around. Despite these downsides, it does have other forward looking features like Wireless 802.11ac network support and microSD storage expansion up to 128GB, thus bringing total tablet storage capacity at up to a whopping 160GB! While it's an expensive proposition to max out the tablet's storage potential, the option is available for the storage junkies who would like to stuff a boatload of movie and music content.

If you are looking for a more established tablet to fulfill more productivity needs, you can consider the $998 Samsung Galaxy Note 10.1 (16GB, LTE). You get faster data connectivity on the move, a more robust stylus experience and a basket full of TouchWiz features to meet your entertainment needs. Moreover, Samsung has shown its commitment to regularly issue software updates for its mobile devices which will future-proof your purchase. However, you've to put up with a sub-par display resolution of just 1280 x 800 pixels as compared to the Toshiba Excite Write that deliver four times the number of pixels for the same screen size.

The $668 Nexus 10 (32GB, Wi-Fi) is a compelling price-sensitive alternative for those who do not need the stylus input, prefer a stock Android user experience and want the same high resolution display. You are also guaranteed to be the first to be updated to the latest Android version. Its only drawbacks are the lack of cellular connectivity and the absence of a memory card slot for expansion.

Comparatively, the Toshiba Excite Write avails itself in two 32GB models: Wi-Fi only and Wi-Fi with cellular (3G) that are priced at S$799 and S$899 respectively. Given the feature list of the tablet, its asking price might seem like a bargain. However, the tablet's aesthetics could use a cutting edge update, while actual usage is a bit patchy and not exactly expected with a brand new processing platform like the NVIDIA Tegra 4 underneath the hood. As such, we would be hard pressed to recommend Toshiba Excite Write unless you absolutely need huge storage capacity and a high resolution screen with stylus input functions.