The Pathless is an interesting take on the open-world, monster-slaying game

The Pathless is an interesting take on the open-world, monster-slaying game 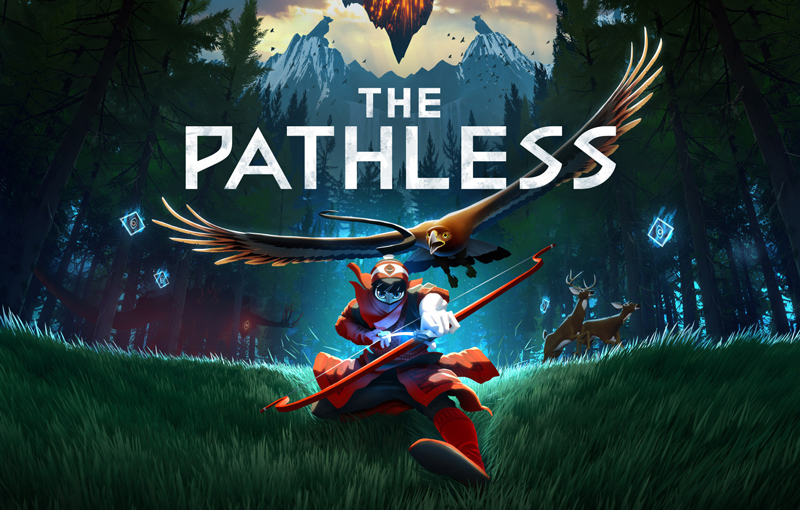 Archery and eagles - the perfect combo.

The Pathless comes from developer Giant Squid, creatives of Abzu. Giant Squid is also made up of ex-staff from Thatgamecompany, who made Journey. I'm only mentioning this because the moment you boot up the game and see those dreamy visuals, and start dashing through the open-world with ballerina-like fluidity - those connections are going to make a lot of sense. Thematically, The Pathless feels very similar to Journey and Abzu too, only with a much clearer story to follow.

That doesn’t mean that it’s anywhere as good as those two games, but it’s still a really refreshing take on the open-world genre.

Stop the darkness, or whatever 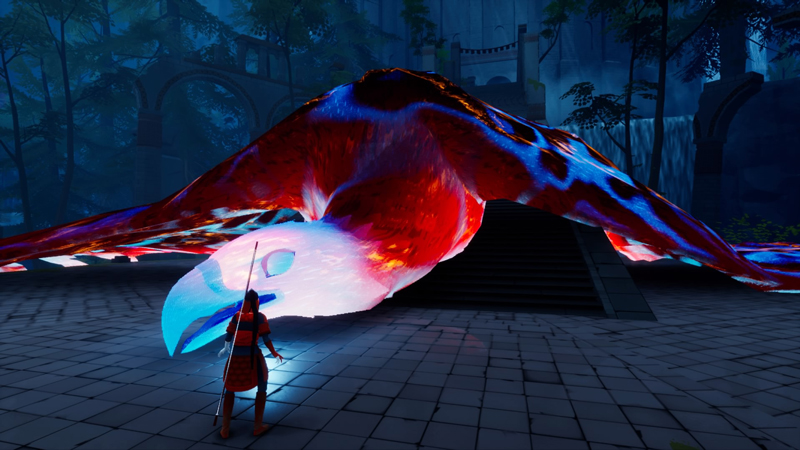 The Pathless’ lore is spoon-fed to you the moment you boot up the game, via several passages of text describing the world you’re about to enter. It’s all very generic fantasy fare to be honest, and I forgot most of it the moment I started traipsing about the open-world. Basically, a being called the Godslayer has begun to corrupt the land, killing its people and spreading fire across what was once a peaceful, beautiful place.

You play as a hunter armed with a bow and arrow, charging in with the intention of reversing everything the Godslayer has done - something you’ll learn that no one else there has managed to pull off, via notes on their bodies scattered around the map. The story here is, at best, boring. You’re Link in The Legend of Zelda: Breath of the Wild. All you need to know is that there’s a whole bunch of darkness in this world, and your duty is to cleanse it.

It’s not a particularly compelling premise, but it gets the job done. The land you get to explore in The Pathless is vast, and made up of several ‘plateaus’. Your job is to light several beacons around a plateau, making a wandering boss vulnerable before going to fight it. Once you defeat it, you unlock another plateau, and the game continues on that loop until it ends. It’s a rather short experience all in all, but it would be nothing without the game’s unique traversal mechanic.

The Pathless is a rather interesting open-world game. In games like Ghost of Tsushima and Assassin’s Creed Valhalla, you’d have lots of side quests and stories to explore. The Pathless’ huge environments are rather empty by comparison, populated instead with lots of little puzzles for players to solve. It feels more like a platformer à la Super Mario Odyssey than anything else, but that works in its advantage.

When you drop into your first plateau, you might notice something rather strange. Why are there little icons scattered everywhere on the map? Once the game teaches you to dash, you'll notice a bar at the bottom of your screen that starts running out. When you shoot one of those little icons, that bar fills back up again. It’ll take some time for it to click, but eventually you’ll realise that the quickest way to get around this map is to dash, shoot, dash, shoot and dash again. If you manage to keep up that momentum, you could dash forever, shoot up into the air and do even more neat tricks - so long as you don’t miss a shot.

This isn't Horizon Zero Dawn, though. The Pathless automatically highlights the icon closest to you as you travel, and all of you have to do is hold down R2 for a few seconds to fill up a bar and hit it. If you let go too early, you’ll miss your shot. If you’re dashing and let go too late, you’ll lose momentum. Hence, shooting with a bow and arrow in this game is more of a matter of timing than aiming - which might feel extremely strange and arcadey at first, but becomes satisfyingly addictive as you learn to master it.

This method of traversal might seem complicated when put into words, but in practice, it’s extremely intuitive. Once you start shooting those icons, you’ll be flying through the map at high speed in no time. The Pathless rarely ever tells you what to do - but it’s remarkably good at guiding you along the right path with some subtlety.

The beacon is lit! To progress in The Pathless, you’ll need to solve puzzles around the map - each of which give you a little totem that you need to light a beacon. These puzzles tie into the game’s heavy emphasis on exploration and finding things for yourself, as they’re not clearly marked on the map most of the time. While dashing around, you might notice a landmark or a hidden cave, or perhaps a ruined building - and it’s always worth poking your head into these things to see if there’s a totem to collect.

To help you in finding these totems, The Pathless introduces you to an adorable eagle - a little animal your hunter saves and bonds with at the start of your journey. This little eagle helps out by allowing you to glide, or fly into the air by flapping its wings once. As you progress through the game, you’ll unlock additional wing flaps, allowing you to soar even higher into the sky than before. That becomes important later in the game, when a larger emphasis on open-world verticality means that most of the totem puzzles sit on top of buildings and mountains.

As you explore each plateau, you’ll notice a massive, raging red ball of fire and darkness in a corner of the map. This is a storm, with a wandering corrupted guardian sent to stop you at the center of it. At random points during gameplay, the storm will rush towards you, and a stealth sequence will begin where you have to hide from the guardian and reunite with your eagle. It’s a fun little mechanic that introduces tension to your open-world adventures, keeping you on your toes while you search for totems. 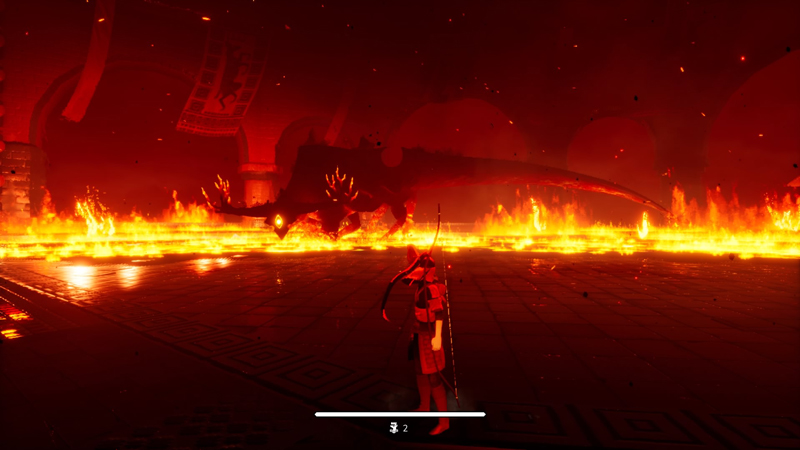 Once all the beacons are lit, the corrupted guardian inside the storm becomes vulnerable. At that point, entering the storm kicks off a boss fight - and unfortunately, they mostly play out the same way. First, you’ll chase down the boss and shoot at its eyes, taking a page out of Resident Evil’s book. Then, it’ll corner you in a building, and you’ll have to… shoot at its eyes again. There's a lot of eye-shooting going on here. While each boss introduces a new mechanic to these fights, they all go the exact same way otherwise. It gets boring quickly.

It’s emblematic of a larger problem in The Pathless. When you start your adventure, everything feels so incredibly new and fun to discover. That wears thin once you realise how little content the game actually has to offer. Interesting puzzles can break up that pace, but it’s not enough. By the halfway point, I was tired of fighting the same bosses. I was tired of getting stuck in a storm. I was tired of this boring, meaningless story. The only thing keeping everything afloat was the traversal, which would be so much more fun in a better game. 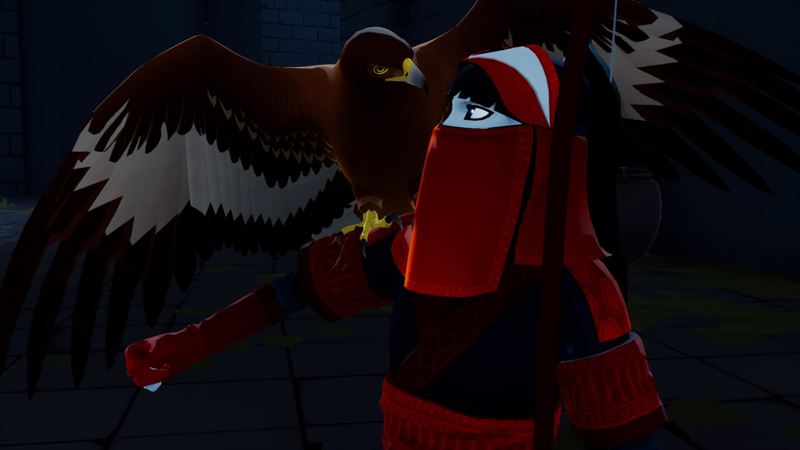 Besides the wonderful fluidity of its movement system, The Pathless’ best quality is that it doesn’t overstay its welcome. This is a tight six to seven hour experience, though you could pour many more hours into the game by going back into each plateau and mopping up undiscovered puzzles. These puzzles vary in difficulty - but they usually involve deflecting arrows off of mirrors, or shooting arrows through torches to light other torches. Rarely will one be inventive enough to fully capture your interest, but they do provide a refreshing way to progress in an open-world game.

The issue is that often, The Pathless really does feel like it’s stalling for time. I feel like I could reach out and pull two plateaus out of this game, and there would be little effect on its story. You spend so much time doing the same things over and over again in the middle of this game, before it finally throws something new at you in the last half hour. That's when it suddenly becomes fun again - but why did it take so long to get there?

Write a Review
Compare This | Specifications
Lovely visuals
Really fun, unique traversal
Puzzles are fun to find
Eagle is 10/10
The story is boring and generic
The boss fights are repetitive and easy
Our articles may contain affiliate links. If you buy through these links, we may earn a small commission.
Sponsored Links