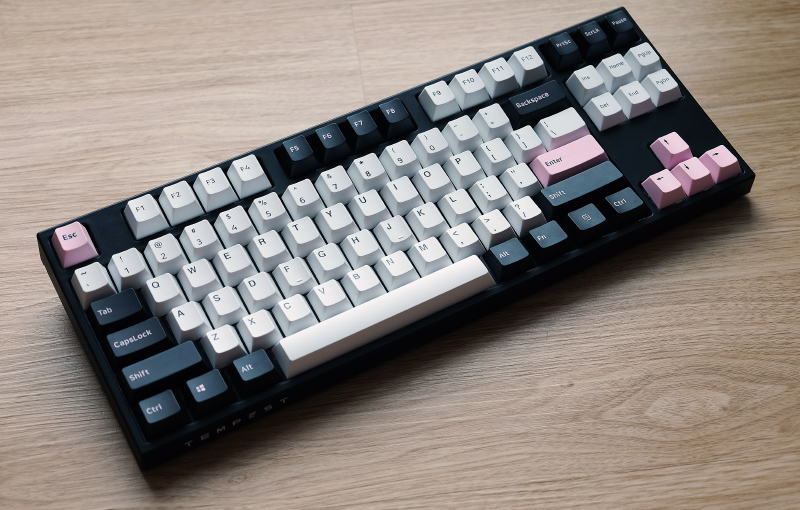 Quick recap, Tempest is a Singapore keyboard company founded by three local keyboard enthusiasts. Their goal is to offer affordable keyboards with features usually found on pricier models. Their first keyboard was the Kirin – a wireless mechanical keyboard that we found to be very decent.

And now, Tempest is back with a new and improved version of the Kirin. It’s called the Kirin v2 and it has a couple of new features that I think keyboard enthusiasts will appreciate. 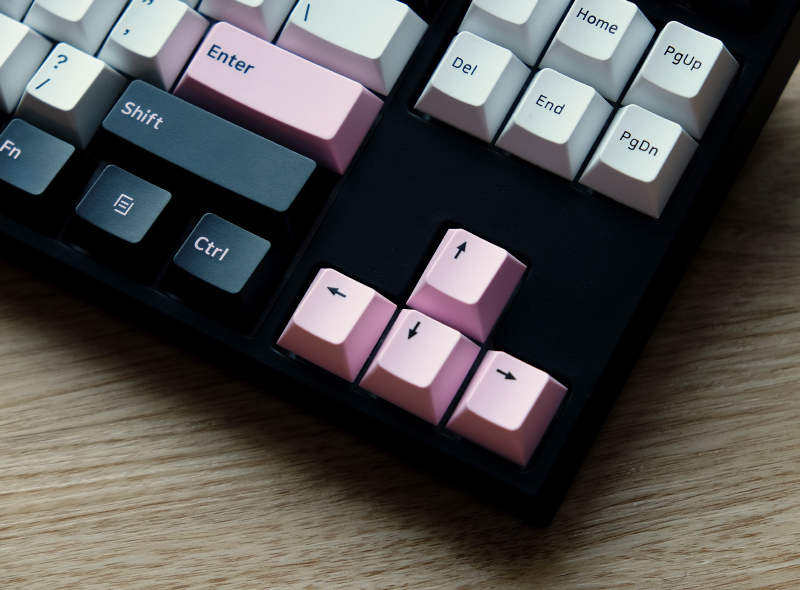 Like the original Kirin, the Kirin v2 is a TKL keyboard. It comes in only one colour, which is a black chassis with keycaps that are a mixture of white, black, and pink. It’s a striking colour scheme and I like it.

The black chassis is plastic. It has a matte finish and feels sturdy so it neither looks nor feels cheap. An aluminium alloy backplate adds further rigidity to the board and is a good base on which to type on. The chassis on its own has a slightly angled profile so the top rows sit higher than the bottom rows to improve comfort. But if you are like me and prefer a higher angle still, there are retractable feet under the keyboard which props the board up even more. Speaking of which, you’ll also find a USB-C port under the keyboard. It’s used for charging or you can plug it in and use it in wired mode. There are routing channels with left, right, and centre exits. 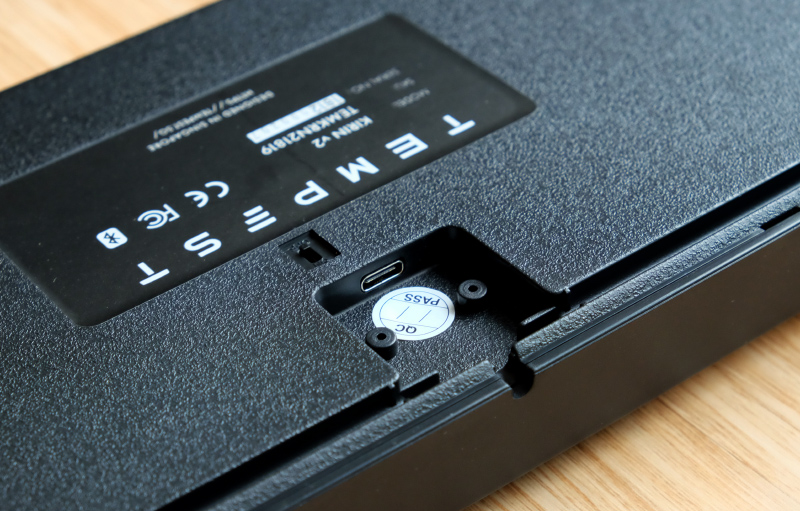 The pink keycaps add a nice pop of colour. But if pink isn’t your thing and you prefer something more subdued, Tempest provides additional black Esc and enter keys for you to swap out. The keycaps are doubleshot PBT, which gives them a textured surface and also means they are more resistant to wear so you won’t get that nasty shine that inevitably shows up on ABS keycaps after prolonged use. 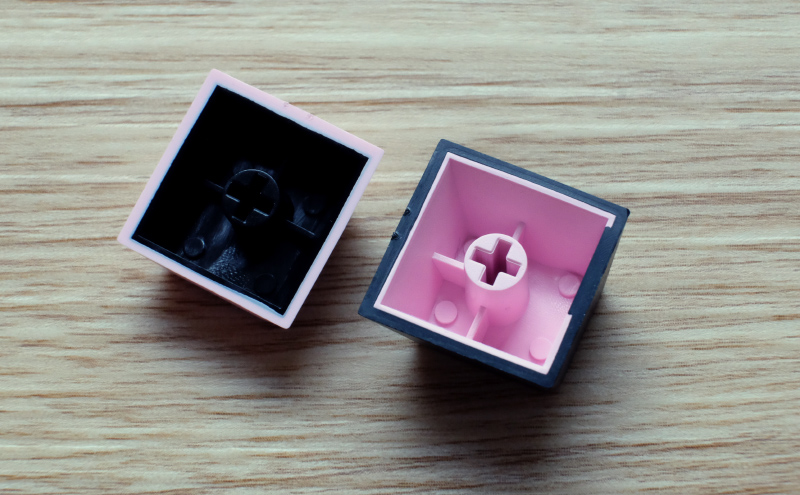 The keycaps are of a higher quality. The first Kirin had PBT keycaps too but their legends were printed using a dye sublimation process and the keycaps themselves were prone to backlight bleed, not so on the Kirin v2. Even the white keycaps are solid and did not let any light through. The quality of the legends are improved too but I could still spot some inconsistencies here and there. The “N” legend, for example, is a little thin and ragged. 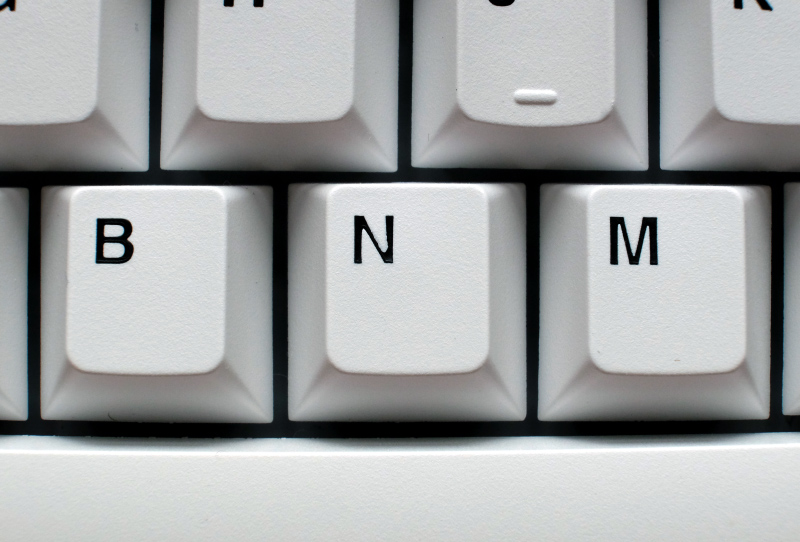 RGB lighting makes an appearance on the Kirin v2. Now, I know not everyone is a fan of RGB lighting but the way I see it is this: a keyboard with RGB lighting lets you choose the colour of light you want. I’m not sure if naysayers are aware but you don’t have to use all colours. If you don’t want your keyboard to be looking like all colours of the rainbow, simply pick your favourite colour. That’s the advantage of RGB.

The problem, however, is that because there’s no software that comes with the Kirin v2, all of the customisation has to be done on the keyboard. And this limits your customisation options. There’s 19 presets to choose from and it includes your usual suspects like flashing, ripple, sine wave, and so on. And within each preset, you can further cycle through 8 colours. So while it may be an RGB keyboard, you can’t go wild and create custom or game-specific colour templates.

Also, the lights aren’t super bright but I think has more to do with the fact that the keycaps are fairly thick and don’t let much light through. If you really want the lights on this board to pop, you could swap the keycaps for one of those shine-through or pudding-type keycaps. The board supports any MX-style keycaps. 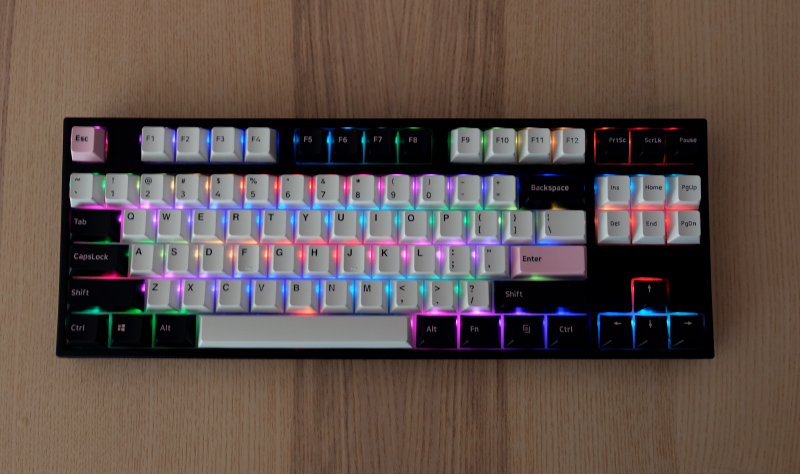 Like the old Kirin, the Kirin v2 can be used wirelessly. Bluetooth support has been upped from Bluetooth 3.0 to Bluetooth 5.1, which supposedly helps with power consumption if you are using the board with a device that also supports Bluetooth 5.1. You can pair it with up to three devices simultaneously and switch between them. It’s mighty useful and I use it to swap between my MacBook Pro and iPad.

Battery capacity has been increased by around 45% – from 1,850mAh to 2,700mAh. Battery life is going to depend heavily on how long you use it and the lighting effects that you choose. Tempest claims 17 to 108 hours of use depending on lighting usage. With the lighting effects set to sine wave and brightness to the max, I got about a week’s worth out of the batteries. Bear in mind that I’m a writer so I spend about 8 to 10 hours a day on the keyboard. That’s isn’t too bad, at all. If I use a less power-draining effect like ripple and turn the brightness down, I could extend the battery life to around two and a half weeks.

Also, note that the Kirin v2 has a rather aggressive power-saving feature and it goes into standby mode if it detects no usage in five minutes. Sadly, like the first-generation Kirin, the Kirin v2 doesn’t have a battery level indicator. However, the FN key does turn red when battery level has dipped to 10%. But if you are using RGB lighting effects, it can be easy to miss this warning. Luckily, you can use the board in wired mode and charge at the same time. 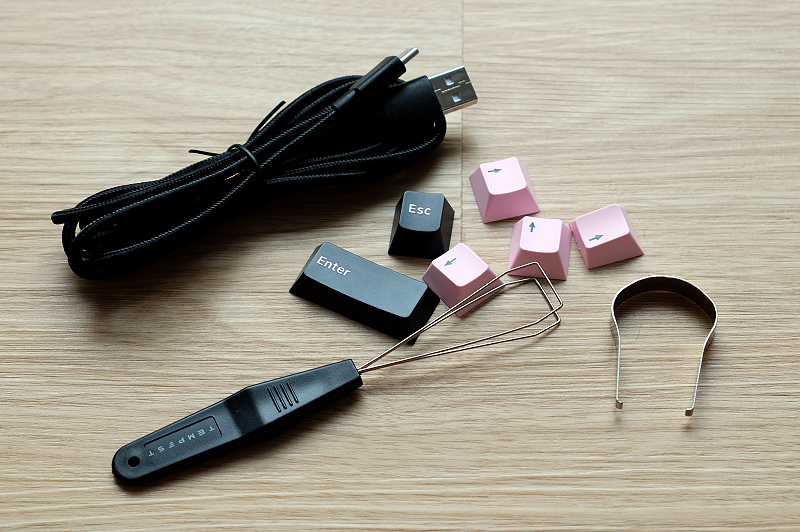 Mac users will be happy to know that there’s a dedicated Mac mode so you can change the keyboard to a Mac layout. In this mode, you can use the Alt key as a Command key and Windows key as the option key. Also, the function keys also work as Mac shortcuts, giving you quick access to Mission Control, Launchpad, and media playback options.

As for accessories, apart from the additional keycaps that I mentioned above, the Kirin v2 comes with a braided USB-C cable, a keycap puller, a switch puller, a keyboard dust cover, and a sturdy EVA hard carrying case. 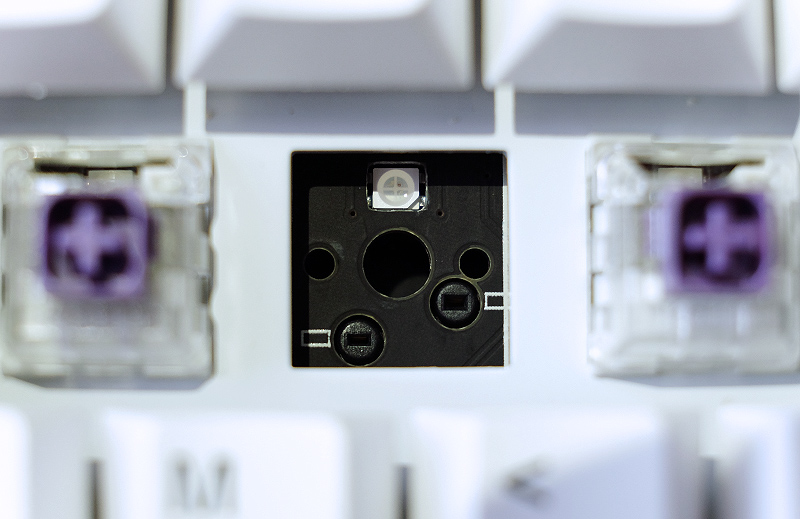 Tempest offers three switches to choose from and they are not your run-of-the-mill Cherry Reds or Blues. Instead, they are Gateron Yellow (linear, 50g), Kailh Box White (clicky, 50g), and NovelKeys Box Royal (tactile, 75g).

The other change is the stabiliser used. The first-generation Kirin had OEM stabilisers which my colleague noted to be mushy in feel. The Kirin v2 uses Cherry stabilisers, and not only that, they have been clipped and lubricated. The end result is a much improved key feel that’s more incisive. It also sounds better – more thonk, less clack. 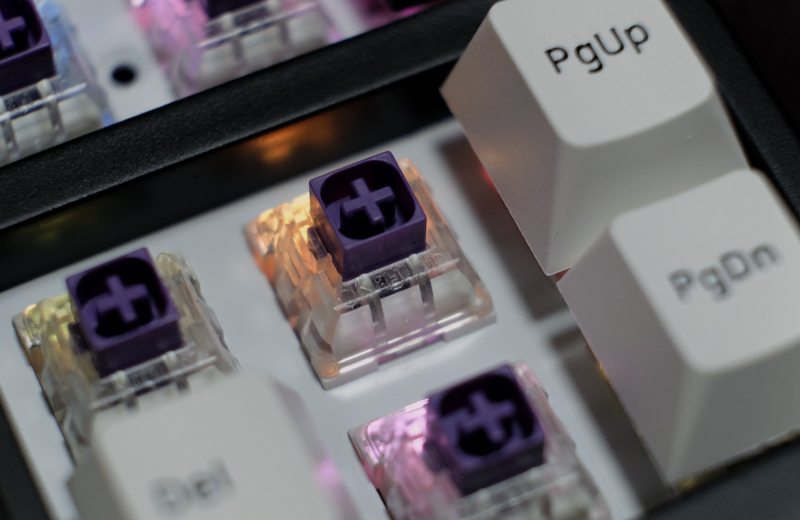 The Kirin V2 I tested came with NovelKeys Box Royal switches, which were designed by switch-maker Kaihua for NovelKeys as a more tactile alternative to the existing lineup of tactile Box switches. Don’t be fooled by the 40g actuation force that is quoted in most Box Royal spec sheets, the bottom-out force is around 70g so it is a considerably heavier and more tactile switch that your regular Browns. As a fan of heavy switches, I find them very pleasant to use. However, if you are more accustomed to lighter tactile switches, you’ll need some time to adjust. They feel a little scratchy at first but that feeling went away after a few days of use. 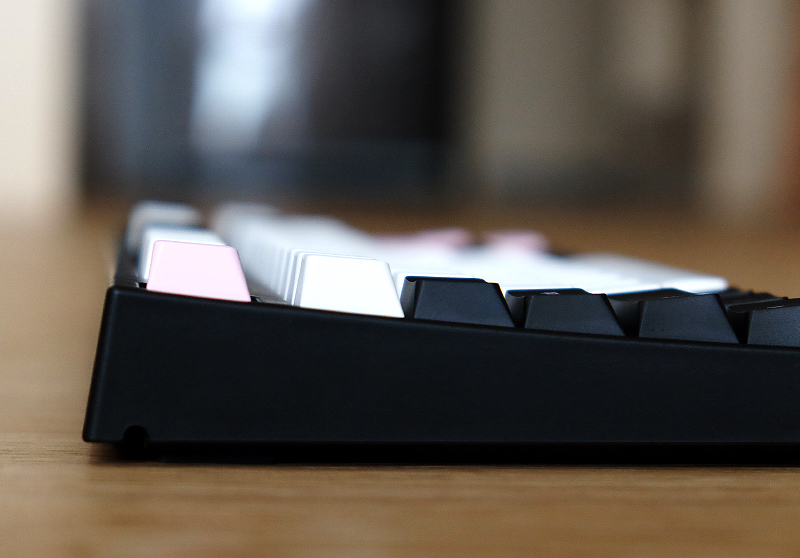 I like typing on the Kirin v2. Key feel is great and there’s no annoying wobble even on larger keys like enter and the space bar. I also like that the board is angled by default and you can prop it to create an even steeper typing angle. It sounds good too with the Box Royal switches, improved stabilisers, and thick PBT keycaps combining to a create a lower-pitched thonk sound that most people prefer. 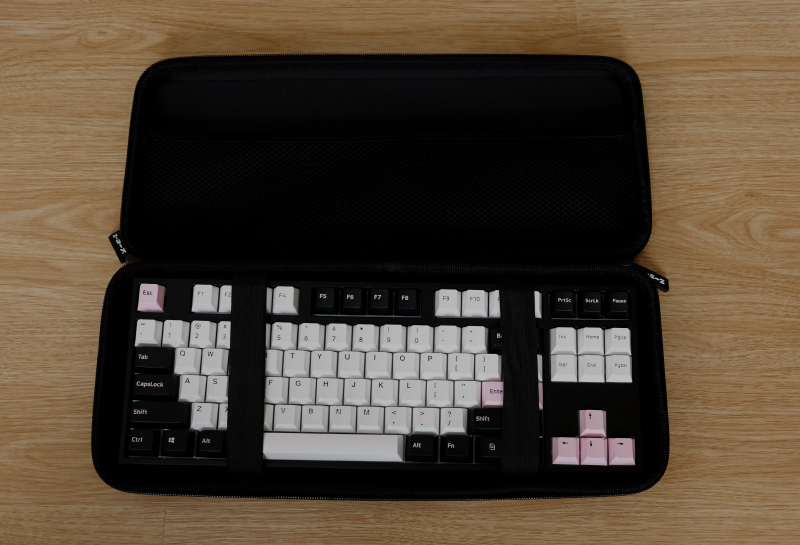 There can be no doubt that the Kirin v2 is a better keyboard than its predecessor. The new doubleshot PBT keycaps and new stabilisers make for a much-improved typing experience, while the ability to swap switches is sure to please veterans and newcomers to the hobby alike. The larger battery and decently long battery life is also much welcomed.

But there’s certainly room for further improvement. Build quality is generally ok but a metal chassis would have been nice. Fans of RGB lighting would no doubt also prefer more robust lighting customisation options, though this would probably mean some sort of software is necessary. And while they are at it, can we have brighter lights too? And finally, a more robust battery level indicator would be a great thing to have too. 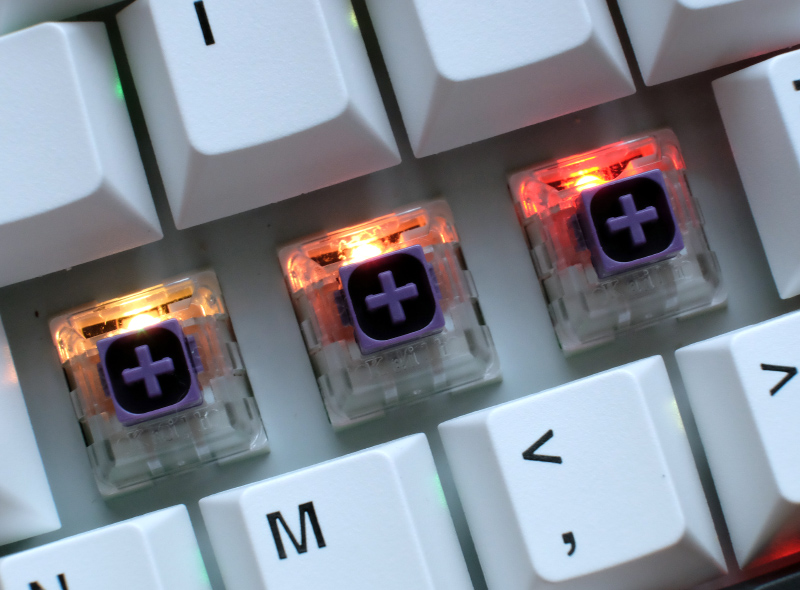 As for price, Tempest is charging a rather hefty premium for all its improvements. While the original Kirin was S$149, this new Kirin v2 starts at S$229. If you want it with the Box Royal switches like I have, it’s S$249.

Now, one of the reasons why the first Kirin was so interesting was because it was an attractively priced Bluetooth keyboard. The original Kirin is unavailable for now but it could still make a return in future. Fingers crossed.

At over S$200, however, there’s no shortage of competitors. Keychron has a wireless mechanical keyboard in the works with a hot-swappable PCB and it looks like it could be a much more affordable option at just US$89 (~S$123) even if looks like the overall build quality is of a lower level given that it has ABS keycaps and its stabilisers doesn’t appear to be lubed or clipped. 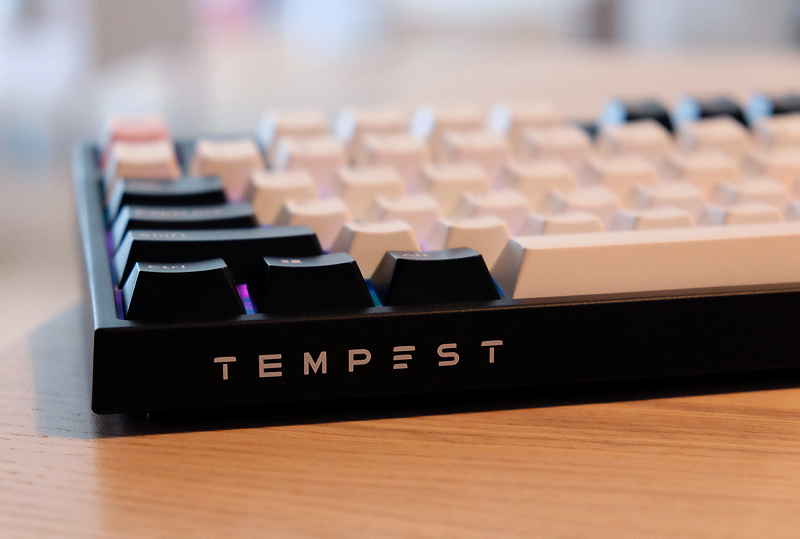 To be fair, the Kirin v2 does justify its higher price tag with enthusiast-level features like hot-swappable key switches, doubleshot PBT keycaps, and clipped and lubed Cherry stabilisers, but it’s still a big jump in price and one that might not be readily appreciated by folks who are just looking for a decent wireless mechanical keyboard.

Still, I think the Kirin v2 is a great option for readers who don’t mind paying a little more for a quality wireless keyboard or those who might just be getting into the keyboard scene. Outside of esoteric enthusiast options, there just aren’t that many options for wireless keyboards with the ability to swap key switches.

Write a Review
Compare This | Specifications
Hot-swappable PCB
Doubleshot PBT keycaps
Clipped and lubed stabilisers
RGB lighting
Decent battery life
Can pair with up to 3 devices simultaneously
Mac mode
Legends on keycaps can be inconsistent
No battery indicator
RGB lighting not the brightest
Lighting not customisable
Pricey
Our articles may contain affiliate links. If you buy through these links, we may earn a small commission.
Sponsored Links