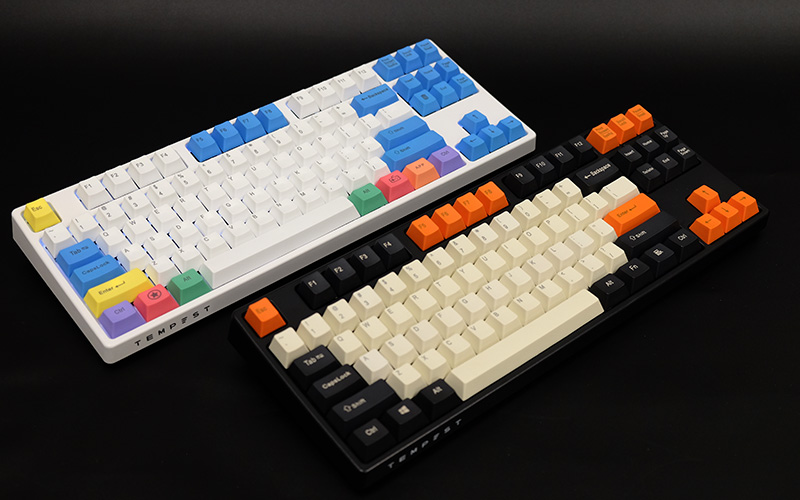 The Tempest Kirin enters the mechanical keyboard market at a time when there's probably more choice than ever. Founded by three local keyboard enthusiasts, the company's goal is to offer an affordable keyboard with features usually reserved for higher-end boards. One of the first things you'll notice about it is its brightly coloured keycaps, which stand out from the sea of stock black caps found on most off-the-shelf keyboards today.

There's a thriving selection of custom keycaps on forums like geekhack, and enthusiasts have proven more than willing to shell out for specific sets that will match the particular board they have. However, these sets are generally extremely pricey – the base kit for GMK Oliva++ is going at S$162, a number that can easily balloon to over S$200 if you pay for extras such as novelty or accent kits. Custom keycaps alone can exceed the price of many keyboards, and GMK Olivia++ is by itself already more costly than the S$149 Kirin. 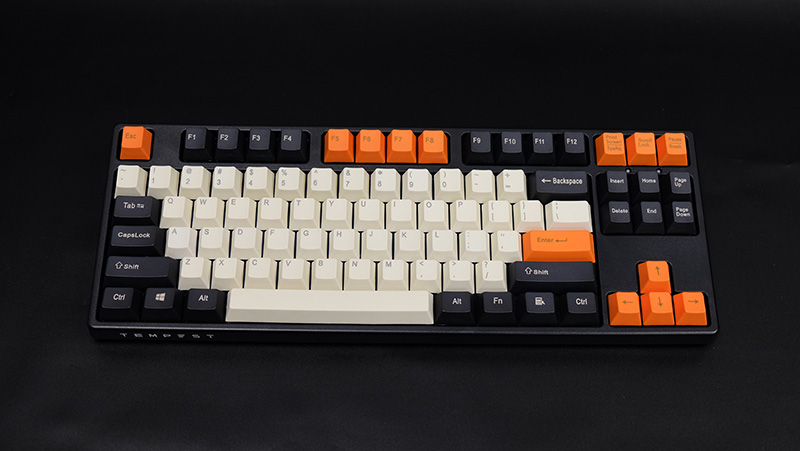 The Kirin is available in two different colours – the black Kirin Monarch and white Crayon. If you follow the custom keyboard community, you'll probably notice that they're unabashedly modelled after T0mb3ry's Carbon set and WinMix's SA Chalk respectively. You can get SA Chalk off KBDfans right now, but Carbon is considerably harder to find and is only available secondhand through online marketplaces like the r/mechmarket subreddit. 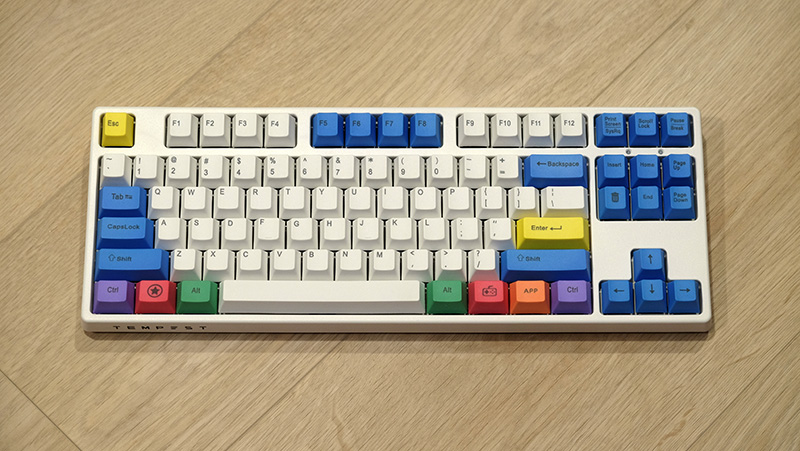 I'd have loved to see Tempest come up with their own keycap designs and colour schemes, but I think mainstream consumers will nevertheless appreciate the extra pop of colour. It's not hard to see what Tempest is trying to do here. By offering stock keycaps that closely resemble expensive custom sets, it's arguably helping you save money.

The keycaps are constructed of PBT plastic instead of ABS, which means they offer a rougher texture and lower-pitched sound that I personally prefer. PBT is also more resistant to shine than ABS, so you shouldn't see them take on that unsightly gloss that many ABS keycaps inevitably suffer from. However, the PBT caps used on the Kirin seem rather thin, and there's a massive amount of backlight bleeding that's especially obvious on the Crayon model. 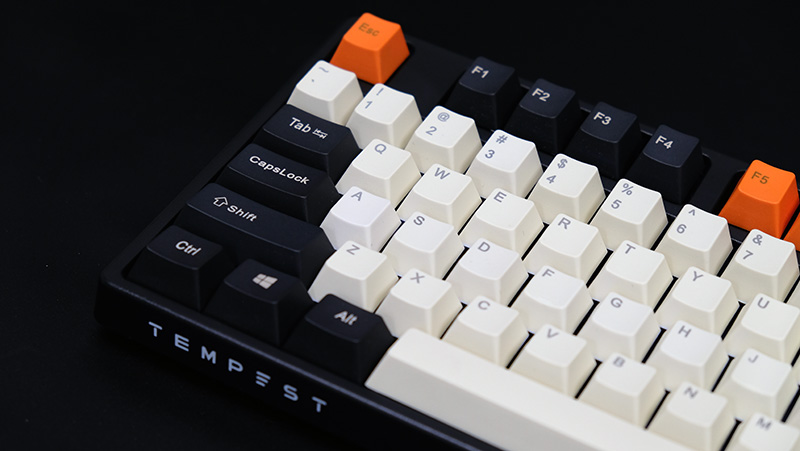 The keyboard offers only white backlighting though, but you can pick from up to seven different presets bound to the number row. This includes animations like Respiration, Ripple, and Sonar, all of which are really smooth and responsive. They look alright in white, but I have no doubt they'd look even better if there was RGB support. 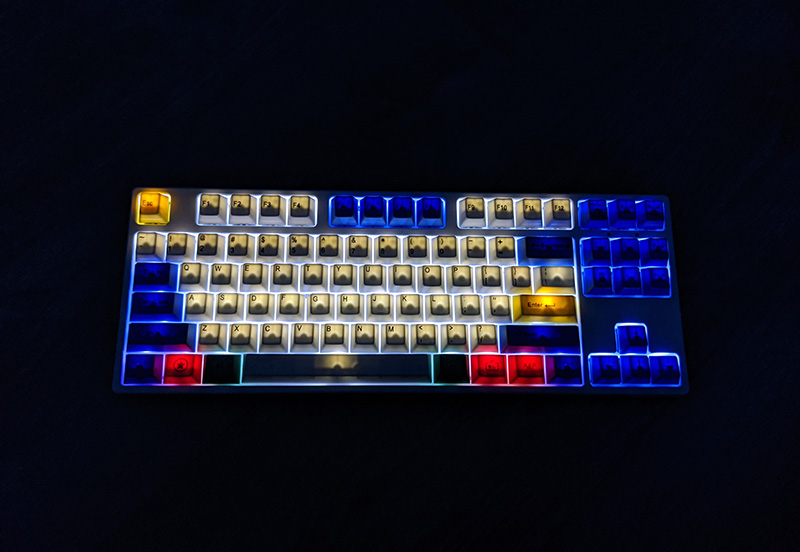 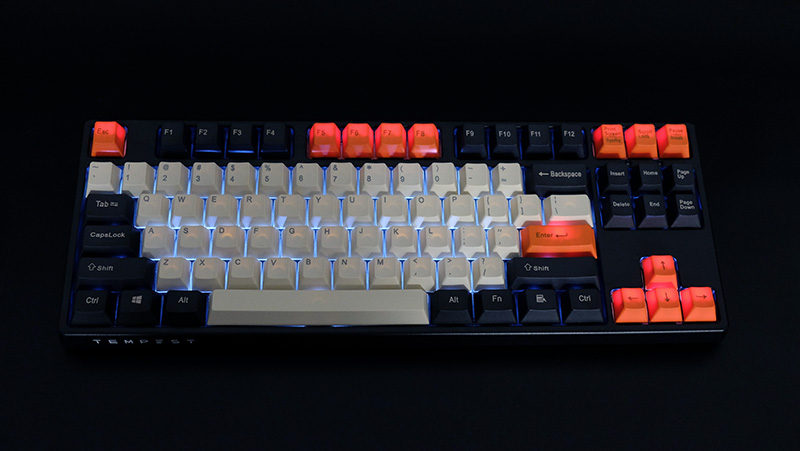 The legends have been printed using a process of dye sublimation. Heat has been used to sink the dye into the plastic, so there's no surface layer that can wear off over time. That's great, but some of the legends are also slightly inconsistent, and you'll notice differences in alignment or legends that are simply not printed straight. I'm nitpicking here though, and these issues probably won't bug you unless you look really closely. 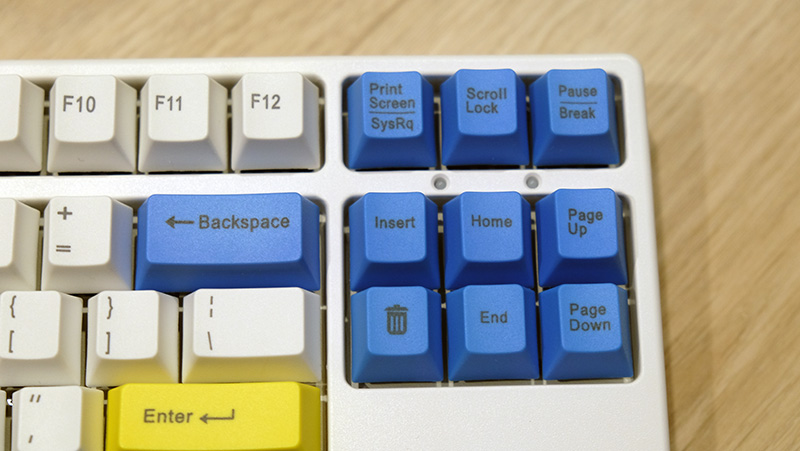 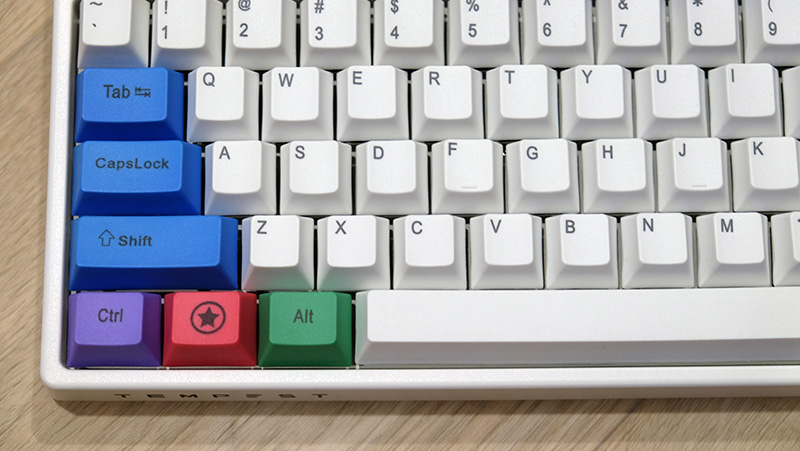 The Kirin's other main selling point is its support for wireless operation. It connects to your PC (or iOS or Android phone) over Bluetooth 3.0, which makes it more portable and versatile than your average tenkeyless keyboard. While there are many mechanical keyboards available today, there are considerably fewer options that can work wirelessly. You mostly hear the same few names being thrown around, like the Anne Pro 2, Filco Majestouch Convertible 2 and iKBC CD87 BT.

The Kirin hopes to plug this gap, and it can remember up to three different devices in its onboard memory. That's pretty useful if you move around a lot and need a keyboard that will work with different systems. The pairing process is pretty straightforward if you follow the user manual:

The keyboard won't always show up as the Tempest Kirin and may instead present itself as a generic keyboard device, but you can just click on it and it should still pair successfully. I ran into some issues getting my PC to detect the Kirin, and it turns out I should definitely have installed the antennas that came with my motherboard. 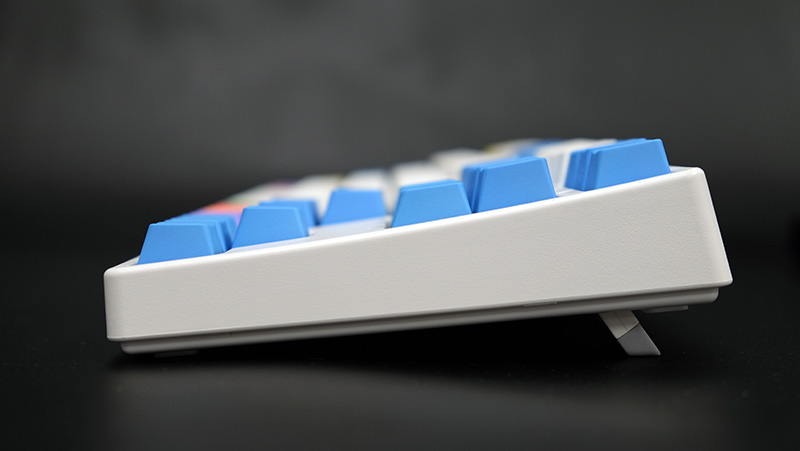 In an office environment with far more crowded frequencies, the Kirin worked pretty reliably for me and I was able to get it to pair with my laptop without any problems. The keyboard was responsive and there were no major issues with lag. However, given that this is still a Bluetooth keyboard, I'd still recommend opting for the wired connection if you intend to game with it.

Tempest says the 1,850mAh battery is good for up to 60 hours of use, but the keyboard is sorely lacking any battery indicator either in the form of hardware or software to let you know when you should think about plugging it back in. Nevertheless, it still seems to be chugging on after a few days of use, but I probably have to charge it soon.

The Kirin ships with a detachable colour-matching USB-C cable, and I really like the use of USB-C in a time when big brands like Logitech are still stubbornly sticking to micro-USB. USB-C is the future, and more keyboards should start making use of it. 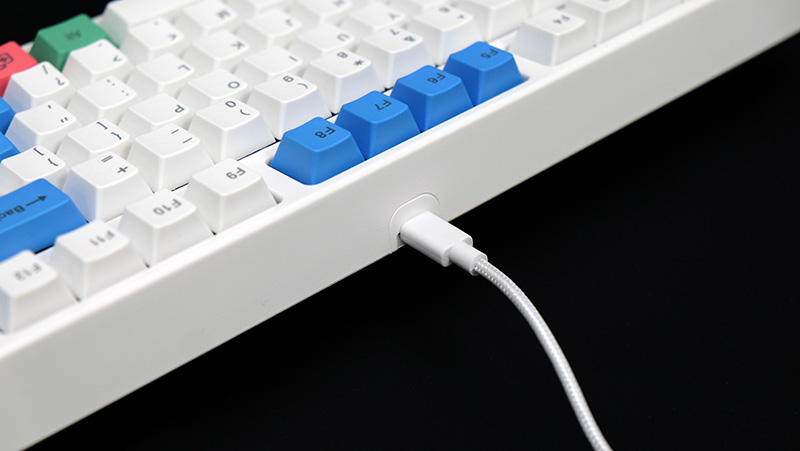 The plastic chassis and steel mounting plate come together to make a reasonably solid board. There's no creaking or flexing when exerting pressure on the case, which is good enough for me at this price.

The switches on the Kirin are the ubiquitous Cherry MX models, and you get to pick between Blue, Red, and Brown switches. I'd suggest going for either the Reds or Browns, since the clicky feedback of Blues is sure to earn you dirty looks from co-workers. Furthermore, Blue switches are less-than ideal for gaming because they have their reset point located above their actuation point, so you can't trigger multiple key presses as quickly.

Elsewhere, Tempest has gone with OEM stabilisers for its larger keys. I've found OEM stabilisers to be mushier than their GMK or Cherry equivalents in other keyboards, and that holds true here. Large keys like Enter and Shift end up feeling quite different from the regular 1U keys, which makes for a less-than consistent typing experience. 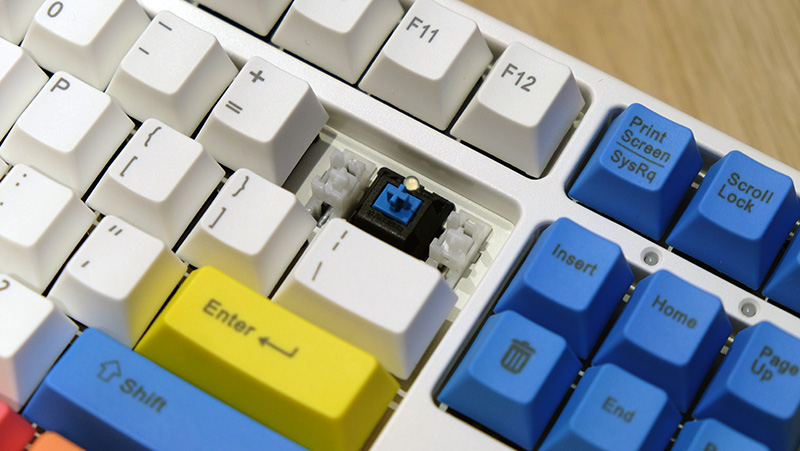 The Kirin doesn't ship with any software that lets you reprogram the keys, but there are a bunch of hardware shortcuts to tweak the layout of the keyboard. For example, Fn+Left Ctrl swaps the left Ctrl and Caps Lock for a HHKB-style layout, while Fn+Left Alt swaps the left Alt and Windows key. Finally, Fn+Win triggers a gaming mode of sorts by disabling the Windows key. 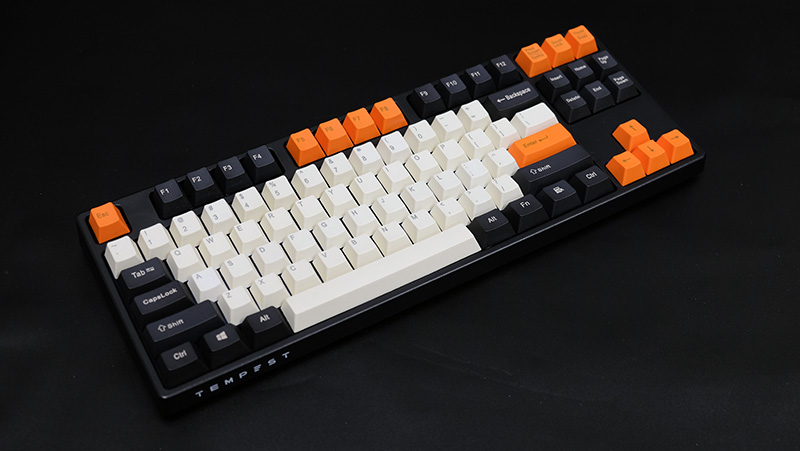 In addition, there's a secondary layer of app shortcuts and media controls bound to the function row. Fn+F1 calls up My Computer, while you can also navigate your playlist and adjust the volume. I'm not a fan of having media controls on the function row though, and I'd much rather have them on the navigation cluster, which is how it is on a keyboard like the Code V3. It's simply easier and more intuitive to reach for the navigation cluster since the keys aren't spread out in a row. 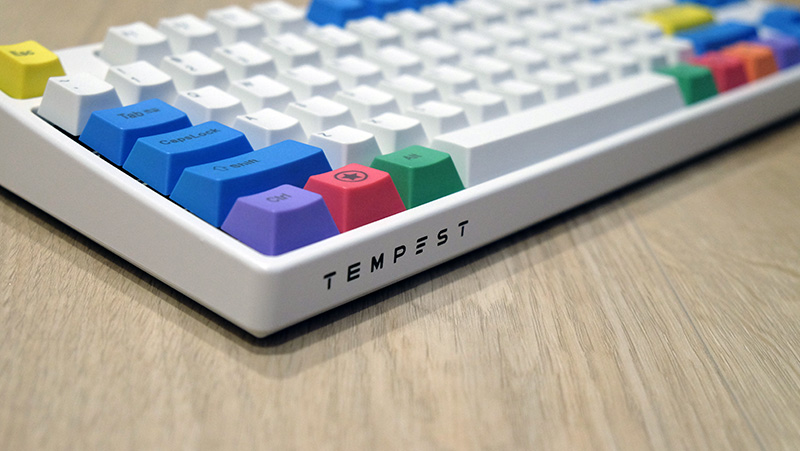 At S$149, the Kirin is a pretty affordable wireless mechanical keyboard. It's a good starting point for someone looking to buy their first mechanical keyboard, or if you just want a wireless board that doesn't break the bank. It's far from perfect, and there are niggling issues like inconsistent legends and mushy stabilisers to name a couple. The keycaps are both the best and worst part of the Kirin. They're PBT plastic and really nice to look at (even if they're not particularly original), but they also let huge amounts of backlight shine through and could really do with better legends.

However, I can't really complain too much given the price. The Kirin isn't targeted at enthusiasts who will work themselves into a tizzy over things like the stabilisers anyway, and it works well as an entry-level wireless mechanical keyboard.

Write a Review
Compare This | Specifications
PBT keycaps instead of ABS
Affordable price for a wireless mechanical keyboard
Cable uses USB-C connector
Attractive keycaps and backlighting effects
Inconsistent legends on keycaps
Keycaps allow backlight to bleed through
Mushy stabilisers
No battery indicator
Our articles may contain affiliate links. If you buy through these links, we may earn a small commission.
Sponsored Links