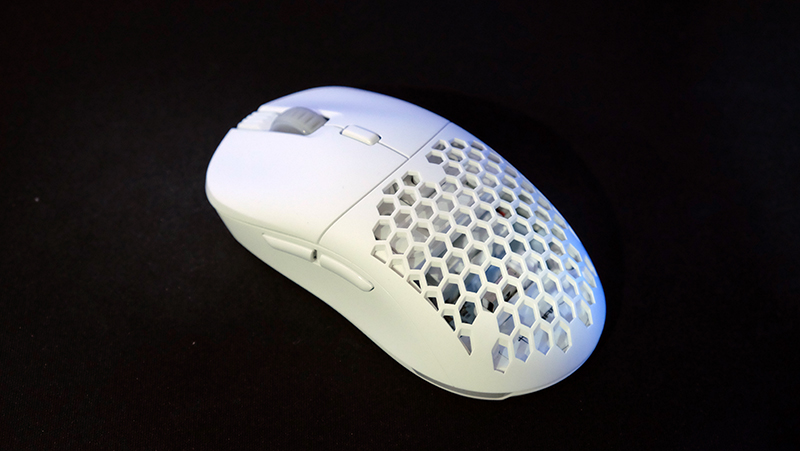 Tecware has made a reputation for itself as a purveyor of tech goods that provide excellent bang for your buck, and its Pulse wireless gaming mouse isn't much different. Much like the SuperSolid Gemini One I reviewed recently, the Pulse packs many of the features you'd expect from a top-tier gaming mouse today, but at a third of the price. It's got a super flexible paracord-style cable, a comfortable and versatile shape, and a honeycomb shell.

And as it turns out, it's similar to the Gemini One in more ways than one. They both share an uncanny resemblance to the Logitech G Pro Wireless, from the unique curvatures of their shape to the modular side buttons. Interestingly enough, both the SuperSolid and Tecware mice also share the same modular shell and internals, which makes me think they came out of the same factory. In the case of the Pulse, the internal compartment houses the 400mAh battery instead of the customisable weight system. There's also a separate niche where you can store the 2.4GHz dongle. 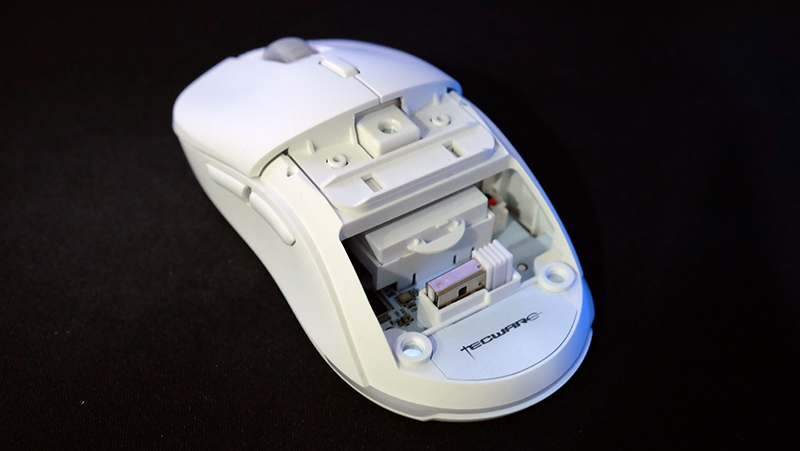 At 91g, the Tecware Pulse isn't the lightest mouse around, and the honeycomb shell only shaves off a few grams. It doesn't really fit into the ultralight category, and the difference in weight with the G Pro X Superlight Wireless is vast. But while it feels markedly more ponderous in hand, you can't really complain at this price.

That said, build quality could be improved. There is some creaking when pushing down on the bottom, and noticeable rattling when shaking the mouse. The Huano switches are nice and crisp, however, with a pleasant amount of resistance. There is some post-travel, but nothing that would interfere with your gaming experience. The scroll wheel offers well-defined notches, and is reasonably quiet. The mouse feet offer a smooth glide right out of the box as well, with no scratchiness. 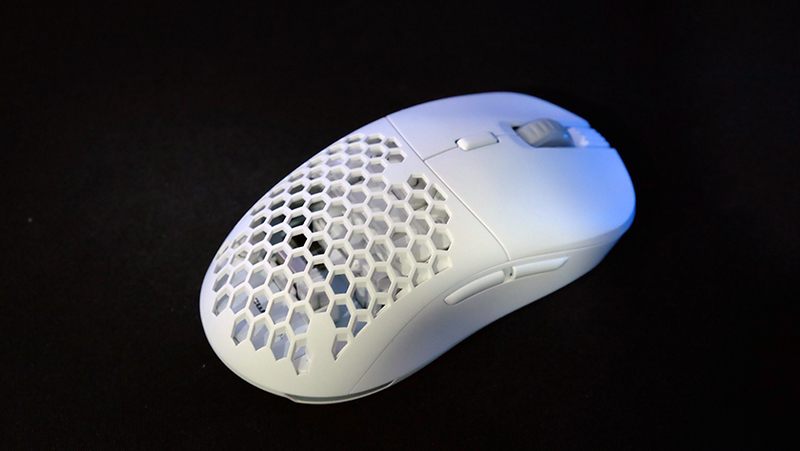 With the same shape as Logitech's much-vaunted wireless mouse, the Pulse might not score any points for originality or novelty, but it sure scores for function. Its shape is exceedingly comfortable and versatile, and it's difficult to see anyone having a problem with it. It works well with most grip styles, although it is on the larger side so folks with smaller hands might find it less agile in hand.

The modular side buttons add even more versatility, allowing you to configure the mouse for left- or right-handedness, or have side buttons on both sides if you wish. 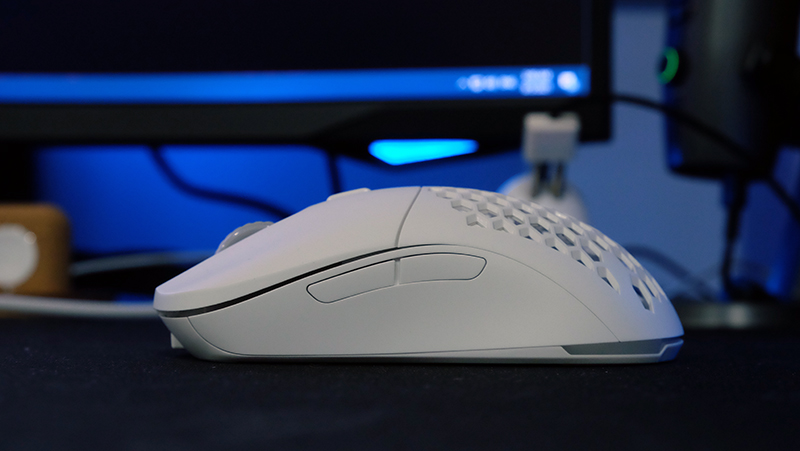 The sensor is a 16,000DPI PixArt PMW3335 optical sensor, which is basically a low power version of the PMW3389 and better suited for wireless mice. Tecware is claiming up to 50 hours of battery life, and the sensor offers flawless performance with no noticeable acceleration or jitter. However, the same can't be said of its wireless performance. There's frequent lag and skipping with the dongle plugged into the back of my PC. It seems like the mouse could really use an adapter in which to plug the dongle at the end of the cable, so you can bring it closer to the mouse for a better connection. 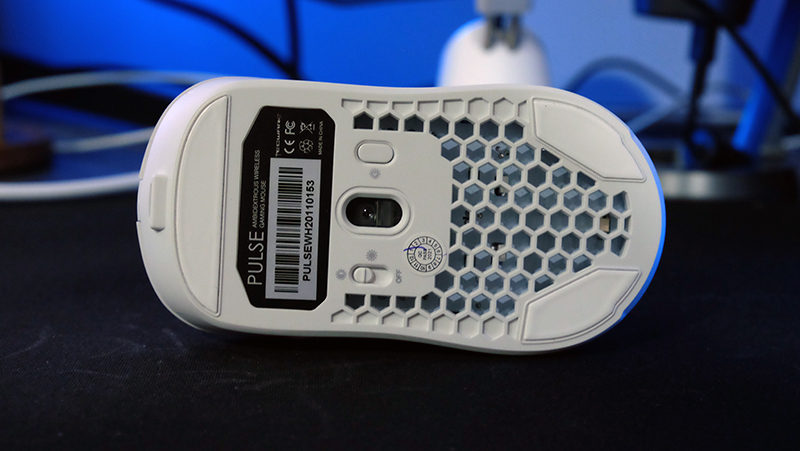 The paracord-style cable plugs into the mouse via a USB-C connector in the front. It's soft and super flexible, with minimal cable drag, and I like that the dated micro-USB port hasn't been used here.

The software itself offers myriad options to choose from, but it could use some polish. One quirk I noticed was that the "Improve pointer precision" option was checked by default, which introduces some prediction to your mouse movements. You should definitely check to make sure you have that turned off. 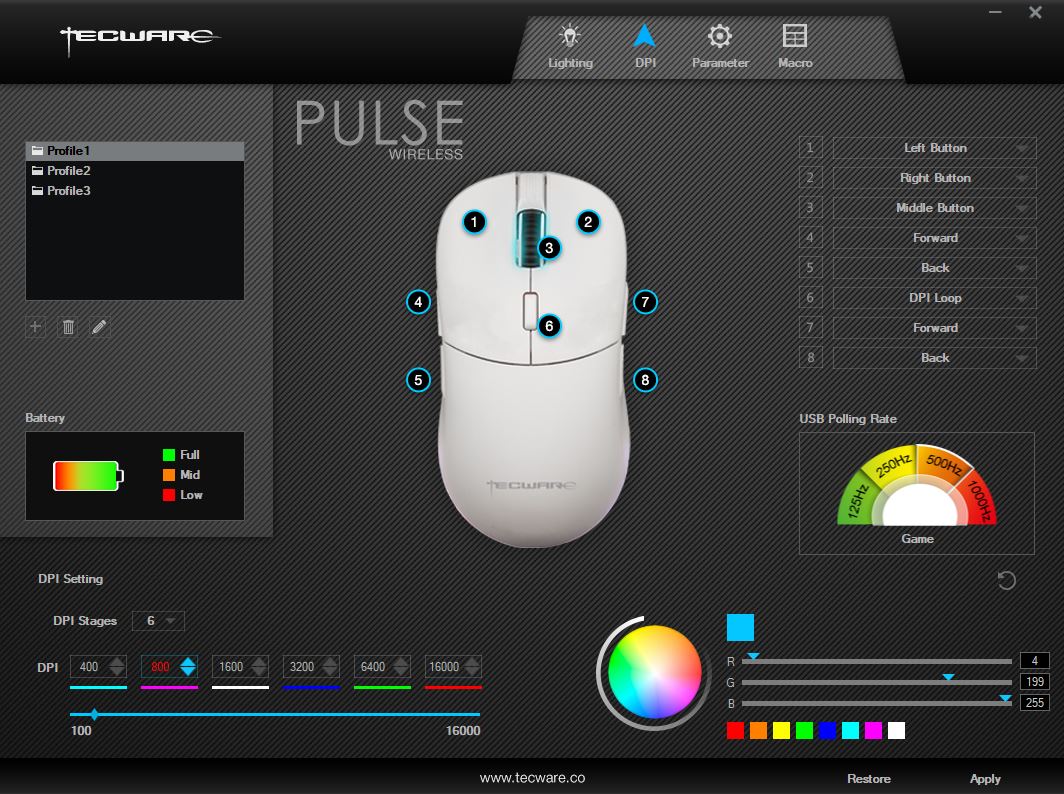 The mouse is illuminated by RGB lighting at the scroll wheel and around the base. To conserve battery, the lights only come on when you're active and moving the mouse about. An eco mode setting goes a step further and turns off the RGB lighting around the base, so only the scroll wheel and Tecware logo at the rear are lighted. You can enter eco mode with the switch at the base of the mouse. Another button at the base also lets you change the RGB light patterns on-the-fly. 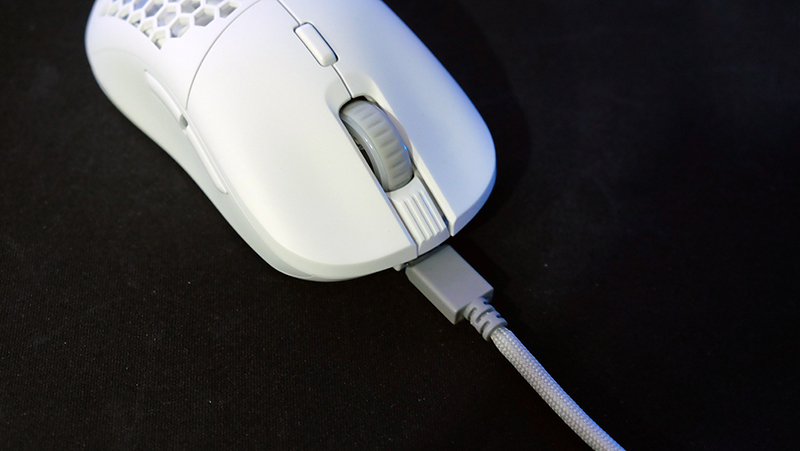 At S$59, the Tecware Pulse packs a lot of features into a very small price tag. Incredibly, it's even cheaper than the SuperSolid Gemini One. I want to say that it's a budget G Pro Wireless, but the flawed wireless performance stands in the way of that. While your mileage may vary, it's difficult to recommend the mouse on the merits of its wireless performance.

A lot of the mouse's value rests on how it performs wirelessly, but given that that doesn't seem to be able to operate reliably, it seems like some sacrifices were made to achieve that price tag. If the Pulse was a wired mouse, I'd say unreservedly that it's a solid offering. But because of the erratic wireless performance, it becomes a mouse that you could maybe take a gamble on, on the off chance that it works for you. And if it doesn't, at least it won't have made much of a hole in your bank.

Interested to pick one up? You can do it from the comfort of your home through Tecware's official LazMall store. To sweeten the deal further, as a HardwareZone reader, Tecware is offering you a $9 off voucher to go with the purchase. So grab the voucher here and bring the price down to just S$50.

Write a Review
Compare This | Specifications
Very affordable
Safe, versatile shape
Flexible, paracord-style cable
Not as light as it could be, despite honeycomb shell
Unreliable wireless performance
Some rattling when shaking
Software could use some polish
Our articles may contain affiliate links. If you buy through these links, we may earn a small commission.
Sponsored Links