Tecware Phantom 96 review: A TKL keyboard with a numpad

Tecware Phantom 96 review: A TKL keyboard with a numpad 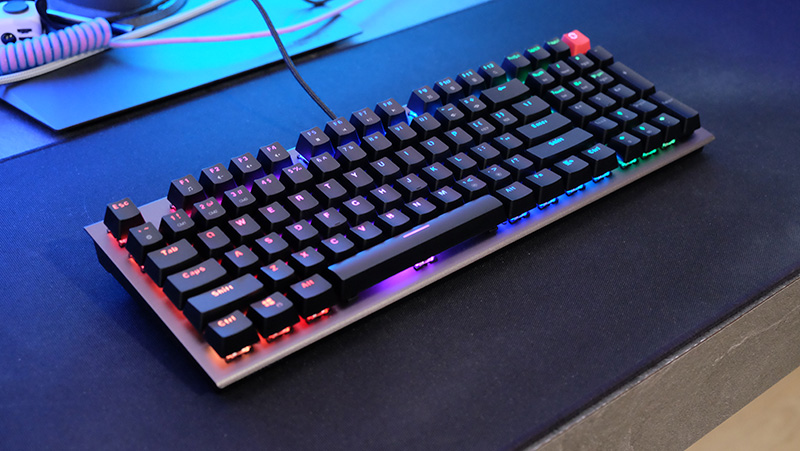 Get the best of both worlds

The tenkeyless keyboard is probably among the most popular keyboard form factors today. It lets you retain most of the keyboard's core functionality, like the function keys, arrows, and home cluster, while providing a more compact and ergonomic design.

Its smaller size is easier to centre, and it also leaves more space for your mouse and reduces strain on your shoulders when you've got one hand on the mouse. Put simply, it's better for your posture, a pretty big plus point when most of us spend hours each day glued to our screens.

That aside, I get that some people may still need a dedicated number pad. A 96-key keyboard could provide a middle-of-the-road option for someone who wants the best of both worlds, offering a number pad on a keyboard barely larger than a standard tenkeyless model. It's an effective and elegant solution, provided you don't also need a dedicated home cluster all the time. 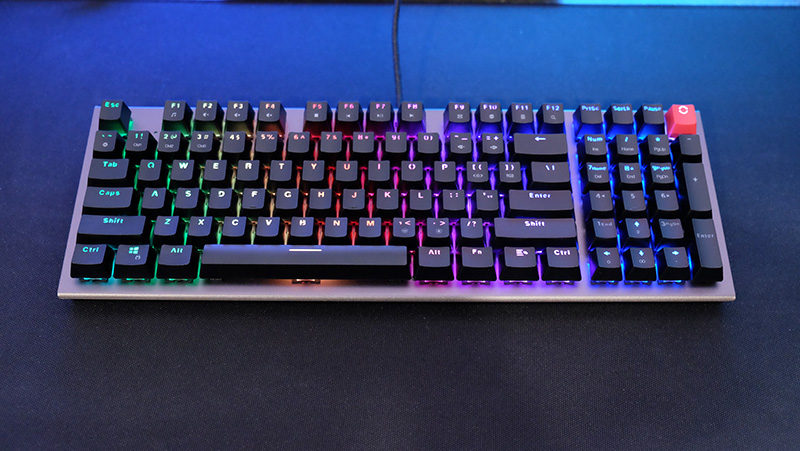 The Tecware Phantom 96 is one such keyboard, and the home cluster is actually bound as a secondary layer to some of the number keys. 96-key models also still aren't that common yet, and the Phantom 96 may be one of the most accessible ones around. And in true Tecware fashion, it's very attractively priced as well, costing just S$79.

Like other Tecware keyboards I've reviewed, such as the Phantom Elite, the Phantom 96 does a good job of packing a ton of features into a rather affordable package. This includes per-key RGB lighting customisations, doubleshot ABS keycaps, and a detachable braided USB-C cable.

My review unit comes equipped with Outemu Red dustproof switches, which are linear switches with an actuation force of 50g. Like their Cherry MX counterparts, they also have a 2mm actuation distance and total travel distance of 4mm. These being so-called dustproof switches, the familiar cross stem is enclosed by walls as well, not unlike Kailh Box switches or Razer's own Green, Orange, and Yellow switches. 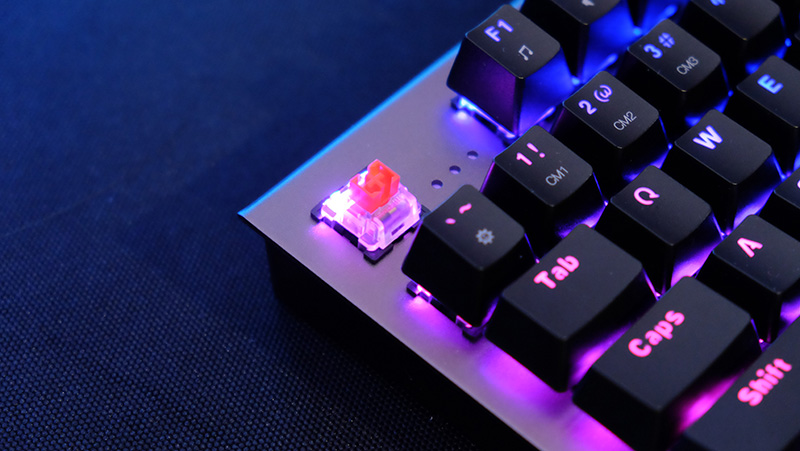 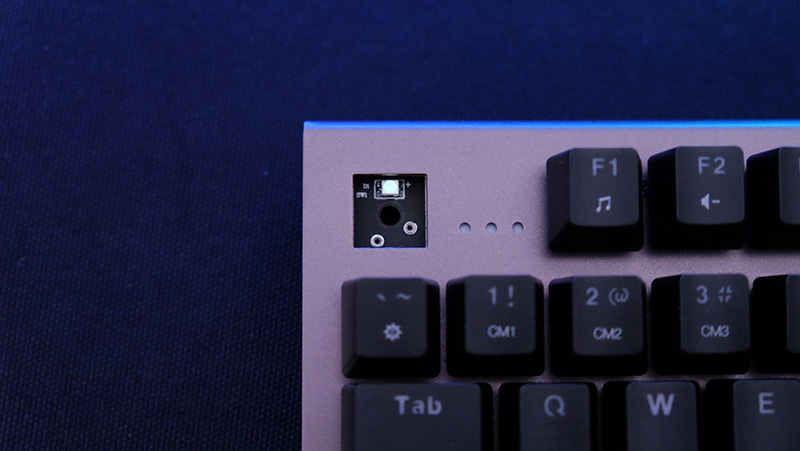 The Outemu Reds are reasonably enjoyable to type on, but they are far from the smoothest linears that I've tried. Still, it's not as if they're awfully scratchy either, and I can't really complain given the price. There is some switch wobble, but it's nothing excessive and you probably won't even notice it if you're not looking for it. The stabilisers do feel like OEM units however, and there's a slightly mushy feel to them when bottoming out that you don't get on the regular keys.

I'd also have liked to see PBT keycaps used here, although that may be too much to ask at this price point. You'll have to make do with doubleshot ABS here, and at least the legends won't fade since they're comprised of a second piece of plastic. However, ABS will still pick up some shine over time, and PBT is far more durable in this regard.

That aside, I'm also not a fan of the font used here, and there are oddly placed gaps in the lettering that make some of the secondary symbols look kind of distorted. For example, the hash symbol doesn't even really look like a hash anymore, and there's an odd break in the loop of the "@" sign that just makes it seem like there was some sort of error in the printing. The same goes for the "&" and "%" symbols too, and I think Tecware could have just gone for a plainer looking font with solid lines. 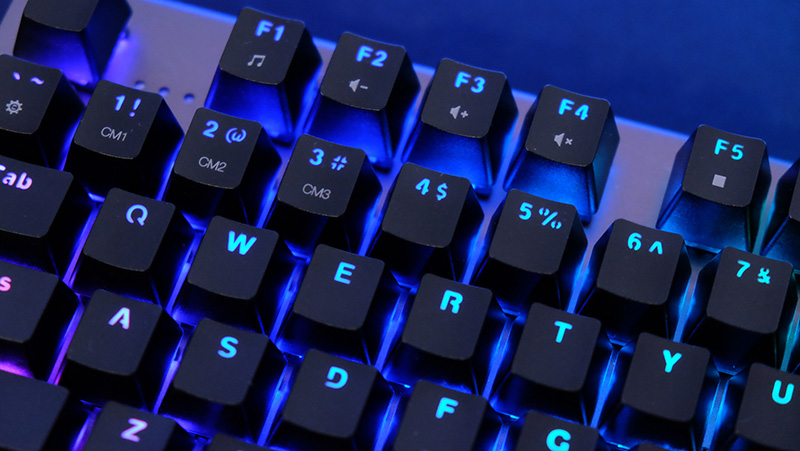 Fortunately, the keyboard backlighting is nice and even, especially since the secondary symbols have been squeezed into the same line as the main legends. And on the function row, the media key symbols are opaque, so you don't have to deal with uneven lighting at any point. The keys on the number pad that double as the home cluster do look a little cluttered though, especially for numbers 7 and 9, which have to share space with the Home and PgUp legends.

Tecware does offer software with the Phantom 96, and you can use it to program macros or customise the lighting for individual keys. You can adjust the lighting on the keyboard itself though, with brightness controls and the ability to toggle between the different lighting presets. There are a total of 18, but it doesn't seem like you can access all of them from the keyboard directly, and you'll need to install the software to try some of them out. 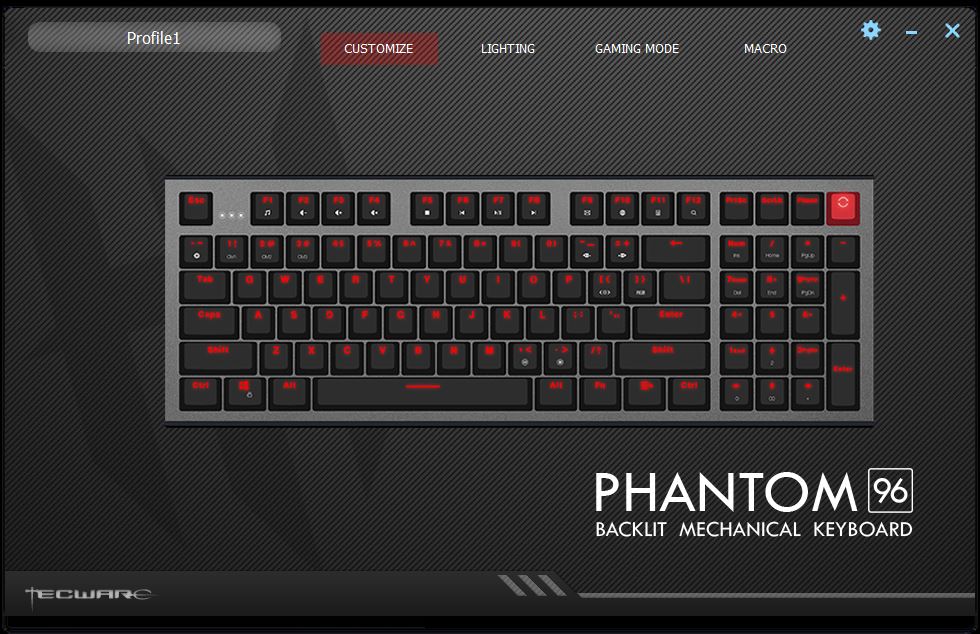 And when you hit Fn + Win, you get put into Game Mode, which automatically disables the Windows key. In addition, the software will let you choose which other keys you want to disable, including the Alt + Tab and Alt + F4 combinations.

Accessing the home cluster is easy and, thankfully, doesn't require the software to be installed. There's a bright red toggle button in the top right-hand corner, and you simply hit it to switch between numpad and home cluster functionality, the latter of which also activates the arrow keys. There's nothing confusing about it at all, and I was able to get used to it quite easily. The keys that are activated will also light up to minimise the possibility of any mix-ups. 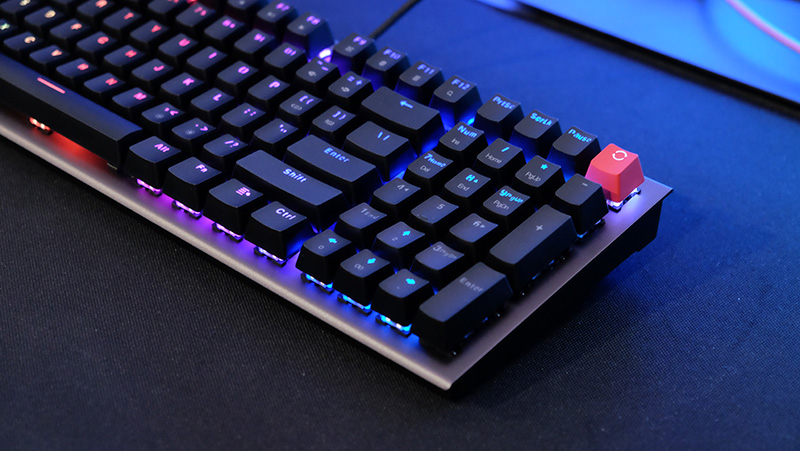 The main body of the Phantom 96 is made from plastic, but it features a gunmetal alloy top plate, which helps convey a slightly more premium feel. There isn't much heft to this board, and it weighs just 757g, but build quality feels solid enough and there's no discernible twisting or flexing.

Finally, it uses a detachable USB-C cable, complete with cable routing channels at the bottom to help your setup look neater. Tecware has also included a niche for you to stow the keycap puller at the bottom, which is pretty convenient. 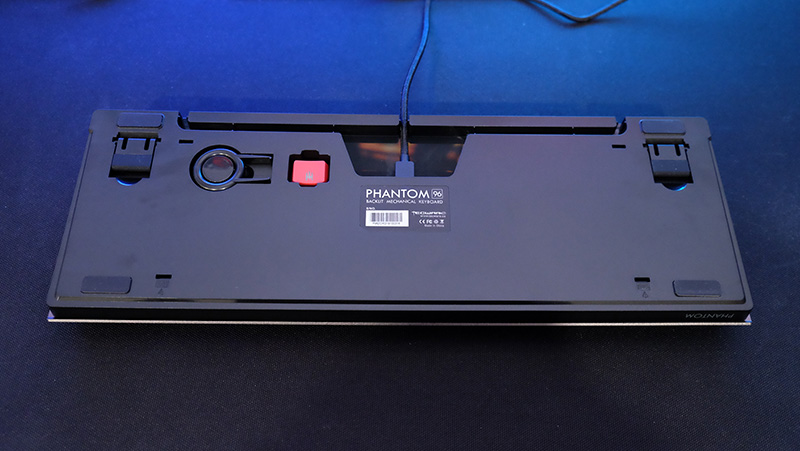 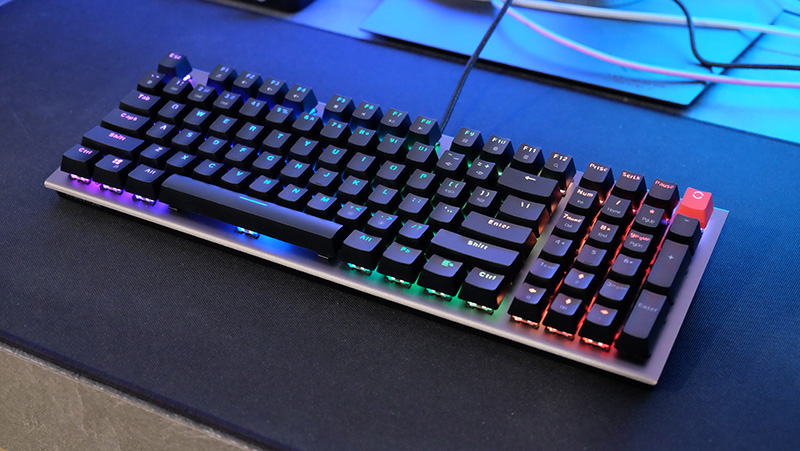 The Phantom 96 is a solid option for someone who wants both the ergonomic benefits of a tenkeyless keyboard and a dedicated number pad. It serves up the best of both worlds with few compromises, and at just S$79, it is also pretty affordable. I'd have liked to see PBT keycaps used here and perhaps the use of a more conventional font, but these not deal breakers. And at any rate, the keyboard makes up for its shortcomings with hot-swappable switch sockets and per-key RGB lighting. Really, there's really not a lot to complain about, and it even uses the modern USB-C connector instead of something like micro-USB, which far pricier keyboards are still sticking to.

Write a Review
Compare This | Specifications
Great value for money
Per-key RGB lighting controls
Detachable USB-C cable
96-key layout great for those who want a numpad and a TKL form factor
No PBT keycaps
Keyboard lacks heft
Choice of font could be better
Our articles may contain affiliate links. If you buy through these links, we may earn a small commission.
Sponsored Links