Note: This article was first published on 3 August 2022. 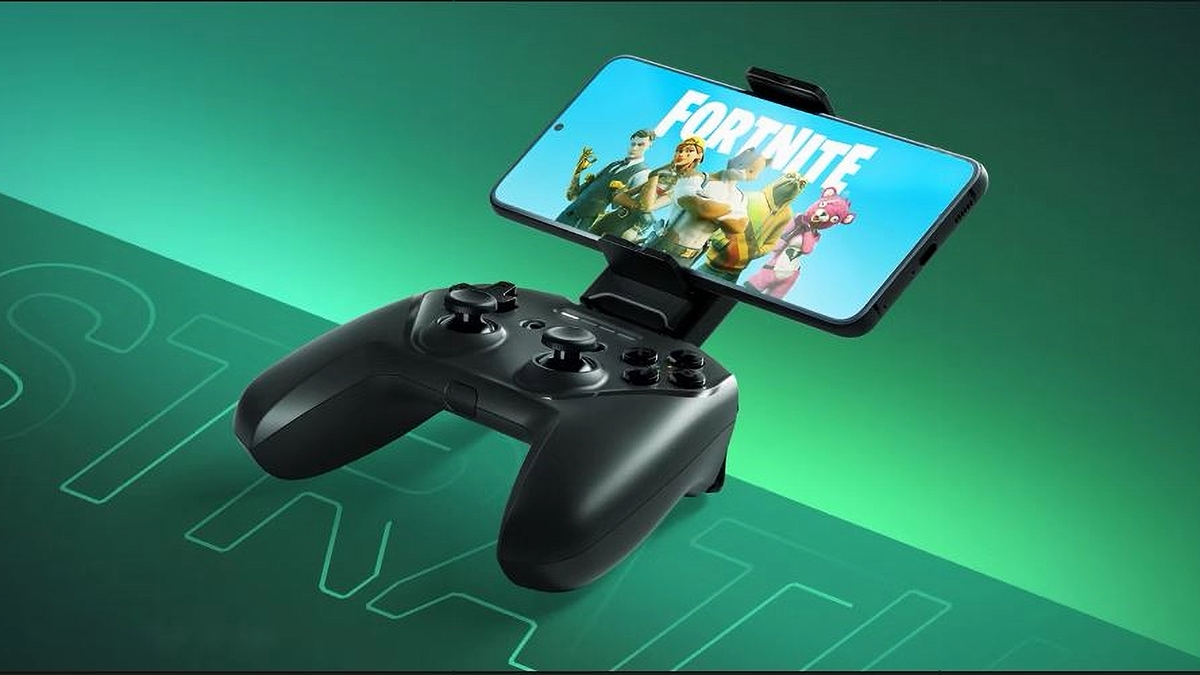 With video games catering to all sorts of different platforms these days, it's only logical that a similarly diverse spread of controllers would emerge from the woodworks as well. However, where things often get confusing is when we start making comparisons between multi-platform controllers because, at the end of the day, we just want to get the most bang for our buck.

Fortunately, if you're currently in the market for a mobile game controller that's also compatible with PCs and Chromebooks, I think you should add the SteelSeries Stratus+ to the consideration list. It's pretty solid as far as controllers come, and covers a wide variety of bases too.

It's mostly a boon to have

First and foremost, as a gamer myself, I understand that people can be very particular about their controllers. Some folks prefer smaller and more compact options, while others, like me, are partial to larger ones that offer a more comfortable grip. Naturally, this doesn't mean small controllers are inherently unwieldy - the point is that you should always prioritise the one that feels the best for you, assuming it is compatible with your chosen gaming platform. Now, let's take a look at the Stratus+ in detail. 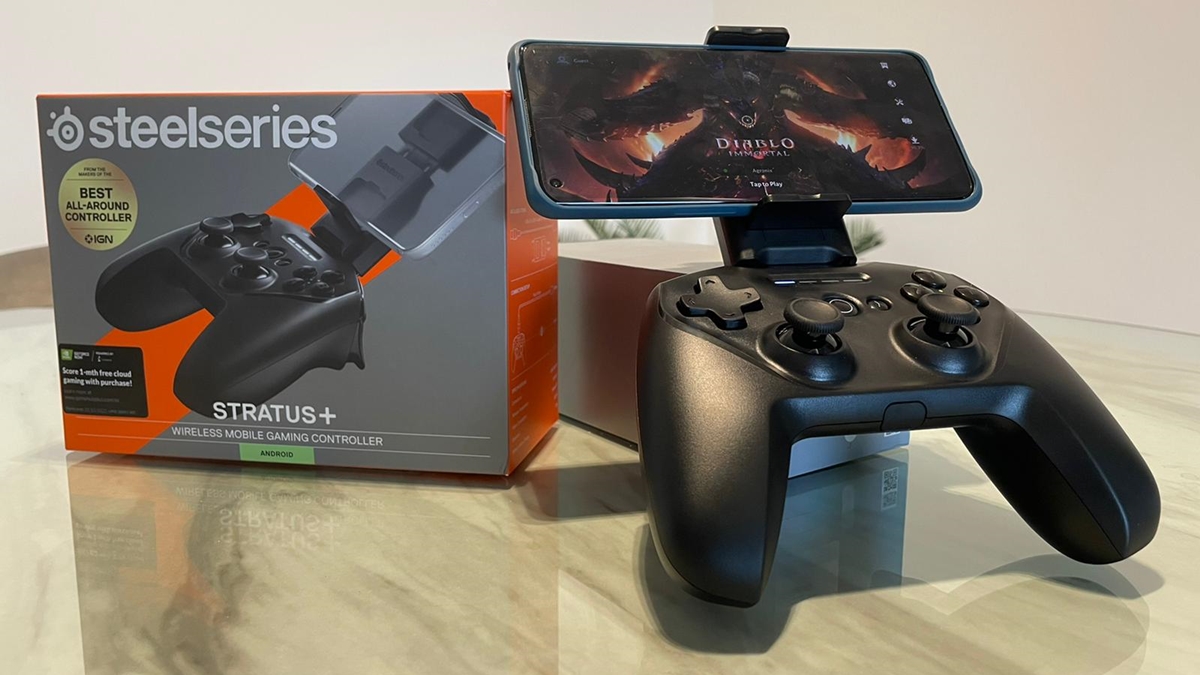 Starting off on the outside, the Stratus+ weighs in at 244g and measures 150 x 110 x 63.2 mm. Physically, it doesn't look that different from a Nintendo Switch Pro Controller, although the D-Pad has swapped places with the left thumbstick. Regardless, this is the conventional button layout for most console controllers anyway, so it shouldn't feel alien to you if you already own a PlayStation or Xbox console. Admittedly, it is much "chunkier" to hold than your run-of-the-mill DualSense, but otherwise the overall hand feel and grip are excellent.

As for the buttons and triggers, the Stratus+ sports a new trigger design with Hall Effect magnetic sensors, which enhances the tactile feel and precision. They're amazingly responsive and thus useful for intense genres that often utilise triggers, such as battle royales and racing sims. Apart from that, you've got a rather standard suite of inclusions, such as a 4-directional D-Pad, LED battery/player number indicators, a duo of clickable ALPS thumbsticks, and a quartet of ABXY input buttons. 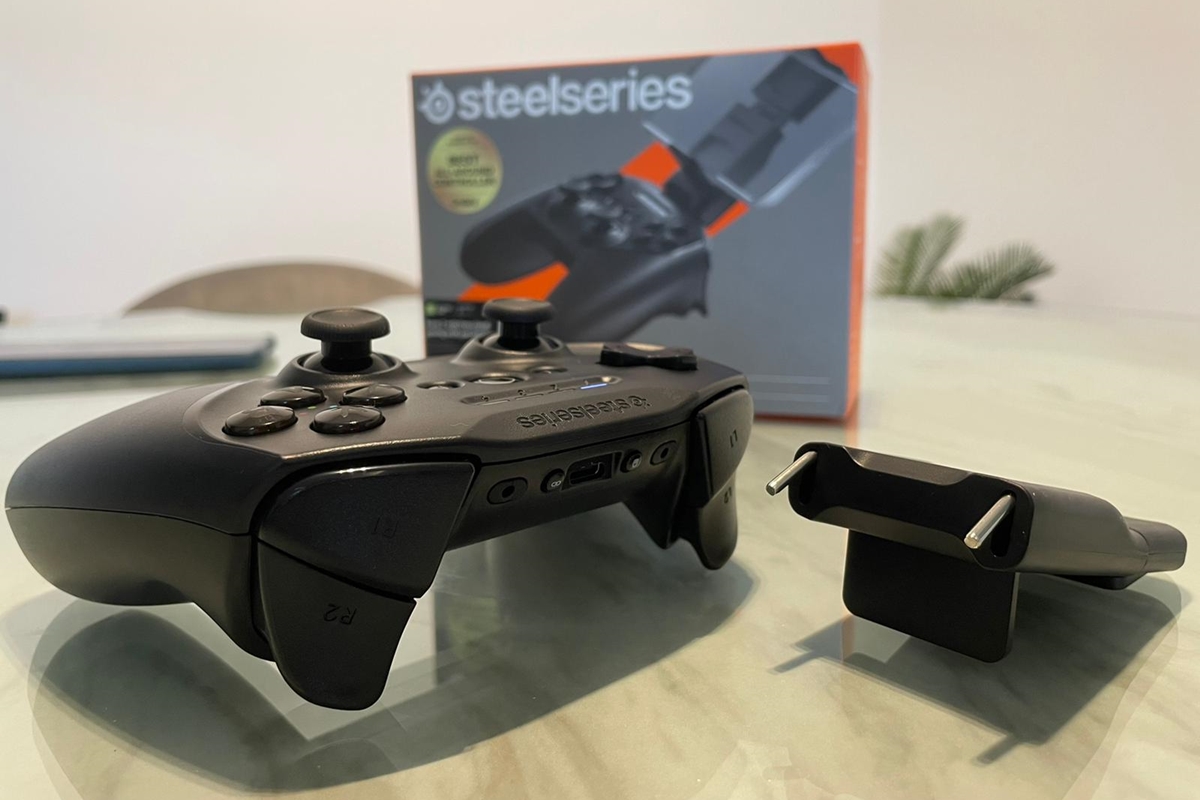 Additonally, the Stratus+ also comes with an included mobile phone clamp which, though useful, can situationally present a rather awkward problem that I'll cover in greater detail later on.

When in use, the clamp is attached to the main Stratus+ body using two retractable metal stems that slot into corresponding holes on the back of the controller, which removes the need for any extra (and often awkward) cables. Once it's "plugged in", all you have to do is use the clamps (which extend to a maximum of about 9 cm) to hold your device in place. After you're done playing, all you'll have to do is pull out the clamp and retract the metal stems. When fully retracted, it's a flat little thing that's extremely easy to carry around and store.

Play as much as you want

As for battery life and connectivity, I doubt you'll have to worry about any of those factors, with one small exception. Fundamentally, the Stratus+ is able to connect to Android devices and Chromebooks via Bluetooth LE from a maximum range of 12m, and to PCs via USB-C cable (which is included in the box!). Additionally, it sports what is arguably one of the best battery lives available for a controller at a whopping 90 hours of use per full charge, and its ultra-fast charging enables 12 hours of use after only 15 minutes of "plug-in time". Not only does this mean you'll be able to play more in general, but even when the controller does run out of juice, you won't have to wait long to get back into the action.

As such, things are all quite peachy in this area but do note that the Stratus+ connects to PCs exclusively through a cable. Accordingly, this means you'll need to bring one along at all times should you need to hook it up to your computer. In that sense, you could say the Stratus+ is a little more troublesome than some other wireless controller options, including SteelSeries' very own Stratus Duo.

Some gaps here and there 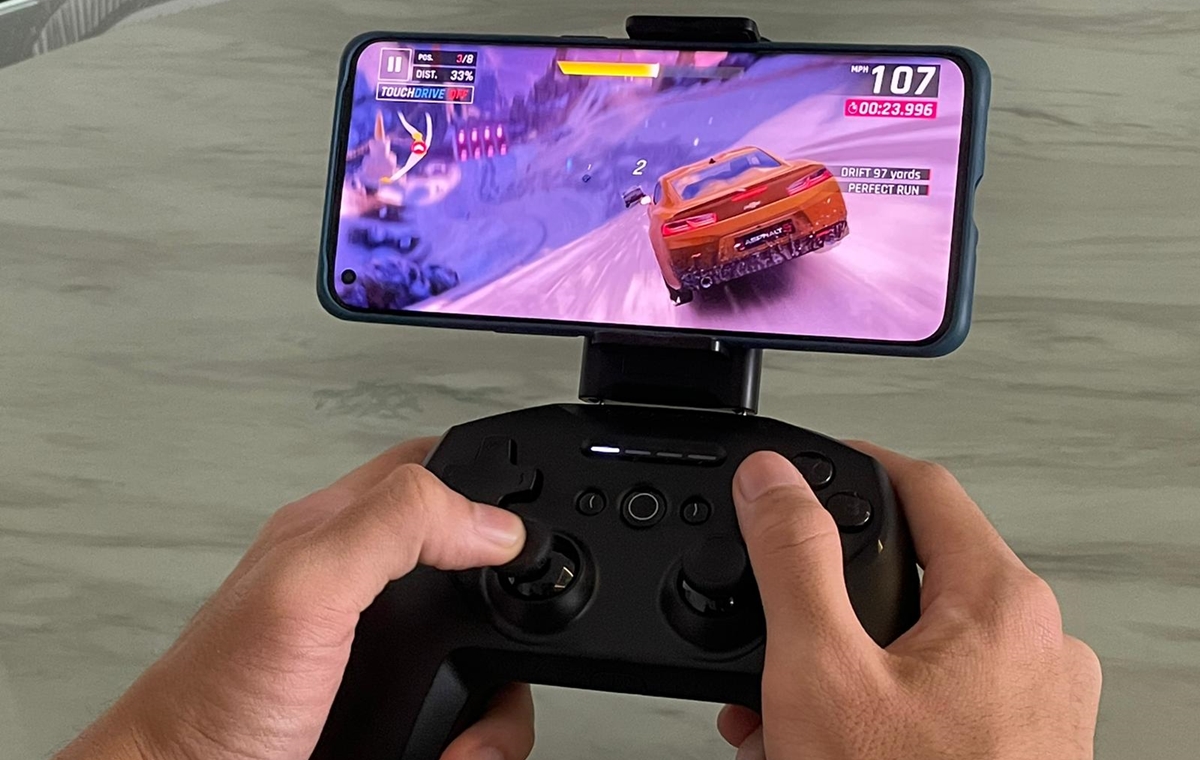 Despite excelling in most aspects, the Stratus+ does have a number of flaws, including the awkward problem I alluded to earlier. You see, unlike iPhones which usually have power buttons situated near the corners of the device, many Android smartphones, like the OPPO Find X3 Pro we used for this review have their power buttons relatively near the middle of the device instead.

This creates a scenario where the Stratus+ phone clamp might have to be attached in a lopsided manner (note how the phone is a little off-center above) so as to avoid accidentally pressing the power button during use. You could technically argue that attaching the phone the other way round instead circumvents the problem, but you might then run into a similar issue with your volume controls. Naturally, it all boils down to what smartphone model you're currently using, so, fortunately, it's only applicable on a case-by-case basis.

Aside from the whole "lopsided phone" issue, the supposed "chunkiness" of the Stratus+ can also be a deal breaker for some. Not only is it somewhat bigger than most console controllers, but you will also need to be particularly careful with it if you intend to use it on the go considering how it's structured. Case in point, unlike dedicated mobile controller options such as the Razer Kishi, the Stratus+ isn't affixed to the sides of your device, but instead props up the smartphone like a Nintendo DS. This makes it a little more prone to accidental bumps and drops on your daily commute and arguably less practical than the former for on-the-go mobile gaming.

So, should you pick this up or not? Well, the answer's probably yes if you're looking for a good general-purpose controller.

Despite its flaws which, quite amusingly may not even be applicable depending on the situation, it excels with regard to the gaming experience and price point. At S$119 a set, the Stratus+ offers precise performance that won't completely shatter anyone's wallet but also features good battery life topped off with an amazing hand feel. 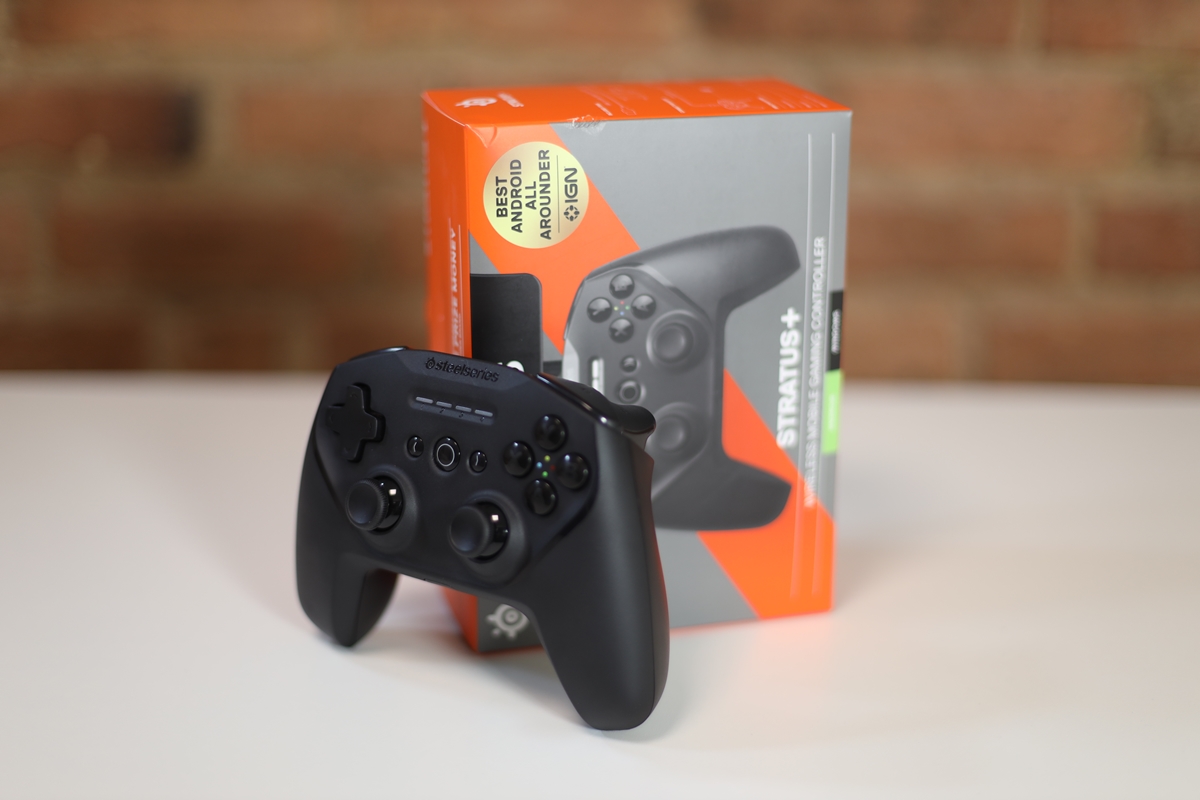 I will, of course, admit two things. The first is that it is indeed larger and more cumbersome to bring around than dedicated mobile controllers (though it is, admittedly, cheaper than the Kishi), and this factors in the aforementioned "lopsided phone problem" as well. Second, the lack of dedicated Wi-Fi support also takes away points from the Stratus+, as other wireless options can fulfill the same role without needing a cable to link up with a PC.

Nevertheless, having a better gaming experience certainly feels like it is worth dealing with that little extra bulk. In other words, while this might not be the most portable option for mobile gaming, it will still do its job well in the vast majority of situations.

Write a Review
Compare This | Specifications
Very good general-purpose PC/Android controller at a reasonable price point
Offers an excellent tactile experience overall
Relatively hassle-free setup with compatible devices
Reasonably light for its size
Might be slightly bulkier than most other controllers
PC compatibility exclusively uses USB-C wired connections
Clamp position can interfere with power/volume controls on some smartphone models
Our articles may contain affiliate links. If you buy through these links, we may earn a small commission.
Sponsored Links