SteelSeries Sensei Ten mouse review: Another icon returns, but is it enough?

SteelSeries Sensei Ten review: Another icon returns, but is it enough? 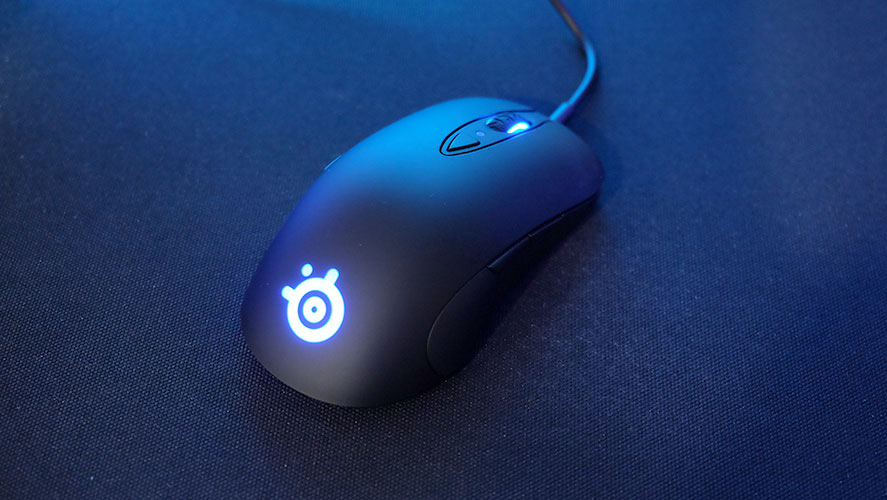 A legendary mouse gets rebooted

If a mouse was popular ten years ago, does updating it with a more advanced sensor mean that people will still flock to it in 2020? Razer seemed to think so with the DeathAdder V2, and so does SteelSeries with the Sensei Ten. Like the DeathAdder, the Sensei had quite a huge following back in the day, first as the Xai in 2009, and then when it properly took on the Sensei name in 2011.

Its ambidextrous shape, with side buttons on both sides, endeared it to both left- and right-handers. It also had a very safe and comfortable shape, one that was suited to most grip styles. The 2011 Sensei even had an onboard ARM processor that let you adjust the CPI directly on the mouse itself, without having to go to the software to do it.

The new Sensei Ten largely sticks to the same tried-and-tested formula, featuring the same shape and button layout as before. The ARM processor is gone, but SteelSeries has tossed in a new 18,000CPI TrueMove Pro optical sensor with some fancy-sounding features like tilt tracking.

But I'd argue that SteelSeries has in recent years been better known for its gaming headsets like the Arctis Pro Wireless rather than its mice. The Sensei Ten is its attempt to put out yet another best-selling mouse, but it remains to be seen whether it can compete against the latest wave of excellent ultralight mice, some of which are even wireless. 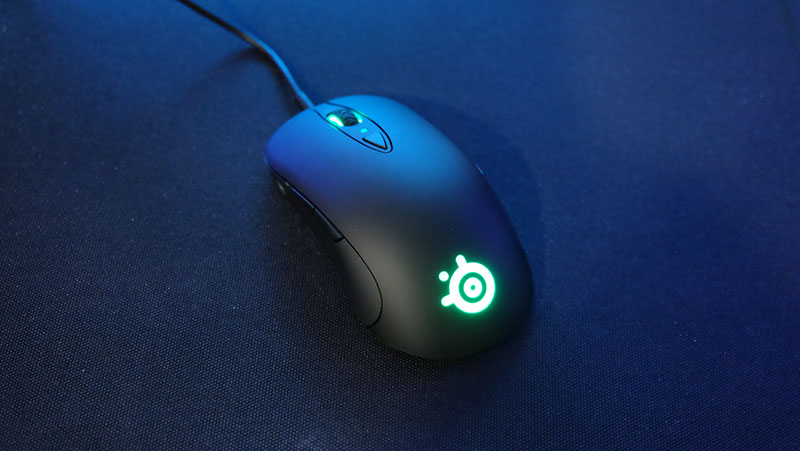 The Sensei's shape is very similar to one other mouse I reviewed recently, and that's the Endgame Gear XM1. German AWP legend Jonas "Johnny R." Bollack had a role in the design of both mice, so it's not entirely surprising. The Sensei is a medium-to-large mouse, featuring a low-profile design that doesn't exclude any particular grip style. There isn't a prominent hump that fills out your palm, and you'll be better off with Zowie's ZA series if that's what you're after. Someone with smaller hands like me should be able to palm it quite comfortably, otherwise, it'll work great for the fingertip and claw grips too. The mouse also flares out toward the rear, which makes it harder for small hands to use the fingertip grip on it.

That aside, I think the Sensei has a pretty safe shape overall, and it's one that most people should be able to adapt to quite easily. 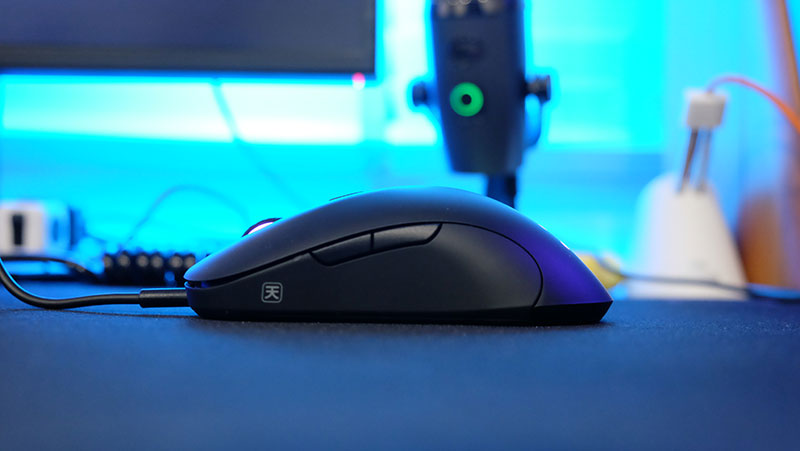 The metallic finish on the original has been replaced with a soft-touch matte black finish that is supposedly more durable. It resists the buildup of dirt and grime quite well though, and I had no complaints even after a few hours of use.

The mouse is built from what SteelSeries refers to as a high-grade polymer, but what's funny is that while SteelSeries talks about the mouse maintaining a "lightweight form factor", it's not actually that light at all. It weighs 92g without the cable, which is practically a brick by today's standards. After all, mice that weigh between 50g to 70g are almost routine right now. Even the new DeathAdder V2 weighs 82g, and that is one big mouse. I don't mean to say that the Sensei Ten is a huge drag to use, but having been spoilt by lighter mice, the additional weight is very obvious. The SteelSeries mouse just feels a lot less agile and nimble, and I was a lot less sure of my shots when sliding around a corner to peek an enemy in Modern Warfare. I wouldn't say it affected my gameplay, but the increased weight did make me less confident when it came to things like quickly flicking to an enemy sprinting across my screen. 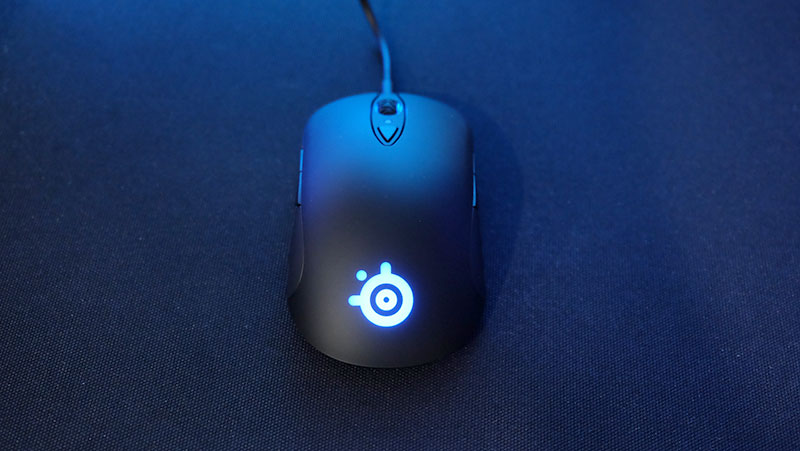 Fortunately, build quality is solid, with no noticeable rattling or flexing anywhere. Like the DeathAdder V2, the Sensei Ten also doesn't feature a split trigger design, and the mouse 1 and 2 buttoms are part of the rest of the top shell. Newer mice have all these as separate pieces, and the reason for that is so the rest of the shell doesn't have to flex every time you click. Furthermore, it helps facilitate a more consistent feel when clicking. I don't think this was too much of an issue on the Sensei Ten, but the mouse 1 and 2 buttons were not as crisp as I'd like them to be, despite SteelSeries' use of what it says is a dual-spring mechanism for improved durability and better feel.

The side buttons are nice and springy though, and left-handers will appreciate the presence of buttons on the right too. I'd recommend disabling the buttons on the side where you're not using them, in order to guard against accidental presses. 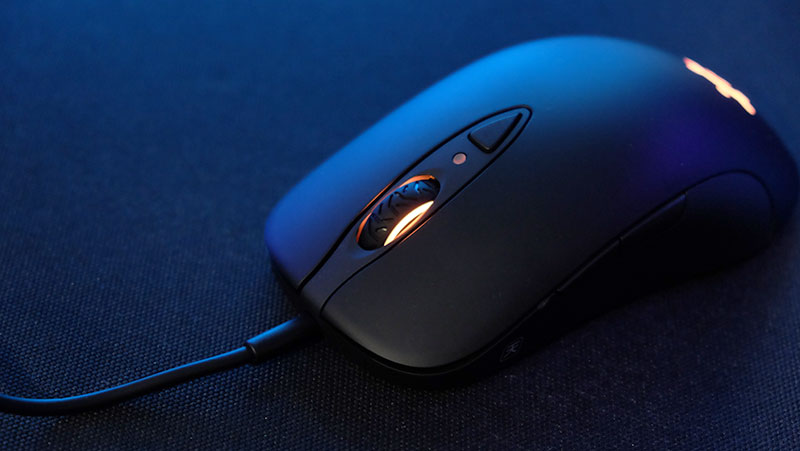 A button for switching the CPI sits below the scroll wheel, so you can quickly toggle between the five onboard CPI stages. The scroll wheel is smooth and quiet, which is great news. However, while the notches are still far more clearly defined than on, say, the Finalmouse Ultralight 2, a little added resistance would have made it more satisfying to use for me.

SteelSeries has included some large mice feet on the Sensei Ten, which look unchanged from the original. If you're looking for some third-party feet, anything made for the original Sensei should fit. The stock feet are pretty decent, with no scratchiness out of the box. They're not the smoothest I've encountered, but I'd be hard pressed to find any other fault with them. 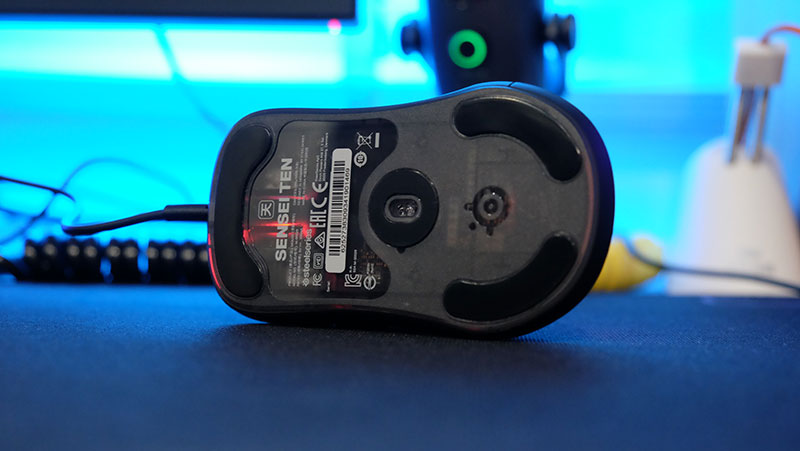 As a final design flourish, SteelSeries has etched the Chinese character for heaven, 天, on the left edge. The bottom of the mouse is also transparent, inspired by classics like the Game Boy Color.

A rubber cord with a rather flexible strain relief section rounds out the mouse. Unfortunately, while the cord is more flexible than your standard braided cable, it still retains quite a bit of memory from the packaging, and it's noticeably heavier than the paracord-like cables on many top mice today. I would not use this mouse without a bungie.

The 18,000CPI optical sensor sure looks impressive on paper, but you're probably more interested in the tracking performance. I'm happy to say that tracking was flawless, and I didn't experience any issues with spinning out or anything like that. The sensor also supports something called tilt tracking, which basically lets the mouse track consistently even when you set it down at an angle. I imagine this would be of more interest to low sensitivity players who constantly have to pick up and reposition their mouse, but then again, it's not like other sensors without this feature have widely reported issues in this area. 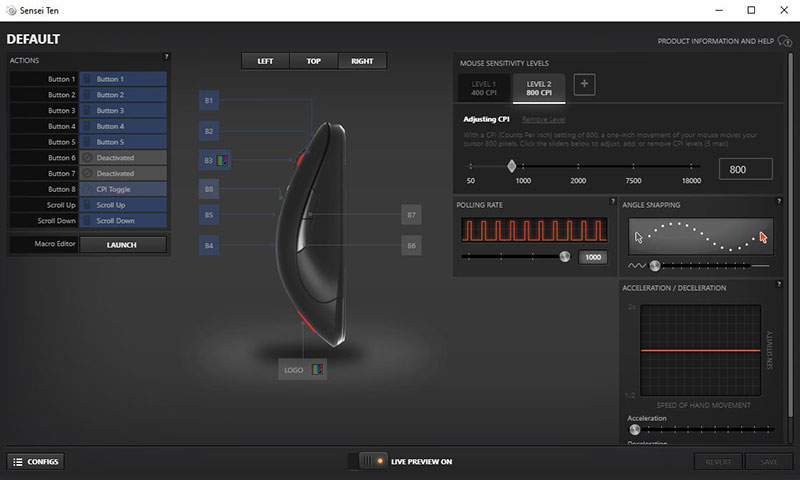 To cap things off, you can customise the RGB lighting on the SteelSeries logo and scroll wheel independently. The SteelSeries Engine software offers a wide range of customisations, and the only thing missing is probably the option to tweak the lift-off distance. You can switch between different views of the mouse to more easily customise the buttons, and also add or remove CPI stages as you please. 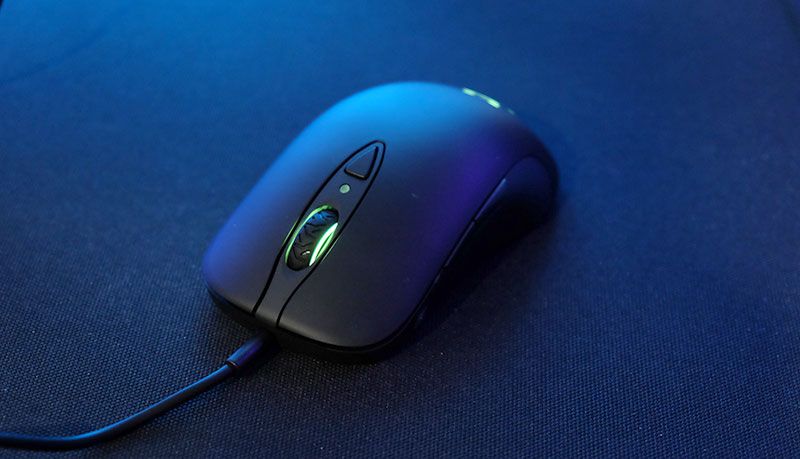 The SteelSeries Sensei Ten is an update of a beloved classic, but it unfortunately still feels a little dated. It's missing a couple of key features that are present on most top mice today, such as a super flexible paracord-style cable and light weight. At 92g, the Sensei Ten almost seems like a mouse that came out three years ago, and the rubber cord leaves a lot to be desired. The updated sensor is welcome, but it doesn't do a lot to meaningfully differentiate the Sensei Ten from the likes of the popular PMW3360/PMW3389 sensors and all their variants.

The DeathAdder V2 is also a refresh of a classic, but it is at least significantly lighter and pays attention to existing trends with the inclusion of a new and more supple cable. Razer also added its new optical switches, so it's got a lot more going for it from a technological standpoint.

The Sensei Ten may have a cool new "Ten" moniker, but it still feels a lot like the same Sensei from back then, albeit with slightly revamped innards and small design tweaks. If you're a fan of the original, you'll probably be happy with the latest iteration, but there is otherwise little reason to spring for the Sensei Ten over the other excellent alternatives on the market. And at S$119, it's also more expensive than something like the Glorious Model O- or Cooler Master MM710, which are far lighter and have better cables.

Write a Review
Compare This | Specifications
Comfortable, ambidextrous shape
Good build quality
Flawless optical sensor
Rather heavy at 92g
Rubber cord not as flexible as paracord-style cables on other mice
Overall a rather unexciting upgrade coming from the original Sensei
Our articles may contain affiliate links. If you buy through these links, we may earn a small commission.
Sponsored Links