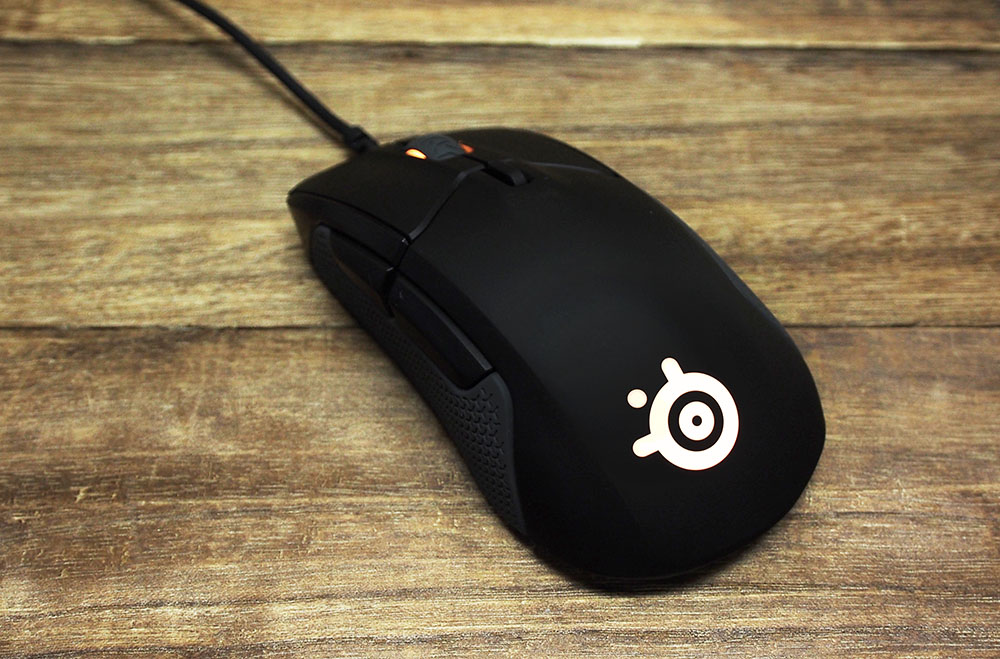 The SteelSeries Rival 300 is one of the most popular gaming mice out there, but it's not without its faults. Many people find the shape a little too large, and its Pixart PMW3310 sensor, while perfectly serviceable, is a little dated now compared to Pixart's newer PMW3360. At 103g, it's also slightly on the heavy side. SteelSeries does have other mice in its Rival lineup with the 3360 sensor, but both of them - the Rival 500, and the Rival 700 - aren't ideal for competitive FPS gaming. The 500 has 15 buttons on it and is designed for MMO gaming, while the 700's 135g weight is just too heavy for competitive FPS.

Fortunately, SteelSeries has now released the Rival 310, an update to the original Rival 300 with a smaller, lighter build, and fitted with SteelSeries new TrueMove 3 Optical sensor, which is SteelSeries' customized version of the Pixart PMW3360.

Despite the name, the Rival 310 actually has a shape closer to the Rival 700 than the Rival 300. There are still similarities to the 300, but it's smaller and more compact overall, with a thinner front end that flares out more towards the rear. The hump on top is smaller than it was on the 300, but it's still positioned towards the back of the mouse. The front area slopes forward gently, just like it did on the 300. Like the 300, there’s a subtle curve on the left side for your thumb to rest in. The two side buttons are better positioned this time, and are slightly further back than they were on the 300, which makes mouse button four (the more forward one) easier to hit. 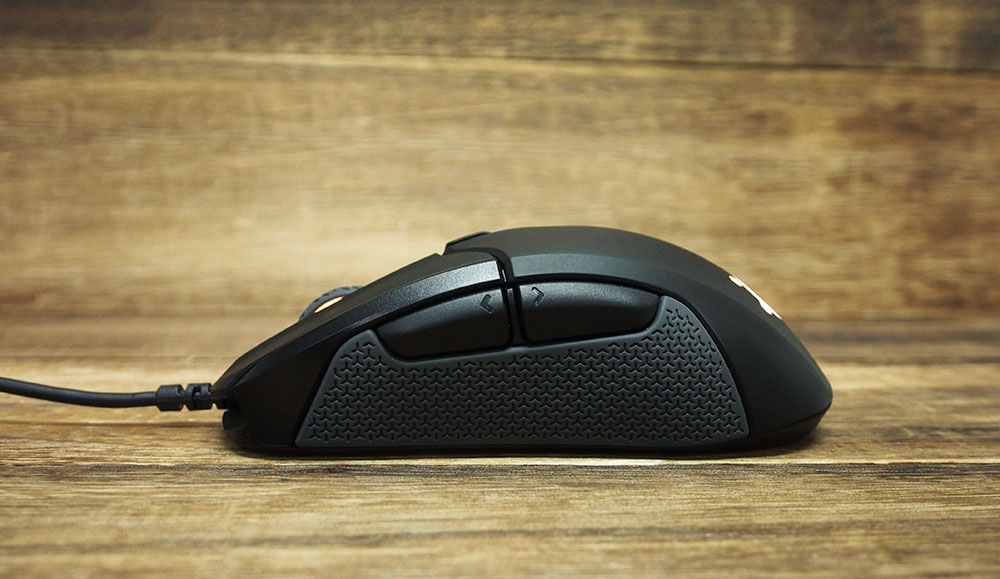 The 310's ergonomic shape makes the mouse best suited for right-handed palm and claw grip gamers, and the large rear end helps keep the mouse secure in the base of your palm. It’s a comfortable shape and fairly safe for most hand sizes with a length of 127mm and a grip width of about 62mm. To compare it to other mice, it feels about the same size in hand as the Zowie EC1-B and the Razer Deathadder. 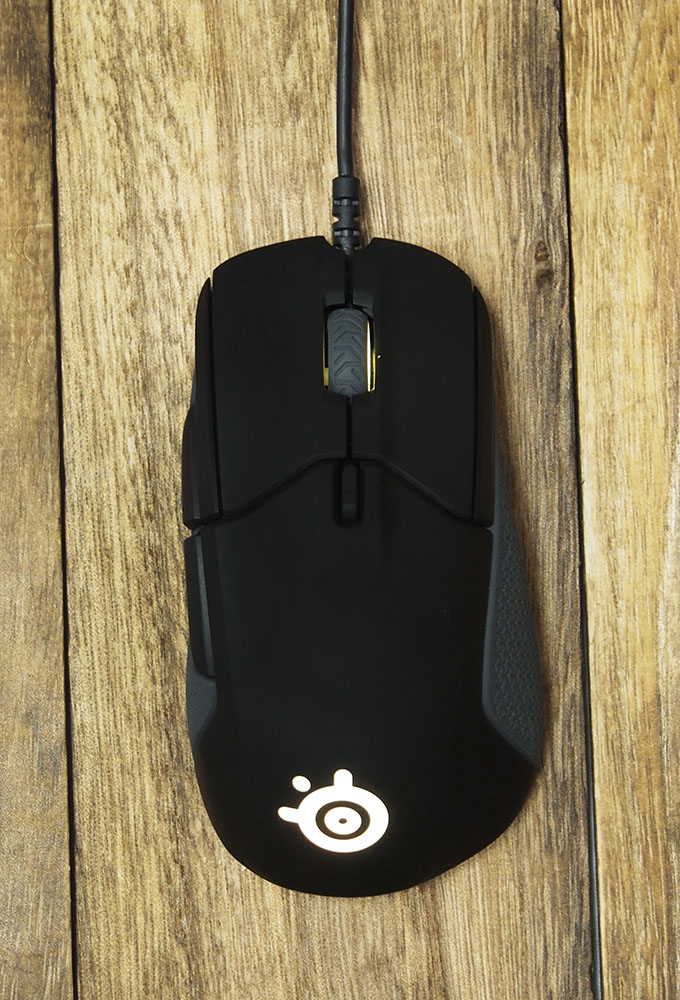 The mouse weighs a spritely 88g, making it much lighter than both the Rival 300 (103g) and Rival 700 (135g) and it feels a lot faster and more maneuverable as a result. The weight is evenly distributed with the center of mass sitting right in the middle of the mouse, despite its rather large rear end.

The 310 has a textured plastic finish that feels slightly gritty and does a great job at helping you maintain your grip. The finish holds up well and is fairly fingerprint and grease resistant, and it won't become slippery when your hands are sweaty. It's much better than the rubberized finish of the Rival 300, which would get gunky pretty fast. There are also rubberized grips on both sides for extra stability, which are great for when you need to pick up and reposition the mouse.

The left and right mouse buttons feature a split-trigger design - which means both buttons are separate from the shell itself - with Omron switches underneath. There’s a little bit of pre-travel with both buttons but it wasn’t enough to cause any problems. The switches themselves are crisp, and are light enough so that finger fatigue isn’t an issue, while still being stiff enough to prevent misclicks. 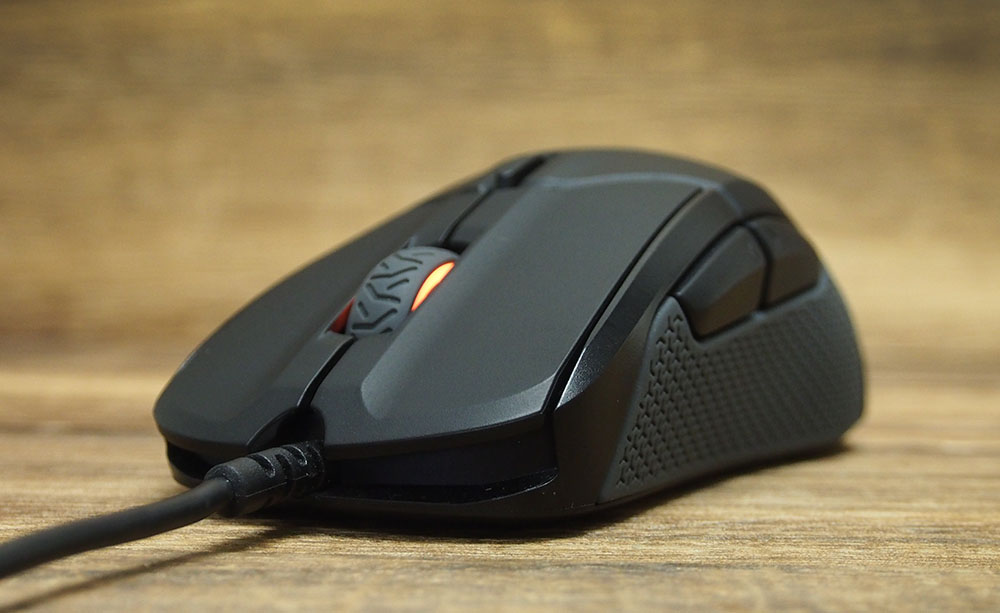 The scroll wheel has the same rubberized finish as the side grips and has an interesting notch pattern cut into it. It’s a fairly basic scroll wheel and, while it’s fine for web browsing, it’s a bit light and a little loose, so it’s not ideal for bunny hopping. Behind the scroll wheel there’s a dedicated DPI button. 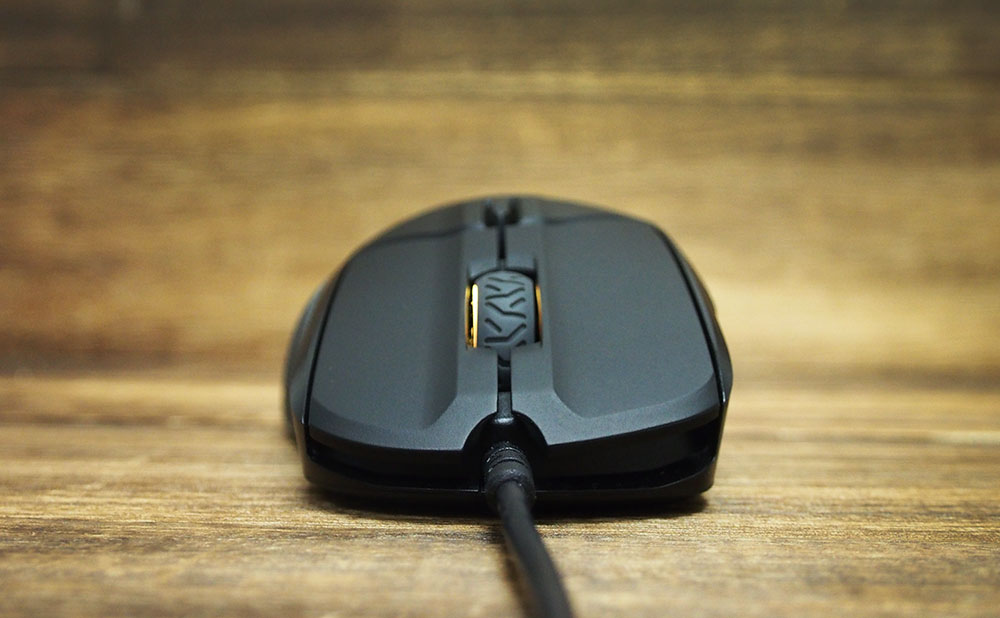 DPI can be set to anywhere between 100 to 12,000, but you’ll need to install SteelSeries’ Engine software to do so. You’ll also need to install Engine if you want to customize the RGB lighting on the logo and scrollwheel. 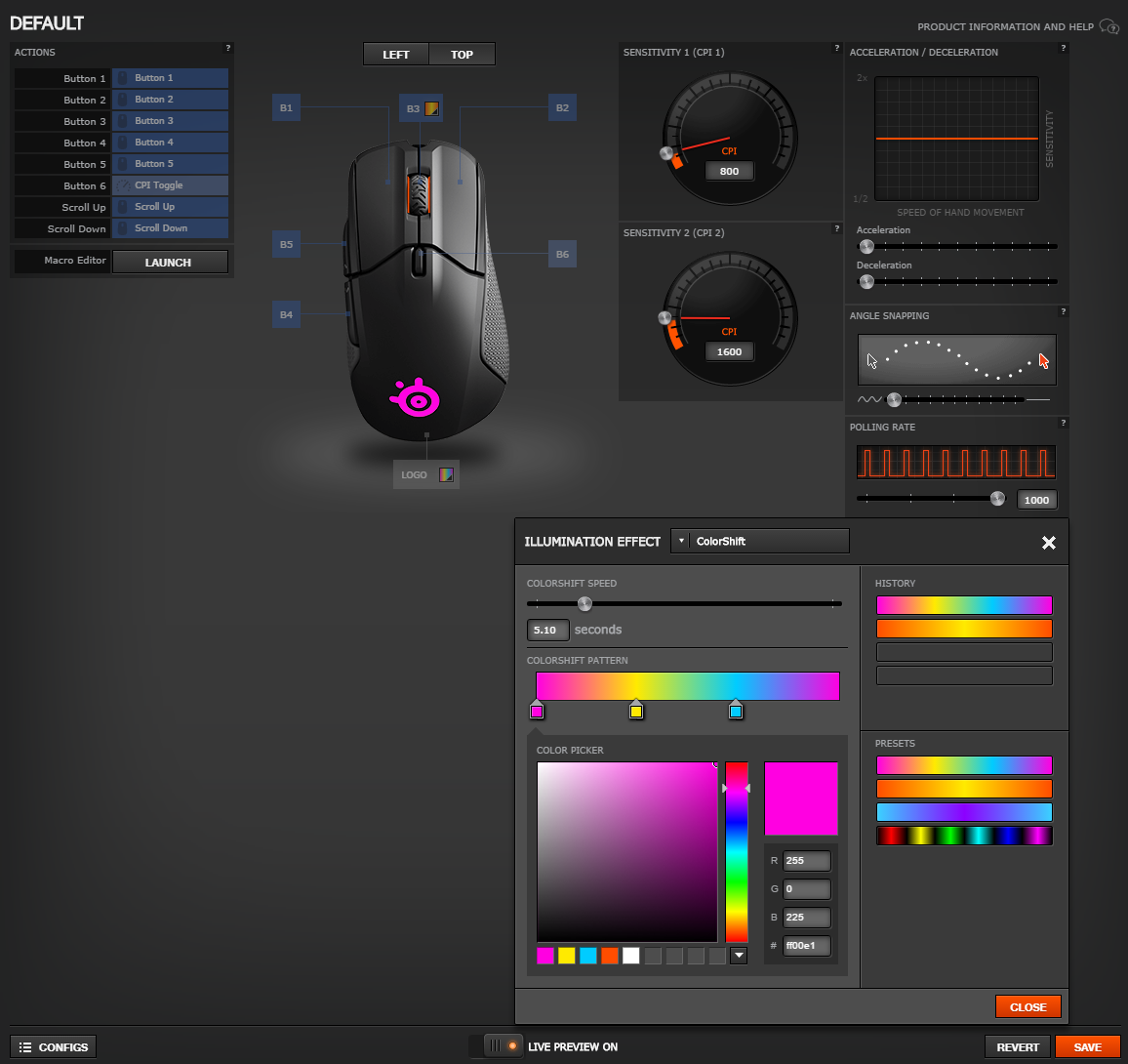 The cable on the 310 is made of a lightweight, soft rubber that I really like. It reminds me a lot of Zowie's mouse cables, and doesn’t kink or drag on the table and it should work with most mouse bungees.

On the underside of the mouse, the 310 has an unusual three feet setup with one large foot in front, and two smaller ones at the rear. The feet are smooth and fast, and I didn’t notice any difference in feel or movement compared to more traditional two and four feet setups. 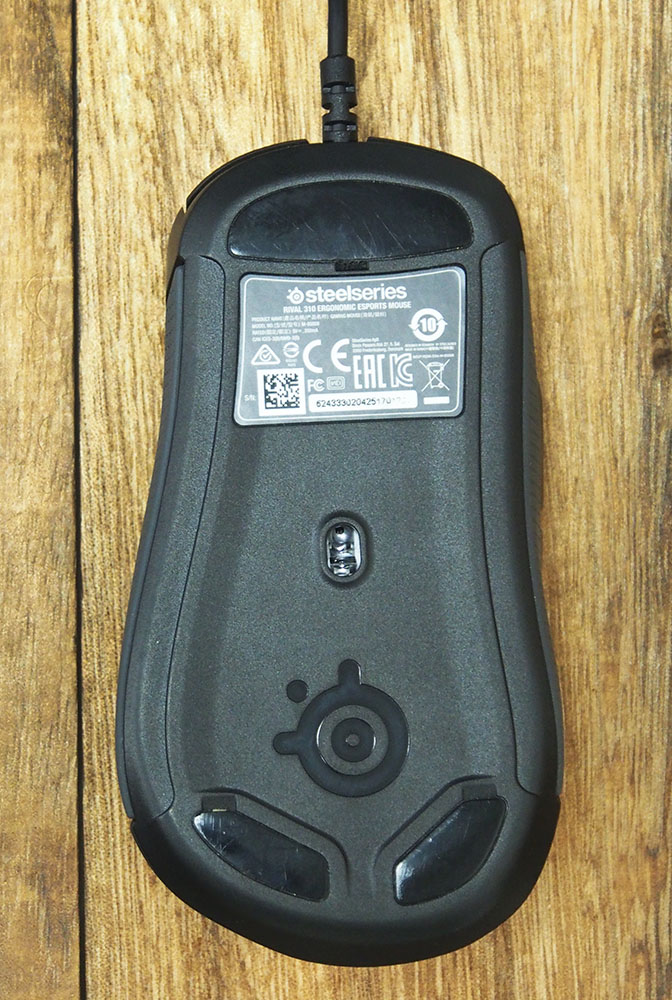 The Rival 310 uses SteelSeries’ TrueMove3 optical sensor, which is SteelSeries’ custom version of the Pixart PMW3360. The sensor is located right in the middle of the base, which matches its weight distribution. SteelSeries’ implementation is on par with other popular 3360 mice, and tracks flawlessly at any DPI, with no acceleration, delay, jitter, smoothing, pixel skipping, or spin out issues. Lift off distance is fairly low, and is roughly equivalent to 1 CD (~1.2mm).

The Rival 310 improves on the original Rival 300 with a smaller, more compact shape, a lighter build, and a comfortable but grippy finish. Add to that the best optical sensor around right now and you've got one of the best FPS mice out there.

Write a Review
Compare This | Specifications
Comfortable ergonomic shape
Perfect TrueMove 3 (Pixart PMW3360) sensor
Light 88g weight
Soft, lightweight rubber cable
Scroll wheel could be better
Some slight pre-travel on mouse button 1 and 2
Our articles may contain affiliate links. If you buy through these links, we may earn a small commission.
Sponsored Links