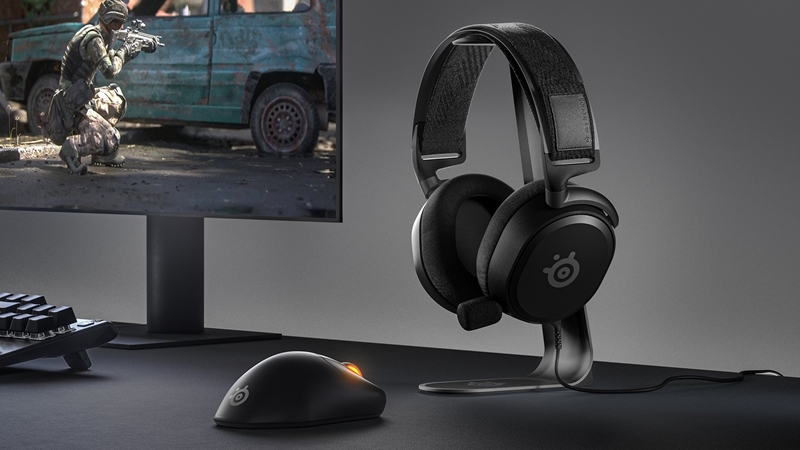 With a whizz, a clap, and an affordably-priced bang, the SteelSeries Arctis Prime Gaming Headset makes its way onto the scene, as well as my to-do list for the week. As part of the company's brand-new Prime Gaming trio of peripherals, it probably goes without saying that this sleek black headset is tailored to provide high-quality audio even in the most intense of gaming sessions.

Although I will admit that its appearance seems to suggest otherwise.

Compared to many other gaming headphones on the market right now, which tend to feature a wealth of RGB lighting and customisable add-ons by the dozen, the Arctis Prime, with its distinct lack of any of the above certainly doesn't appear to be as impressive as it actually is. Yet, if you're looking for a pair of affordable, high-performance headphones that won't nuke your bank account to smithereens, I can hardly think of a better candidate.

You'll probably forget you're wearing them 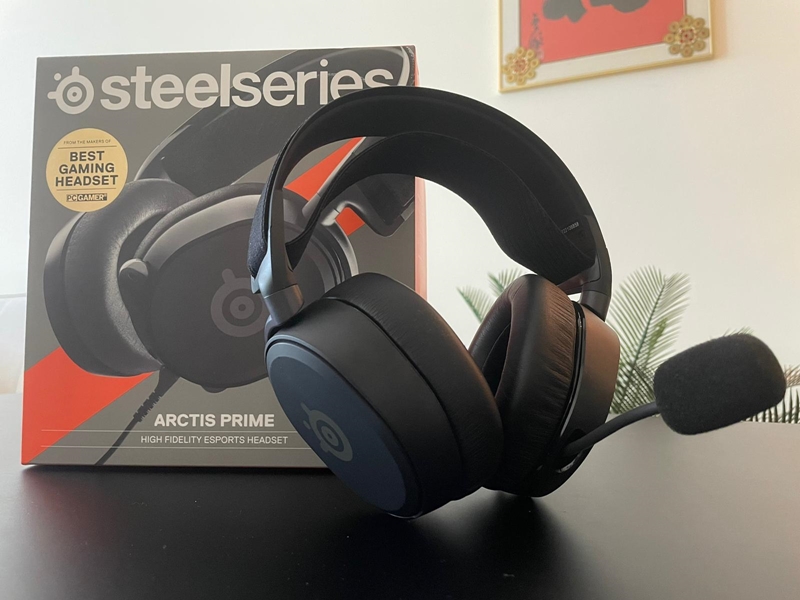 Let's take a look at the outside first. Externally, as mentioned above, the Arctis Prime doesn't appear to be packing much firepower. Sporting a black plastic frame with soft leather-like earcups, with a removable ski-goggle style elastic headband held in place by a velcro strap on the left end, there's honestly nothing about it that really screams "premium". However, it's also worth noting that unlike the bulk of other headphones I've tried, the Arctis Prime's earcups offer surprisingly good breathability, while still maintaining a gentle but firm grip around my head. So, not only did I not feel like tearing them off immediately after putting them on, but there were in fact times where I even forgot they were there.

Yet, that surprising level of comfort doesn't change the fact that the Arctis Prime looks relatively run-of-the-mill. It still packs that baseline degree of sleekness that allows it to gel with pretty much any gaming setup, but it's also "basic" to the point that you don't even see any RGB lighting around. In terms of controls, all you've got is the bare minimum, too - a volume knob, a mute button for the microphone, and two jacks - one for the dedicated cable and a regular 3.5mm audio jack. They're all consolidated on the left earcup, allowing for fingertip access at a moment's notice. 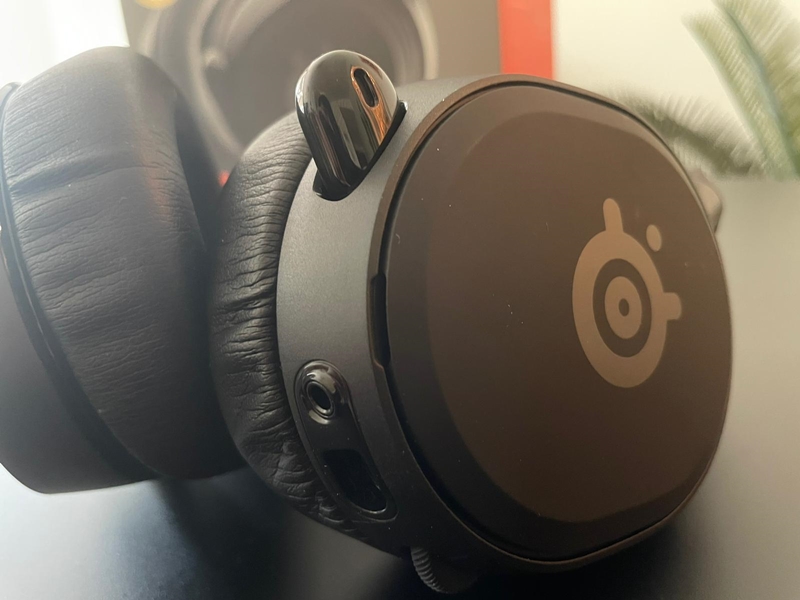 As for the mic, and this is probably the fanciest bit of the headset with regards to design - the Arctis Prime features a retractable, bi-directional noise-canceling boom microphone, which you can pull into and out of the left earcup as needed. Additionally, the package also includes a pop filter that fits snugly onto the tip of the microphone, though of course you'll have to remove it to completely retract the microphone into its niche.

I'll be frank - at this point, it comes across as a very comfortable but also very basic pair of headphones. Amusingly though, that's exactly what SteelSeries is going for here. The Arctis Prime, which weighs in at a reasonable 348g isn't made to feel premium, or even look like the most amazing pair of headphones on the market. Rather, they're designed to get the basics of good audio down right, which, as I found out, is exactly what they've managed to do.

Apparently, despite its unassuming appearance, the Arctis Prime headset is actually equipped with the same high-performance audio drivers as the Arctis Pro, meaning you'll be getting audio of a much higher standard than what you're paying for. SteelSeries' design team has merely removed all of the fancy doodads that aren't mandatory for a rock-solid gaming experience, instead choosing to focus on providing that clear, crisp audio that players actually need to enjoy and win their games. 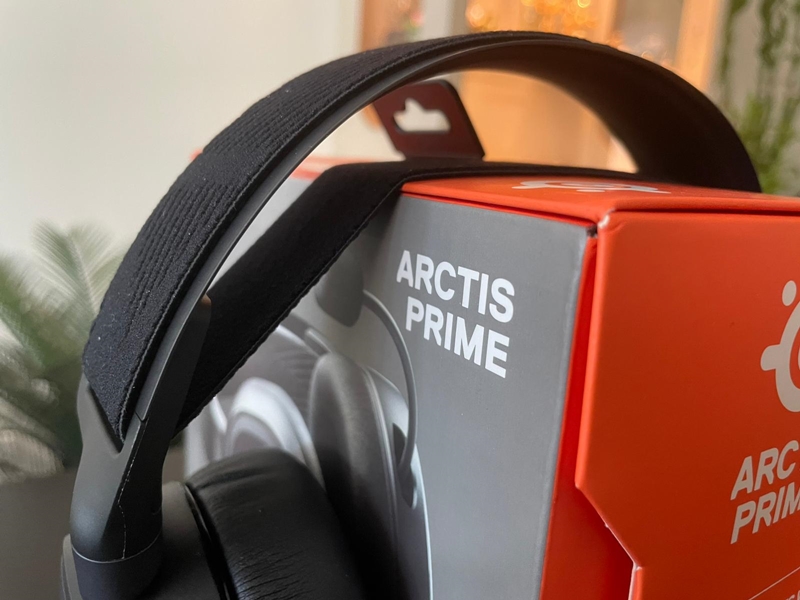 In fact, I was particularly impressed with how well the Arctis Prime handled audio at higher volumes - not only was the delivery still as clear as it would have been at a moderate volume, but distortion was pretty much absent as well. Many headphones around this price point, such as the Logitech G335 tend to struggle with clarity when it comes to high intensity or electronic tracks like sister's noise by fripSide, but the Arctis Prime simply breezed through it without breaking a sweat. It performs just as well in a wide variety of games too, although of course it doesn't offer an ultra-distinct soundstage like the one from JBL Quantum ONE.

Still, considering the difference in price points, I think you're still getting much more bang for your buck than you would with other headphones, and it will still serve you well regardless of whether you're playing something intense like Call of Duty: Black Ops Cold War or a low-tempo title like Ori and the Will of the Wisps. In summary, even if its outward appearance doesn't set it far apart from your baseline pair of gaming headphones, the Arctis Prime is probably one of the best value-for-money options I've had the pleasure of testing in a while. Not only does it deliver audio of a quality that's "way above its pay grade", but the fact that it's also immensely comfortable to wear for both short and long gaming sessions makes it an absolutely solid pick. Honestly, I would say that its only real drawback is that it's fundamentally a wired headset, meaning cable management can be an occasional issue, not to mention that it lacks the convenience and tidiness of its wireless brethren.

But apart from that, it's got pretty much all that a gamer might need from a proper headset and then some. As a matter of fact, there's only one reason I won't be picking this up for my own use, and that's because I'm quite comfortable with (read: attached to) my current pair of gaming headphones. Otherwise, I'd pick this in a heartbeat - no questions asked.

Write a Review
Compare This | Specifications
Excellent audio quality for its price point
Extremely comfortable to wear even for long periods
Capable of handling intense audio types without suffering distortions
Small but reliable array of controls
Relatively unimpressive in terms of appearance
Lacks any distinctive features or customisation options
Cable management can be a nuisance to deal with
Our articles may contain affiliate links. If you buy through these links, we may earn a small commission.