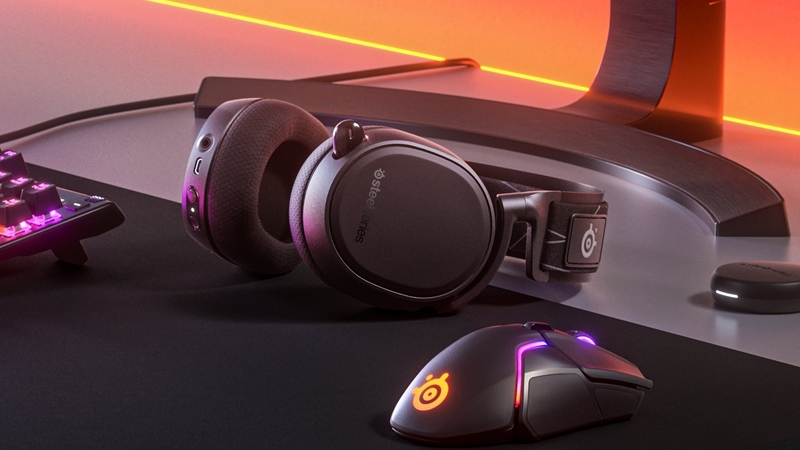 Man, SteelSeries has been on a roll lately, pushing out so many headsets and peripherals you'd think they fell from the sky like rain. However, that's not exactly a bad thing given how much I ended up liking their Arctis Prime wired headset, and now we're back with yet another model that promises impressive performance at the cost of being slightly pricier - the Arctis 9 Wireless Gaming Headset.

Of course, as noted above the company hasn't just been busy making new headsets. They've also rolled out a couple of gaming mice lately - namely the Rival 5, Arctis Prime+, and Prime Wireless, and we actually found the latter two to be decent picks if you happen to be looking for a new one.

Skimming over the top

The Arctis 9 Wireless, as the name implies is the company's latest take on a wireless gaming headset, doing away with the cable management problems faced by conventional wired headsets in favour of a more "modern" approach. Specifically, it sports two different connectivity modes - as you might have guessed, the first of the duo is your run-of-the-mill Bluetooth compatibility, while the second is the lossless 2.4GHz wireless connectivity channel, which you can hook the headset up to using the associated dongle. 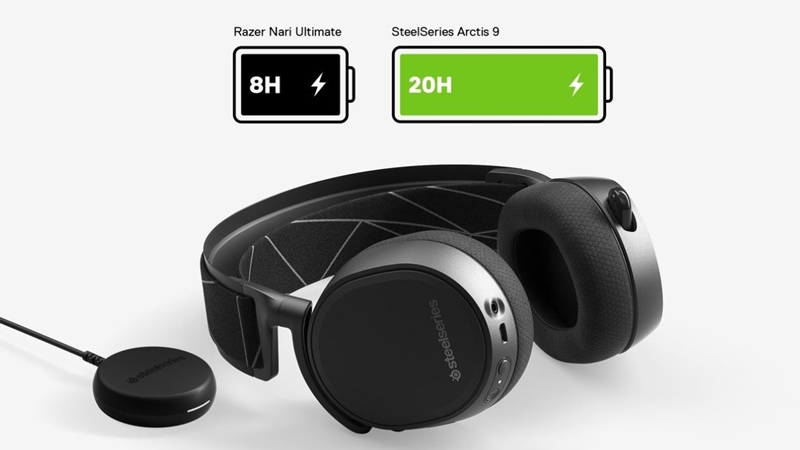 Additionally, both of these features a maximum connection range of about 12m excluding obstructions, meaning you should technically be able to grab a snack from the kitchen while playing Apex Legends in the living room. As for battery life, there isn't much of a need to worry, either - the headset has a battery life of 20 hours on a single full charge, so you won't be fizzling out of voice chat very often, if at all. Heck, that's more than twice the battery life of the Razer Nari!

It's not really "dressed to kill"

Now, before we delve into the audio experience proper - let's do a quick once-over of the outside. Externally, the Arctis 9 Wireless, in keeping with SteelSeries' usual "dress code" does away with all the fancy RGB lighting and attachments typical of your modern gaming headset in favour of a simple black outfit. Clad in an unassuming plastic shell with an elastic ski-goggle headband and a pair of swivel-able mesh earcups, it doesn't seem too far off from your baseline pair of headphones, though what's interesting is that it does certainly have a more "deluxe" feel compared to the Arctis Prime, and the ability to swivel the earcups makes it infinitely more portable too.

Moving on to the controls - the Arctis 9 Wireless is relatively tame in this department as well, though unlike its aforementioned wired cousin the knobs are split across both earcups rather than consolidated on the right. On the left earcup, we've got two things: the retractable microphone and the ChatMix dial. Now, the former is a relatively standard inclusion, but I will admit that the latter, which allows users to control the proportion of audio inputs between their game and their voice chat was quite an interesting addition, seeing as how such features are usually found on higher-end gaming headphones like the JBL Quantum ONE. 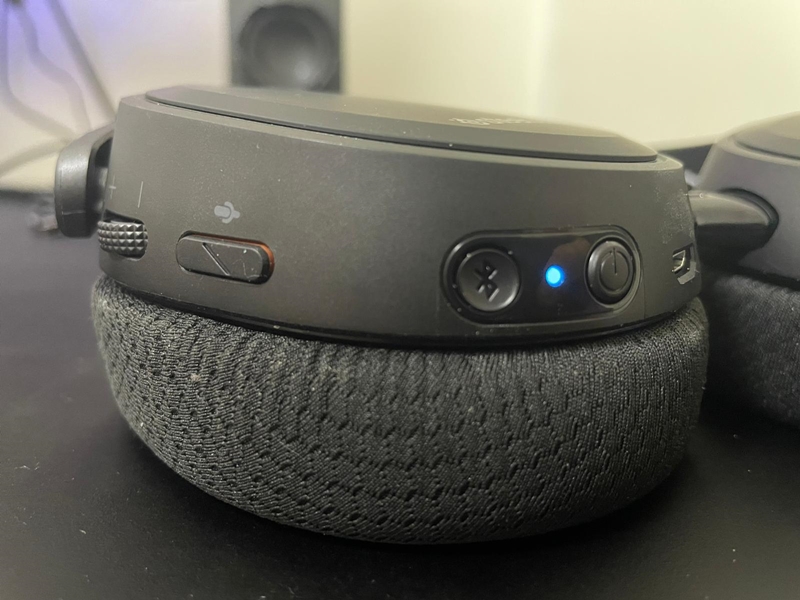 As for the right earcup, you've got the usual array of additions, such as the power button, volume knob, a Type-C port, a mute button for the microphone, and a Bluetooth button to initiate connectivity. Aside from the aforementioned ChatMix dial, whose location on the earcup proved to be surprisingly useful especially in fast-paced games like Call of Duty: Black Ops Cold War, it's pretty standard fare for the Arctis 9 Wireless.

As for wearing it, I don't think we really need an introduction to ski-goggle-style headbands and mesh earcups. Apart from being the go-to design and material respectively for most gaming headphones, the only variable here is probably users' personal preference. But as I noted with the Arctis Prime in my previous review, even though I tend to prefer leather earcups, the mesh ones on SteelSeries headphones (including the Arctis 9 Wireless) are generally great options. As a matter of fact, you tend to forget they're there when you're wearing them, and I hardly need to explain why that's a good thing - they're impressively comfortable and well-ventilated. 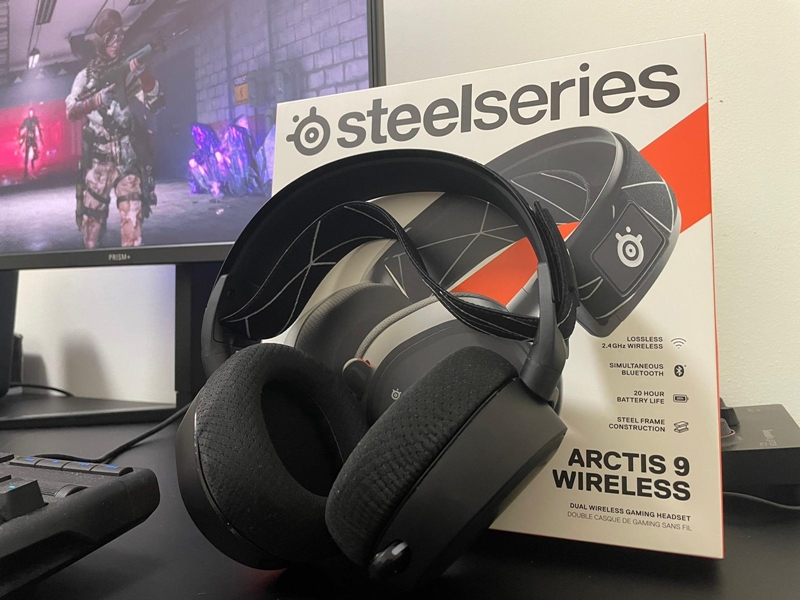 Now then, let's delve into the most important aspect of any headset, gaming-focused or otherwise - the audio. The Arctis 9 Wireless features 40mm Neodymium audio drivers, which is quite common nowadays, but what makes it stand out is the lossless 2.4GHz wireless which, when paired with the PC-only DTS Headphone: X v2.0 feature makes for some extremely impressive performances.

Granted, the soundstage isn't as dynamic or "tangible" as a true-blue top-shelf pair of headphones, but for what you're paying, I think it's pretty good. The depth of the audio delivery and the sheer clarity afforded by the Arctis 9 Wireless is quite blissful, and like the aforementioned Arctis Prime, distortion is pretty much absent even at higher volumes, and on electronic or techno tracks to boot. So, whether you're wading through a rumbling sea of gunfire, scouring the lands of a fantasy RPG, or simply chilling out to tunes on Spotify, you'll be able to really feel the world and your music tracks around you come to life with one of these on.

Speaking of which, here's where I'd like to mention the Arctis 9's Dual Wireless feature, which essentially allows you to stream audio from two different sources simultaneously. Although this certainly opens up an impressive number of device permutations that you're more than welcome to experiment with, I'm happy to report that it works well with your standard-fare combo, blasting anime music from my iPhone while evading raid bosses in Borderlands 3.

Of course, the main question here is whether both inputs will interfere with each other, and the short answer is that you probably won't really feel it. Each "side", in that sense is still rendered impressively well, and to be honest, the sheer versatility afforded by such a feature, coupled with a simple, fuss-free setup that puts many of the fancier wireless headsets on the market to shame really helps to justify the price. 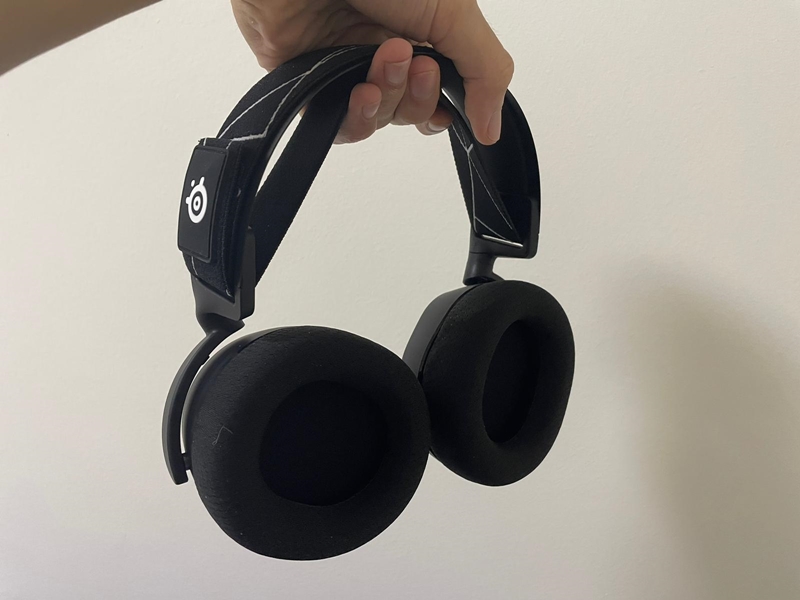 However, if I were to point out the reasons why the Arctis 9 Wireless won't be getting a perfect 10 from me, it would be in terms of the price, and if you don't mind me counting it in, the admittedly unimpressive exterior as well.

I know what I've said above - that you'll be getting impressive value from this headset that's worth the money, and yet, the fact remains that this headset will still set you back over three hundred dollars (it currently has an SRP of S$349). Accordingly, it isn't exactly the most accessible model available, especially for users who are on a relatively tight budget. This actually leads to my next point about the unimpressive exterior, and I mean that in a comparative sense. For a pair of headphones that costs more than three hundred bucks or thereabouts, it certainly doesn't look like one, and that would seem to be a common (and unfortunate) trait shared among pricier SteelSeries headsets like the Arctis 9 Wireless and Arctis Pro Wireless.

In short, you might have a hard time convincing people that you forked out a pretty premium amount for the Arctis 9 Wireless. Fundamentally, it's not that big of an issue among the more budget-friendly models since you wouldn't expect those to be drop-dead spectacular in the first place, but at the very least, most users might prefer to have a three-hundred dollar headset that's at least able to pass for one aesthetically.

A value buy if you can afford it

With all that said, I would say that you're still in good hands with the Arctis 9 Wireless if you're going in for the value rather than to make a fashion statement. Sure, it's a little pricier than most, but at least it comes with the guarantee that the audio quality is well-worth the cost, to say nothing of the near-absurd level of versatility you have here. Between the capability to link up with basically any gaming device out there, from PC to console and even Nintendo Switch, as well as the surprisingly potent Dual Wireless feature, you're technically getting a full pound for your penny's worth of investment in terms of compatibility.

Granted, the "tangibility" of the soundstage isn't the best out there, but it's definitely one of the better ones that we've seen, especially from a wireless headset. All in all, the Arctis 9 Wireless Gaming Headset toes the same line as many of SteelSeries' recent products - it's a great value buy that will deliver solid performances all-around and then some, provided you've got the cash to spare.

Write a Review
Compare This | Specifications
Simple aesthetic and swivel-able earcups makes it easy to fit into setups and transport
Clear, smooth and distortion-free audio that's surprisingly good for a wireless option
Setup is quick and clean - no need to install third-party apps or services to utilise
Compatible with everything from PCs to phones, consoles and even Nintendo Switch
No cable management worries
Doesn't look very impressive externally
Soundstage is still outclassed by the most top-tier headphones
Relatively expensive in a vacuum
Our articles may contain affiliate links. If you buy through these links, we may earn a small commission.
Sponsored Links