Take the fight to the Empire 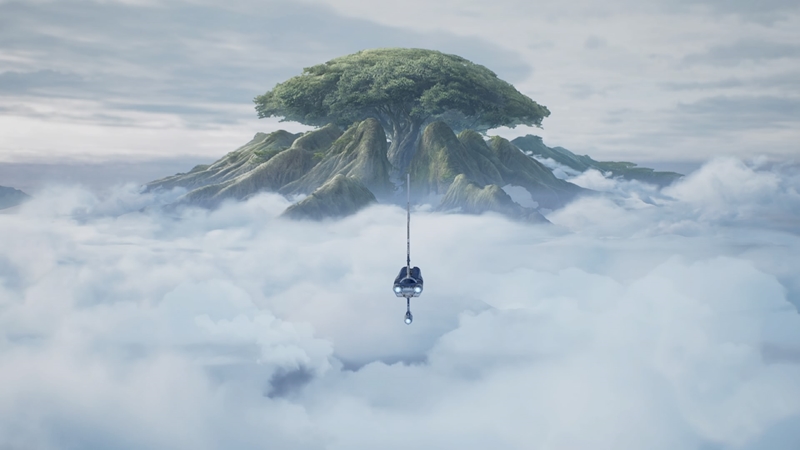 Aesthetically, there's not much to nitpick on for Fallen Order, but there is a lot that deserves praise. First of all, I think the folks at Respawn Entertainment have done a great job in terms of landscaping. Cue the artsy terms: you'll find that the appearance of the environments match its intended "flavours", in a way that you know exactly what vibe the developers are going for. For example, Bracca's industrial facades are paired with the dark, foreboding hues of an Empire-run facility, while the lush flora and fauna of Bogano are tied up with bright, tranquil sunlight. 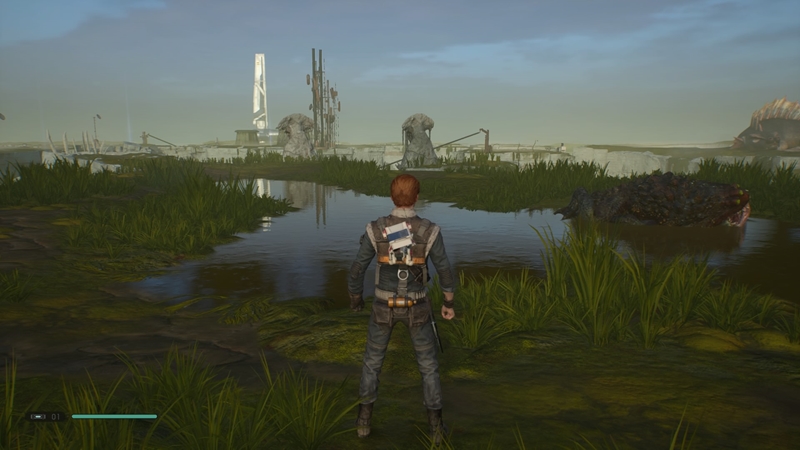 It's not just the overall image, though; the detail is on point too. Everything from facial expressions to mechanical wiring is distinct enough to identify, and all of it really helps make Cal's experiences feel just a touch more immersive.

Speaking of which, I still can't get enough of all the fancy slow-motion kills that Cal can pull off every now and then - they're absolutely cool, and are pretty much what got me through the first two dreary hours to begin with! The young Padawan might not feel super powerful until later on in the game, but hey, like Greez says at the end of the second mission, "you got some moves on ya, kid.".

Generally speaking, Fallen Order's gameplay follows the same formula as your run-of-the-mill action-adventure RPG - exploration, combat, and collectibles. It's also worth noting that all those elements, including the narrative, are fine with taking turns in the spotlight, in the sense that the game only ever focuses on one at a time. It keeps the overall gameplay a lot more compact and cohesive than most players might give it credit for since the narrative isn't unnecessarily interrupted by sudden boss fights, and vice versa.

Still, exploring the various levels in Fallen Order can be quite a tough and time-consuming cookie - BD-1's holomap display isn't the most informative nor direct since it doesn't show the path checkpoint by checkpoint. Instead, it just tells you where the target destination is, and which parts you've explored - finding the way there is entirely up to you. That can be quite confusing, especially for someone's who more used to simple point-and-go map overlays like those in Borderlands 3. In fact, I recall spending close to an hour just trying to figure out how to get back to the ship on one level! 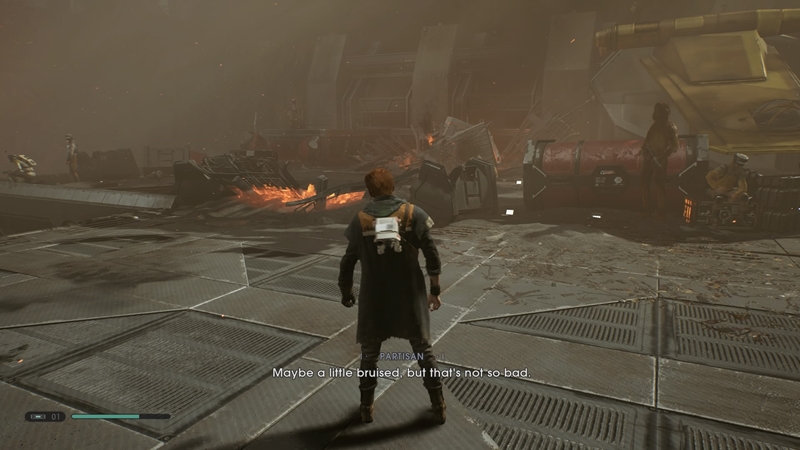 However, you could look at it in another light. Having to find the one right way to your goal AND back to the Mantis means you'll often have to explore various paths, and similar to Darksiders, some abilities aren't given to you at the start. It encourages players to not only revisit previously explored planets once they've attained the relevant Force powers but also to take their time and be patient while exploring all that each level has to offer.

That being said, this stance towards "revisitation" can sometimes push its luck a little too far. For instance, at one point in the game, I had the choice to choose one of two planets to explore. Thinking there was no difference, I opted to start with planet B. However, halfway through I encountered an obstacle that required me to complete planet A first. I had already spent close to an hour exploring B, and so was hardly pleased to be told that A was the one I should have gone to first. Thanks for taking 45 minutes to tell me I had made a wasted trip.

Time to pick a fight 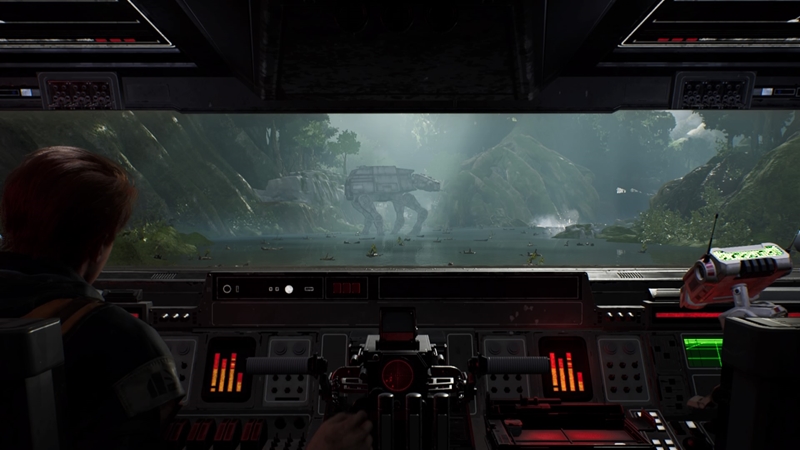 Ok, here's where we really get down and dirty. After all, a Star Wars game review wouldn't feel complete without discussing the fights, would it? To start, there are many combat elements that we're reasonably familiar with from other games such as Sekiro: Shadows Die Twice or Assassin's Creed, such as blocking, parrying and evading. But unlike the previous two, the game doesn't want you to be all stealthy. It encourages straight-up combat (my preferred approach, actually), and the experience is at its most enjoyable when you're facing down an army of Stormtroopers with nothing but your lightsaber and the Force. After all, there's nothing more satisfying than feeling like an invincible, badass warrior of justice.

On that note, Fallen Order does reward proper practice and timing. Well-timed blocks can reflect energy bolts towards blaster-wielding enemies and kill them, or disarm opponents in close combat. The evasion mechanic is reminiscent of the one in Sekiro, and just as useful too, although it does feel a little less fluid than the latter. Still, if you can nail all that down, and chain together the various combos and powers you learn via skill points, let's just say you'll have a real ball cleaving through your foes. That second bit is also why the game only gets good after about two hours since by then you'll have learned a bunch of techniques that make you feel like a proper Jedi Knight. 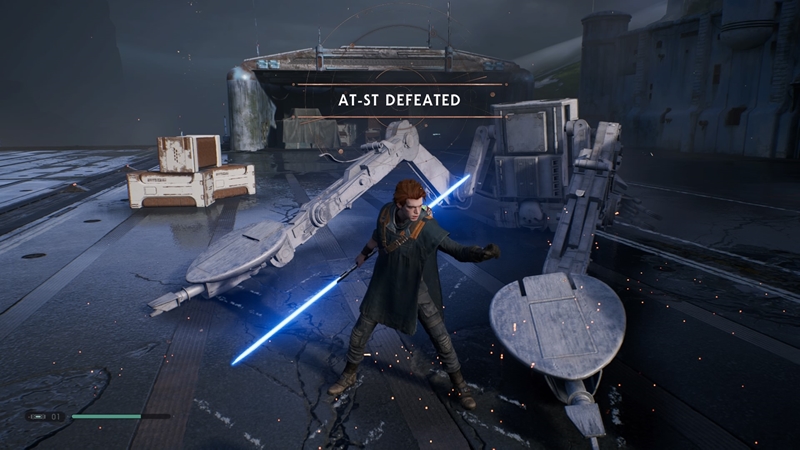 And so, equipped with powerful Force abilities that are quite literally at your fingertips, all you need now is a weapon fit for a Jedi, and to look like one too. Each level has various chests that can reward you with lightsaber add-ons or appearance customisations for the Mantis, BD-1 or Cal himself. Naturally, there are different types of chests too, which once again screams revisitation.

On a side note, remember that whole mess about me spending close to an hour on the "wrong" planet? Admittedly, the experience wasn't completely useless - I actually found a tidy lightsaber addition that was not only good for clearing swarms of enemies, but also added a big bunch of points to my personal cool factor. That being said, I still thought it was largely a waste of time. Hmph.

On the whole, there's no denying that Star Wars: Fallen Order starts off a little slower than some people would like, but then again, most good stories flow at their own pace, don't they? Just like the Force, the game maintains a balance between its various aspects, and I find it does a really good job on that tightrope. None of the elements are overly flashy, and yet they each get their own turn in the spotlight without interruption, making for a highly cohesive, yet engaging game. 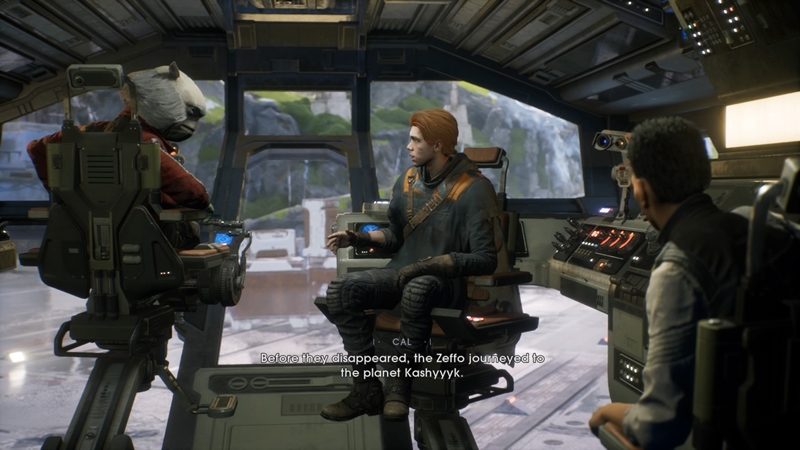 Granted, there may be a few rough edges that I felt the developers should have ironed out beforehand, but otherwise, I'm actually surprised to admit that I had a lot of fun despite my initially poor impression of the game. Of course, all of this is coming from someone who's never really gone beyond waist-deep into Star Wars, but believe me when I say that the game is absolutely worth a shot, regardless of whether you're a curious Padawan or a full-fledged Jedi Master.

With that said, we wish everyone an enjoyable time, and may the Force be with you.