The Centennial Case: A Shijima Story is a gripping murder-mystery that spans a century

The Centennial Case: A Shijima Story is a gripping murder-mystery that spans a century 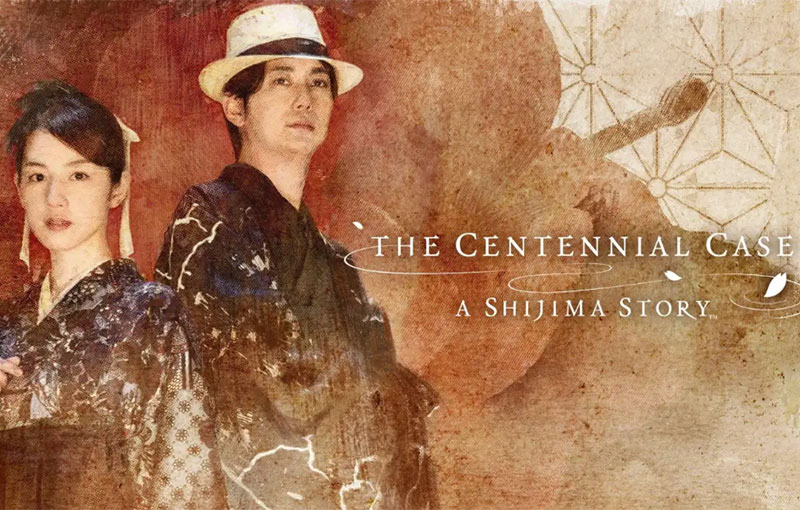 The Centennial Case: A Shijima Story is a full-motion video (FMV) game from Square Enix, taking players on an enthralling adventure that spans a century. With multiple murders to solve, you'll want to put your thinking cap on.

The story is told through gripping live-action footage, brought to life by director Koichiro Ito and cinematographer Yasuhito Tachibana. Featuring a cast that does a commendable job of stepping into the shoes of multiple characters over the course of a century, the plot will have you at the edge of your seat.

You follow a chain of murders that have dogged the Shijima family over the past 100 years, in 1922, 1972, and 2022. There are four murders to solve in total, each comprising an incident phase, a reasoning phase, and a solution phase. You'll be tasked with piecing the clues together, forming hypotheses, and then finally solving the case.

The game is played from the perspective of mystery novelist Haruka Kagami, who finds herself taking on the role of detective. The segments set in the past see Haruka perusing books or reports, reimagining each member of the Shijima family as a new character. In this way, you get well-acquainted with the same few faces, and the cast never has to expand to unwieldy proportions.

In the incident phase of each chapter, the game will automatically surface clues in the lead-up to and aftermath of the murder. Haruka then enters a "cognitive space", often accompanied by Eiji Shijima, the second Shijima son and a scientist who consults on her books. 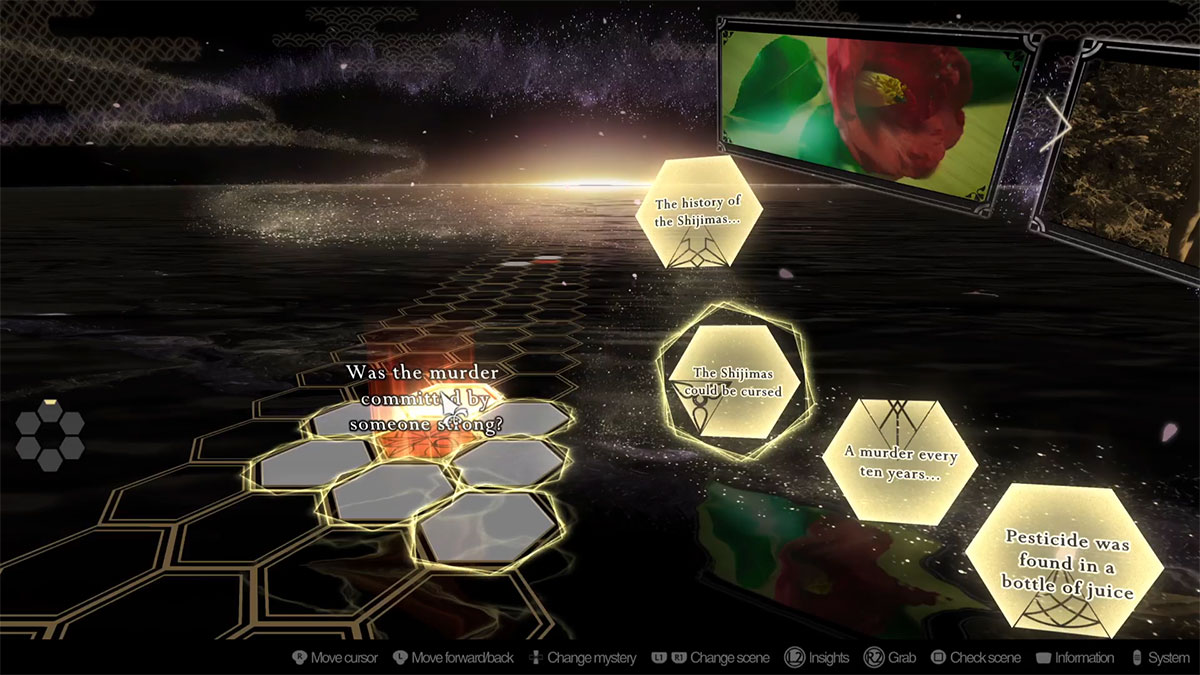 In this space, you're presented with question prompts that you'll need to solve by literally piecing together the relevant clues. The question and clues fit together in a hexagonal grid, and formulating hypotheses for one question opens up additional ones further down the line. However, the game does a lot of hand-holding here, seemingly not trusting players to figure it out for themselves.

Each question has a unique pattern on one or more edges. This pattern can in turn be matched to a corresponding clue, which takes a lot of the mental heavy-lifting out of the equation. In theory, you can simply match the patterns to piece everything together without even bothering to properly parse the questions. 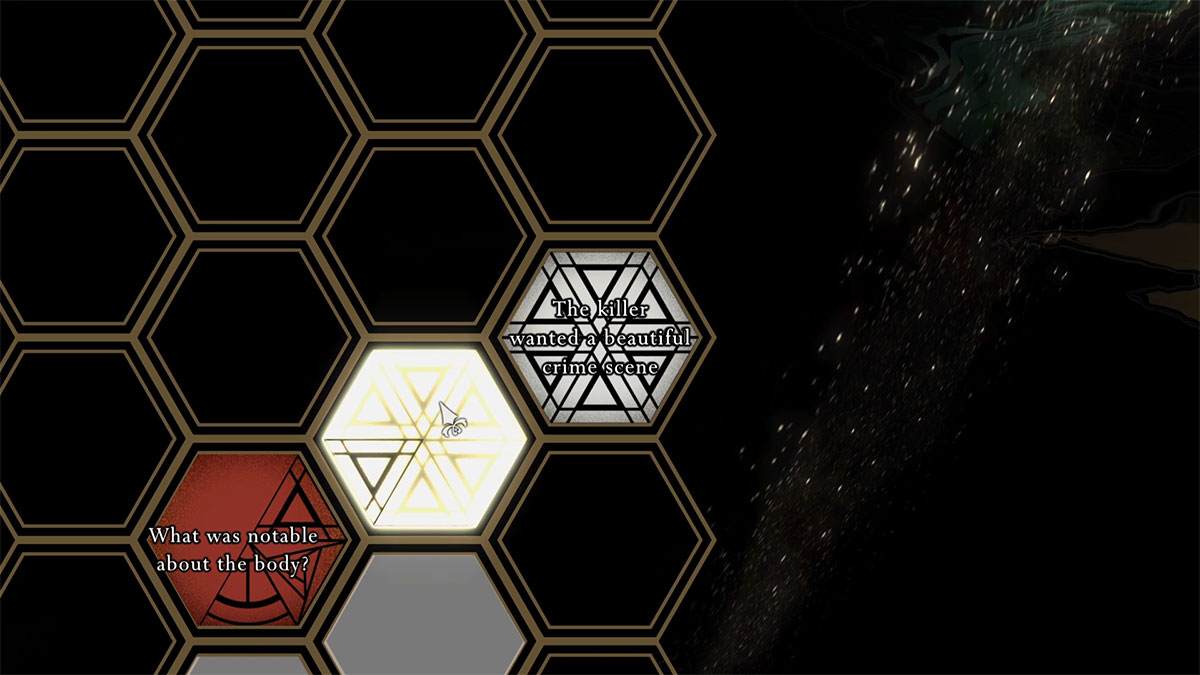 On top of that, not all hypotheses that you arrive at are correct. In fact, several are so ridiculous to the point of being almost laughable. Every hypothesis is also accompanied by a neat little animated cut scene, so you can watch it play out in its full glory, however improbable.

Once that's completed, you'll get to actually confront the murderer. You do this by picking the correct dialogue choices and reasoning to justify your accusation. This is probably the toughest part of the game – it's not immediately clear what the correct choice is, with some of them bordering on the downright bizarre. How was I supposed to know that a water canister and rope were used to make a pendulum?

In addition, the wording of the various options can be a little vague at times, where it's not immediately clear what the difference between each option is. At times, both options felt like they were basically saying the same thing, with only slight wording differences between the two. Fortunately, this only happened occasionally, and most of the choices were fairly logical.

If you choose wrong, the supporting characters do not miss the opportunity to poke holes in your argument, which will suddenly seem immensely stupid. Haruka's show of contrition and mortification is also hilarious, doing an excellent job of passing on some second-hand embarrassment to you. You'll be kicking yourself for not thinking harder and putting her through all that. Pay close attention to every line of dialogue – there are important clues there that can guide your choices.

The production value of the game is also impressive, never feeling overly stilted or cheap. In fact, it felt like I was watching a movie during several sequences. On top of that, the soundtrack changes to fit the time period you're in, a nice touch that adds just that extra bit of immersion. 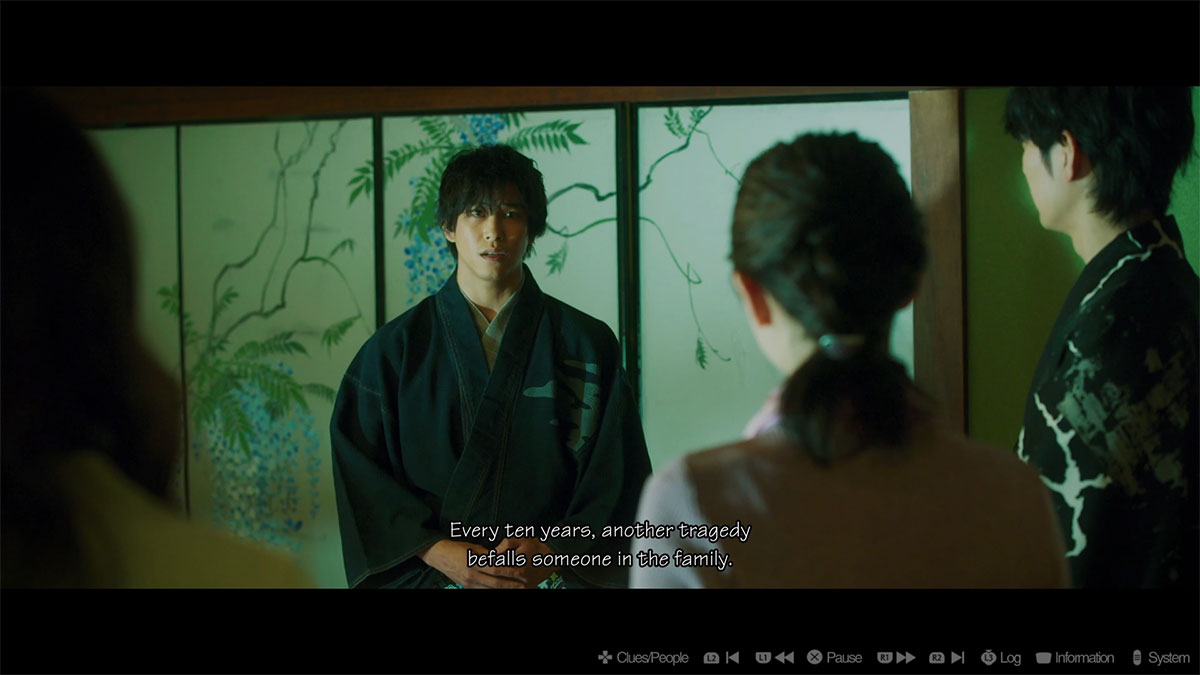 The writing does an excellent job of layering on the intrigue, and I felt genuinely invested in the history of the Shijima family. Were they actually cursed? Or who was the one hunting them? Adding to the air of mystery is the central crux of the story – a fruit that supposedly bestows eternal life. While there's nothing overtly supernatural about the game, this fruit of everlasting youth teases the possibility that there might just be something fantastical going on here.

The Shijima are also a family of doctors, a detail that adds an extra veneer of plausibility to the entire premise. Eiji himself is involved in researching the cellular ageing process and is determined to uncover if his family has actually held the secret to stopping ageing all along.

Obviously, this is not a game for those after some heart-stopping action or riveting gameplay. Instead, it's more like an interactive film or visual novel, designed with amateur sleuths in mind. If you're a fan of detective novels and crime fiction, this will be right up your alley. It's like sitting through a really long movie, but at least the plot is good.

Write a Review
Compare This | Specifications
Great production value and performances from actors
Riveting plot
Immersive soundtrack
Problem-solving veers between too easy and weirdly convoluted
Wording of choices and hypotheses could be better
Plodding gameplay
Our articles may contain affiliate links. If you buy through these links, we may earn a small commission.
Sponsored Links