Spider-Man: Miles Morales gives the young hero a chance to spin his own web 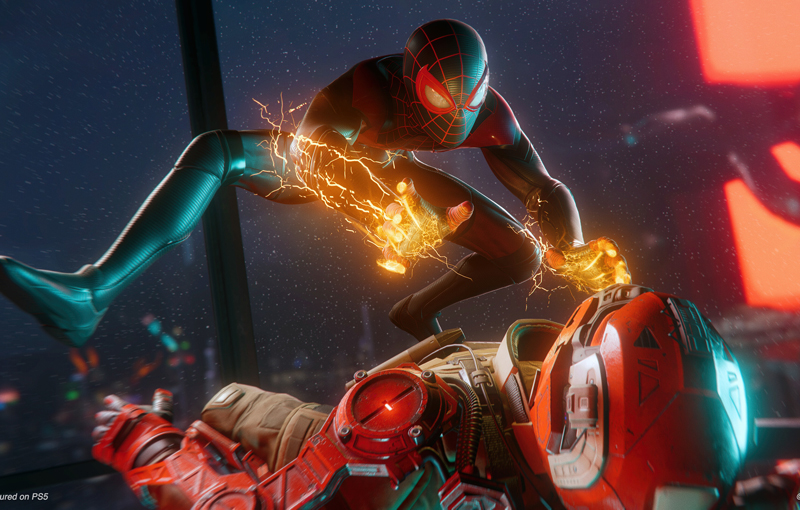 Man, does it feel good to be back in this world again.

2018 gave us a lot of great games - God of War, Red Dead Redemption 2 and Celeste being just a few of its standouts. Though I loved them all, I don’t think I enjoyed simply traversing a game world as much as I did in Marvel’s Spider-Man. That game nailed it. Being able to zip around New York and web up foes provided me with so much joy in 2018, so when developer Insomniac Games announced that a spin-off was on the horizon? I was ecstatic.

Spider-Man: Miles Morales hands over the Spidey-reins to Peter Parker’s protégé, the young teenager who received superpowers during the events of the last game. This isn’t a full-blown sequel, however. It largely features the exact same environments and gameplay mechanics as the first game, using them as a solid foundation to tell a small, focused coming of age story about a boy trying to be a Spider-Man. It's a really good one, too! 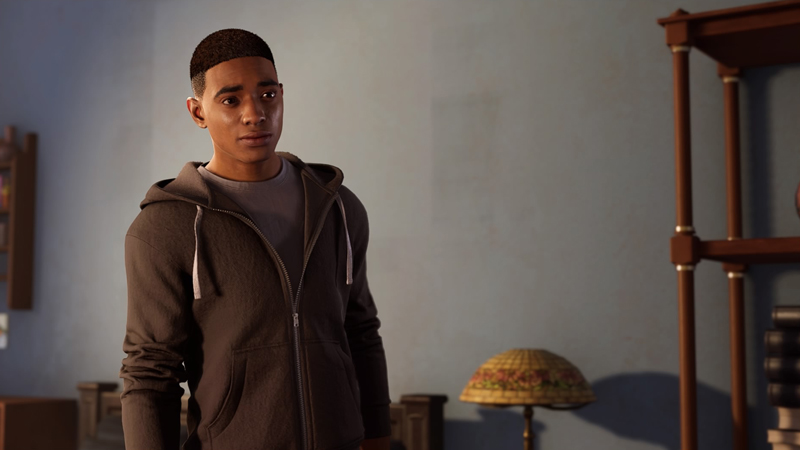 It’s the age-old question that comes up in all superhero stories: when one hero is trying to save their city, why aren’t their friends helping? Spider-Man: Miles Morales elegantly solves this by shipping Peter off to Symkaria, heading off to take pictures for a story Mary Jane is working on. Fortunately, we do get an action-packed opener with the duo working together before that, where they fight to put an escaped supervillain back behind bars - and it contains all the heroics and quickfire one-liners you might expect.

By this point, Miles has grown quite a bit under Peter’s wing. He knows how to swing and how to beat up the baddies, and even has his own adorable Spidey social media account - where he replies to all who thank him for his efforts. Still, when Peter announces his temporary absence, Miles is unsure of whether he can step up to protect his city. That becomes a theme that runs through not only the entire game’s story, but its side quests and even simple interactions with civilians. His endearingly optimistic nature is occasionally hampered by questions like, “Is Peter my mentor or my partner?” or, “What pun would he have made after beating up that bad guy?”

The story that explores all this is rather short, bringing back multiple characters from the previous game like Miles’ mother Rio Morales and Gloria from FEAST. It also fleshes out Miles’ slice of New York with new characters and locations, like his best friend Ganke and new home in Harlem. The cast is almost entirely made out of people of colour too, and that’s just a lovely thing to see in any game. 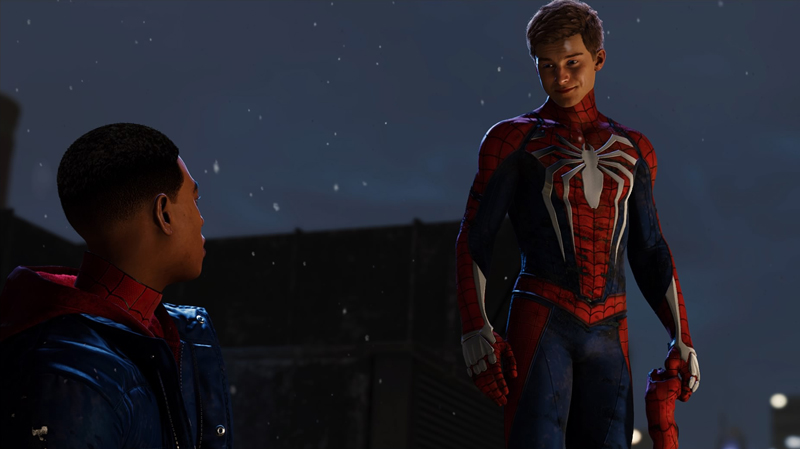 Miles himself is a fantastic protagonist, and any doubts I might have had about him leading his own game evaporated almost instantly. He dances with civilians in the streets, and almost loses his balance when landing on perches. He has so much joy for his new job, and watching him slowly but surely come into his role as New York’s second Spider-Man is a bewitching journey.

It’s not all perfect, of course. I enjoyed the twists and turns of Marvel’s Spider-Man so much more, if only because they were not nearly as predictable as this story ended up being - and much longer, too. I ended up wishing I had more time to spend with Miles’ family and friends, who seemed far too interesting to be shelved after just 12-15 hours of play. It’s still a really fun campaign to play through however, paced well so you spend equal time learning about Miles and stopping New York from crumbling to pieces.

Venom (no, not that Venom) 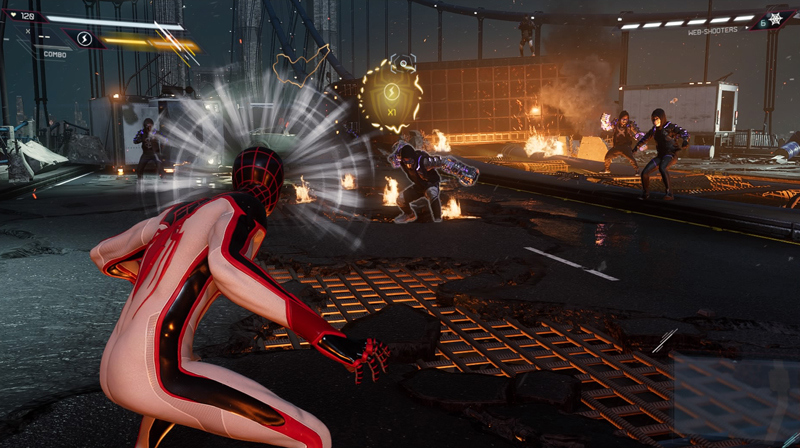 If you enjoyed playing through Marvel’s Spider-Man, good news! You’re basically going to be doing the same stuff again here, with a couple variations. Miles fights just like Peter, except instead of having the latter’s arsenal of gadgets, he only gets four. To make up for this, Miles gets an all-new set of powers that slowly unlock as you play through the story. Combining L1 with different attack buttons allows Miles to pull off a spectacular Venom attack, giving him a burst of electricity that he then slams into someone else for a quick finisher. The Venom meter is also used to replenish your health, and keeping up with both sides of that meter in the most frantic battles is an incredibly satisfying thing to pull off.

Where combat was a rather plain (albeit still chaotic) affair of webs and punches in the previous game, now it’s a stylish dance of electricity and invisibility. Yes, Miles can turn invisible too - an incredibly useful ability in stealth scenarios, which I’ll get to later. On the whole though, combat feels so much more fun here. I’m of the opinion that Marvel’s Spider-Man threw far too many annoying enemy types towards its endgame to keep up with Peter’s rising level of power and gadgetry, but that doesn’t happen here. Sure, there are annoying enemies, but your Venom attacks and gadgets allow you to stay on top of things, to the point that deaths never feel unfair. Stealth returns once again, and it’s much better this time around too. I absolutely hated how in almost every base in the original game, you could only stealth-eliminate the ‘first wave’ of enemies before six more burst out of nowhere to kill you. Combat was an inevitability in every stealth scenario, so why bother with it in the first place? Here however, you can finish off most combat scenarios by simply stealthing through them. Being spotted still brings in reinforcements, but now that feels like a fair punishment. Miles’ invisibility helps a ton too, and it’s available at any time - even when you’re in the heat of battle. Activating invisibility chips away at a slowly-depleting meter, allowing you to walk right up to enemies and take them down unseen or simply escape.

It feels like Insomniac didn't just take this opportunity to make Miles feel unique in combat with these abilities, but to further refine the previous game’s stealth and combat systems while doing so. It’s going to be really hard to go back to playing as Peter now, I’ll tell you that much.

Write a Review
Compare This | Specifications
Tons of great Spider Suits
Improves upon the original game in a lot of ways
Great story with tons of action
Miles is a fantastic protagonist
The campaign is really short
Predictable story
Our articles may contain affiliate links. If you buy through these links, we may earn a small commission.
Sponsored Links