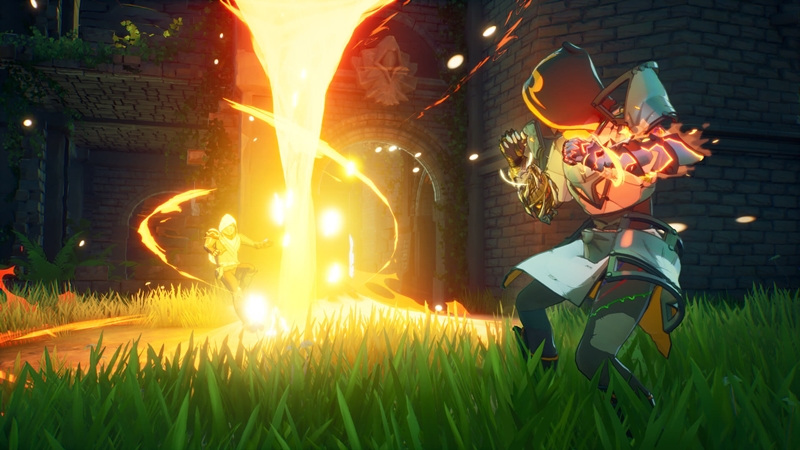 With a "zap", a "boom" and a "pow", a smoking crater now stands where your opponent was just a few moments ago. As you head over to loot their charred remains, you blow the steam off the top of your trusty fire gauntlet, and your lips curl into a smile - there's nothing like a satisfying kill to open the match.

Developed and published by Proletariat, Inc., the magic-slinging battle royale Spellbreak is still pretty much an infant compared to the likes of PUBG and Fortnite. but already it's started to make waves among the battle royale community. After our own playtesting, we feel that it's primarily due to its innovative and refreshingly magical take on the genre, but is that one victory enough to propel it to the big leagues? Let's find out. 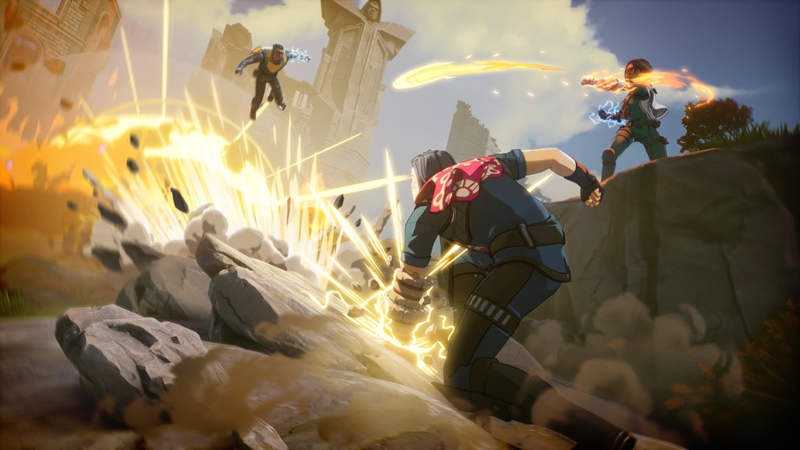 At first glance, I certainly wouldn't blame you for thinking Spellbreak was just Harry Potter-meets-PUBG because I had the exact same impression. I distinctly recall thinking "It's just PUBG with magic instead of guns.", and to be honest, as someone who has never really gotten on the whole battle royale hype train, I wasn't that keen on it. Especially not after the shambling mess that Ubisoft's urban battle royale Hyper Scape turned out to be, and I actually had high hopes for it at the start.

Luckily, this one turned out to be a little different.

When it comes to the general flow of gameplay, the Spellbreak apple doesn't fall far from the tree. You've got a bunch of players on a single large map, a periodically shrinking circle that basically incinerates anyone caught outside, and fast-paced gameplay that forces players to think and formulate strategies on the fly.

However, it's how you fight that really separates Spellbreak from its brethren, and I'm not just talking about it in terms of battle tactics. Your equipment heavily influences the way you play too, and what I will say is that it's done in a very different fashion from other battle royales. You see, instead of having players spawn in and then fight over random weapons and loot caches, Spellbreak already sends you into battle with some equipment of your choice, which affords players some freedom to develop their own preferred playstyles.

Aesthetically, I do concede that Spellbreak doesn't really do anything new. It feels like a more magical, medieval version of Fortnite in terms of graphics, but that's not bad by any means. In fact, I think going for this angle suits it pretty well, especially since it helps the game appeal to younger audiences, and gazing out over a map dotted with floating debris and castle ruins is actually quite spectacular. 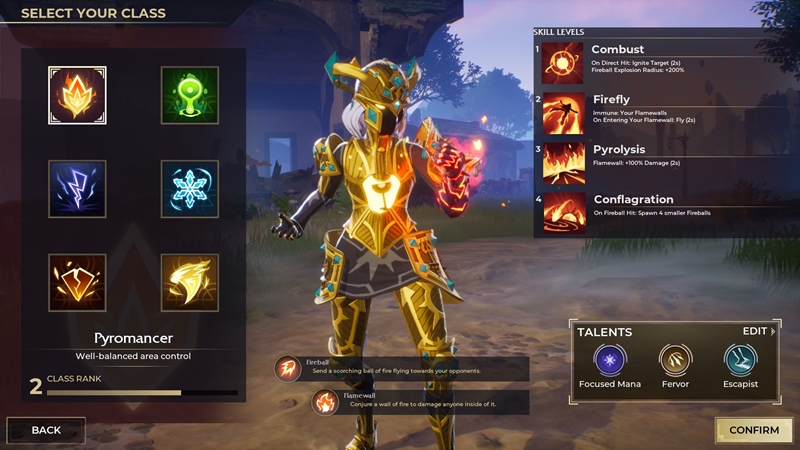 Then again, you could also pick a fireball, a lightning bolt or a cyclone - it all depends on the mood. .

The combat system is undoubtedly my favourite part about Spellbreak, and after testing it myself, it wasn't hard to see why many players have fallen for it. The game essentially lets players make their own "Subway sandwich", except you're using elemental magic as the toppings. Before the match, players select one of six different Classes as their "bread", which determines the primary elements they spawn with into the map. Of course, each of these classes, from Pyromancer to Toxicologist is tailored for a different playstyle, so it all depends on what each individual player wants to focus on. Of course, this doesn't mean that they're eternally shoehorned into one element or the other - you can freely swap elements between matches without penalty, which further allows players to explore and see what fits them best.

Okay, so we've got a few elemental spells, but is that all? Hardly. That's only the beginning, because now it's time to see how you can combine them, and this is where the game's combat system truly shines. The magic in Spellbreak isn't just discrete fireballs, poison clouds, lightning bolts and all that. You can actually use different elements in succession to create deadlier spells, and being able to come up with creative applications for these combos while you're in the middle of a fight makes for extremely exciting gameplay.

One of my favourites is actually the combo they introduce in the tutorial - using a poison cloud first, then shooting a fireball at it, resulting in a noxious explosion that eats away at enemies' health. Yes, it's simple, but heck if it isn't effective. Couple that with your Talents (passive boosts) and the various Scrolls you find around the map that can increase Mind, Body, and Spirit (these are basically the game's way of referring to your attack speed, health, and magical energy reserves) and you could very well be a one-man nuclear warhead by the end of the match. 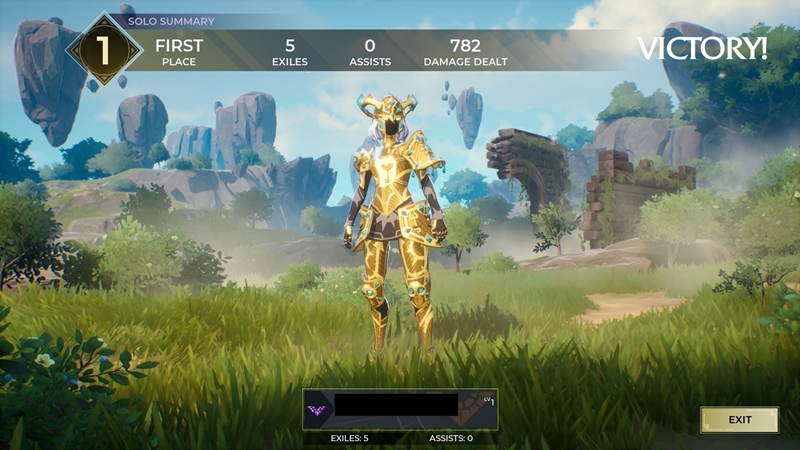 Also, you might now be wondering what "Skill Levels" are. Don't worry; these aren't pegged to your class rank for that particular element - it's nothing quite so unfair. In Spellbreak, as each player moves to a smaller and smaller circle over the course of the match, Skill Levels for their chosen element are added on, allowing them access to more and more powerful spells as time progresses, with interesting bonus effects to boot. I actually found this a really cool addition, since it means that even the most novice players will still have a chance to outwit experienced ones if they play their spells right in the late game.

Anyway, where the game's formula really comes together is when you realise you have to juggle all of the diversity and elemental considerations alongside usual battle royale tactics. The presence of spells in place of guns means that you can even manipulate the surrounding terrain to your advantage (eg. using a flame wall to direct your opponent into a kill corridor), meaning you'll have to really stay on your toes to come out on top. With regards to creating cover, you should be able to create shields with higher-ranked Spells and Talents, but those are temporary, and I really appreciate that you can't just create entire fortresses out of thin air like a certain other battle royale, since I feel it takes away from the tactical aspect of the genre by a fair margin. And that's putting it nicely.

Anyway, if you're concerned that you'll just get beaten hands-down by the veterans in your first few games, don't be - I actually managed to win the very first match I played in (as shown above!), and given that I'm not very good with battle royales in the first place, I think it should be pretty manageable for you guys! 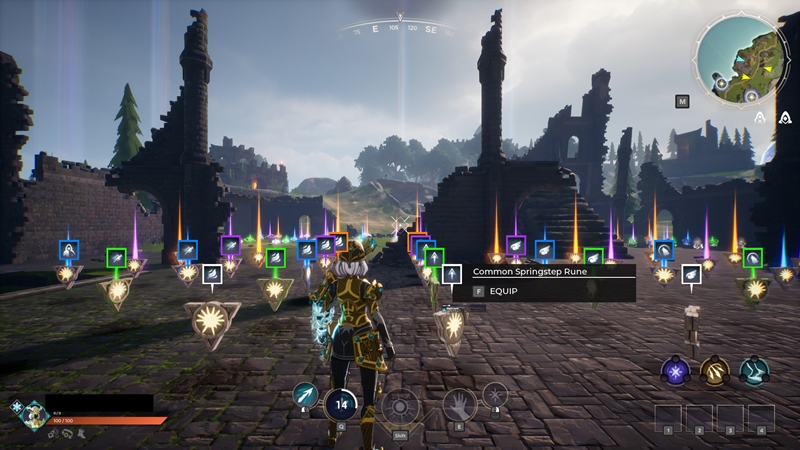 But like any form of magic, there are bound to be "misfires" somewhere, and Spellbreak is no exception. Although it is performing exceptionally well for such a "young" game, there are some areas that we feel the developers could still improve on in future updates.

Fortunately, the first of these two potholes isn't actually a very big one, but as a game that prides itself on its flashy magical aesthetics, it's still worth highlighting for improvement. As you might have guessed, we're talking about the cosmetics, especially those that players can buy from the shop - they're kind of dull and generally uninteresting.

Like many other modern games, such as Fall Guys, Spellbreak's shop runs on a weekly rotation system, offering only a meagre handful of cosmetics for sale at any given time. The lack of variety is already bad enough, but what really hammers the nail further into this coffin is that even the "paid" skins and accessories don't exactly make you go "woah".

They're more likely to make you go "meh" than anything, making any of the paid items a pretty hard sell considering players will need to fork out real money for them. In fact, I don't think I would have forked out the cash for the Founders' Pack if it wasn't already included in our game code. 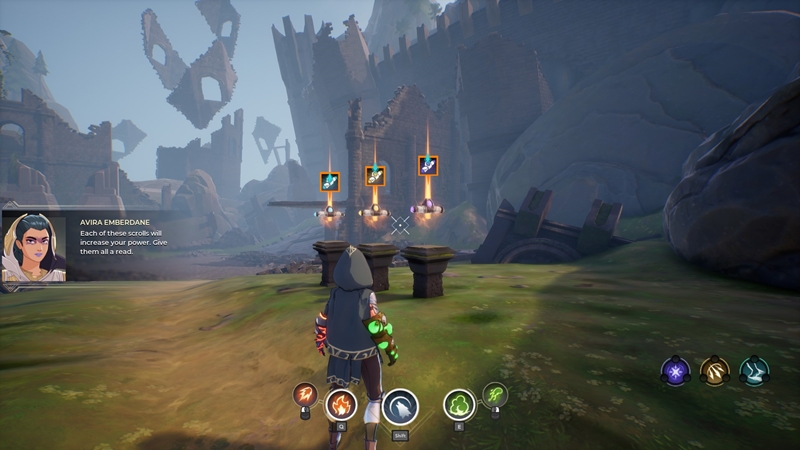 As for the second pothole, well, let's just say that Spellbreak's impressive diversity is in a way, its greatest obstacle too. When I first booted up the game and ran through the tutorial, I couldn't help but be impressed with all the potential elemental combos I could do, as well as Classes, Talents, Scrolls, Runes, Gauntlets, Skill Levels, so on and so forth. Who wouldn't be excited after seeing all that? There are just so many interesting things to explore and nuances to pick up on.

And that's the issue in itself. Although its diversity is one fo the game's strongest points, it's also extremely daunting if you're picking up the game for the very first time. I mean, if I tossed you a Practice Mode screen that looked like the image at the very start of this section I think it'd be a little unnerving too. In essence, there's a little too much to properly get your head around everything at one go, and it doesn't help that the tutorial is bundled into one big package either. I think I'd have had a way easier time if the sections were spread out to cover each topic individually.

Last but not least, there is still something to be said about Spellbreak being a battle royale at its core - it doesn't offer much beyond that. There's no PvE mode (bar the Practice island), practically zero story content and you don't even see the lady from the tutorial around elsewhere. Honestly, I think the folks at Proletariat have got something interesting going on here conceptually, but whether they pursue it further, like how Fortnite has their "Save the World" gig is anybody's guess. I know I'd really like them to.

An interesting battle royale in 2020?! 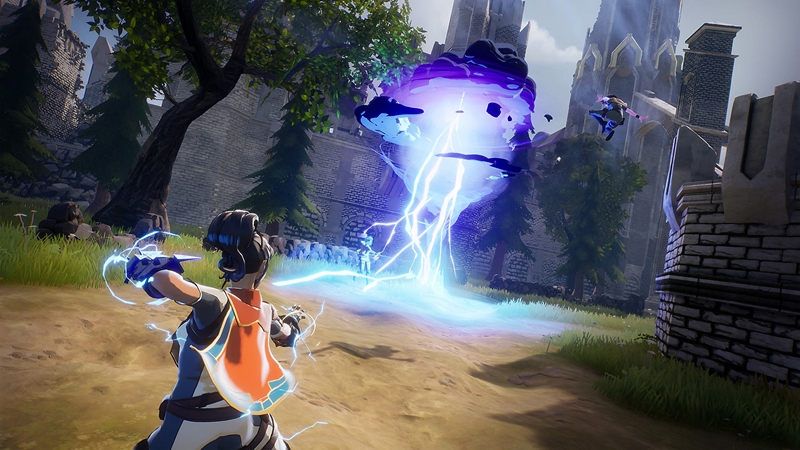 My overall verdict? I'm still quite sold on this game. Spellbreak may be utilising one of the most overused gaming formats within the past three years, but I feel the sheer diversity and unpredictability of its combat system far outshines its flaws.

I also quite like that the devs have implemented features that allow inexperienced players to at least have a fighting chance against more experienced ones - it makes the game much more playable when you're starting out as a new player. As for the cosmetics, let's just say that Proletariat, Inc. will really have to buck up on that if they want to get the most out of that flashy magical aesthetic.

But for all intents and purposes, Spellbreak is an excellent game, and I still can't believe I'm saying this about a battle royale. Life does love its surprises, doesn't it?

Write a Review
Offers a good getaway from the usual gun-centric battle royale
Combat system is extremely well thought out and diverse
Immense freedom for players to develop and explore their own styles
Elemental combos are easy to understand and fun to explore
Hehe...acid cloud go boom.
Doesn't offer much beyond the PvP
Cosmetics, even paid ones are pretty mediocre
Diversity can be a little daunting at the start
Sponsored Links