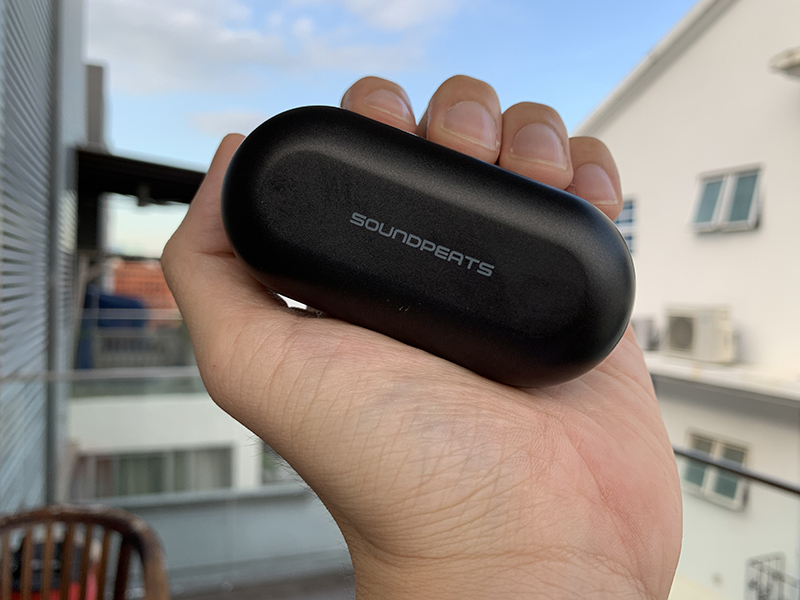 The true wireless earbuds market is awash with alternative brands that claim to be affordable while delivering great sound, but it’s difficult to tell which ones hold up to the promise.

The Soundpeats TruEngine 2, however, is intriguing because of what the company claims to be the “world’s first” dual-driver true wireless set-up. With two drivers in each ear, the earbuds can, in theory at least, produce better sound across the board, from deep bass to vibrant trebles.

And it claims to deliver all of that for just S$118 – a remarkably low price for a spec sheet that checks a lot of the right boxes.

How does the TruEngine 2 hold up in daily use?

When it comes to hardware design, it's safe to say that the TruEngine 2 doesn't push any envelopes.

The blocky black charging case is as plain as they come, sporting a nondescript look with rounded corners and a subtle Soundpeats logo stamped on top. Accessories in the box are packed in a similar minimalist fashion: a tiny box packs in a short USB-C cable, and a small bag of two additional ear fins and silicone tips in varying sizes. 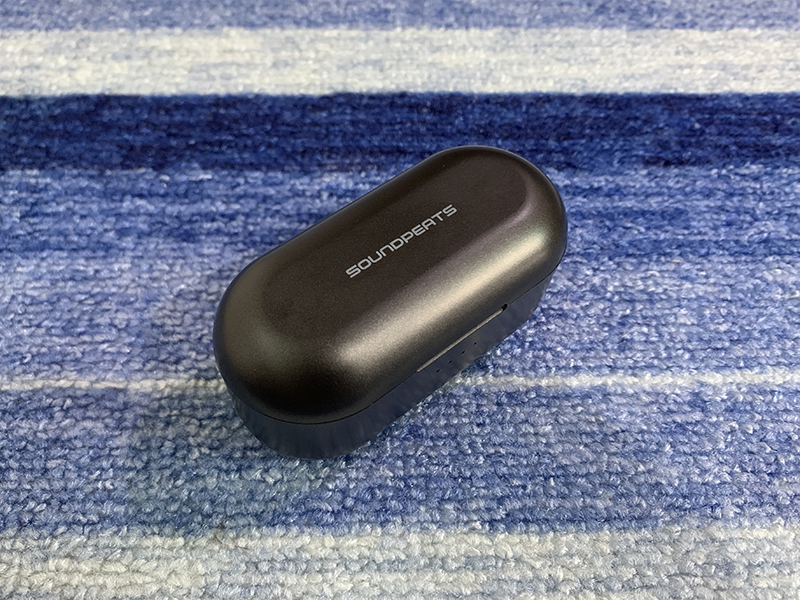 However, the case has a nice weighty heft and is smooth to the touch, giving it a more premium feel in the hand. There’s none of that cheap plasticky finish that plagues many lower-cost gadgets.

Part of the reason for its bulk is the massive battery that Soundpeats has packed into the unit, as well as wireless charging capability. The TruEngine 2 earbuds have a working time of six to seven hours, and the case is capable of replenishing its juice up to 3.5 times. This gives it a whopping total battery life of more than 24 hours.

When you pop open the lid, four LED lights at the front of the case lights up to indicate its remaining charge. The left-most and right-most light also lights up when you place the earbuds back into the case, providing reassurance that the earbuds are indeed charging. 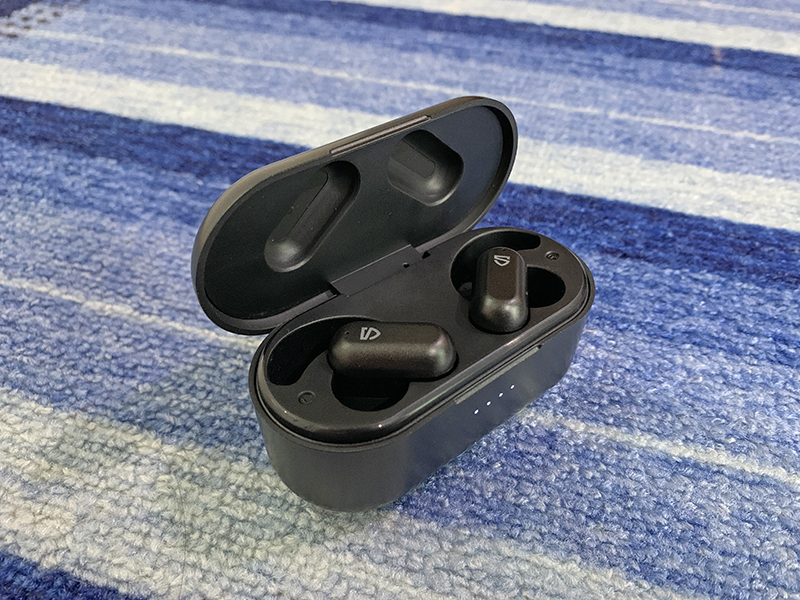 This is important because I found that the little golden pins on the earbuds occasionally did not connect properly, and I ended up with a single dead earbud the next day. With the LED indicator, I was able to make sure both were charging by wiggling both earbuds back and forth a little in their case. I hope that this is a one-off issue that plagues only my review unit.

Lifting the earbuds out of the case immediately kicks off the pairing process, which was smooth and painless. In just a few seconds, the TruEngine 2 was all paired up and ready to go. A little stylized “S” on both earbuds lit up in white for an added flair, but thankfully turns off after a while so it doesn’t attract any undue attention. This “S” also lights up in red when you pop the earbuds back into the case, a nice little touch that appeals to my inner RGB fanatic. 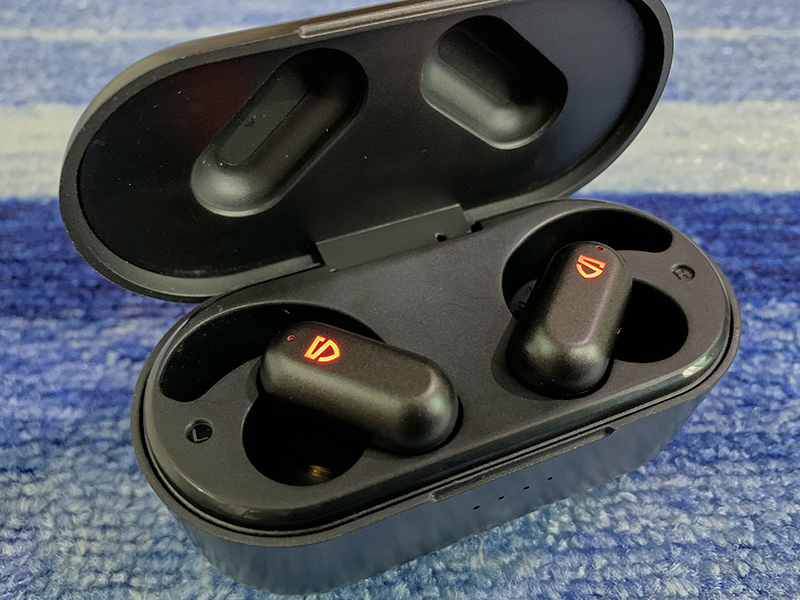 What’s missing here is a dedicated app that could have kicked the experience up a notch. Additional software features such as the equaliser found in Sennheiser’s Smart Control app, which we tested along with the Momentum True Wireless, would have been an excellent value-add. But let’s not forget that we’re dealing with a gadget that costs only S$118, so I won't fault it here too much.

The TruEngine 2 felt snug and comfortable inside my ears, thanks in part to the ear fins, or wings, as you might call them. True wireless earbuds are a small and light form factor, and are prone to falling out of your ears, so having wings is a feature that I find sorely missing in many other more premium models. Admittedly, the earbuds don’t look as sleek with two pointy rubber wings sticking out of them, but they’re not that noticeable once they’re in your ear, and I would go for function over form any day of the week.

Putting them on can be a bit tricky thanks to the ear fins, and you might have to twist it a little back and forth until they snap in, but once they’re in, their weight is seemingly perfect. I never felt like they were too heavy or too light, which is sometimes the case with other true wireless earbuds.

I'm generally not a fan of touch controls as they are often finicky to use and I'm afraid the TruEngine 2 has much of the same problems that plagues other headphones with touch controls. It’s near impossible to get the touch you need reliably when your ears are completely in your blind spot, resulting in a lot of erroneous taps. There is almost no way to get this right, and I wish all audio brands will just go with physical buttons on their true wireless models.

All that aside, the most interesting bit about the TruEngine 2 is its use of dual-drivers – a feature which the company is keen to talk up and showcase. In fact, the inner casing of both ear buds is made of transparent plastic, so there’s no way you can miss the two shiny drivers peeking out of them. 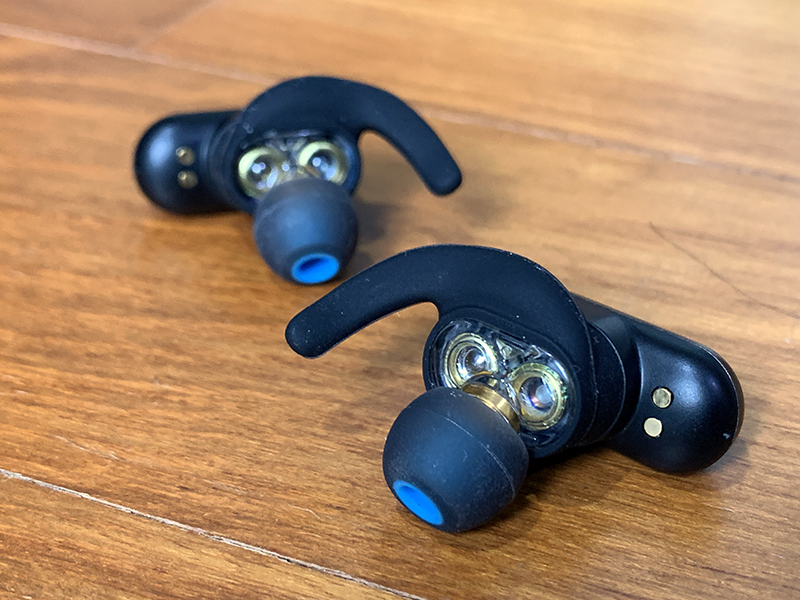 In addition, Soundpeats’ proprietary Crossover circuit design claims to be able to separate audio signals in different frequencies and deliver the highs and the lows through the separate drivers. The end result is “stereo sound with strong bass, accurate mids, and clear treble”, proclaims the company’s marketing materials. This design also enables each individual earbud to deliver stereo sound, so you can use just one side without losing any part of the music.

But the proof lies in the pudding – even the most impressive hardware in the world may not result in world-class performance.

At first listen, it seems like that the TruEngine 2 has no problem delivering on its promise of reproducing clearly defined sound across the board, just as Soundpeats claims. Music came through as more balanced than expected, and the soundstage was wide enough for me to pick up the layers and positioning of various instruments even on a moderately complex piece like Joe Hisaishi’s “Summer – from Kikujiro”.

However, it soon became obvious that I might have simply set my expectations too low. The more I listened, the more the music started to sound muddy, no matter the genre. I hit play on Kodaline’s “Brother” – which contains several recurring verses of harmonising vocals – and was immediately disappointed at how compressed the song sounded through the TruEngine 2. The bass was muddy, the highs weak, and I could hear no distinction between the different vocals.

The context in which you use the earbuds do matter. When I’m working out at the gym, for example, I’m concerned less about the sound quality and more about the fit and comfort and the reliability of the connection. The TruEngine 2 does perform admirably in this respect, and it doesn’t matter that I can’t hear all the nuances of an EDM song like Armin and Super8 & Tab’s new single “Leka”, pumping out heart-thumbing bass action while I break out a sweat.

The earbuds also perform suitably well when you’re trying to catch up on TV shows on your commute, with no noticeable lag between the action on the screen and the sound that’s delivered. Try anything interactive like gaming, however, and the lag is too obvious for a pleasant experience.

Call quality on true wireless earbuds is usually a miss more than a hit, but the TruEngine 2 was rather serviceable in this respect. I could carry a conversation on the earbuds even though the other party complained that I sounded too far away and was a tad muffled. I wouldn’t rely on it for any business-critical calls, but it should be good enough for a quick catch-up with family and friends. 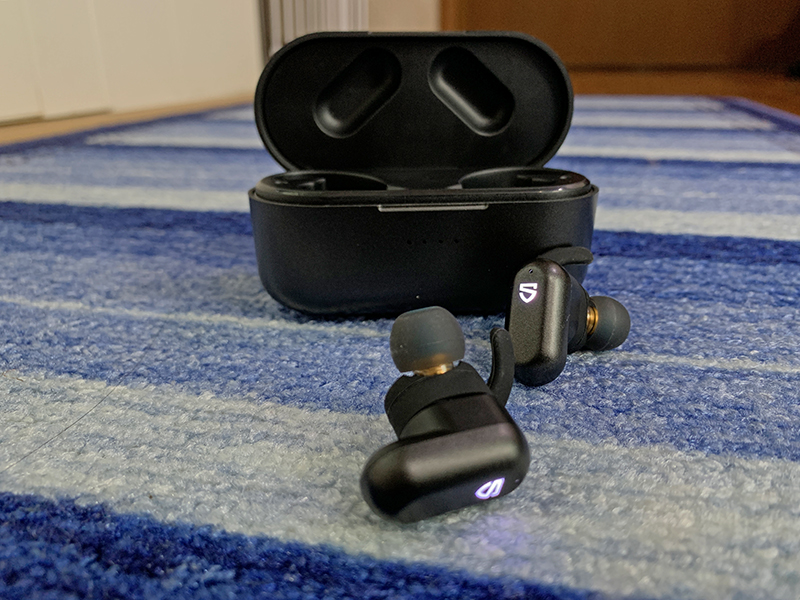 If I were to buy a pair of true wireless earbuds today, the TruEngine 2 would have my very serious attention. The painless pairing and comfortable fit combined with a seamless connection thanks to Bluetooth 5.0 completes the true wireless trinity of basic rock-solid functionality.

Throw in an excellent battery life, a surprisingly decent sound quality, and a very reasonable price point, and the earbuds become a very compelling purchase.

In the process of completing this review, I often switched back and forth between the TruEngine 2 and the Sennheiser Momentum True Wireless – a personal set which I use as my daily driver. It’s a tedious exercise that allowed me to do point-blank comparisons in quick succession.

But you’re not going to do that in real life, and therein lies the key advantage of the TruEngine 2: you’re paying a pretty good price for “pretty good”.

And for most people, that’s good enough.

If you feel the Soundpeats TruEngine 2 is just right for you, stocks are available at these online stores; some of which may run seasonal offers:- Lazada, Shopee and Qoo10.

Write a Review
Compare This | Specifications
Very affordable
Good performance relative to price
Wireless charging
Large battery capacity
Uninspired overall design
Janky touch controls
Can sound muddy and compressed on some tracks
Our articles may contain affiliate links. If you buy through these links, we may earn a small commission.
Sponsored Links