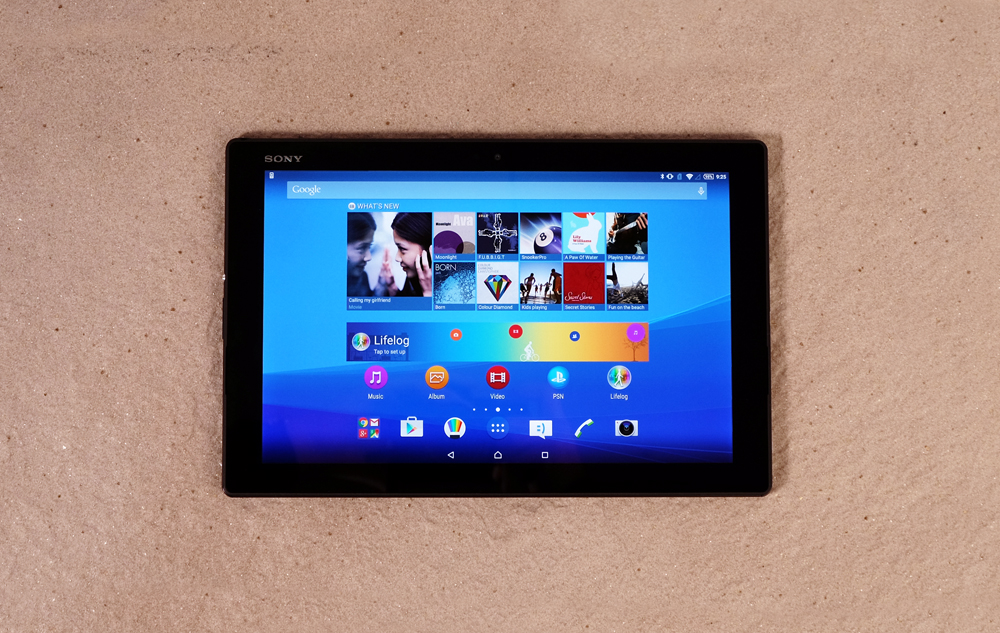 After skipping a generation (the Z3 tablet only came in a compact 8-inch size), Sony is re-introducing its 10-inch tablet flagship in the form of the Z4 tablet. A direct successor to last year's Z2 tablet, the Z4 once again sports a waterproof build, and a light and ultra thin build. It has also been upgraded with a QHD 2,560 x 1,600-pixel resolution display and a Qualcomm Snapdragon 810 octa-core processor.

If you're familiar with any of the products in Sony's Xperia Z range you already know what the Z4 looks like. Sony is once again utilizing its minimalist OmniBalance design, and at first glance there's really nothing to separate it from the Z2 tablet. But hey, if it ain't broke, why fix it, right? The Z4 tablet is still one of the best-engineered tablets on the market, and is both ultra-thin at just 6.1mm and ultra-light at a mere 393g. That's the same thickness as Apple's iPad Air 2, and significantly lighter. 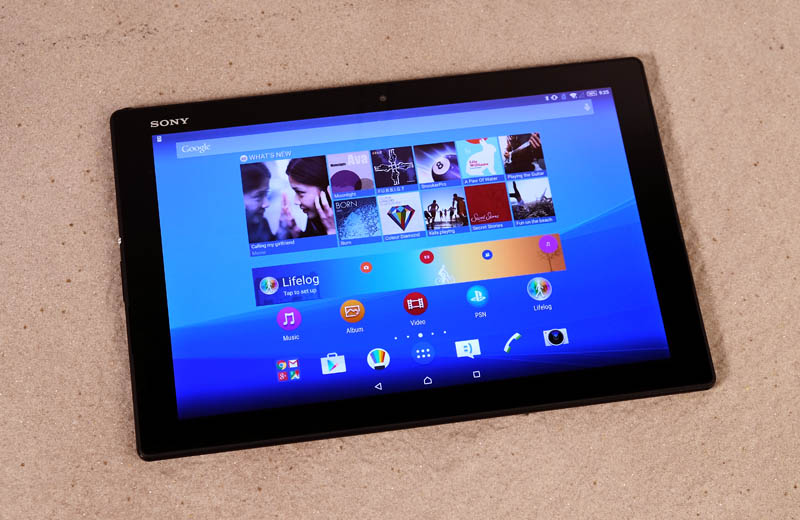 Like the Z2 tablet, the Z4's rounded corners and slightly curved edges help it fit comfortably in your palms when holding it, and the smooth plastic back has a subtly textured finish that provides some grip support. The corners of the tablet have metal caps to provide stability, and despite its overall light weight, the Z4 tablet feels durable and dense, although it is prone to some slight flexing if you try to bend it diagonally. 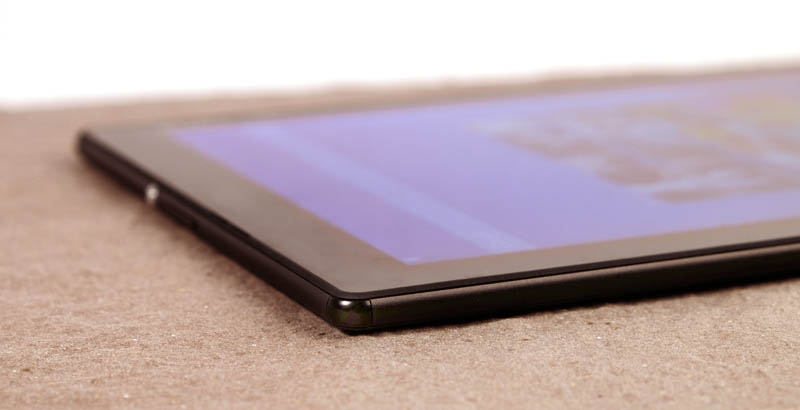 As with all of Sony's Z gadgets, the Z4 tablet is waterproof, and rated IP68, meaning it's impervious to dust and can survive full immersion in water of up to 1.5 meters for 30 minutes. The waterproof build has also evolved and now includes a capless USB port in addition to the capless headphone port introduced on the Z2 tablet, removing the need for a fiddly port cover like previous Z tablets. The only port cover you'll find is on the top edge, covering the SIM and microSD card slots, which you'll rarely need to access anyway. On the left edge, you'll find the power button and volume rocker.

Like the Z2 Tablet, both black and white color options are available. 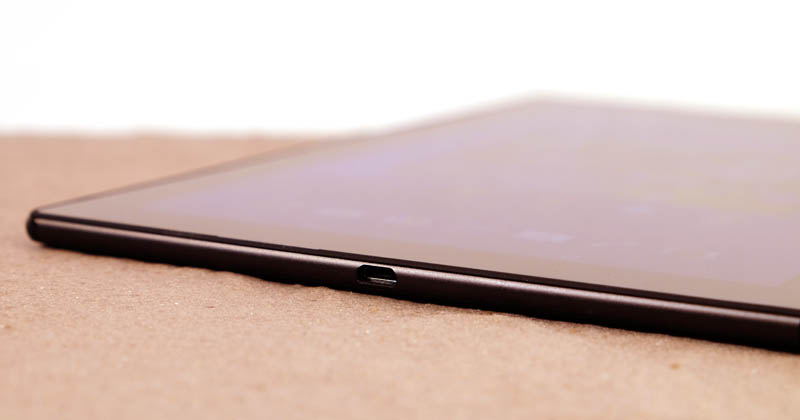 To keep up with the likes of Samsung's Galaxy Tab S 10.5, the Z4 Tablet has been given a new QHD 2,560 x 1,600-pixel resolution display, which translates to 299 pixels per inch. Clarity on the Z4 Tablet is top notch, although honestly it was hard to spot the difference between it and the 264ppi Apple iPad Air 2.

Like its predecessors, the IPS LCD display boasts Sony's Live Color LED and Triluminous display tech, although we found the colors to be a bit too vivid for our liking (there's an option in the Settings menu for a more neutral display). Viewing angles were good, and contrast was also decent, although not as deep as the Samsung Galaxy Tab S 10.5's Super AMOLED display. 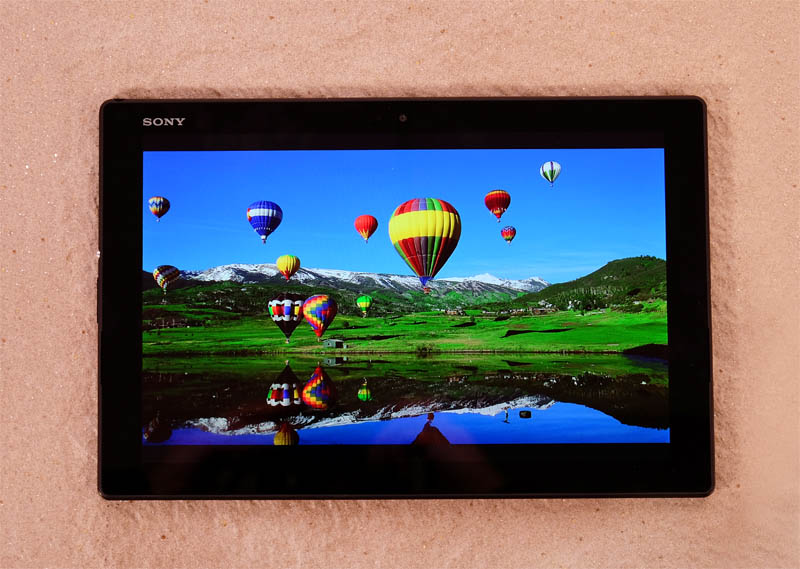 While the screen-size remains the same as last year's model, the bezels surrounding the display are slightly thinner. It's not a big change, and the bezels are still a bit thicker than we'd like, which, combined with its minimalist design still make the tablet look a bit like a digital photo frame, but it's a nice improvement nonetheless.

One of the stand out features on the Z4 Tablet is its front-facing stereo speakers. Anyone with an iPad will know the annoyance of one-sided audio when watching a video without headphones plugged in, but you'll have no such problems with the Z4. The volume can be cranked up nice and loud, although it starts to get a bit harsh at maximum volume. Don't expect a ton of bass, especially from a tablet this thin, but the speakers are still way ahead of other tablet offerings. 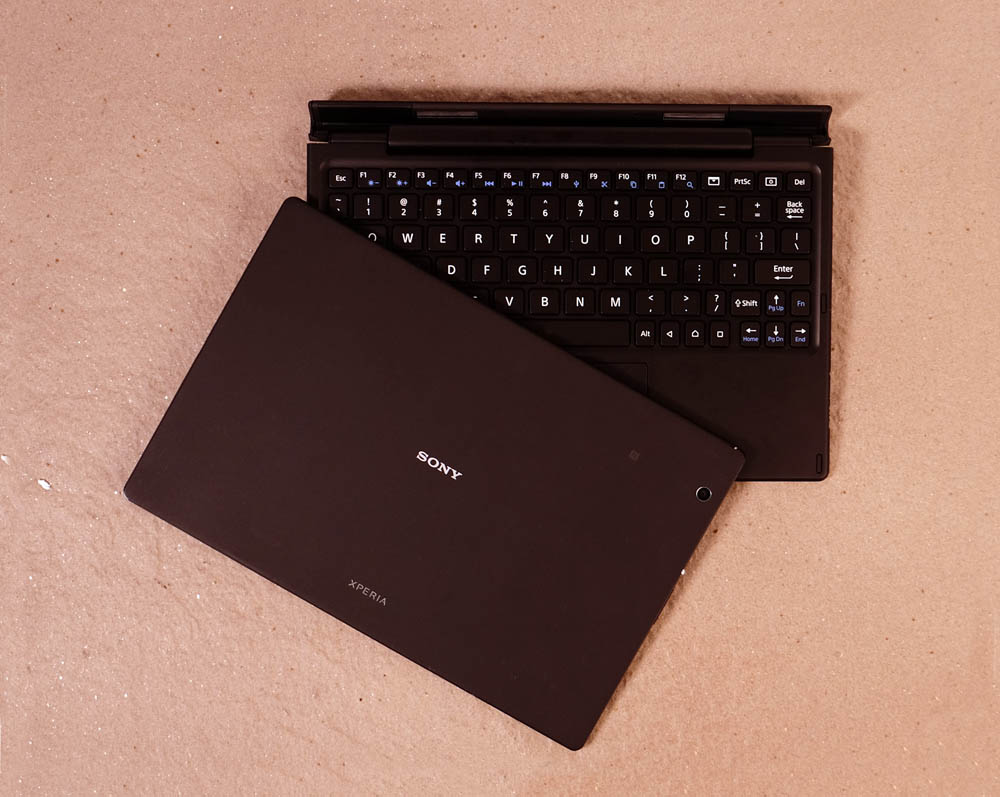 The Z4 Tablet runs on Android 5.0 Lollipop and also includes Sony's usual pre-installed apps and cross-platform features. Our favorite is still PS4 Remote Play, which lets you hook up a DualShock 4 controller via Bluetooth and stream games directly from your Playstation 4 to your Z4 Tablet.

A new addition to Sony's accessory lineup is the BKB50 Bluetooth Keyboard, which is sold separately for a jaw-dropping S$268. What do you get for that price? Actually, not all that much. The keyboard is just as thin and light as the tablet, and complements it nicely. Combined, the whole setup is just 758g, and about 11mm thick, but that's about all you get. There are no extra ports or an additional battery inside it (the micro-USB port on it is for charging its own battery only), and the keys aren't backlit either. It's also worth noting that the keyboard isn't dust or waterproof, so don't take a shower with it.

To connect the keyboard, you just slot the tablet into a receptacle at the top and pair via Bluetooth. Once the keyboard is connected, the Z4 Tablet's OS starts looking a bit more like a laptop OS. You get a small task bar that's sort of similar to the Windows Start menu at the bottom left of the screen, and a bunch of shortcut icons next to it that display your most frequently used apps. The keyboard has a trackpad too, so you also get a little cursor on screen, and there are a bunch of shortcut buttons on the keyboard, as well as buttons for the standard Android soft keys, so you don't have to touch the display at all - although often it's simply faster and easier to just use the touchscreen. 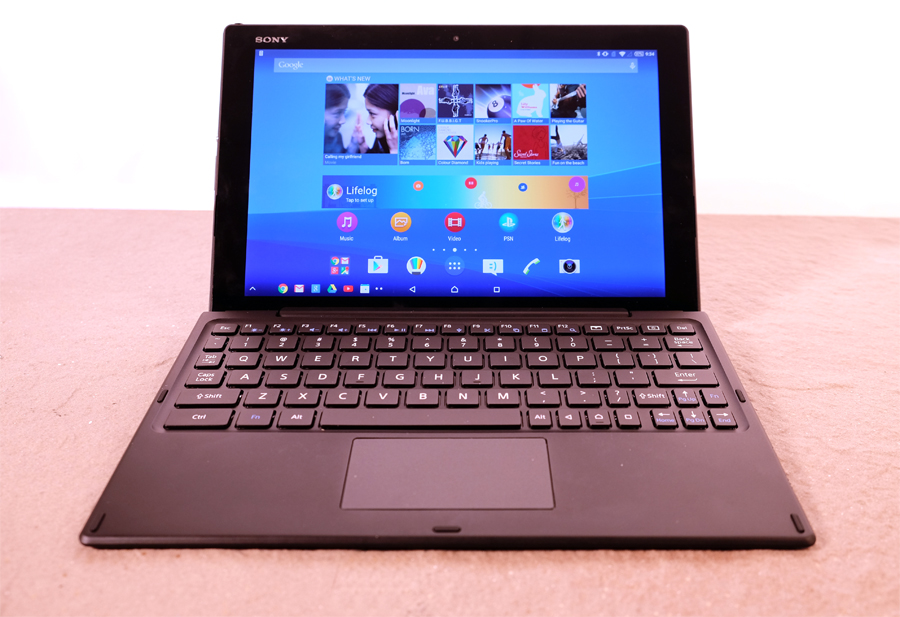 Like previous Xperia tablets, you get a fairly decent Office suite pre-installed, and internal storage on the Z4 tablet has been doubled to 32GB which is plenty to work with. The microSD card slot can also provide up to 128GB of additional storage.

In usage, the keyboard is a bit of a mixed bag. A cleverly designed hinge that is slightly longer than the tablet elevates the keyboard into a more natural typing position when in use, and the keys themselves are fairly firm with a decent amount of travel, but the whole thing just feels cramped and awkwardly laid out. The right Shift key is small and crammed in with the arrow keys, and even worse, the backspace and delete keys are tiny and located right next to the power button, which really shouldn't be a key at all - a separate power button away from the keys or off on the side of the keyboard would definitely be a better solution. There's also some noticeable flexing in the middle of the keyboard. 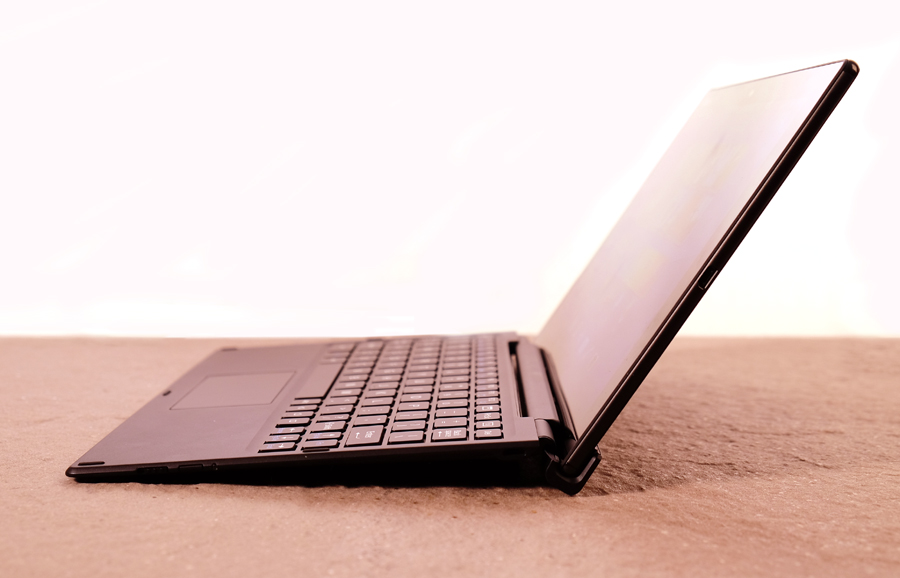 The trackpad fares a little better. The click is nice and firm, and tracking is generally responsive and accurate. You can even two-finger scroll with it. 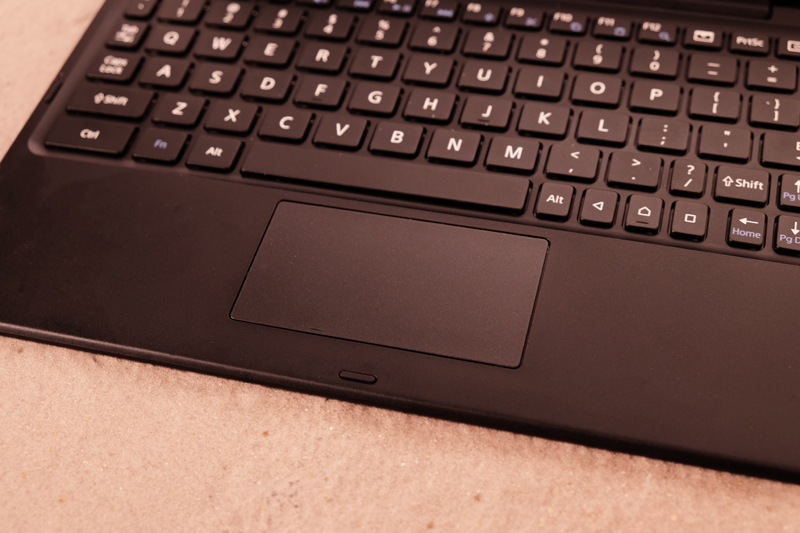 You might think that for any 10-inch laptop, you're going to have to settle for a cramped typing experience, but considering that 10 and 11 inch netbooks were able to deliver a better experience, we really expected more from Sony. More recently, the ASUS Transformer Pad TF701T has a better docking keyboard, which is even included in the box, and has a built in additional battery, an SD card reader and an additional on-board USB 3.0 port. The only downside is that it's much bulkier.

Overall, while the keyboard is a nice addition and gives the Z4 tablet some extra functionality as a productivity device, it's too expensive for what you get. Even if you opt for the cheaper Wi-Fi version of the Z4 (S$888), if you get the BKB50, you're looking at paying S$1,156 total for a 10-inch Android laptop. If productivity is your main usage goal, you're probably better off with a Microsoft Surface 3 and Type Cover 2 for S$947.

Alternatively, if you're just looking for a Bluetooth keyboard for your Z4 Tablet, there are cheaper options out there, including Sony's own BKB10 keyboard, which is a more affordable S$110.