The Biggest, Fastest and Slimmest Phablet Yet

The phablet war is heating up as more phone vendors race to outdo each other. We've seen devices beyond the 6-inch screen size from the likes of Huawei (the 6.1-inch Ascend Mate) and Samsung (the 6.3-inch Galaxy Mega with LTE).

Not wanting to be left out, Sony unveiled the 6.44-inch Xperia Z Ultra at Mobile Expo Asia in June. Its intention is obvious - to be the biggest and meanest device in its class. To-date, we've no concrete data on the up-take and interest of these giant phones (or is it a tablet?), but clearly almost every major brand wants a piece of this pie. So what does Sony bring to the table with the Xperia Z Ultra? Let's take a quick look at its specs, and how it compares with the other two 6-inch rivals:

(Note: We've done a hands-on article with the Xperia Z Ultra, so we'll summarize the key points here instead of going into great length again.)

On a general note, Sony did not deviate much from the design language that its Xperia flagship devices are known for - OmiBalance. As a quick refresher, it includes two durable tempered glass panels on the front and back of the device with a skeleton frame made of tough glass fibre polyamide. It also features the signature aluminum power button on the right side. All these add up to give the Xperia Z Ultra a fine, elegant look. The original 5-inch Xperia Z was the first to sport this design signature while the Xperia Tablet Z took on a slight deviation with a matte black rear. 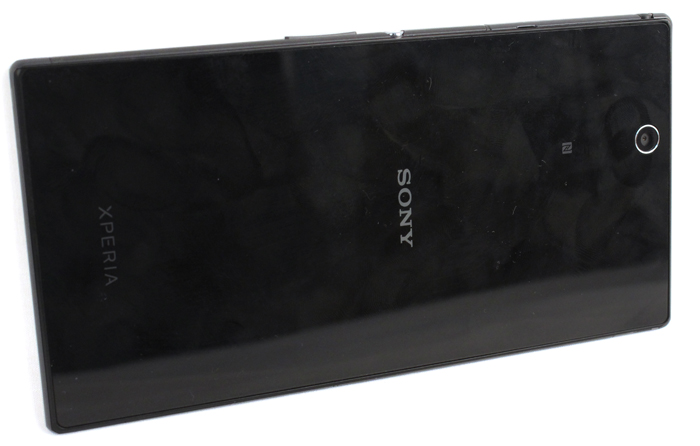 While the large full HD screen is a strong draw factor, the main highlight of its design is its super sleek 6.5mm thin profile. In fact, the Xperia Z Ultra is the world's slimmest Full-HD smartphone and it is only bested by the 6.18mm Huawei Ascend P6 (thought it's 'only' a 4.7-inch device). The engineering that went behind to fit a 6.44-inch screen (which is also the largest smartphone display at the moment) onto such a thin body is truly a work of genius. Its immediate rivals, the Samsung Galaxy Mega with LTE and Huaiwe Ascend Mate, are thicker at 8.0mm and 9,9mm respectively. Of course the thin form factor has its own shortcomings like a less than ideal battery life as you'll see on the following page. The super slim Xperia Tablet Z is no different in this regard as its battery life was also one of its sore points despite a sexy svelte 6.9mm frame. 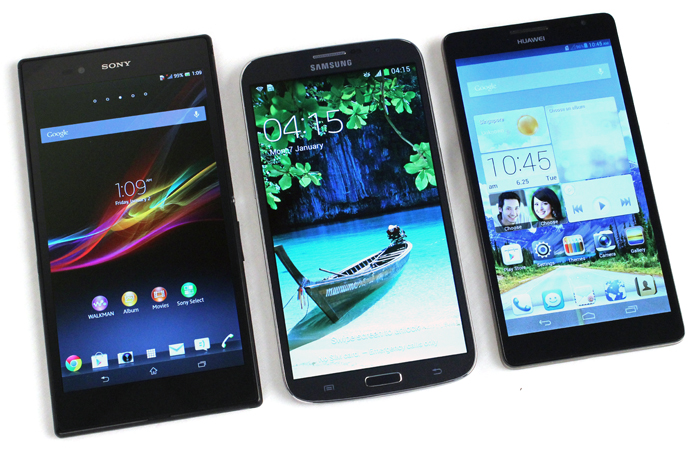 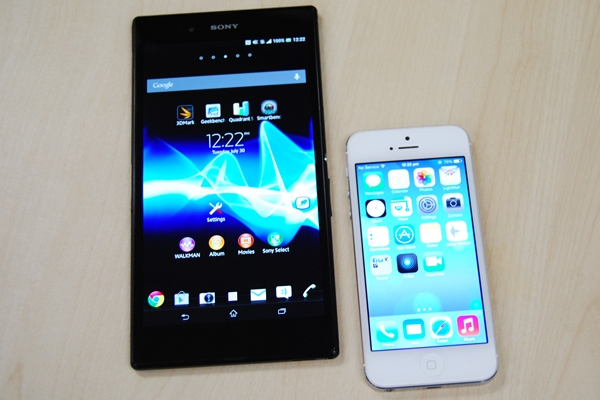 Deciphering those codes, the Xperia Z Ultra is not only protected against dust and low pressure jets of water from all directions, it is also able to stay immersed under 1.5m of freshwater for up to 30 minutes.

As with the water-resistant devices mentioned here, you have to ensure that all ports and covers are firmly closed. If you've noticed, the 3.5mm audio output jack on the Xperia Z Ultra is left exposed unlike that on the Xperia Z. Why is that so?

In an interview with Calcum MacDougall, head of Xperia Marketing at Sony Mobile, MacDougall said that the company has received feedback from consumers that it is troublesome to remove the cover of the headphone jack every time they need to plug in their earphones. Therefore, the design team improved the waterproofing technology and incorporated it in the Xperia Z Ultra that didn't require audio jack cover to be sealed.

Note that the Sony Xperia Z Ultra is internationally available in both 3G and 4G LTE enabled editions. In Singapore, the retail stocks brought in will only be the 4G LTE variant. However for the purpose of this review, Sony has provided us the 3G model for testing. Apart from the data connectivity throughput support, there's no other difference between both variants.

The Xperia Z Ultra sports a 6.44-inch TFT display with a full HD resolution of 1,920 x 1,080 pixels. This is in line with most of the Android flagship devices such as the ASUS PadFone Infinity, HTC One, LG Optimus G Pro, Samsung Galaxy S4 and the Xperia Z. The only difference is that the display size is very much larger, hence the pixel density is lower at 344ppi, but that's still a tad higher than the 4-inch iPhone 5 (326ppi). The 6-inch rivals are obviously outclassed; the Galaxy Mega with LTE has a pixel density of 233ppi (6.3-inch, 720p), and the Ascend Mate comes in at 241ppi (6.1-inch, 720p).

While Sony still uses the same kind of TFT LCD display construction, the Xperia Z Ultra is nothing like the older Xperia devices, particularly the Xperia Z. If you recall, the chief criticism on the display of the Xperia Z / ZL is the "whitewashed" effect and poor viewing angles. Does the Xperia Z Ultra suffer the same fate? Fortunately, it doesn't thanks to the adoption of new display technologies that originated from its TV line-up - Triluminos screen technology and the X-Reality display processing engine.

In a nutshell, the Triluminos screen enables the display to show a wider range (about 50%) of colors, hence images look more natural and richer compared to conventional LCDs. X Reality, on the other hand, is an image processor engine that enhances contrast, adds saturation, sharpness and reduce noise in images and videos. In addition, it analyzes multimedia content and reproduces 'lacking' pixels for a sharper viewing experience. Below are two videos that will show you how both technologies work and their benefits:

In reality, the integration of Triluminos Display for Mobile and X-Reality for Mobile translate to a better viewing experience on the Xperia Z Ultra. We no longer see the "whitewashed" effect, and colors indeed look more vivid. 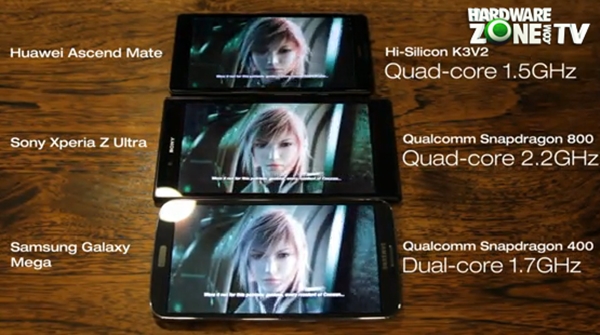 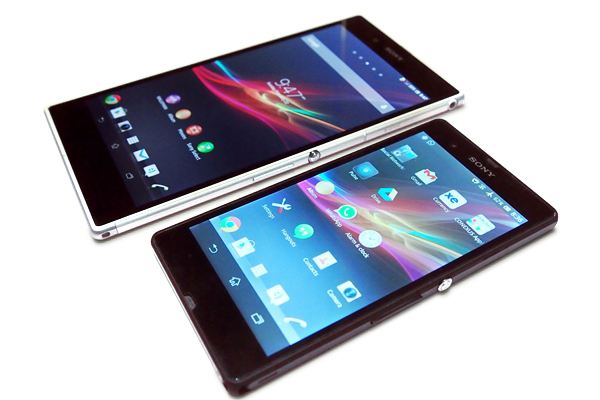 Like its recent flagship devices, the Xperia Z Ultra runs an almost stock Android user interface with some servings of Sony's minor tweaks. It joins the likes of recent Samsung's mobile devices, HTC Butterfly S and the Huawei Ascend P6 to come with Android 4.2.2 Jelly Bean out of the box.

Sony recently announced that the Xperia Z Ultra is one of the six mobile devices in its portfolio to be getting the Android 4.3 upgrade although no timeline has been given. Since Android 4.3 is just an incremental update, there is nothing much that you are missing out on. You get quick settings, lock screen widgets and Day Dream on the device except for PhotoSphere. 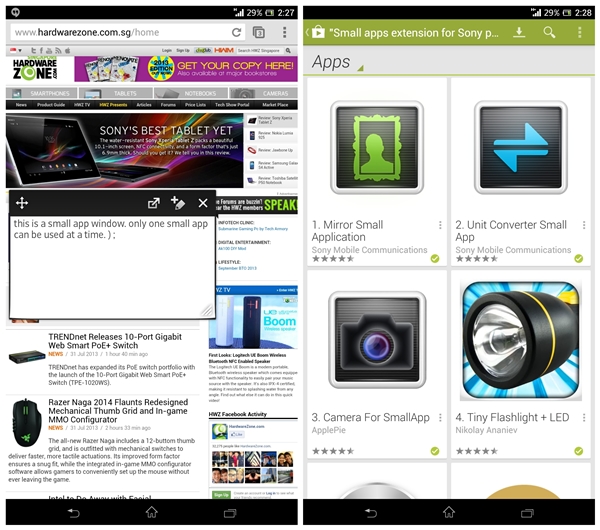 First seen on the Xperia Tablet S, Small Apps is Sony's take on multitasking. It enables you to open a small app window (not all, selected apps only) while allowing you to continue using the main app that you are in. The feature can be found in a number of Sony's mobile devices such as the Xperia Z, Xperia SP and the Xperia Tablet Z.

Take the screenshot above as a scenario example: You are browsing the HardwareZone website and decide to jot down some notes. You tap on the Recent Apps button and a row of icons will appear at the bottom of the screen. You can preset six of your most frequently used small apps there for faster access. Alternatively, you can tap on the arrow on the left to access the small apps. A "+" sign on the top right corner will present you two options:

It's a pity that only one small app can be used at a time. Samsung's Popup Play and Multiple Windows, and LG's QSlide allow you to open at least two apps simultaneously which make full use of the large displays.

On a more positive note, Sony released the SDK for Small Apps for developers to code more third party small apps for its Xperia devices. Therefore, it is possible that given some time, the variety of small apps will grow to cater to different needs of the consumers. 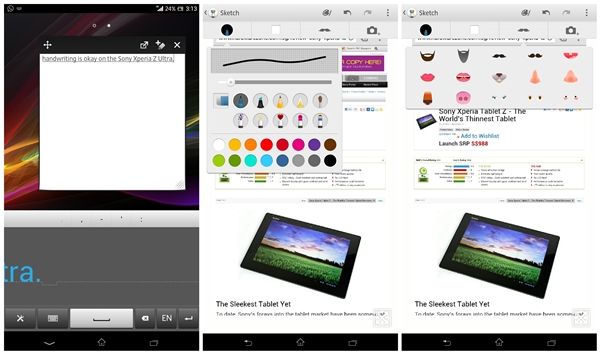 Besides integrating technologies from its Bravia TVs, Sony also made great improvements in the responsiveness of the display. By eliminating a layer of air in the construction, Sony is able to bring the touch panel closer to the display. In addition, the sensor layer is now integrated on the lens, making the display more responsive.

Unlike the Samsung Galaxy Note series, Sony does not require you to use a specific stylus on the Xperia Z Ultra. As the display is highly responsive, you can use your finger, pencil or any stylus to start writing. According to Sony, the device comes with handwriting recognition that optically scan and convert your handwritten notes into text. During our trials, we found the handwriting recognition to be pretty accurate, and the huge display estate provides ample space for you to doodle.

The phone has a dedicated app called Active Clip which functions like Samsung's S Note app and LG's QuickMemo. Active Clip enables you to take a screen of whatever you are viewing, and gives you options to customize or personalize it. For example, you can sketch notes with different stationery (marker, highlighter, pencil, brush, pen), animations and even add pictures. To see it in action, check out the video below:

One of the key features that 5.5-inch and larger mobile devices (phablets) tout is the one-handed operation. In most cases, the one-handed operation makes it easier to carry out common actions (dial keypad, the QWERTY keyboard and lock screen) by shifting them to either side of the screen depending on whether the user is left or right-handed.

However, we were unable to find the one-handed support feature on the Xperia Z Ultra. Reaching out to Sony Mobile Singapore for a comment on this matter confirmed that the 3G edition of the device doesn't yet have this support, but it would be made available through an upcoming software update. Fortunately, the LTE edition of the device has this support out of the box. So locals preparing to buy the Xperia Z Ultra should have no issues.