Like the HTC Butterfly and LG Optimus G, the Sony Xperia Z is part of the 5-inch crowd, one that's outfitted with Qualcomm Snapdragon S4 Pro quad-core processors.

To find out how the Xperia Z stands amongst its peers, we use the Quadrant test as a benchmark. The test evaluates CPU, memory, I/O and 3D graphics of Android devices. In this comparison, we pit the device against LG Optimus G, HTC Butterfly and Galaxy S III LTE. 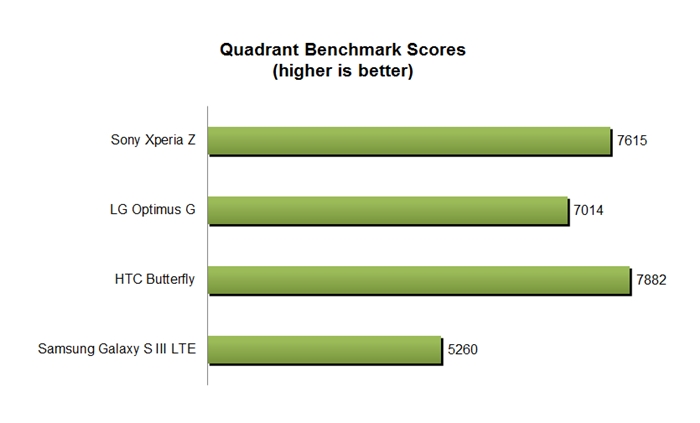 With all three phones (Xperia Z, Optimus G, Butterfly) equipped with the same Qualcomm Snapdragon S4 quad-core 1.5GHz processor, 2GB of RAM, and Adreno 320 GPU, it isn't that surprising to see the Xperia Z scoring an acceptable 7615, a score that's just slightly behind HTC Butterfly's. In comparison, the Galaxy S III's last-gen Exynos quad-core chip has finally showed its age with a lower score of 5260.

Number crunching aside, we were impressed by the speed of operation on the Xperia Z. A combination of Android 4.1 Jelly Bean, Qualcomm Snapdragon S4 Pro quad-core processor and its near vanilla OS makes the experience on the Xperia Z a buttery smooth one with no lags in performance or transitions.

The Sony Xperia Z is equipped with a whopping 13-megapixel rear camera with f/2.4 aperture. While levels of clarity and details were adequate (though we were hoping for the noise reduction engine to be less aggressive), the colors came out slightly too whitewashed for our liking. Compared to the LG Optimus G's test outcome, the sample photo was significantly less warm and carried a overtly blue tinge. 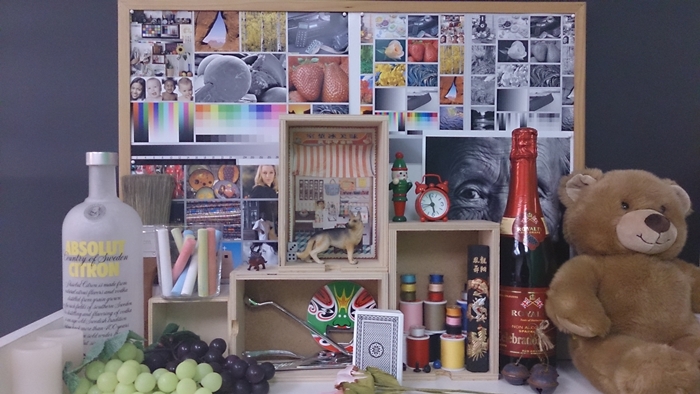 The Sony Xperia Z comes with a clear 1920 x 1080p 5-inch display equipped with Sony Mobile's Engine 2, one that works to tweak appearance of photos and videos on the device. The display seems to pale slightly in comparison with the awesome screen on the HTC Butterfly, but on its own, it does its job pretty well. One thing we note, however, is that excessive back-lighting on the Xperia Z does make the screen look a tad too 'whitewashed' for our liking.

For multimedia storage woes, the Xperia Z comes with 16GB built-in memory and a microSD card slot, which allows you to upsize the memory size by an additional 32GB. Unfortunately, the device doesn't come with any Dropbox cloud storage tie-ins, something that we have found to be included on recent HTC and Samsung Android mobile devices. 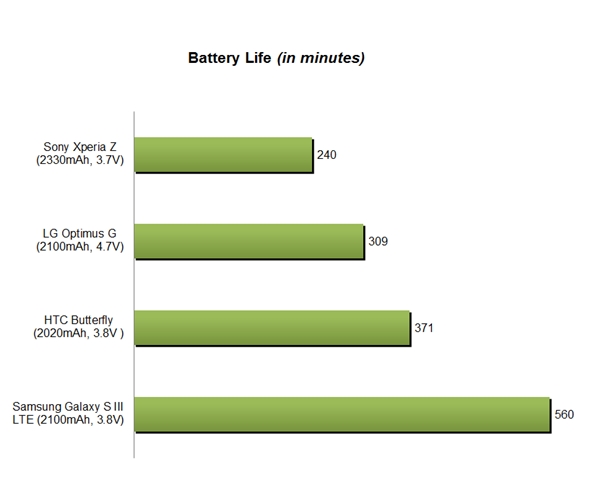 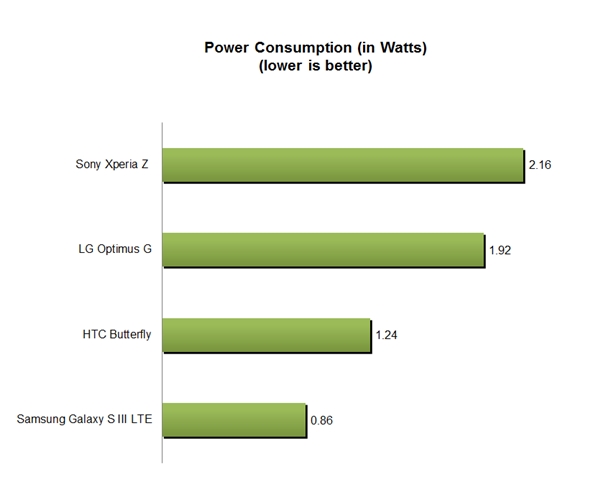 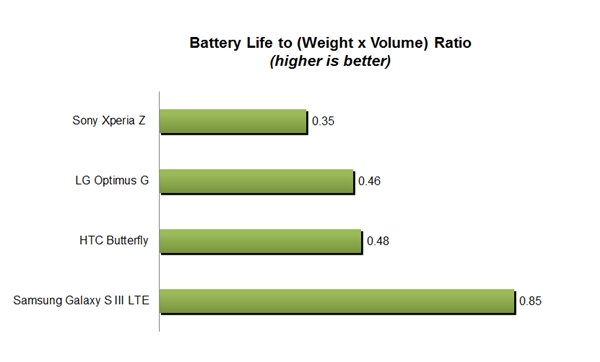 Armed with a full HD display and a quad-core processor, it is quite likely that the Xperia Z will run out of juice pretty fast. Unfortunately, our worries were realized. Putting the device through our test (with the Mobile BRAVIA Engine 2 off but brightness turned up to the maximum), the phone managed to only last a paltry four hours. In comparison, using the same test metrics, the HTC Butterfly lasted slightly over six hours. Even the latter's score is a far cry from Samsung Galaxy S III LTE's outstanding close-to-ten hours battery life. Nonetheless, the results are even more disheartening given that the Xperia Z comes with the biggest battery capacity out of the four devices.

Due to its physical dimensions and weight, it is the heaviest out of the four. As such, the Xperia Z ended up last in the Portability Index where each device is assessed on its ability to balance battery mileage with its size and weight. Once again, both LG Optimus G and the HTC Butterfly ousted the Sony Xperia Z.

Putting the phone through a daily grind (texting, internet browsing, calls and messaging), the Xperia Z could last throughout a working day comfortably. The caveat is that you have to select a lower level of brightness or choose the option to adapt to lighting conditions. While using the phone at medium to maximum brightness, the battery drops fairly quickly and we also realized that the back of the phone heats up very fast as well. Of course, it would be wise to enable any of the power management modes that Sony has provided with their software. 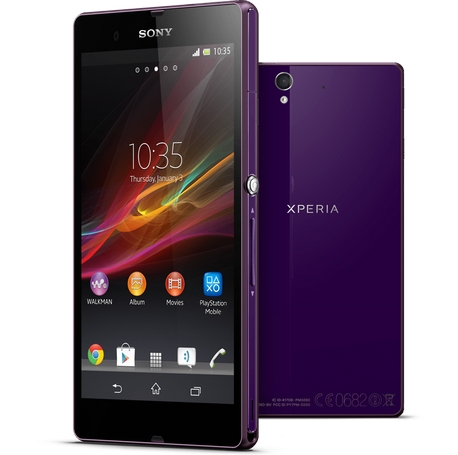 The Sony Xperia Z might very well be the best Sony Mobile phone thus far - powerful with a speedy quad-core Snapdragon processor, solid build quality, angular design and a competent 5-inch display. Of course, this is topped with LTE and NFC connectivity. This puts it on par with an existing and growing pool of LTE-equipped devices. Coupled with the growing LTE presence in Singapore, this gives the Xperia Z an extra edge ahead of its closer competitors, including the HTC Butterfly. More importantly, the Xperia Z is what we can finally call a heartening effort to break into the Android market, given its previous lackluster efforts.

While it's not a must-have feature, the Sony Xperia Z's hardiness is further accentuated by its dust and water resistant body. To add on, Sony uses a combination of tempered glass and anti-shatter film to boost the scratch resistant properties and durability of the glass panels against wear and tear. While its a huge fingerprint magnet, it does a good job of protecting the phone from external factors.

The major downside is of course, in its meager battery life, an eternal point of contention for smartphones with increasingly bigger and bigger screens. Compared to the rest of the devices tested in this review, it fared fairly poorly at four hours on our strenuous battery test. Fortunately, with some power saving tips and profiles, you could get the phone to last for a day of normal use.

For people who find the Samsung Galaxy Note II (S$998) to be a little too big for their liking, the Xperia Z (priced at S$998 as well), like the Butterfly, strikes a delicate balance between size and usability. While the Galaxy Note II offers better battery life, innovative software features and a bigger screen, the Xperia Z offers a sharper display in a lighter and easier to handle chassis. Otherwise, there's the slightly smaller 4.8-inch Samsung Galaxy S III LTE or LG Optimus G, which comes pumped with LTE and similar specs.

Previously, one of the hotly debated issues in the forums is whether the HTC Butterfly or the Sony Xperia Z constitutes a better purchase. With the recent announcement of the HTC One, Sony Mobile now has a more formidable competitor in the Taiwanese company's latest device. While it comes with a smaller 4.7-inch Super LCD 3 display (same 1920p resolution), it also features a newer Snapdragon 600 quad-core processor, LTE and a rather impressive 4-megapixel HTC Ultrapixel camera. With its global launch set for March, prospective smartphone buyers might want to hold on to their purses before deciding on what to splurge on.