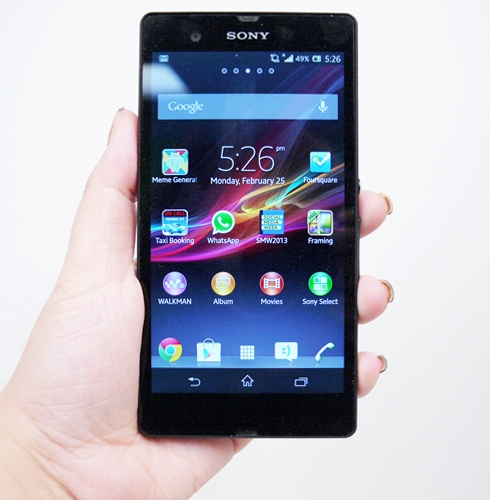 First glimpsed at CES 2013, the Sony Xperia Z has gotten a lot of hype over the last few months, as it is largely touted to be the Japanese company's big ticket item. Sony Mobile hasn't been doing very well on the Android front in the past couple of years and has fallen behind stronger competitors like Samsung, companies who continue to push the envelope in innovation and product differentiation. With Xperia Z, Sony Mobile has finally caught up with the rest of manufacturers, wisely choosing to fight them head-on with the latest hardware specs (and waterproof exterior) which includes a snappy Qualcomm Snapdragon quad-core processor, 2GB of RAM, 13-megapixel camera, a near vanilla Android experience and above all, a 5-inch screen.

Does the newly-released juggernaut have the right elements for victory? Let's find out.

Sony has always been breaking new frontiers when it comes to design and it certainly shows on its flagship 5-inch Xperia Z. That's not to say that there's no signature Sony touch of course - it is instantaneously recognized as part of Sony Mobile's portfolio of mobile devices, right from its angular stature and down to its minimalist design.

Of course, the main attraction here is in its extremely sharp and rather huge 5-inch display. With an astounding 433 pixels per inch and running on the Mobile Bravia Engine 2, you really can't help but notice the clarity of the details on the screen. Thankfully, Sony has managed to keep the larger-than-life smartphone petite and slim for its class at 7.9mm - the Xperia Z feels light in our hands at a relatively decent 146g. For the sake of comparison, the 5-inch HTC Butterfly weighs 140g, a few grams shy of the Xperia Z. As such, we could easily wrap our hands around the device and get a secure hold of it. 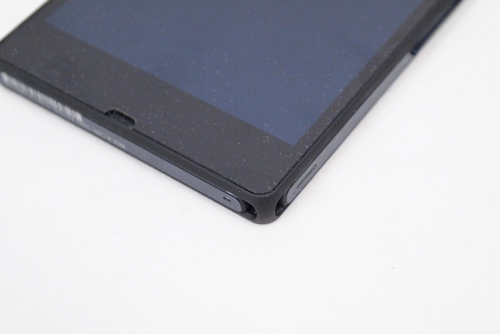 Further complementing the phone is its very understated and classy design. For most parts, the phone is angular, save for its four barely rounded corners. On its back, the word "Xperia" is sprawled across in Sony's trademark font. As its battery cannot be removed, all ports (power, headphone, SIM card slot) are placed along the edges of the device. Being a waterproof phone, they are all covered with plastic flaps which clip into place. As with past experiences, these are usually less sophisticated in execution than in theory - while they work well, they are slightly cumbersome and a little fiddly. Otherwise, when put properly in place, these ports are tucked inconspicuously out of sight. 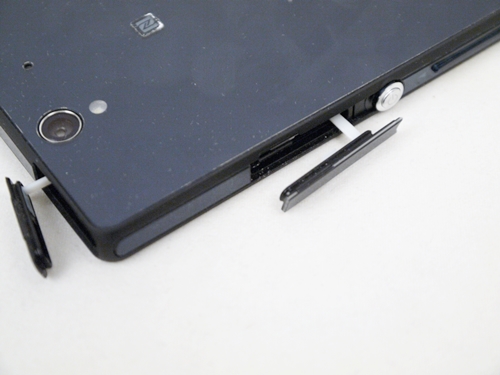 Adopting the same design principles as Google and LG, the Xperia Z sports glass panels, one on the front and another on back. However, Gorilla Glass they are not; instead, Sony uses a combination of tempered glass and anti-shatter film to boost the scratch resistant properties and durability of the glass panels against wear and tear. Unfortunately, due to its glass panels, the Xperia Z turns into a huge mess of unsightly finger prints after mere minutes of manhandling. In fact, it's one of the worst phones in recent times to with regards to the ease in which it picks up fingerprint smudges and the visibility of these unsightly marks. 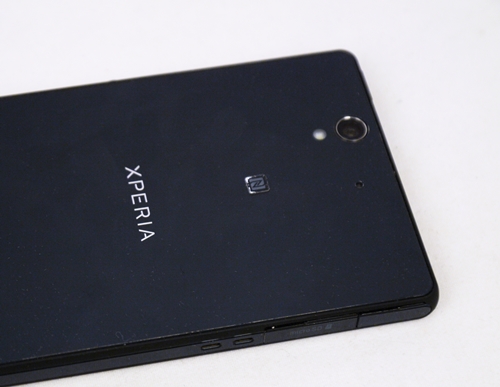 Perhaps one of the more 'unique' design features of the Xperia Z is its metallic power button, which is placed on the right side of the device as opposed to on the top. It's a little too eye-catching for our taste, but thankfully, its location and in-your-face design makes it easy and convenient for users to access the button. Due to its raised nature, it is very easy to press the button even without looking at it. Take note though, several of our office colleagues first thought it was a shutter button for the camera and it's quite likely to be associated as such for most first timers due to its location once you hold up the device for landscape photo taking. 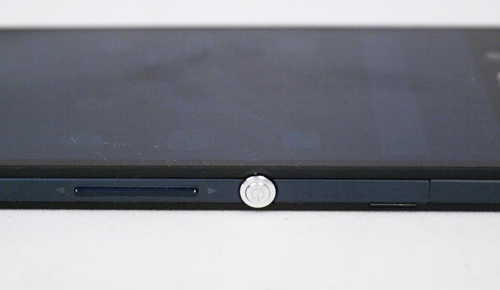 As with all newly-released Android devices, the Xperia Z runs on Android 4.1.2 Jelly Bean out of the box. Sony states that it will be rolling out the Android 4.2 update shortly after the launch of the device in Q1, but at present it remains on Android 4.1. Sony Mobile has left the Android experience relatively intact compared to HTC and Samsung, and we are sure Android purists will appreciate that.

Pressing the Recent Apps button will reveal the multitasking menu on the right, and a shortcut bar dedicated for "small apps". What are "small apps"? They allow for deeper multi-tasking, quite in the same vein as Samsung's multi-window feature or LG Optimus's QSlide function. There's more to play with however, considering the potential of an open-source app environment.

Clicking on a small app, say Calculator for example, brings out a mini calculator pop-up that can be used and is visible/functional even as you are utilizing other apps. The downside is that you can only open one small app at a time. 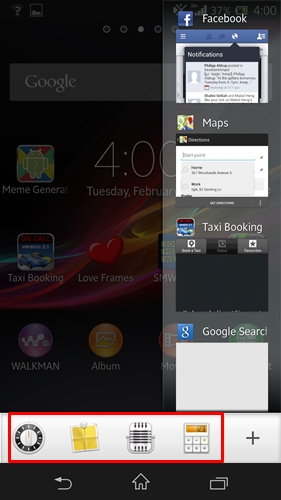 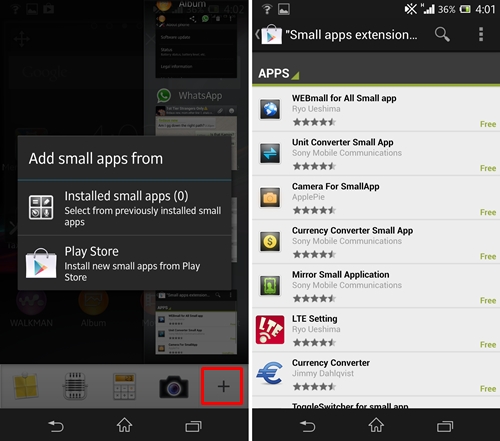 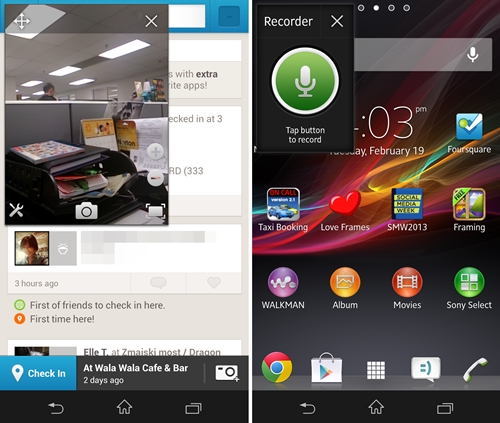 Because battery longevity is a such a big incentive to users in this time and age of battery sapping smartphone devices with big screens, energy saving modes are often included on the devices. The Sony Xperia Z is no exception, and comes intact with one called the Battery Stamina Mode. 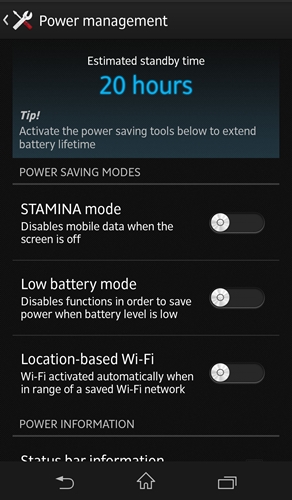 With strong competition between the manufacturers to showcase camera phone technology and Sony has traditionally been at the forefront in this area. To further complement the photographic experience, Sony has added a couple of incentives. 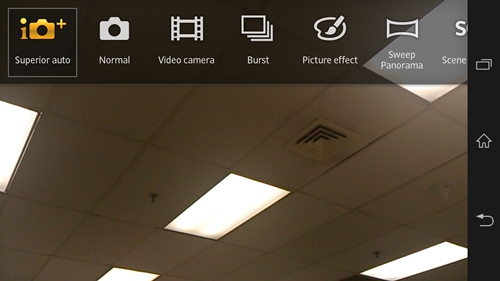