The Sony Xperia XZ packs a flagship Snapdragon 820 SoC, and it's helped along with its Adreno 530 graphics processor. It comes with 3GB RAM and 64GB internal storage that’s expandable via microSD card up to 256GB.

Naturally, we’d pit it against other Snapdragon 820 phones we’ve encountered thus far, along with other phones that come with an equivalent to the Qualcomm processor.

SunSpider JavaScript measures the browsing performance of a device when processing JavaScript. It not only takes into consideration the underlying hardware performance, but also assesses how optimized a particular platform is at delivering a high-speed web browsing experience. Web surfing was smooth, and the benchmark score showed that the XZ is certainly suitable for its class of devices. 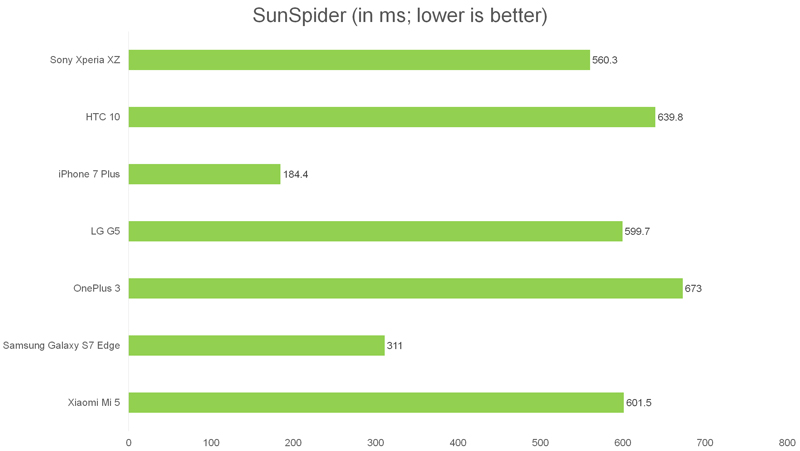 For your reference, the Xperia XZ scored 54.177 for the JetStream benchmark – again, this is a new test where we're gathering test data, so we'll be a while more before we can transition. But as usual, the higher the score, the better.

Quadrant benchmarks a device’s CPU, I/O, and GPU performance. From our tests, the Sony Xperia XZ has a moderate benchmark score for a flagship smartphone, and it’s able to hold its own against other Snapdragon 820-equipped phones. 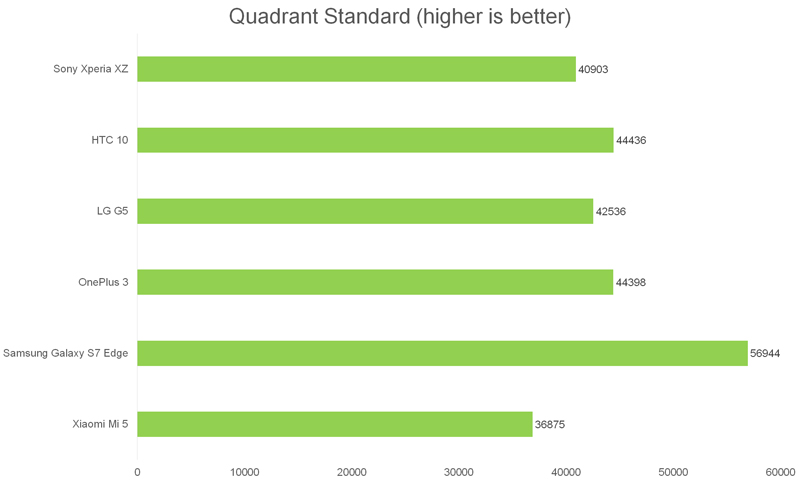 3DMark’s Ice Storm Unlimited test uses a mix of graphics and physics tests to measure hardware performance. The first test measures the GPU’s ability to process lots of vertices, while the second does the same thing with lots of pixels and post-processing effects. Finally, the physics test switches the load to the CPU to test its ability to process physics simulations, while keeping GPU load low. The XZ managed to pull impressive numbers for their graphical benchmark, and our real-world experience with the phone was just as awesome. 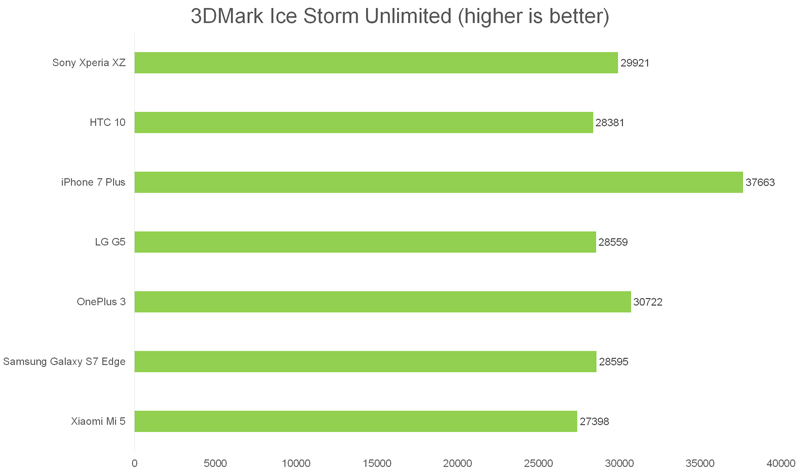 For your own reference, the Xperia XZ scored 2,394 for the 3DMark Sling Shot benchmark – we're still gathering companion results for this new benchmark, but as with 3DMark results, the higher the score, the better.

Our real-world XZ usage was nothing short of pleasant and responsive, and 64GB was comfortable to work with. 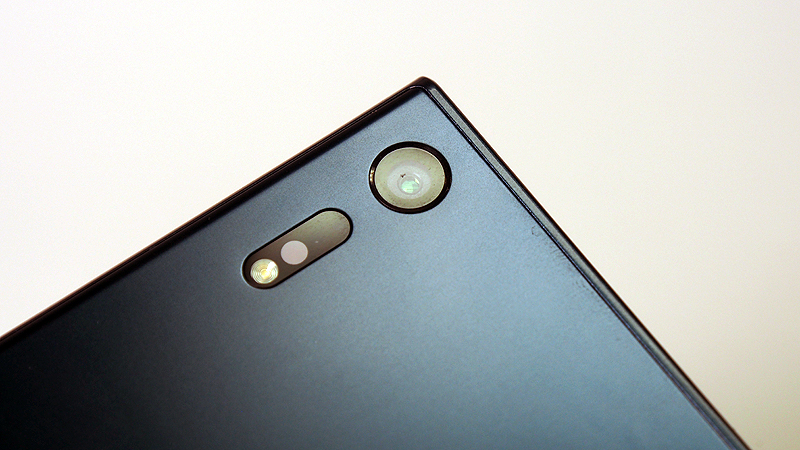 The rear camera uses a 23-megapixel, 1/ 2.3-inch Exmor RS sensor that relies on Sony’s BIONZ mobile image processing engine. It’s paired with a 24mm Sony G lens, and sensitivity goes up to ISO 12,800. What’s truly new is their new Triple Image Sensing technology (a missed opportunity to call it the Triforce). The rear camera now comprises of not one, but three sensors – an imager that predicts subject movement, a Laser AF sensor for speed and accuracy when autofocusing in low-light situations, and an RGBC-IR sensor that measures visible colors and infra-red information for a better grasp on white balancing. By combining these three sensors, we’re led to believe that the Sony Xperia XZ is capable of true-to-life colors, accurate autofocus on subjects, and commendable low-light performance. 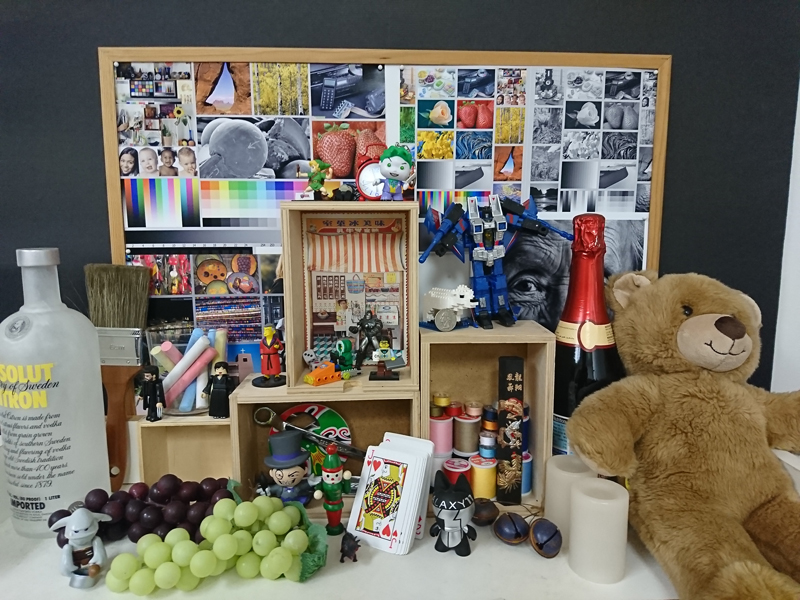 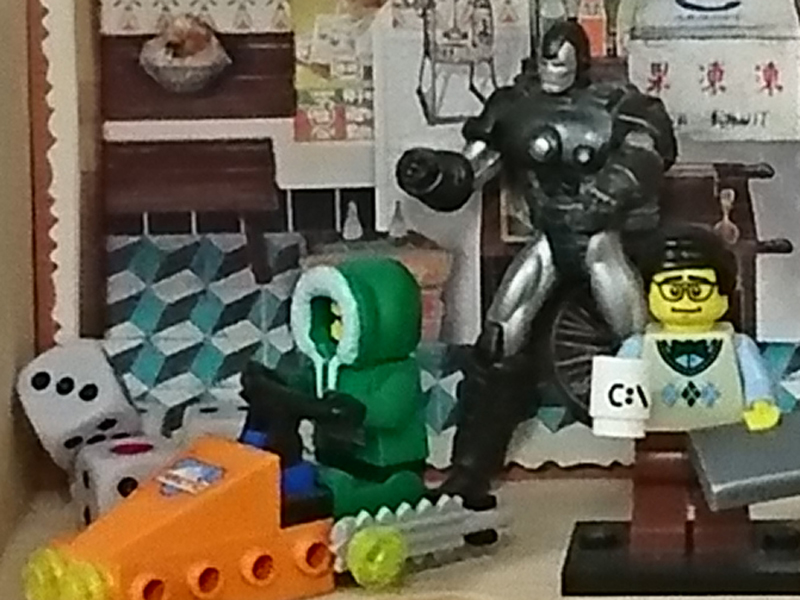 From the test image, it’s quite easy to see how the Xperia XZ is one of the sharpest shooters we’ve met thus far. It’s a touch lower in noise too, compared to the Xperia X’s test image. Color-wise, it has strong blacks, and it adopts a slightly more natural tone at the cost of vibrancy. This also makes the XZ’s image less warm than its Xperia X counterpart. It’s clear that the Xperia XZ did very well as a flagship smartphone shooter, outdoing the OnePlus 3 and LG G5 while putting it on par with the likes of the HTC 10 and Samsung Galaxy S7 Edge.

The Sony Xperia XZ packs a 2,900mAh battery, aided by Qnovo’s Adaptive Charging technology for battery longevity (more information here). It also supports Qualcomm Quick Charge 3.0, allowing the device to fast-charge with appropriate quick chargers – the one provided in the box is a regular 1.5A charger. For power-saving, there’s the familiar STAMINA mode found on Xperia phones. 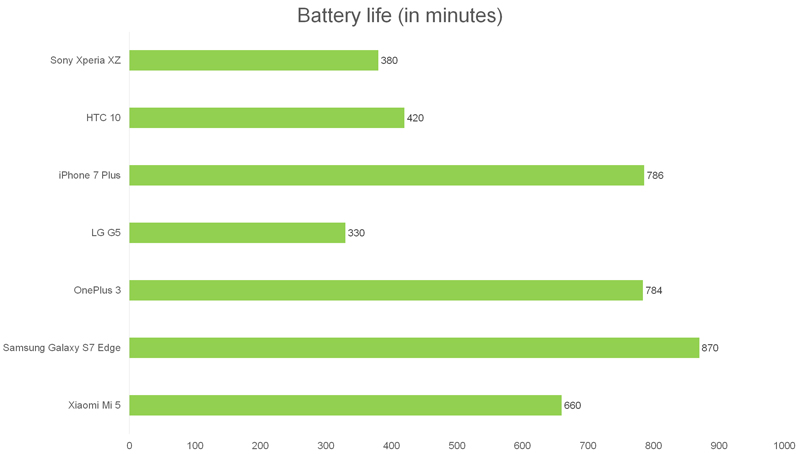 Despite its decent battery capacity and flagship processor, the Xperia XZ is quite the battery hog. From our tests, the phone lasted a mere 380 minutes, putting it on the lower end of other flagship phones. At a glance, only the LG G5 had a lower total. Our day-to-day usage was a different story, as the Xperia XZ did not bottom out with six hours of typical use. Based on our power consumption calculation, the XZ's battery drain is less efficient than the HTC 10’s, but more efficient than the LG G5’s - though they all pale in comparison to the Galaxy S7 Edge. 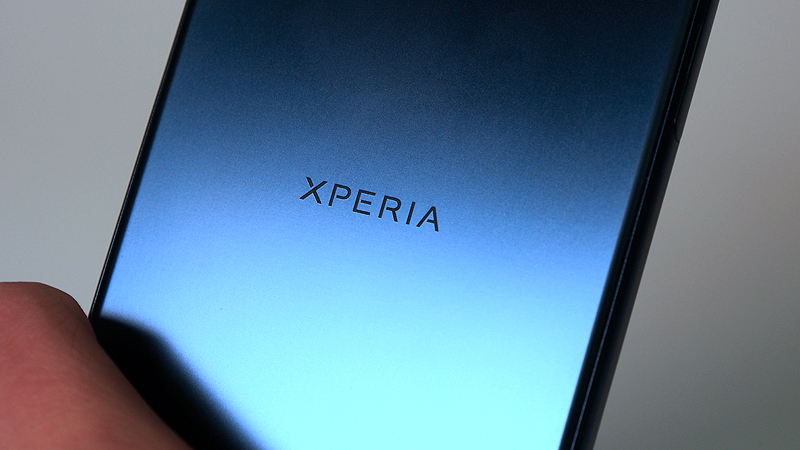 The Sony Xperia XZ is indeed a flagship product that can compete with other flagship rival phones out there. The S$998 price tag seems pretty much par for the course within its tier. While many factors boil down to personal preferences, we can’t deny that the Xperia XZ could strive for an even better battery life. Camera performance on the XZ is one of the better ones we have experienced so far, which is a great plus point for people who want a good Android cameraphone that isn’t from Samsung. All in all, it’s a good smartphone, and even more so for Sony fans who are looking for an upgrade. However, it faces worthy challengers who charge fewer dollars for their flagship phones (like the incoming Moto Z and the OnePlus 3).

What we're certain about when it comes to the Xperia XZ, is how Sony isn’t fixing things that aren’t broken. The features on the Xperia XZ aren’t novel to a phone, and physical changes are minimal. Things like water-resistance and fingerprint sensors are slowly becoming (if not already) a staple for flagship mobile handsets, and the shift to USB Type-C is expected with due time. It’s also clear that Sony leans towards functionality over novelty – which was what helped the Galaxy S7 Edge and the unfortunately Note 7 earn high praise. However, it doesn’t have the same charisma or fanfare, and we attribute that to a tired design (despite it being appealing and practical), coupled with product cycles that are too short to create a sense of receiving consequential upgrades. If you want exciting innovation (like dual rear cameras and modular design) in the mobile space, you’d have to look towards the Korean, Chinese, and even some Western phone makers.

But yeah, if you want something that's simple and actually works, consider the Xperia XZ.