The Sony Xperia 10 II packs a mid-range Qualcomm Snapdragon 665 SoC. It's built on an 11nm process technology and packs an LTE-compatible modem, making it a 4G-capable device. With a processor of this tier and given how some mid-range devices aren't rated under modern versions of our benchmarks, we've decided to pit it against the Oppo Reno2, Google Pixel 3A XL, and Samsung Galaxy A80 (at least, for the scores we do have).

The Sony phone's processing subsystem doesn't quite stack up to these upper-tier mid-range phones from last year, so it's probably going to be a tough fight as the street price for all of these phones are currently evenly matched with the Sony's suggested retail price.

For the scores we don't have, we've shared scores from older flagship phones like the OnePlus 7 Pro, Huawei Mate 30 Pro, Google Pixel 3 XL, and Samsung Galaxy S10+ to see how it stacks up against 2019 flagship devices. For comparison's sake, we'll also throw in an OnePlus 8 Pro to see how it holds up next to current-gen flagship phones. Unlike the other benchmarks, we did have some scores from other mid-range devices that were tested on JetStream 2. For your reference, we've placed their scores in the chart and we'll talk about our experience in total after all the benchmark results. Since AnTuTu is mostly unchanged in recent times, plus the fact it's an all-in-one benchmark, older versions of the benchmarking tool can still be referred to. We've included their relevant scores for reference. The Geekbench benchmarking tool is why we couldn't refer to older benchmark scores of other mid-range devices. Geekbench 4 had a baseline score of 4000 (the performance of an Intel Core i7-6600U processor). As one the first mid-range phones we're testing using Geekbench 5, we'll have to build upon the list of devices as time goes by.

That said, Geekbench publishes benchmark scores by other phones, which you can search via phone model or processor name. Below is a screencap of different devices with Snapdragon 665, showing how the Geekbench 5 performance for the Xperia 10 II is in line with other SD665 phones. 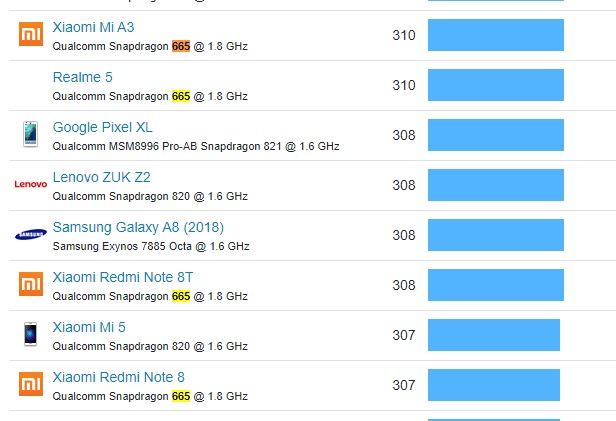 Some of the other mid-rangers also had a go on a slightly older version of 3DMark (ES3.0). Since there isn't a huge version difference with the current benchmark, we've folded their scores into the graph.

By considering our user experience, the benchmarked scores we've gotten, and scores from phones with an identical processor from the benchmarking tools themselves, we must say that the Xperia 10 II isn't quite the mid-range beast we wanted it to be. In fact, it's entry-level benchmark performance, with the delays, loading times, and browsing interruptions all making sense now that we have these numbers. The Sony Xperia 10 II packs a 3,600mAh battery capacity backed by its proprietary Xperia Adaptive Charging technology for further battery care. It has neither wireless charging nor fast-charging capabilities built-in, which is status quo for devices in its class.

Typically, with lower benchmark performance, we've come to expect the device to excel at our battery life testing. We have to say 650 minutes isn't short, especially when it's not the lowest on the chart. It's still not comparable to equally matched alternatives like the Google Pixel 3A XL (almost 300 minutes more with just 100mAh extra juice) and the the upper mid-range Galaxy A80 by Samsung. Both of these comparison devices sport better specs and more powerful hardware, which only further shames the Sony's battery performance standings.

The Xperia 10 II took 120 minutes to charge from 0% to 70% (even with a fast-charging adapter and cable from a reputed electronics brand, but these shouldn't matters since the phone doesn't support fast charging). While we weren't expecting a full charge in an hour (i.e. standard fast-charging times for devices), two hours is still generous for the phone to reach full charge - and it didn't. The Sony Xperia 10 II isn't a stunner, but neither is it just another mid-range with some "bells and whistles". In its defence, it has a 21:9 aspect rario screen, IP-certified water-proofing, a more durable glass body, a 3.5mm audio jack, and a dual nano-SIM tray that contains a hybrid second slot for storage expansion. Further to its credit is the highly practical design and aesthetics of the phone, which looks like textbook modern smartphone design. The software side of things also packs neat tricks like Side Sense and Multi-Window. These plus points are far too useful to simply be 'bells or whistles'. The primary camera isn't half-bad, either. Where it does fall short are the secondary lenses on the rear, and more glaringly the real-world usage, and battery performance. The Xperia 10 II can be a tough phone that looks pretty, but its practicality can be hampered by the latency in little things, like checking the time or getting the fingerprint sensor to recognise its owner. We're not expecting a mini-powerhouse in our hands, but we still expect it to stand up to general usage day-to-day usage needs, and to a lesser extent, be better at the benchmarks.

Sure, it may be a couple hundred dollars cheaper than the upper mid-range alternatives like the Oppo Reno2 and Samsung Galaxy A80, but these phones are older (with Android 9 out of the box) and hence their market value is currently on-par with the S$569 Xperia 10 II, which is a new release.

If you compare phones from the entry-level range and upwards, there's Xiaomi Mi A3 with the same Snapdragon 665 processor retailing at S$349 on Lazada. While the Mi A3 offers a lower rated 720p display and no IP-rated resistances, it makes it up with a bigger 4,030mAh battery capacity and fast-charging technology, on top of dual-SIM support, 3.5mm headphone jack, expandable memory, and also a triple camera system on the rear. It's a tough competition for the Xperia 10 II from both ends of the smartphone scale. If you value practical design, practical features, and a high-quality display to go with the whole package, the S$569 Sony Xperia 10 II could be a viable option. It's a very good backup phone to have given the core functionalities are all intact. If you're used to other mid-range or flagship smartphones from last year's releases, you might have to look elsewhere for an affordable daily driver that feels seamless enough for use.