It's a Working Lad

It's a Working Lad

It's not just all play about this notebook though. It's actually suitable for workaholics. A host of modern security features make it comparable to a business notebook. To start off, we have the first layer of defense in the form of a biometric, fingerprint sensor. It was quite simple to create a user profile and fingerprint scan using the included Protector Suite QL software and this application also has other measures like encrypting private folders and managing your passwords. However, this application currently works only in Windows, while Linux support is iffy. The biometric scanner is aided by an Infineon TPM (Trusted Platform Module) chip embedded within the notebook. While those who abhor Digital Rights Management (DRM) will view this security chip with distrust, it is very useful for a notebook, where you may loathe losing your private data if the notebook happens to get stolen. This chip will store your cryptographic keys as well as contain a random number generator and cryptographic co-processor to create and validate such keys. In short, the foundations for security lie in this TPM chip. 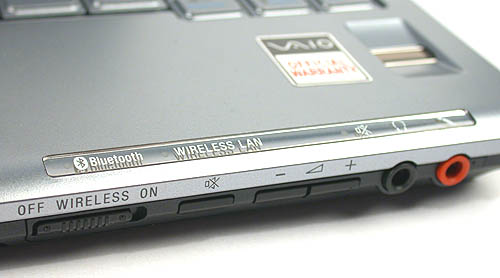 As for its hardware credentials, the Sony VAIO VGN-TX37GP comes with a Core Solo Ultra Low Voltage U1400 processor running at 1.2GHz. An integrated 512MB memory module is supplemented by one SODIMM DDR2 slot for a maximum memory capacity of 1.5GB. Take note that the SODIMM DDR2 slot is already occupied by its default configuration of a 512MB DDR2-533 SODIMM; add the integrated 512MB of memory onboard and you'll arrive at the notebook's default memory size of 1GB. If you foresee heavy multimedia or multitasking work on this little pony, you would be wise to configure the notebook with a full 1.5GB of memory as opposed to upgrading it later. As the notebook is based on Intel's 945GMS chipset, the integrated graphics is provided by Intel's Graphics Media Accelerator 950, which is not exactly suited for extreme 3D gaming. You can probably get by some older games (such as Warcraft 3) decently on this notebook but besides the usual multimedia applications, hardcore games are out of bounds. This all points quite persuasively that the VAIO is primarily business oriented with a dash of multimedia aspect added to make it an all-round notebook for general use. 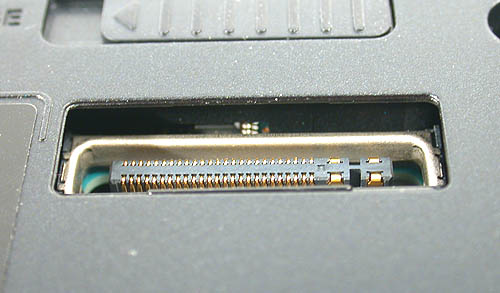 The keyboard is the usual compact version expected for its small footprint and the NumPad is omitted for obvious reasons due to the scarcity of notebook estate space. There are also no special shortcut keys that open the default mail or Internet browser, just a single Function key. The limited space also leads to some less than ideal situations. For one, the touchpad and mouse buttons were rather close to the edge so it can feel like there is no proper support for your wrists. At least they were relatively flush with the chassis so it can be quite comfortable 'mousing' with the touchpad, though a wrist rest may be preferred for long hours. 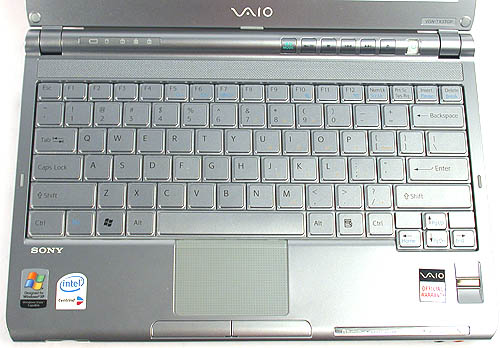 You may have heard horror stories of exploding notebooks due to faulty batteries or overheating issues that should make one wary of ever putting any notebook on the lap but we can say with confidence that you're unlikely to burn any part of your body with this Sony VAIO. The heat generated by this notebook is quite moderate and while prolonged contact with the base of the notebook is probably still not the best thing to do, it definitely won't singe your lap. There was also hardly a peep from it in terms of fan and other related operational noise, though in terms of its integrated stereo speakers, they were quite harsh and generally we don't recommend that you turn up the speaker volume.

Finally, the most important consideration for a notebook companion meant for those on the go - battery life. Here is where all the compromises made, like the less powerful processor and integrated graphics, along with a smaller, slow spinning 1.8-inch 4200RPM hard drive, all contribute to its long lasting battery performance. Running MobileMark 2005 repeatedly, the Sony VAIO VGN-TX37GP lasted 419 minutes, just a minute shy of seven hours. Needless to say, this is outstanding performance though Sony's specifications listed it as having up to 9.5hrs of battery life so you may get better mileage for normal usage.