This being the first Core Solo in our labs, we couldn't really get a perfect comparison with another notebook with a similar processor. Given that the hardware specs for this VAIO is suitably modest, we decided that the budget Turion 64 X2 powered BenQ Joybook P41 that we had previously reviewed should be in a similar performance ballpark. As the hardware components for these two notebooks are actually quite dissimilar, like the BenQ having less memory but at the same time a faster, dual-core processor, you should take the results as a guide as to the performance expected from the VGN-TX37GP. Below is the table detailing the differences between the two:

First, we have our own homebrew portability index, where we basically take into account of factors like the weight of the notebook, the dimensions and its battery life. Since notebooks can vary in so many ways more than your generic desktop PC, from the design to the specs that they resemble, we felt that it was important to try to amalgamate the information into an index that tells the whole story simply. Here, we want to know how portable a notebook really is, not only in terms of its absolute weight but how far you can travel with a still usable notebook.

As you can see from our index below, the Sony VAIO VGN-TX37GP was heads and shoulders above most of the competition, even that of the former top gun IBM X40. It was surpassed only by the Samsung Q30, which looks to be a close competitor based on its likely performance and portability. However, taking the raw numbers by itself, the almost seven hours that the Sony VAIO managed definitely tops the 5hours and 38 minutes that the Samsung Q30 managed. The even slimmer proportions of the 1.1kg Samsung were the main reasons of its superior score here, but that's because it lacked any optical drive. So in essence, the Sony VAIO VGN-TX37GP has actually carved itself a new record for an all-encompassing notebook in our Portability Index and besting the veteran IBM X40. 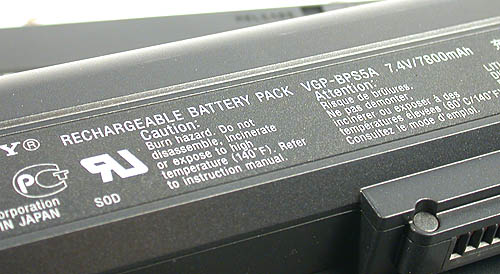 The main reason for its long battery life is probably its frugal power consumption and much of this is directly attributed to the choice of an Ultra Low Voltage Core Solo processor. Compared to the BenQ, the Sony VGN-TX37GP uses less than half its power consumption at only 8.27W. Together with its powerful six-cell battery rated to provide more than 57Wh, this was sufficient to last seven hours in our benchmark. Sony's claims of more than nine hours of normal usage sounds pretty valid by our testing standards.