With newfangled devices like Microsoft's (codenamed Origami) Ultra-Mobile PC (UMPC) concept - which looks like a cross between a PDA and a notebook - starting to appear in the market, the thin and lightweight notebooks face more competition than before. As these notebooks are targeted at consumers who value portability above all else, there are inevitably compromises that manufacturers have to make to ensure that they are as light as possible while still possessing a decent degree of processing power.

Compact UMPCs like the Samsung Q1 take a more extreme approach to the size/weight issue by completely ditching 'non-essentials' like a keyboard and optical drive. Of course, the optical drive is usually one of the first components to be sacrificed too in the name of portability for a thin and light notebook but to do away with the keyboard also? Well, we haven't seen such a notebook yet but it is precisely such a move that allows UMPCs to go below 1kg in weight. Hence, one could see why the UMPC could possibly start eating into the traditional domain of thin and light notebooks very soon since they are essentially chasing the same group of users - mobile information workers.

However, despite having the dubious backing of Microsoft (Tablet PC anyone?), UMPCs are as yet relatively unproven in the marketplace. So for the frequent business traveler who needs a portable computer, thin and light notebooks are still the trusted option for now. For those looking to inspire gadget envy among their peers, they can turn to Sony's latest ultra portable notebook, the VAIO VGN-TX37GP to get their dose of glamour. This newly launched notebook bears the distinctive silver VAIO logo and weighs a mere 1.25kg inclusive of its battery and there's even an integrated DVD burner. It certainly makes a fair case for itself as a decently equipped notebook. 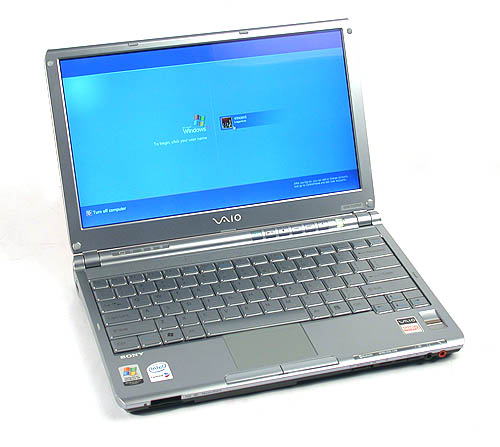