Sony Vaio Duo 11 - Blurring the Line Between Tablet and Notebook

Sony Vaio Duo 11 - Blurring the Line Between Tablet and Notebook

Why Touchscreens Have Changed Everything

Notebook PCs have essentially followed the same basic design for the past thirty years: a clamshell form factor with a screen on the top half and a keyboard on the bottom half. With the release of Microsoft’s touch-enabled Windows 8 OS, it quickly became apparent that this form factor just wasn’t going to work anymore - the main problem being the limitation of the hinge (as we found out in our review of the Samsung Series 5 Ultra Touch). Not only does it leave the screen unstable and wobbling when poked and prodded, the basic design only allows for a limited degree of movement, which leaves the keyboard in an awkward obstructing position for any apps requiring the screen to be on a flat surface (such as writing, drawing or in the case of many games).

As a result, we’ve seen a number of innovative new notebook designs from ASUS, Dell, HP, Lenovo, and Toshiba that try to combine the notebook form factor with that of a tablet (allowing the screen to be placed flat), with varying solutions for transforming back and forth between the two. Today we'll be taking a detailed look at Sony's efforts.

Sony’s take on this convertible form factor is the Vaio Duo 11, an 11-inch, full HD, touchscreen Ultrabook, which does away with the hinge and lid altogether by using a unique ‘Surf Slider’ mechanism that lets the Duo 11 transform from a tablet to a notebook by sliding the screen up and back to reveal the keyboard. Toshiba's Satellite U920t is another convertible Ultrabook using a slider style design. While both are described as 'Sliders' in general, Sony's Duo 11 is very different in the sliding mechanism used:- 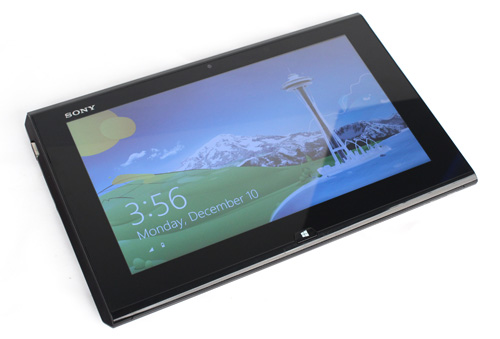 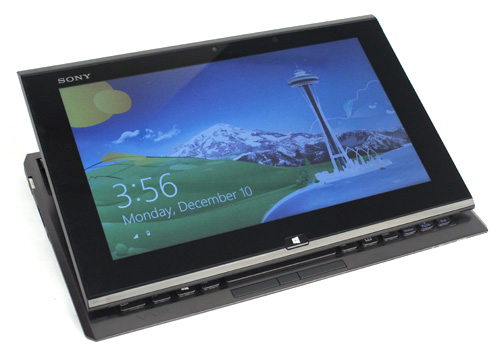 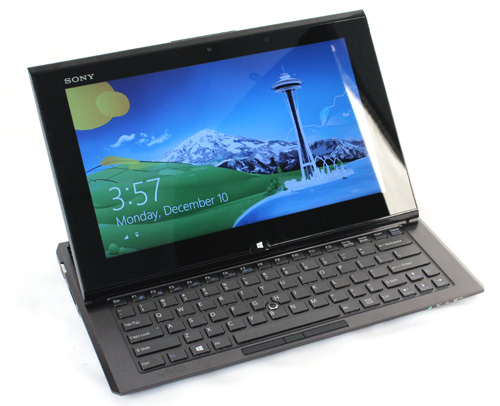 Sony developed the Duo 11 for business users, and while there are tablets out there that can be used for business by combining a separate keyboard when required, we found this model to be far from ideal, as you never know exactly when you might need your keyboard, so you might not have it with you. With the Duo 11, the keyboard is always there and you can switch between tablet and notebook mode at any time.

Secondly, we found that other 'convertible' notebook designs such as those that fold fully back or twist on a hinge require at least two actions to convert between tablet and notebook. With the Duo 11, the transformation can be done with one simple action.

We discovered that ‘Slider’ is a bit of a misnomer for the Duo 11 as, upon closer inspection of the mechanism, we found that it uses a spring-loaded hinge attached to a pair of arm-like levers that pops the top of the screen upwards into place. 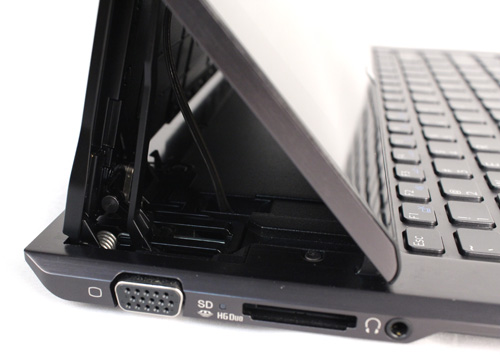 In practice it's actually very similar to opening and closing the lid of a regular notebook, only done from the back instead of the front of the device. Similar to a notebook lid, a thin catch can be found at the rear making it easier to lift up. A quick office survey had our colleagues struggling for a few minutes when given the Duo 11 without any instructions, but after we pointed out the lifting action, most got it immediately and actually liked the implementation. 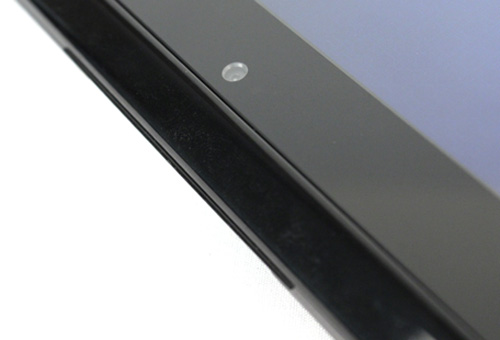 The 'Surf Slider' mechanism isn't exactly automatic, but the spring-loaded hinge and lifting arms are very smooth and once the screen gets moving, the combination of its weight and the spring will pop it easily into place. It’s much smoother than Toshiba’s U920t, and compared to other 'convertible' notebook designs such as those with removable keyboards (e.g. HP's Envy X2) or those that fold fully back (e.g. Lenovo's IdeaPad Yoga), the 'Surf Slider' is definitely the quickest to transition between the tablet and notebook usage modes.

However, it does have its own drawbacks. Depending on how you might use the convertible notebook, these are some of the concerns you should be aware about:-

The Duo 11 measures 320 x 199 x 17.85mm and weighs 1.3kg, which makes it the smallest and lightest convertible Ultrabook available. It uses a mixed aluminum and plastic build - the screen and keyboard well are aluminum, while the base is all plastic. All Duo 11s are made in Japan. 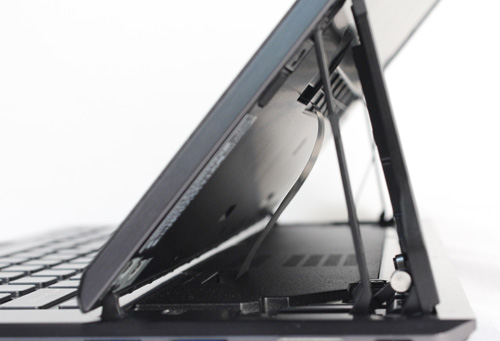 Without a doubt, one of the highlights of the Duo 11 is its gorgeous full HD 1920 x 1080 pixels resolution IPS touchscreen - it's also one of only two convertible Ultrabooks with a full HD display (the other being Dell's XPS 12). Not only is the resolution fantastic, it's also very bright with superb viewing angles. However, one drawback is that due to the high resolution and small screen size, icons can look absolutely tiny in Windows 8’s desktop mode (you can fix this by scaling the OS view mode to 150%).

One concern we had was that, with no lid to protect the screen, it could easily be damaged. When we voiced our concerns to Sony however, we were told that Sony's stress testing process includes repeatedly dropping a weight onto the screen to stress test it against damage and it seems to hold up fine. Additionally, while Sony hasn't announced anything officially, the display does appear to be Corning Gorilla Glass, and as such it should be able to take quite a pounding. A quick scratch test in one corner with the tip of a screwdriver left the screen unscathed so if it isn’t Corning Gorilla Glass, it’s certainly a very close imitation. One drawback is that, as with most Gorilla Glass screens, it's very glossy and also quite the fingerprint magnet.

With that said, even if Sony qualifies the screen fit for daily wear and tear, most consumers aren't well educated on the advancement in screen build and design. As such, they would quite likely mark down the Duo 11 for the lack of screen protection because they're unaware of its durable properties. Essentially, this is a marketing issue that Sony has to figure a way out to reach out to the masses, else they'll lose a potential group of interested buyers. 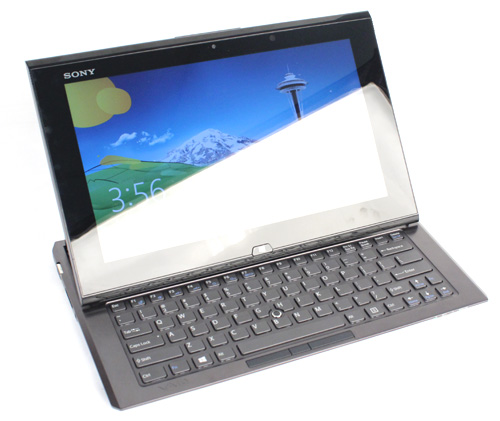 Audio on the Duo 11 comes from two small speakers at the front-bottom of the device. Overall volume was fairly decent for a small 11-inch notebook, and it should be suitable for personal movie watching, but you’ll probably do better with a good pair of headphones or a portable mini-speaker. Next to the left speaker you'll also find some awkwardly positioned media controls. 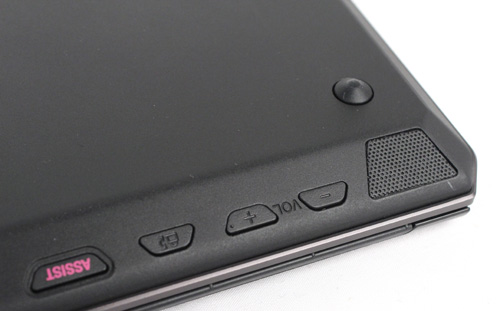 Keyboard Usability and Other Input Options

The Duo 11 uses a chiclet style backlit keyboard. The keys are a little bit smaller than standard and they’re quite shallow too. Additionally, due to the space taken up by the sliding mechanism, there's no space for a wrist rest, which makes typing a bit awkward. If you've ever used a peripheral keyboard with a tablet (such as Logitech's Keyboard case for iPads), the cramped space and missing wrist rest makes it feels somewhat similar. 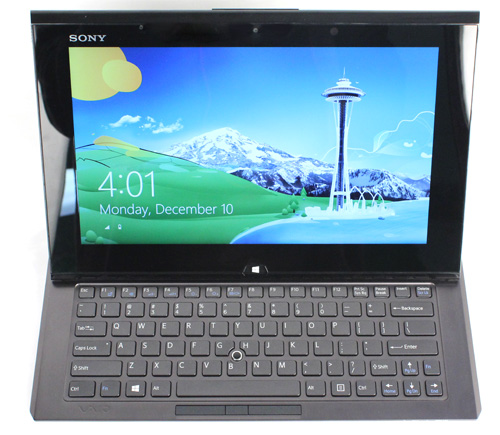 Having said that, when this reviewer passed the Duo 11 to a colleague who primarily reviews tablets and smartphones he was more impressed with the Duo 11's keyboard, stating that it's larger than most tablet keyboards (such as the in-built one on ASUS' Eee Pad Slider). He also liked the backlight aspect, a feature missing on almost all tablet keyboards and peripherals.

With this in mind, we expect that users who have more experience using a notebook keyboard might find the Duo 11 keyboard somewhat unsatisfactory, whereas users who primarily use tablets will find it a step up.

The trackpad has also been removed and replaced instead with an optical sensor, which, in theory should operate in a similar style to Lenovo’s track point nubs used on the Thinkpad machines. In practice it's a bit awkward to use and we experienced some unresponsive cursor jerkiness with it. The trackpad buttons have been replaced by thin slivers found on the edge of the keyboard, although due to the lackluster optical sensor you probably won't be using them much. 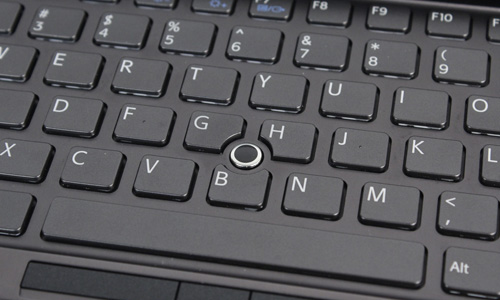 It’s not the most elegant setup and honestly, it’s fairly obvious that Sony designed the Surf-Slider mechanism first and then worked out how to shoehorn the keyboard and trackpad functionality into the device afterwards. Having said that, the loss of the trackpad is partially offset by Sony’s bundled Digitiser Stylus.

To try to make up for the woeful optical sensor, Sony has partnered with Ntriq to develop a new stylus technology for the Duo 11 called the Digitiser Stylus. The stylus has been designed so that writing on the tablet feels more natural and akin to writing on paper with a pen or pencil and comes with a choice of two switchable tips, for your preference of either a hard (pen) or soft (pencil) feel. 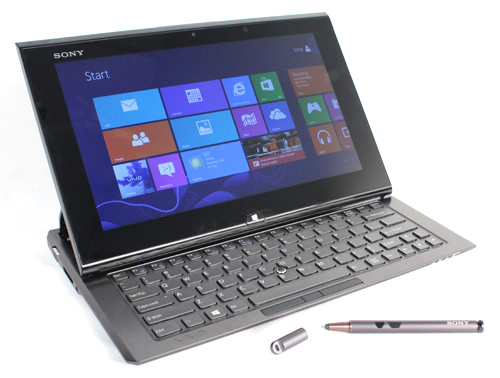 The stylus has buttons for right and left click and is powered by one AAAA battery which, according to Sony, has a battery life of about one and a half years. In usage, the stylus works well, although there was some slight input lag. We also noticed that, compared to Wacom technology, the Duo 11 stylus needs to be a bit closer to the screen before it will recognize and track.

While the stylus is a welcome addition, in what seems like a major oversight - or possibly just more evidence that Sony worked out the input devices after the body design was already finalized - there is no slot on the Duo 11 to store the stylus. An extended battery pack is available which does have a stylus slot, but this is sold separately. If you’re not interested in purchasing that, the best you can do if you don’t want to lose the stylus is to use the lanyard hole on its cap and hang it around your neck - not the most fashion savvy of solutions.

By the way, if you do lose your stylus, you'll have to shell out S$119 for a replacement (available from any Sony store in Singapore).

To complement the stylus, Sony is bundling the Duo 11 with a number of apps. The most interesting of these are the "Note Anytime" app which completely does away with the need for a keyboard by allowing you to write directly onto the tablet and have it converted into a regular document, and 'Active Clip which lets you use the stylus to select an object in an image and easily cut it out of the background for use in Photoshop or other image programs. The stylus also lets you write the name of a program or app directly into Windows 8's search bar, and the Duo 11 will recognize your writing to search for it. 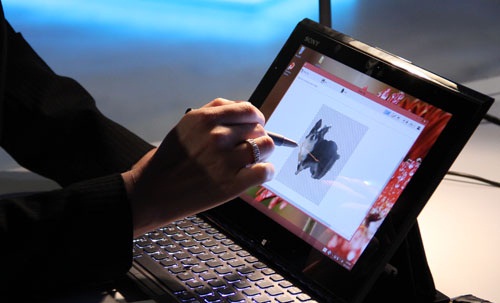 Connectivity-wise, the Duo 11 is very impressive with Sony managing to squeeze in just about every port you would need on a modern mobile device. 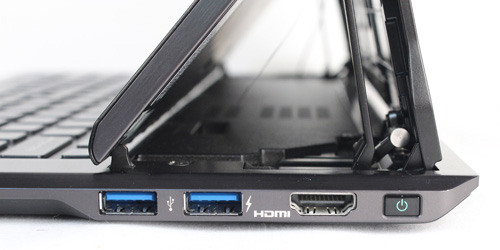 Hidden inside the Duo 11, you'll also find an assortment of sensors usually only seen on tablets and smartphones, including an accelerometer, a gyroscope and a digital compass. The Duo 11 is also equipped with NFC (Near Field Communication) technology! 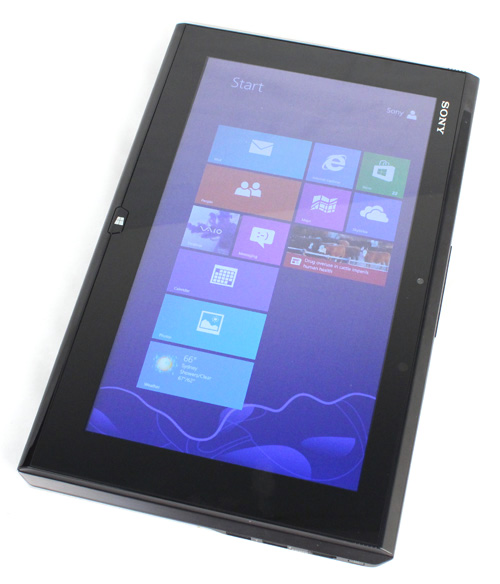