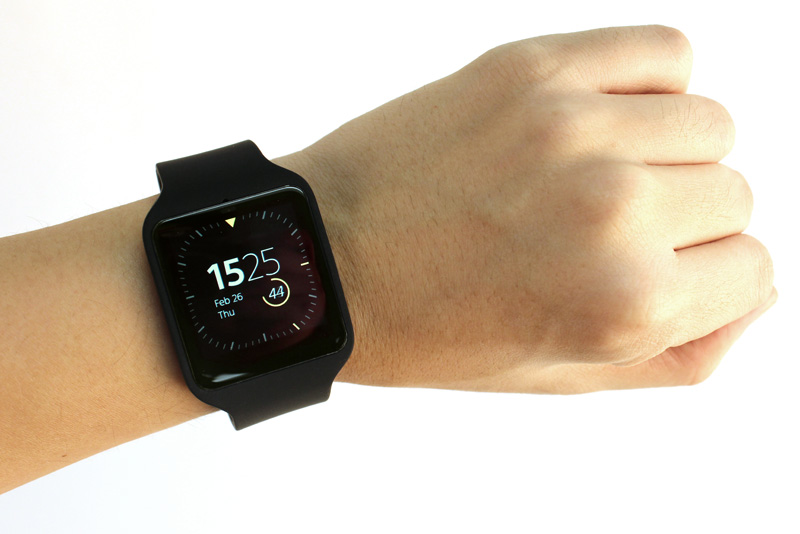 Sony is no stranger to the wearables market. After experimenting with Bluetooth-enabled watches as early as 2006, the Japanese company was one of the first to launch an Android OS smartwatch with the Sony SmartWatch 1 back in 2012. That was followed by the SmartWatch 2 in 2013, and last year, Sony released the third iteration in the series, unsurprisingly named the SmartWatch 3. While the SmartWatch 3 wasn't available for our recent smartwatch shootout, we've since gotten our hands on a review unit.

The SmartWatch 3 has an improved design, with better waterproofing and interchangeable straps. More importantly, it ditches Sony's clunky custom interface, replacing it instead with Google's Android Wear, the same OS used by LG, Motorola and ASUS, as well as many other smartwatch brands, for their smartwatches.

While manufacturers like LG and Motorola have been experimenting with round smartwatch faces, and others like ASUS have tried to capture the elegance of high-end watches with premium leather straps and stainless steel and rose gold builds, Sony has opted for a more sporty look, with a square face and a no nonsense black rubber strap that encases the screen. The back of the watch is actually stainless steel and a nice premium touch, but it's completely hidden by the strap. As a result, the SmartWatch 3 looks more like a fitness device than a regular watch. 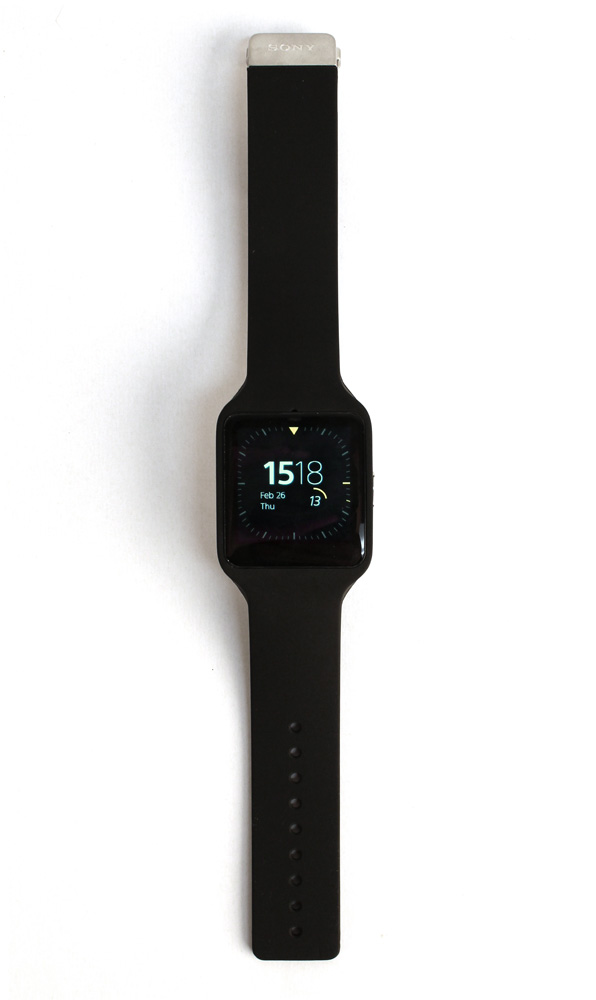 It's not unattractive, but it certainly doesn't have the same elegant dressy feel as the metal and leather Moto 360 and ZenWatch, nor the tough sports watch feel of the G Watch R. The plain square face and black rubber strap are a little dull, and the watch looks a bit too much like a tiny computer strapped to your wrist for our tastes. It's definitely more geek than chic.

Having said that, the flexible rubber strap is quite comfortable to wear, and the watch itself is fairly slim and light. The deployment clasp strap is easy to set up for your wrist size, and it's also fast and simple to put on and take off. You can actually remove the entire watch module from its strap (just pop it out), and swap the strap out for a different color or style if the black rubber isn't to your liking. Unfortunately, it won't take a standard watch strap, so you'll have to make do with one of Sony's custom straps. A quick look through Sony's website reveals bright yellow and pink rubber options, as well as a white rubber strap, black or brown leather straps, and even a stainless steel bracelet option.

On the side of the watch, Sony has replaced its signature round power button (as seen on Xperia Z smartphones and tablets, and previously on the SmartWatch 1 and 2) with a more generic oblong-shape settings button. It's a bit easier to press, but it doesn't look as interesting.

One area where the SmartWatch 3 is slightly ahead of the curve is its dust and water resistance, which is marginally better at IP68 (compared to IP67 for most other watches).

The SmartWatch 3 has a 1.6-inch square display with a 320 x 320 pixel resolution (283 ppi). In terms of clarity, it's about as good as the other Android Wear smartwatches we've seen, and it's also fairly bright. Unfortunately, the display has a very obvious yellowish tinge to it and, as a result, everything looks much warmer than it should. Viewing angles aren't great either, meaning you have to look straight at it to get an optimal view. 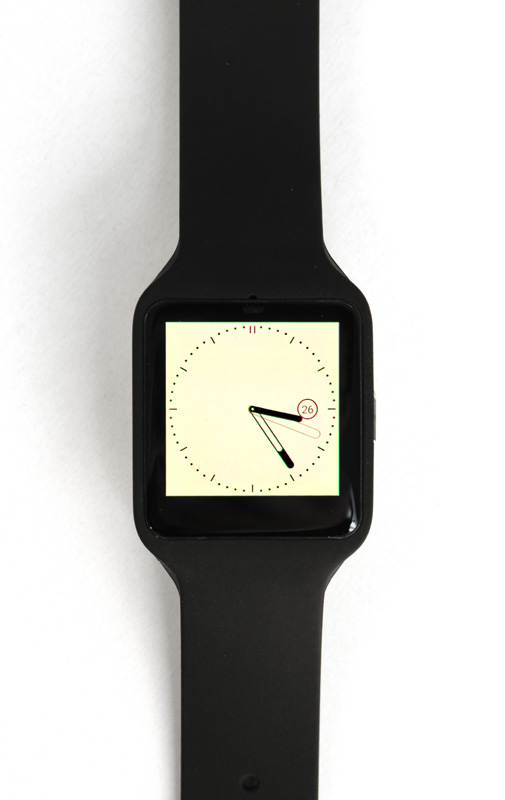 As with all Android Wear watches, you can choose from a selection of different watch faces. Avoid white faces though, because the yellow tinge makes them look dirty and grubby. Additionally, the selection of pre-installed watch faces is rather limited on the SmartWatch 3 (especially when compared to the likes of the LG G Watch R), and you'll probably want to download some extra custom watch faces as soon as you can.

The SmartWatch 3 runs Google's Android Wear OS for wearables, which, unlike Android on smartphones, is basically identical for every manufacturer. As with all Android Wear smartwatches, Google Now style cards will pop on your home screen, and can be opened to see more information or swiped to dismiss. The watch also accepts voice commands, which you can use to search the web, set alarms or check your schedule. The SmartWatch 3 performed fairly well on all of these tasks, and its microphone is good enough that you don't need to speak directly into the watch.

One of the features that sets the SmartWatch 3 apart from other Android Wear watches is its built-in GPS, which means you can go running with it and have it track your distance and location without bringing your phone with you. Watches like the LG G Watch R, ASUS ZenWatch and Motorola Moto 360 don't have their own GPS, relying instead on being tethered to your phone, which can be annoying to bring out with you on your run.

When the GPS was working, it seemed fairly accurate, but for some reason I had trouble getting it to sync with Sony's own LifeLog app, which comes pre-installed on the Xperia Z3. On the other hand, Google's My Tracks app worked fine.

While the GPS tracking is a nice addition, one glaring omission from the SmartWatch 3's feature list is a heart-rate monitor, which really stops it from being a fully featured health device. Considering that almost every other smartwatch out there has some form of heart rate monitor, this seems like an oversight on Sony's part.

The SmartWatch 3 is powered by a quad-core ARM Cortex A7 processor. Transitions were generally smooth and it handled Android Wear's various animations without a hitch. Sony has squeezed a fairly large 410mAh capacity battery into the SmartWatch 3, which they say will give you two days of usage on a single charge. In my experience, you'll get about 20 hours out of it, although you can save some battery by turning off GPS. This puts the SmartWatch 3 on par with other Android Wear watches, but you'll still need to charge it every night.

The SmartWatch 3 charges directly via a built-in micro-USB port rather than requiring a cradle like almost every other smartwatch. On the one hand, this is great because it means you don't have to remember to bring your cradle with you when you're going on holiday, and on the other hand, it can be quite annoying because the sealed cover that protects the micro-USB port is fiddly to remove. It could also possibly wear down over time, eventually compromising the watch's waterproofing. (We reckon most Xperia V owners by now face similar problems and thus we foresee the same issue repeating again after a year of use or more). 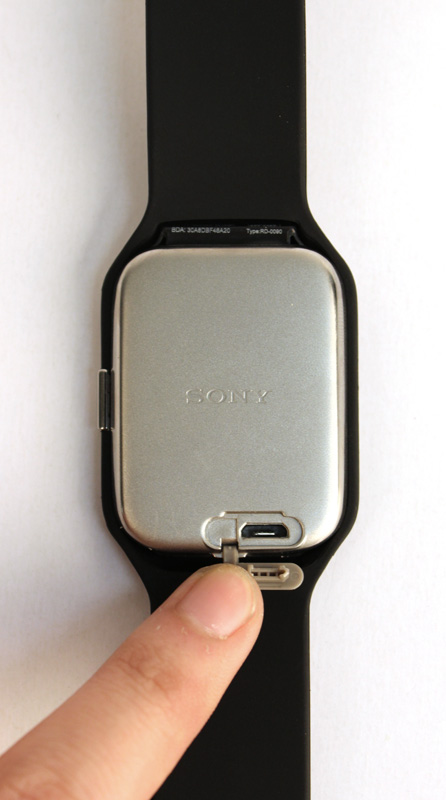 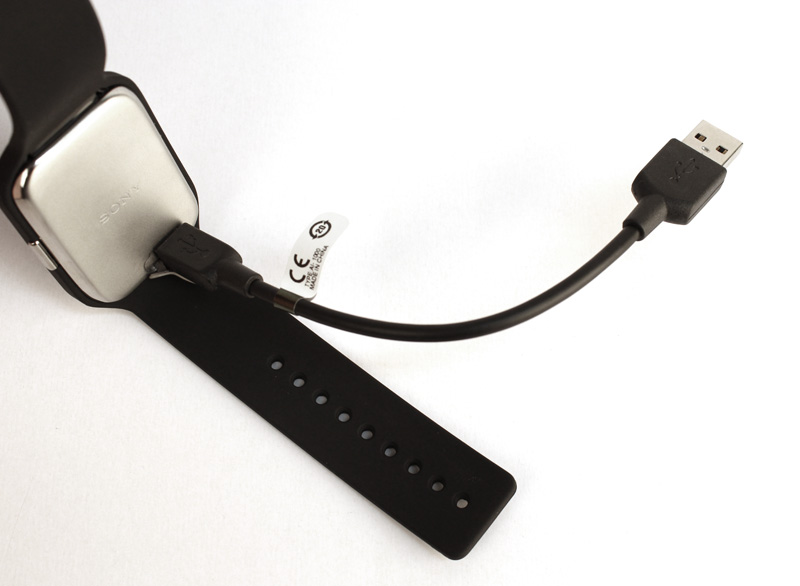 With its built-in GPS, IP68 water and dust resistance, and sporty, rubberized design, the Sony SmartWatch 3 is clearly aimed at fitness fanatics, rather than style conscious fashionistas. However, without a heart-rate monitor, it lacks a crucial feature required for any kind of advanced activity tracking, and it's also let down by its yellowish display and poor viewing angles. While we like the direct USB charging interface on the watch, the port cover design is one that could be a concern and might get compromised over time.

If you're after a dedicated activity tracker there are better, and cheaper options out there. And if you're after a smartwatch, there are more stylish options with better screens (and built-in heart rate monitors!) available.

Write a Review
Compare This | Specifications
Built-in GPS
IP68 dust and water resistance
Direct charging via built-in micro-USB port
Dull design
Yellowish tinge to display
No heart rate monitor
Not compatible with standard watch straps
Micro-USB port cover can be fiddly to open
Our articles may contain affiliate links. If you buy through these links, we may earn a small commission.
Sponsored Links