The Need for a QWERTY Android Smartphone

Sony Ericsson’s focused approach on the Android platform has seen a slew of smartphones powered by the Google mobile operating system. Over the course of 2011, its Xperia lineup has been steadily introduced, some with much fanfare like the Sony Ericsson Xperia Play and Xperia Arc, while others took on a low key approach. The latter approach is taken with the Sony Ericsson Xperia Pro, an Android 2.3 device equipped with a slide-out physical QWERTY keyboard.

Considering that the Xperia Pro comes with a second layer to house the QWERTY keyboard, its thick 13.5mm profile is understandable, but it won’t be winning any design awards for that. The QWERTY keyboard, tucked beneath the Xperia Pro’s 3.7-inch display, doesn’t take too much effort to slide out. Incidentally, this will unlock the device, though its response time is relatively slower compared to swiping the screen and unlocking it.

Thanks in part to its 3.7-inch display, the keyboard has a much wider area to work with. One might think that the wider dimensions will give us a better typing experience, but that’s only partially true. Though the keys are well-spaced, there were some issues with fast and accurate typing due to the flushed nature of the keys. Its particularly stiff keys didn’t help with the typing experience. And when you think about how your keyboards are usually arranged in a trapezoid frame, the Xperia Pro’s choice of a rectangular frame for its keys did throw us off track. There were times when we felt that the onscreen keyboard might have done a better job. While it did turn out to be true, we’d still prefer to have a whole display available to view, instead of having a virtual keyboard occupying half the screen. 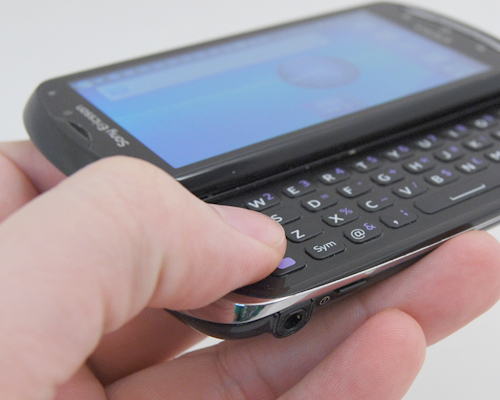 Similar to its thinner Xperia Arc or Arc S cousins, the Xperia Pro comes with three physical buttons located at the bottom of the screen. The buttons are admittedly situated too low on the front profile, which can get challenging when we try to access the said buttons whilst balancing the phone precariously. The back, home and menu buttons are much easier to click, as compared to the thin and flushed ones on the Xperia Arc and Arc S.

Its side profile houses the common shortcut buttons for features such as the camera, power and volume buttons. Unfortunately, these buttons have a relatively small surface area, making them hard to locate and click. This is especially frustrating for right-handers trying to put the phone to sleep. With the power button located on the left, we naturally used our right index finger on it. Unfortunately, the button is located on the upper half of the side profile; coupled with the small area to work with, there was much difficulty in hitting the button and putting the phone on standby. The same can be said for the camera button, which is situated far too low on the right profile for easy access, not to mention ease of use. 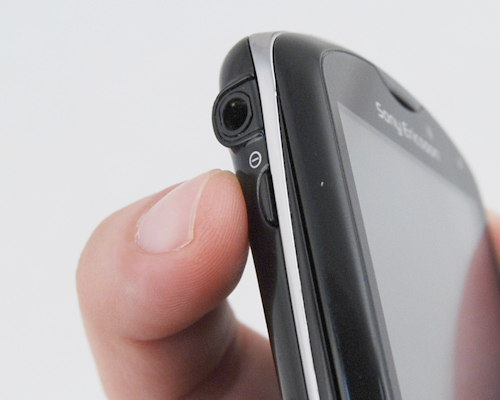 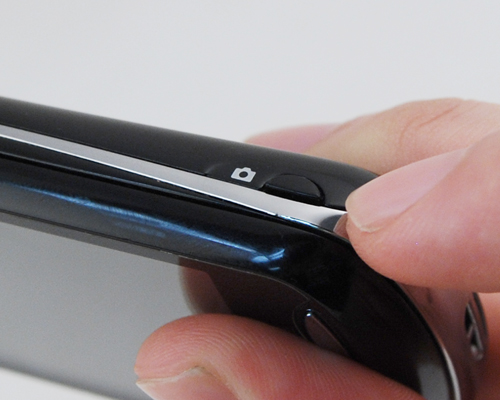 All things considered, the Xperia Pro isn’t half bad when we handled it. With its keyboard tucked away, we had a solid grip on the device, and its 3.7-inch screen was definitely easy on our eyes. Swiping through widgets and apps on the five home pages wasn’t too difficult, given that we did not have to stretch our thumbs to swipe the pages from edge-to-edge. More importantly, with an evenly distributed weight of 126g across the device, our arms weren’t too stressed out after an extended period of usage on the Xperia Pro.

Likewise, the Xperia Pro comes with a few unique customizations to differentiate itself from the competition. Other than the exterior, the changes you’ll notice comes from its user interface. For one, there are more widgets than the ones found on a vanilla Google Android 2.3 Gingerbread.

A quick pinch on the screen will show you an overview of the widgets populating the five home pages. While the concept is similar to how HTC does it with HTC Sense and Samsung’s TouchWiz, Sony Ericsson has taken on a more cluttered approach, with the widgets being consolidated together in one page.

The folder concept isn’t new either, but Sony Ericsson takes it a step further. While you can customize four shortcuts for the commonly used apps, you can also drag and drop more apps into one of these four shortcuts, turning it into a folder. Each shortcut houses up to sixteen apps, but practically speaking, you are probably better off with just four apps in one folder since only the first four apps will be visible as thumbnails. 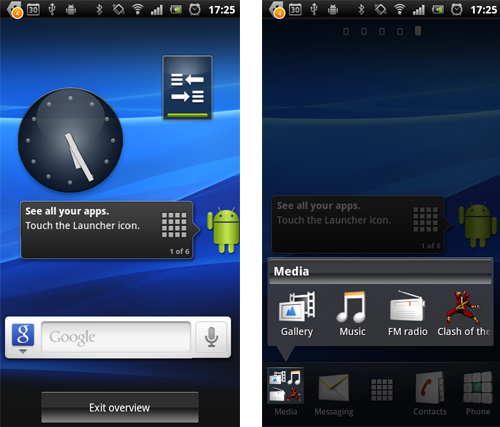 One of the more prominent customizations is found through its email app. Instead of a one-page interface, the Xperia Pro provides an additional pane that lists your emails, on top of the email that you’re currently reading. On the portrait orientation, this might not seem too useful, but once we switched it to landscape mode, the two pane approach made it much easier for us to read through our emails. A 3.7-inch will do nicely for this split-screen presentation, though we wouldn’t mind a larger screen, perhaps up to 4-inches or more, for this particular feature. 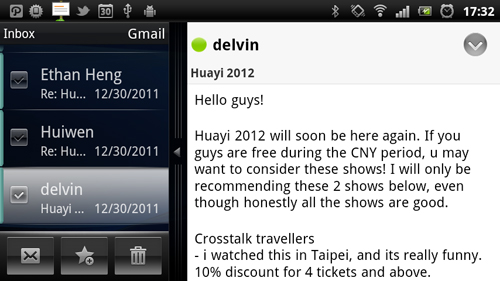 Write a Review
Compare This | Specifications
Above average battery life
Decent imaging quality from Exmor sensor
Ease of use with 3.7-inch display
Stiff and flushed physical keys
Odd placement of power and camera buttons
Our articles may contain affiliate links. If you buy through these links, we may earn a small commission.
Sponsored Links