A Feature-Rich Camera Which Needs More Power To Handle Its Own Speed. 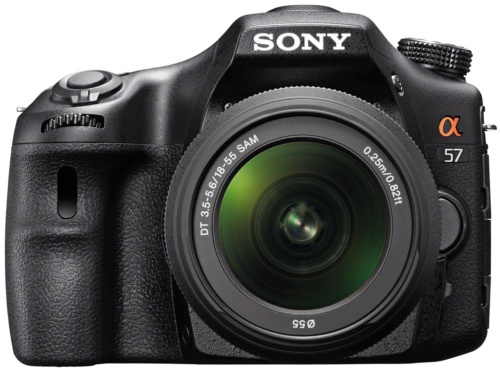 The Sony SLT-A57 is the sequel to one of the first translucent mirror interchangeable lens cameras in the world, the two-year old SLT-A55 (SLT stands for ‘single lens translucent’). Instead of doing away with the mirror box found in DSLRs as mirrorless system cameras do, SLT cameras have translucent mirrors which allow most of the light to pass through to the sensor and AF array.

As a result, the translucent mirror doesn’t need to swing out of the way for the camera to capture an image, and that’s why SLT cameras can shoot at such high frame-rates (10 frames per second for the A57). To put that into perspective, the EOS 7D - Canon’s mid-range sports DLSR - shoots up to eight frames per second and is nearly twice the price. Another upside to having a translucent mirror is that auto-focus in Live View is just as responsive as when using the viewfinder.

One downside with SLT cameras is that there can’t be an optical viewfinder, and all SLT cameras come with electronic viewfinders (EVF) instead. We found the 2,359k dot OLED EVF on last year’s mid-range SLT-A65 responsive; alas the cheaper A57 comes with a lesser 1440k dot LCD EVF which isn’t as good. In bright light the image can look harsh and washed out, and in low light the ‘rainbow’ trailing effect when panning quickly can be seen. And even though the mirror is locked, the EVF and Live View still blacks out for a moment as the shutter is released.

The rest of the A57’s physical design fares better. The camera’s protruding grip provides a comfortable and solid grip, even with a heavy telephoto lens mounted. The A57 needs that grip, as it’s a bigger camera than the A55. The larger body creates space for a larger battery (550 shots now compared to the A55’s 330), but the A57 loses the built-in GPS which came with the A55.

Operation is smooth, thanks to the many dedicated controls and the electronic overlay menu. To change any essential controls like ISO, drive mode and AF mode, tap the Fn button and you can easily access the overlay menu which surrounds the screen, while keeping an eye on your scene. Because the viewfinder is electronic, you can also change settings without taking your eye off the EVF.

The flip LCD is useful in providing more viewing angles, but we’re not great fans of LCDs which hinge from the bottom, finding LCDs which hinge from the side more versatile. Unlike DLSR cameras’ auto-focus systems which tend to slow down while in Live View, the A57’s AF while using Live View is just as quick as when using the EVF. It’s quite refreshing to be able to shoot both like a DSLR and like a digital compact using the same camera. 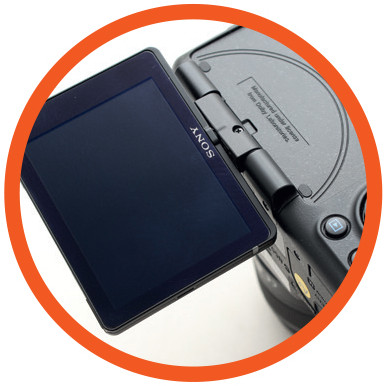 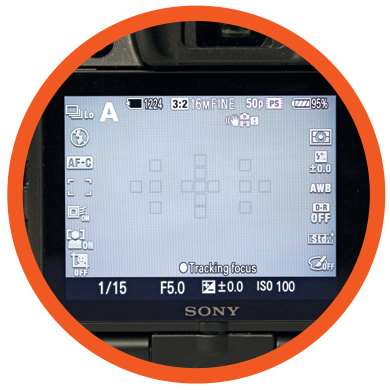 You also get focus peaking, an advanced feature for an entry-level camera; when focusing manually the A57 highlights in color the areas of the scene which are in focus. This makes manual focusing quicker and more accurate than trying to eyeball it.

The A57 suffers from the inability to quickly switch AF points. To switch AF points manually, you have to tap the Fn button, go into AF Area, choose Local, then use the d-pad to choose between the 15 available points. To change the point, you have to repeat all over again. We saw the same slow method in the higher-end A65, and we hope that Sony figures how out to make the process quicker and easier next time.

One of the exciting bits about the A57 is how fast it can go, up to 10 frames per second in AF Continuous mode (where the camera will continuously auto-focus in-between frames to track moving subjects). While that seems to open up the A57 to sports shooting, the AF just doesn’t seem up to the task of correctly focusing at 10 fps. AF-C will sometimes track off subjects in-between shots, and get confused with dominant foregrounds with smaller but closer subjects. It seems to do better with subjects that move in straight lines parallel to the camera, but not with subjects moving closer or further away. Accuracy drops off substantially in low-light, sometimes the A57 isn’t able to focus at all. 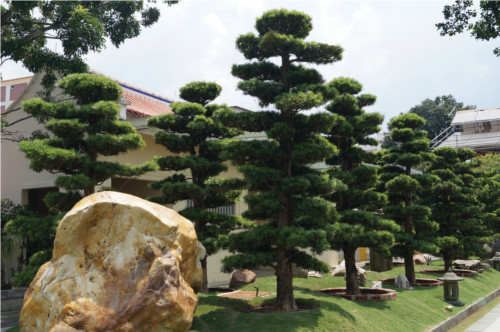 An even faster 12 fps speed is possible in the new Tele-zoom Continuous Advance Priority AE mode, which crops the image to 8.4MP. But it’s crippled from the start, without the ability to manually set shutter speed, there’s all the possibility that you can shoot fast subjects at a quick burst-rate, at too slow a shutter speed to freeze them. When in good light, the A57 will intelligently rack up the shutter speed to as high as possible, but it’s impossible to manually set exposure in low-light. We recognize that the A57 is an entry-level camera which isn’t intended to be a professional sports body, but then - why put such fast frame-rates into a camera if the camera can’t handle it?

The A57 also comes with the Clear Image Zoom feature with ‘Pixel Super Resolution Technology’ which adds 2x digital zoom, but instead of just cropping into the original image, Clear Image Zoom enlarges the crop back to 16MP. Digital cropping and scaling always involves detail and clarity loss, no matter what the marketing says, and it’s the same with the A57. Without Clear Image Zoom, the A57 enjoys a high resolution of 2200x2000LPH (vertical and horizontal), at 1.5x Clear Image Zoom resolution drops to 1600x1400LPH, at 2x it drops to 1200x1200LPH and image artifacts are all over the image. In short, we’d recommend skipping this mode.

We have no qualms about the Auto HDR mode however, which works well to push the shadows while preserving the highlights. You can choose to separate the HDR series by one to six EV, and it’s best to set the A57 on a tripod as you can’t set or see any other setting – the camera might just well take a long exposure image while you’re hand-holding it. It’s not as technically sound as a HDR image you take and post-process by yourself, but it is much simpler and quicker to get a balanced exposure.

Image noise is quite acceptable up to ISO1600, at ISO3200 details get smudged but the image remains usable if in need of a little noise reduction. At ISO6400 noise and detail loss is too much for our own preference, images are too muddy above that sensitivity.

As an everyday camera for most casual shooting situations, the A57 leads with rich features. It should prove a capable entry-level camera which comes with an impressive list of features like Auto-HDR and Sweep Panorama, while keeping shooting easy with the ability to use Live View just like on a digital compact camera.

Some of the marketing just doesn’t add up though, while the A57 is fine for most casual quick shots with quick but consistent subjects (think runners versus basketball players), the 10 frames per second speed doesn’t make it a suitable sports camera thanks to the slow and inaccurate AF-C performance. 12 fps in Tele-zoom Continuous mode also sounds impressive, until you realize that you can’t set minimum shutter speed. While the A57 tries to keep shutter speed as high as possible, shutter speeds will automatically drop in low-light. 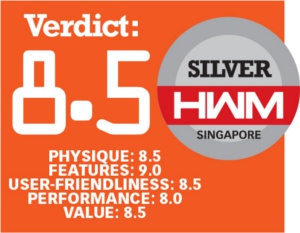