Using the A9 paired with the 24-70mm or 70-200mm lens gave us great results under all conditions – both outdoors and indoors. The camera proved to be very fast and snappy in real world use. In fact, it was almost too fast, as we soon found ourselves with more than 20GB of images to sort through! That 20 frames per second (fps) capture rate certainly gives you a good chance to catch motion, and we spent a good amount of time trying to catch images of some of our local avian residents.

This is where the camera's AF performance and speedy response really comes into play, as these Oriental Magpie-Robins were zooming around while they feasted on bugs. Eye-detect AF didn’t seem to come into play with these smaller animals (presumably because their eyes were too small), and Wide area mode seemed to be a little slow for faster movements. Our usual set-up of using the shutter button to activate focus also seemed to be just a split-second too slow, so we assigned AF activation to the just AF-ON button, allowing us to get and hold focus while waiting for the right moment like for example, the hops below. Shifting to “Lock-On: Flexible Spot” AF mode also seemed to give us better results. As long as we placed the AF cursor over our subject (in this case the Oriental Magpie-Robin) and held the AF-ON button down, the camera continues to track our subject, and then it was just a question of our ability to anticipate the actions we wanted to capture. As you can see from the images above, there certainly is plenty of detail to be had from this camera. Even at ISO 5000, you can make out the feathers of this Oriental Magpie-Robin and the ant in its beak!  One thing to note though, is that this 20fps shooting rate is only accessible with electronic shutter enabled.  The ability to continuously focus while taking images is also limited to the list of lenses on this page at the moment, so some lens upgrades may be required if you wish to tap in to the full potential of the camera. 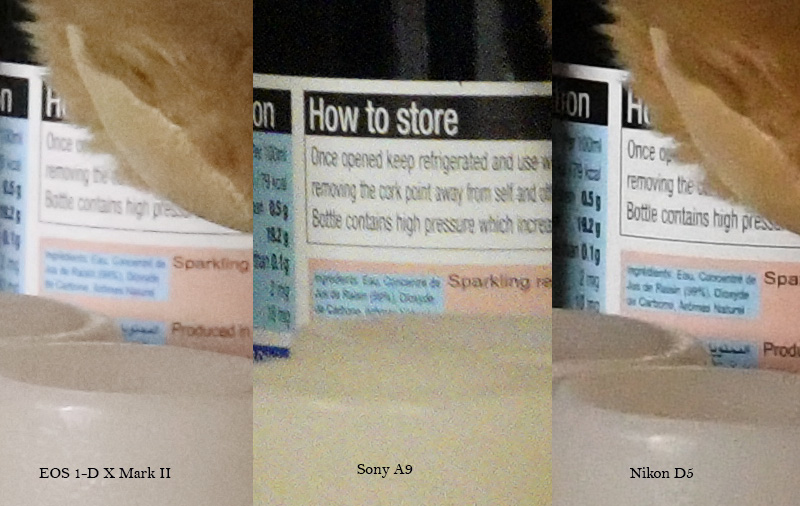 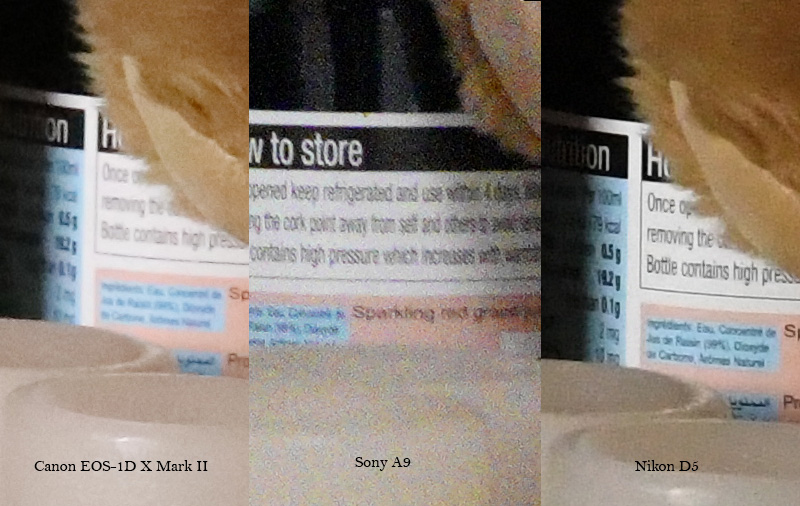 In terms of high ISO capability, we compared some indoor shoots from the A9 to those from our previous tests and found that A9 came in somewhere between the Nikon D5 and the Canon EOS-1D X Mark II. As you can see from the images above, at ISO 12800, the A9 still holds a good amount of detail, but go up to ISO 25600 and both luminance and color noise quickly start to seep in. The EOS-1D X Mark II looks cleaner at both ISO 12800 and 25600, but does so at the expense of detail. Text and texture are obviously blurred in the image, though we do think that can be restored with a bit of post-processing. When compared to the Sony A7R II and A7S II at ISO 51200, the A9 appears to have less color noise than the A7R II. Detail loss due to in-camera noise reduction is also noticeably less drastic, though both cameras obviously fall far behind the A7S II. In short, we’d keep the A9 to ISO 12800 and below for demanding projects, stepping up to ISO 25600 or 51200 only with post-processing. Work within these limits, and the camera will give you great images, with nice colors and good dynamic range.

In terms of battery life, the A9 is much improved thanks to the new NP-FZ100 battery pack, which lets it get up to 480 shots on a single charge via the EVF, and 650 shots via the LCD. That's much better than the 290 shots achieved by the A7R II and even the 310 by the A7S II (both via the EVF). There's also an optional vertical battery grip you can get that takes two NP-FZ100 batteries, thus letting you double the battery life to about 960 shots. That gets the battery life close to that of the Canon EOS-1D X Mark II (1,210 shots), but still falls well behind the Nikon D5's staggering 3,780 shots.

Write a Review
Compare This | Specifications
Incredibly fast capture rate with AF performance to match
Relatively lower priced than the competition
Better handling than A7 series
Good image quality at lower ISO levels
Battery life still lags behind competition
Quite a bit of color noise at ISO levels above 12,800
Our articles may contain affiliate links. If you buy through these links, we may earn a small commission.
Sponsored Links