Sonos Roam review: A portable speaker that certainly can

Note: This article was first published on 1st May 2021. 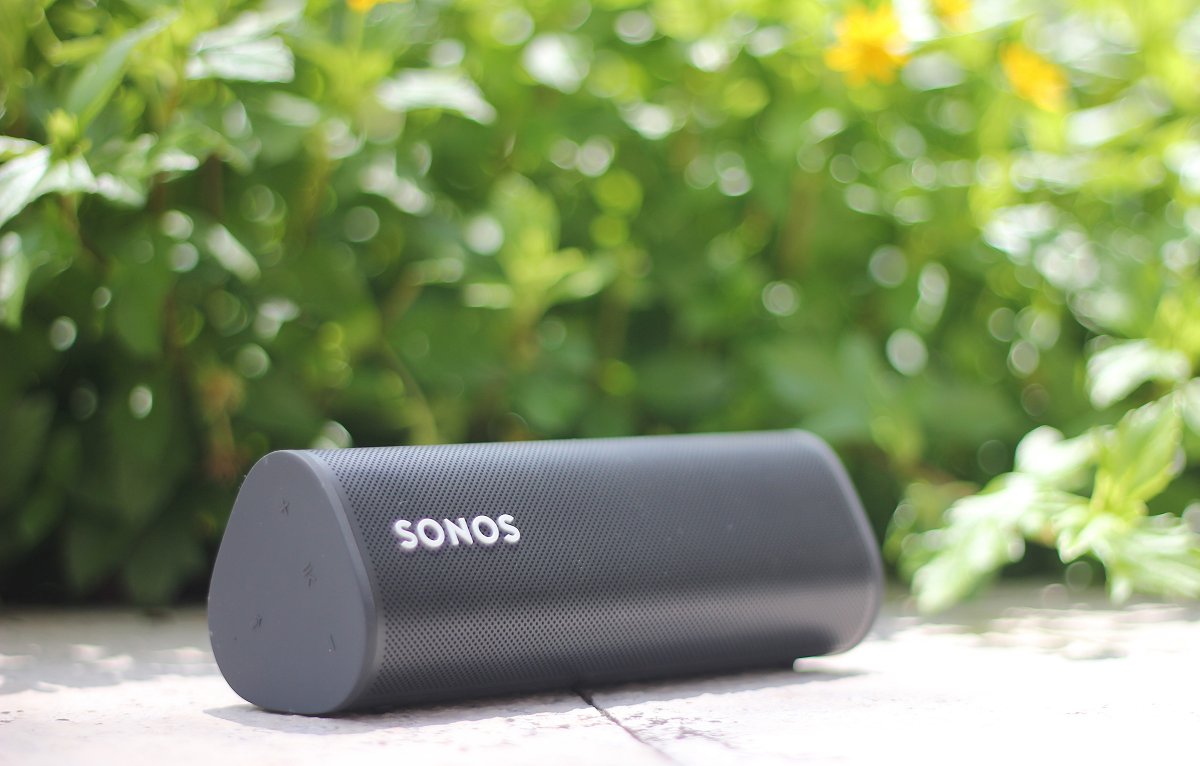 A portable speaker that certainly can

When Sonos first debuted the Move portable speaker sometime back, we were not really expecting the company to aim a little smaller with their new Sonos Roam launched earlier this year.

The Roam is a compact, portable speaker which, on paper at least, does come with a reasonably impressive laundry list of features. To start, Bluetooth and Wi-Fi connectivity lets you play your favourite tunes from your phone when out and about, while at home on Wi-Fi, it integrates seamlessly as part of your existing Sonos multi-room system, if you have one. It is quite rugged by design and appears to be able to take a bit of outdoors punishment, coming with an IP67 dust and water resistance rating. Other features include wireless charging (via an optional base), support for Apple Airplay 2, and the Roam even doubles up as a smart speaker with support for both Google Assistant and Amazon Alexa.

As far as portable speakers go, it is obvious that the Roam is stacked, spec-wise, which makes the asking price of S$299 (when it first launched) a reasonable ask.

Sizing up the downsized Roam 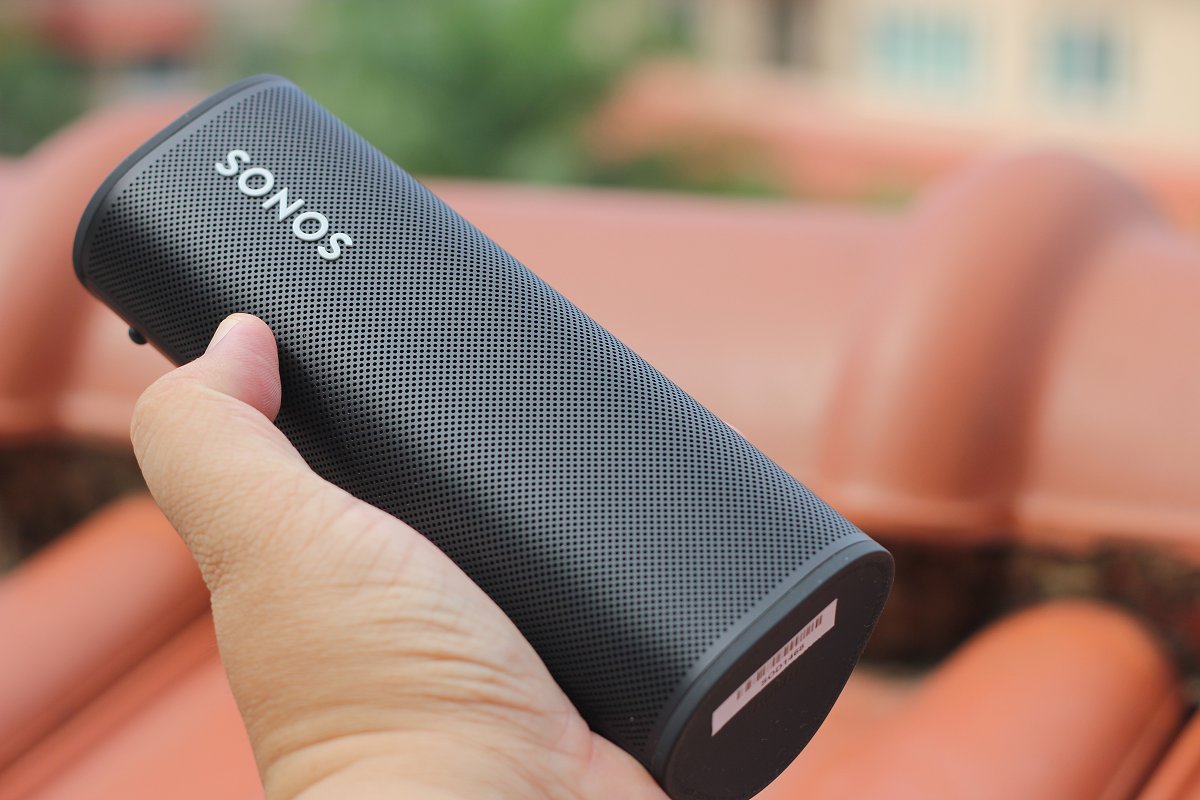 Historically, Sonos has not been too adventurous when it comes to having their products come in different colours, and the Roam is no different. It is available in two safe colours, Shadow black and Lunar white. As you can see our review unit was the former. It does retain the familiar Sonos aesthetic of an all-encompassing speaker enclosure with hundreds of tiny holes. At the same time, the Roam is shaped a bit like a triangular tube, which lets it project sound forward and upwards when laid horizontally. It bears pointing out that despite the speaker grille going all around, the Roam does not actually project audio in all directions.

Size-wise, the Roam is not much larger (or heavier) than a small water bottle, and the closest thing that comes to mind size-wise is a 6-inch sandwich from Subway. Tipping the scales at 430g, it is lightweight and can be tossed into your backpack without much fuss, or even strapped to your bike so you can get your tunes on while riding on the Park Connector Networks across Singapore.

Sonos makes a point of calling out that the Roam is the first in their speaker line-up to come with an IP67 rating for dust and water resistance. While the spec does mean that the Roam is rated to survive up to 30 minutes when submerged at up to a depth of one meter, in practical terms, using this in the shower should pose no issues, and if you head to the pool or the beach on occasion, there is less concern about damage from say, a leaking bottle in your bag, nearby water splashes, or even from the sand all around. 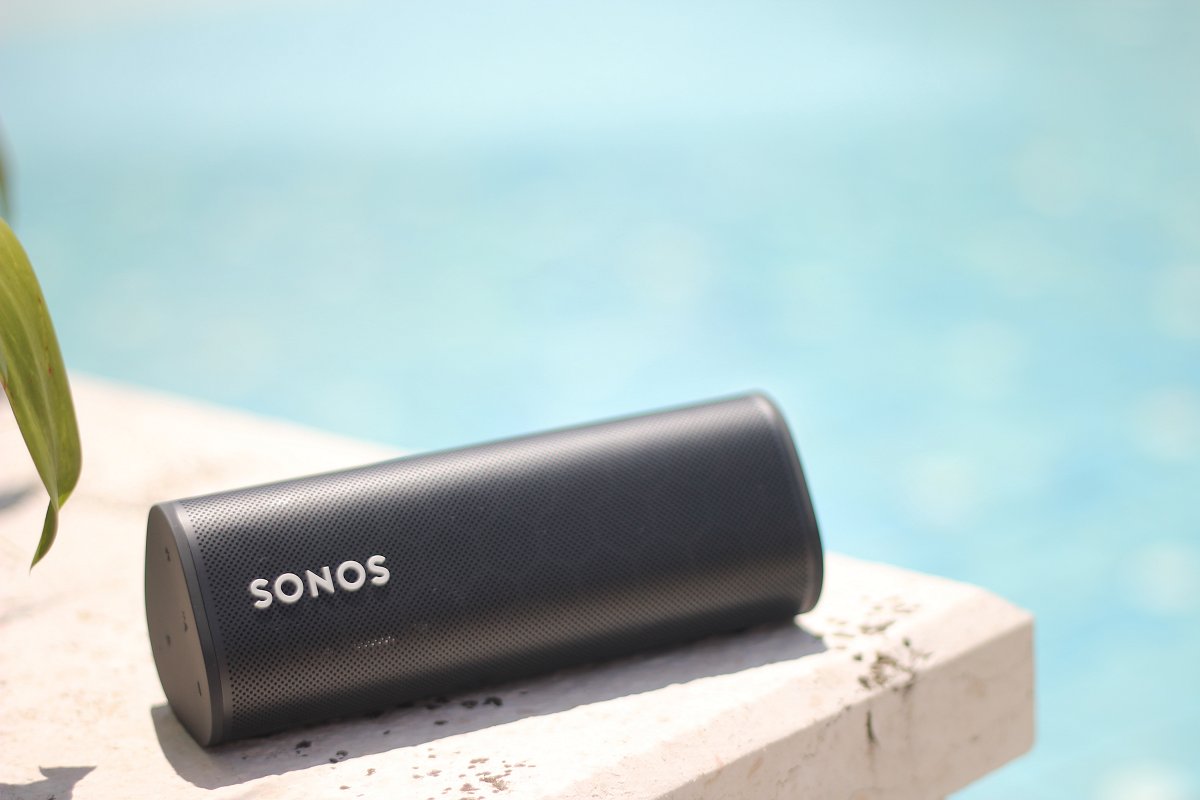 While the device fits easily in the hand, the metal speaker grille can be slippery when wet. Both ends of the speaker come with rubberised caps, which lend a bit of a ruggedized feel to the Roam.  Of course, while it's likely to be able to take the occasional tumble or three, the metal bits are susceptible to chips, scrapes, and dents.

Underneath one of the rubber caps are the control buttons for the Roam; the tactile buttons are easy to feel for and activate. The usual buttons for play/pause and track playback controls are provided. The end caps are also designed such that you can stand the Roam up on either end, with no worry of accidental button presses. 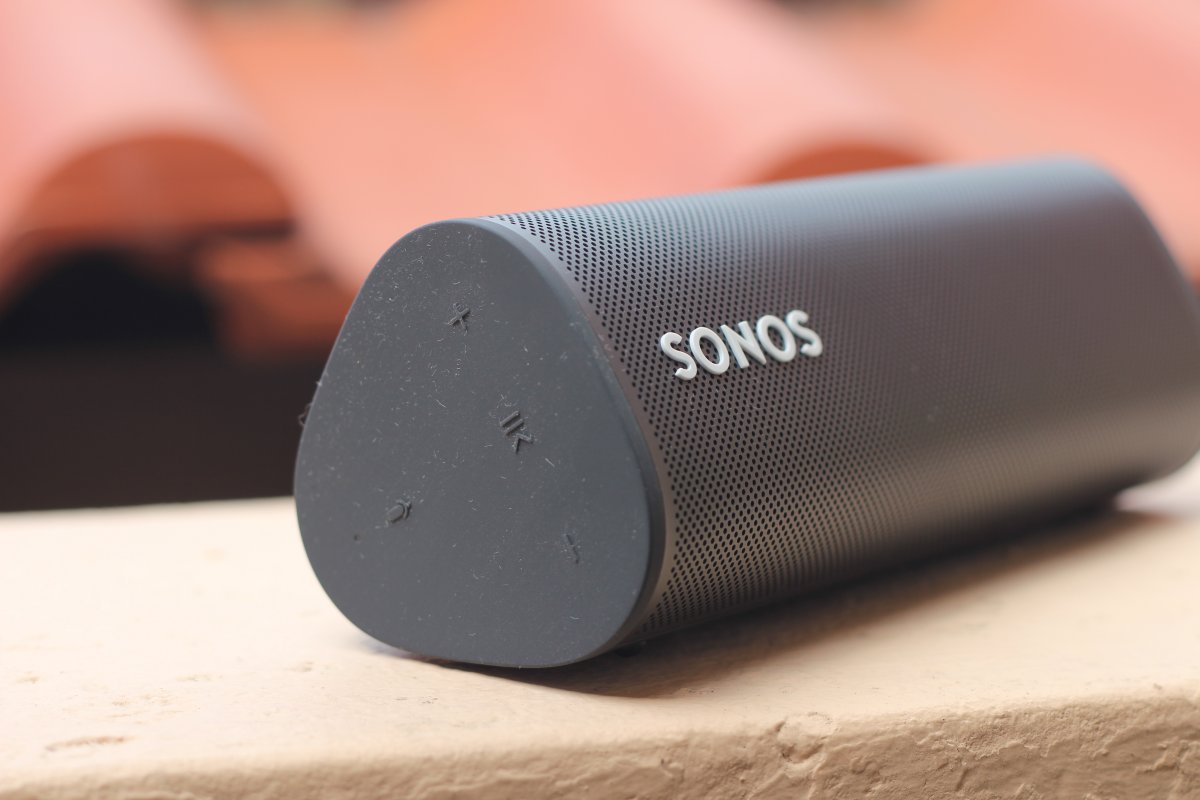 There is also an additional button used to enable (or to mute) the built-in microphones that Sonos uses to bring voice assistant capabilities to the Roam, whether Google Assistant, or Amazon’s Alexa is your liking (which you can set it through the app). The microphones pick up voice commands reasonably well, but speakerphone functionality is missing, which would have been nice to have in times like these as we’re spending more time with restricted movement instructions from the powers that be.

On the body of the Roam itself (see photo below), you will find a power button, as well as a USB-C port for charging. A nice touch here is how Sonos has designed the USB-C port angle so that it does not get in the way however you choose to place the Roam. Interestingly, the Roam comes with support for wireless charging, with support for the Qi standard. While the Roam does not come with a wireless charger out of the box (you only get a USB-A to USB-C cable), you can purchase one separately for S$79 which magnetically attaches to the Roam at the right angles for optimal charging. 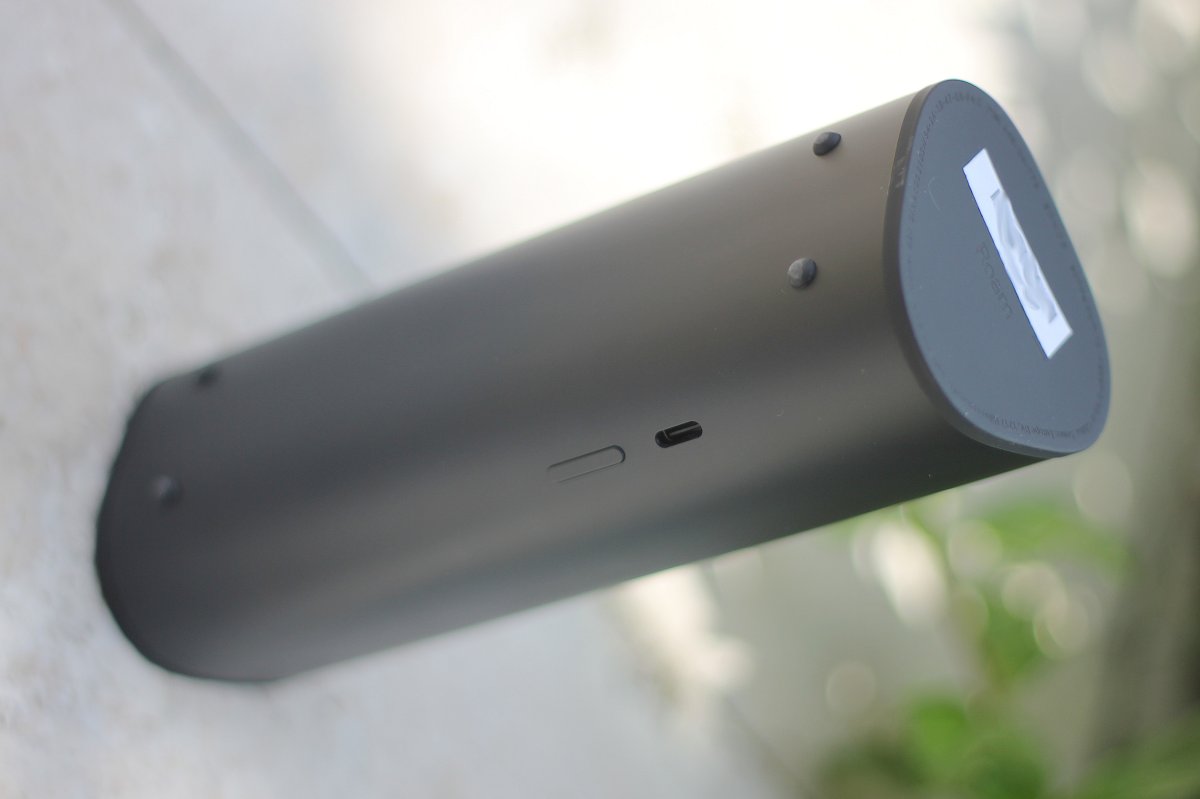 Alternatively, if you have existing Qi-compatible chargers lying around, simply place the right end of the speaker on the charging pad, watch for the status LED on the Roam to change colour to green, and you are good to go. Naturally, wireless charging will not be as fast as using a cable, so make sure to plan accordingly if you are looking to bring the Roam out for the day.

Sonos estimates the standby battery life of the Roam to be about 10 hours. We’ve used the Roam across the home and headed to the pool for a swim a couple of times over a week with no need to charge, but as always, your mileage may vary depending on how hard you use it.

How the Roam Performs

First things first, outside of our editors Kenny and Vijay, the rest of the team are not exactly bona-fide audiophiles, just to disclaim. Even so, when using the Sonos Roam indoors, I found its bass response to be remarkable for such a small speaker, while the highs are respectably bright. This is no audiophile-class speaker, but it produces enjoyable, crisp audio whether inside or out.

The Roam produces sound that is clearer and bigger than its size might indicate, though it clearly does not do as well as the Sonos-enabled Ikea Symfonisk which I also own. This may not work for sharing music during small parties at home or in your yard (for those with the added space) but is more than sufficient for sharing music with smaller groups, or even in small study spaces. One way around this is the ability to set up a pair of Roam units as a stereo pair; however, this feature only works when you are on Wi-Fi, and does not work on Bluetooth when you are out and about.

Talking about Bluetooth connectivity, presuming you have set up your Roam right using the Sonos app, the speaker will automatically switch and pair with your smartphone once you get outside of your home Wi-Fi network range.

Features that rely on Wi-Fi such as having the Roam access streaming services like Spotify and Apple Music are not going to be accessible when away from your home network, but in this case, streaming music via Bluetooth works fine. Sonos systems are generally designed to work with your home Wi-Fi, so you will find that getting the Roam working with other Wi-Fi networks i.e., in a hotel, Airbnb, or at a friend’s place can be a pain. In those situations, it's better to use it as a Bluetooth speaker.

The Roam’s audio capabilities are brought to you by a custom-designed racetrack mid-range woofer and a single tweeter; these are powered by dual class-H amplifiers. Through the Sonos app, you can adjust the Roam’s bass and treble settings, but unfortunately, you do not get something like a five-band equalizer for finer tweaks.

To further make things easier for the end-user, a feature we particularly like about the Roam is its Auto TruePlay feature, (which works for music streamed across both Wi-Fi and Bluetooth) which tunes the speaker’s performance to the surrounding space using the built-in microphones. As the “Auto” part indicates, the speaker will automatically adjust if you, say, pick up the Roam and move outside. In that event, the Roam will use its internal accelerometer to detect that it has moved, and therefore automatically make TruePlay adjustments. If you are not a fan of this feature, it can be disabled.

Another new feature we must point out is Sound Swap, which basically passes off audio from your Roam to the nearest Sonos speaker around, simply by holding down the play button. The feature works the other way around too. 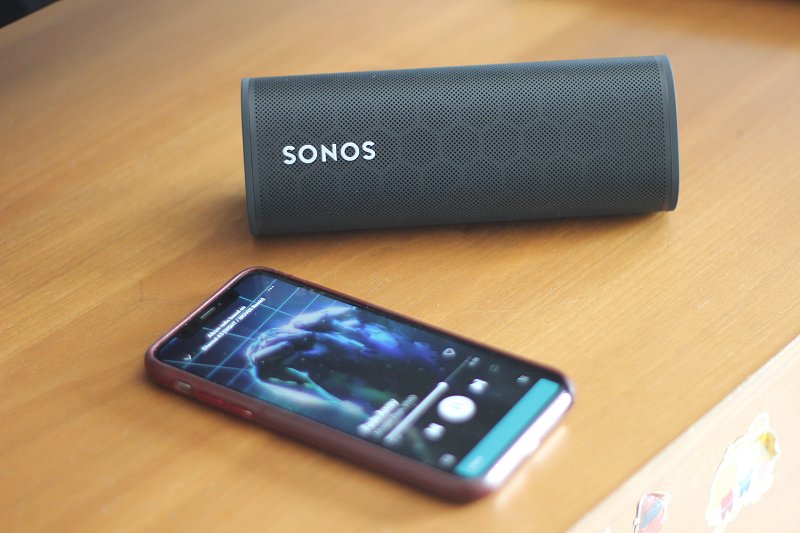 At the end of the day, the Roam is a portable speaker that is more for personal use, and at a stretch, for hanging out with small groups of friends and family. It looks good, and the design and some features like Auto TruePlay are clearly aimed at helping create a better audio experience for the user.

Features like stereo pairing, while cool, might not be as useful if you already have Sonos-enabled sound systems at home. You cannot use the Roam to stand in as surround speakers for your Sonos surround sound setup for your home theatre either.

That said, the Roam works best when you are out and about, and when you come home, transition your tunes to your home speakers without missing a beat. At home, features like AirPlay and support for voice assistants also make it a lot more useful than other portable speakers that you only use outside.

While it doesn't claim to deliver awesome audio quality, it's more than decent and can easily surprise anyone how capable this small speaker is. After all, the closest we've encountered for a good portable speaker is Creative's old Roar speaker series, which has been discontinued. In fact, the Sound Blaster Roar Pro and iRoar are actually more powerful, but they lack the design simplicity of the Sonos Roam. Not only in appearances but also in form factor, the Sonos Roam is easily more the more portable and handy counterpart. The Sonos Roam is truly designed to function well on your desk, outdoor when you're working out, or while biking/driving.

At S$299, it is not terribly expensive for the features and performance, and in our view, if you’re keen on getting a portable speaker set that’s a lot more useful than most others, and if you are already invested in the Sonos ecosystem, you can hardly go wrong picking up one of these. However, since its launch, it looks like TC Acoustic, the distributor for Sonos, has had to hike the price up to S$329. Despite that, the Roam is hard to beat candidate in its segment, ticking off almost all the checkboxes you could ask for.

Write a Review
Compare This | Specifications
Ideally designed for grab-and-go needs
IP67-rated water and dust resistance
Works well at your desk or outside
Bluetooth and Wi-Fi connectivity
Auto TruePlay tunes speaker's performance to its vicinity
Good audio performance for its size
Fits in with existing Sonos setup
AirPlay and voice assistant support
Wireless charging capable
Can't act as surround speakers for your Sonos home setup
Price doesn't include wireless charging pad
Our articles may contain affiliate links. If you buy through these links, we may earn a small commission.
Sponsored Links