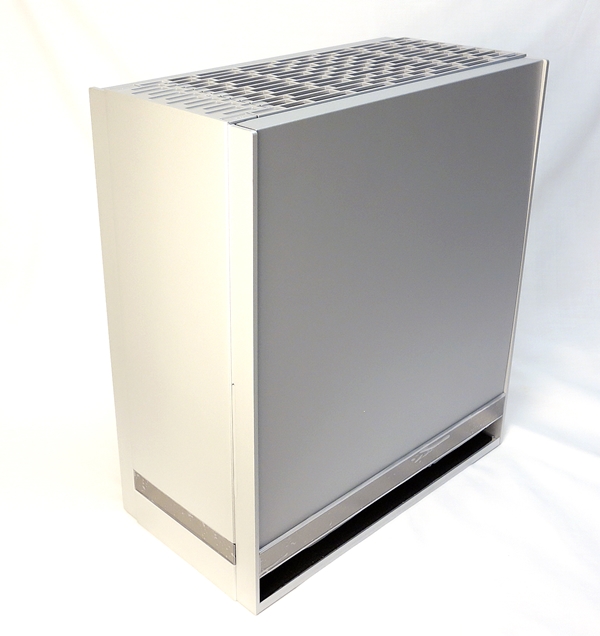 The SilverStone chassis manufacturer is known for its design concepts that don’t really fit the norm. From the Raven RV04, which required the motherboard to the mounted upside down, to the Sugo SG09, which is one of the most well-ventilated SFF PC chassis, the company’s offerings have product categories, which are extremely porous. This allows distinct features, which were initially introduced in some product lines, to be adapted on its other chassis.

With such design concepts in mind, the SilverStone Fortress FT05 has adopted the vertical motherboard mounting feature from the Raven RV02 and RV01, while keeping the clean, minimalist facade of the Fortress series chassis. Another unique design note is its absence of 5.25-inch drive mounting options, so you can kiss your regular optical drives goodbye! In our opinion, the designers of the new SilverStone Fortress FT05 have taken an almost clinical approach, especially when engineering the outward appearance of the mid-tower chassis. There are two variants for the new FT05 series; the FT05 that features unadorned aluminum side panels, and the FT05-W, which features a windowed side panel. Both variants are available in two colors; black and silver. We had the chance to review the silver Fortress FT05 version (SST-FT05S). First and foremost, the Fortress FT05 is a mid-tower casing. While the photos might seem to convey that it looks more like a full tower casing, the reason is because of the the extraordinary internal design that brings about a slim and taller looking system. In fact, SilverStone says  that it's actually closer to to a larger micro-ATX casing. For example, the removal of 5.25-inch drive bays has allowed the casing to be a lot shorter in depth than expected. That also means the casing is designed to contain only the essentials and eliminates a lot of legacy requirements. The previous Fortress casing, the FT02 is 616mm in depth, but the new FT05 is just 427mm in depth. So keep these facts in mind while looking through the rest of the review.

The casing also looks like a solid block of metal, but where materials are concerned, you'll want to note that it uses a steel frame with aluminum panels all around. The gap towards the bottom of the chassis makes up the stand of the unit, and the stand’s inside has been padded with a thin layer of foam, which appears to be for sound dampening. 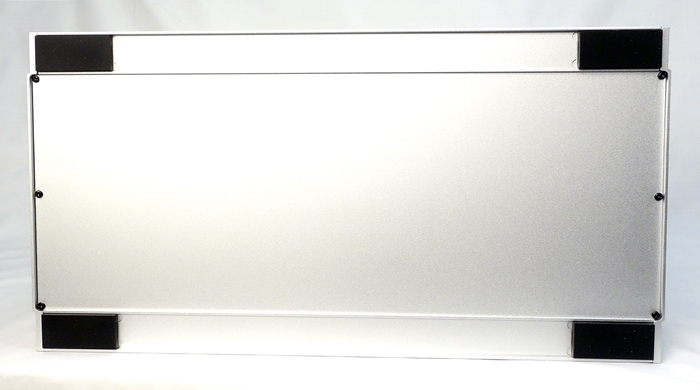 Tilting the chassis on its side, we saw four rubber pads, at each corner of the stand, to prevent the stand from scratching softer surfaces, like your polished wooden desktop. 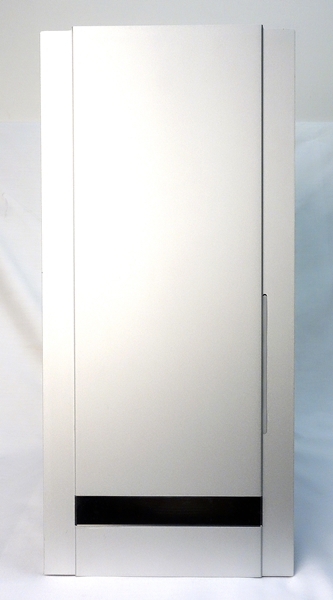 The aluminum side panels have a smooth metal finish, and they look exactly alike. The uniformness of the side panels are transplanted to the front as well, but its facade is broken by the SilverStone logo that is located near the bottom. There’s also a vertical thin rubber cover that seals the slot for an optional slim, slot-loading optical disc drive. 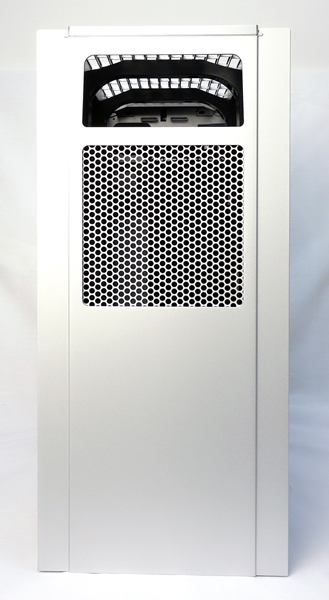 From the rear, we can see outlet vents for a cooling fan, as well as a recess at the top that actually allows hot air to be expelled. Remember that we mentioned earlier that this chassis has adopted the vertical motherboard mounting feature of the Raven RV04 chassis? This recess will also allow you to access the ports of your expansion cards. The top panel of the chassis is well-ventilated and it has a trapdoor-like cover that hides the I/O ports. They consist of two USB 3.0 ports, an audio jack, and a microphone input jack. There’s also a pair of fan control switches; each switch has only two settings, “High” or “Low”. The power and reset buttons are on either side of the trapdoor. Since both buttons look identical, the uninitiated may press the wrong button even if they are labelled. Also, another complaint is the fragile top panel as it’s fabricated from moulded plastic. It’s quite susceptible to wear and tear and we already witnessed some silver paint flaking off the panel at some areas where the panels latches onto the steel body of the chassis. 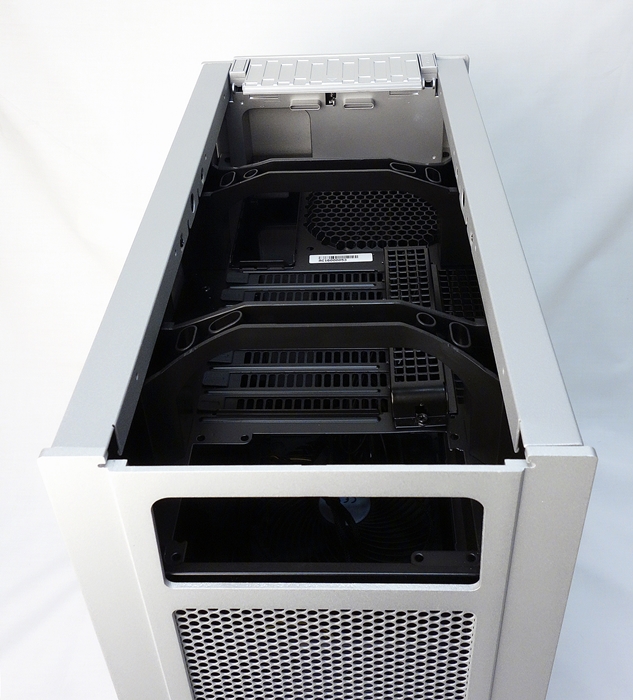 In order to have a clearer look at the chassis, we first removed the top plastic panel that slides off from the rear. The exposed recess provides access to the ports of expansion cards, as well as the PSU. 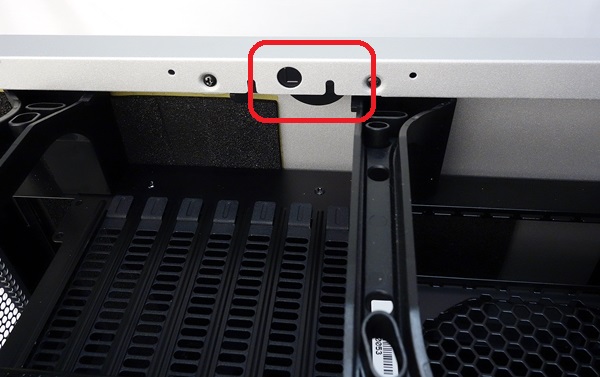 Following which, we had to yank off both side panels by squeezing a latch located on the inside of each panel, and pulling hard upwards to remove the panels. Removing side panels is usually a tool-free affair for high-end casings, but these side panels require a fair bit of strength for removal. 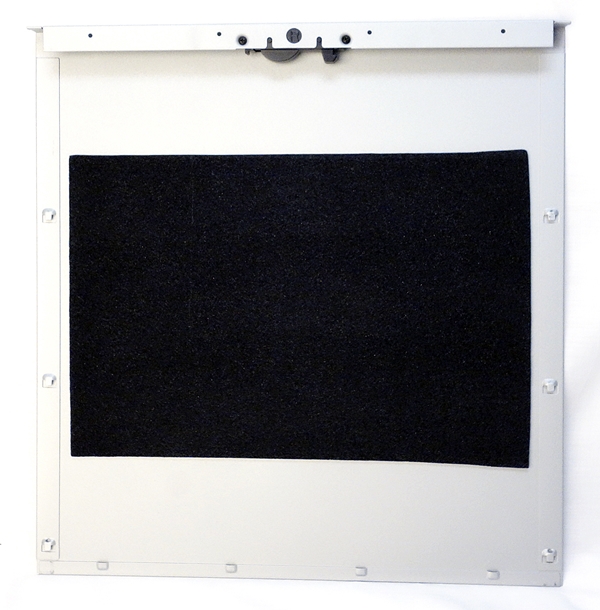 With the top panel and sides removed, we now have a full interior view of the casing and a further reminder of the unorthodox casing layout:- 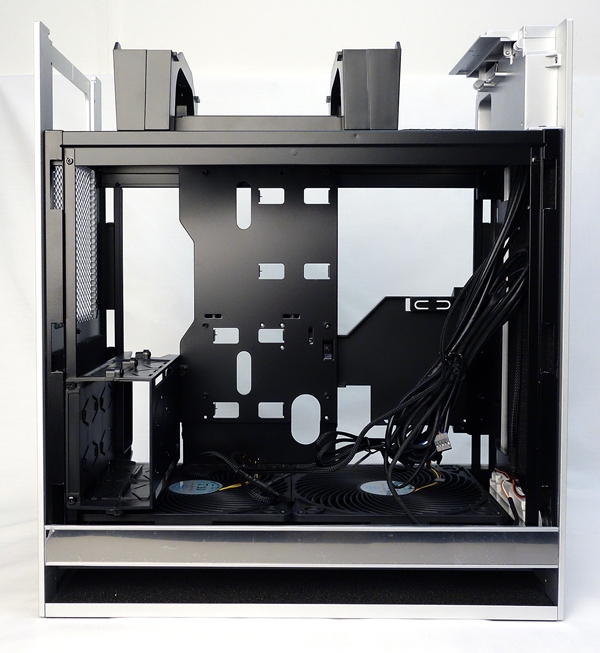 At the bottom lefthand corner, there’s a 3.5-inch drive enclosure that will accommodate up to a pair of such drives. We wished SilverStone had bundled mounting brackets so that we had the option of mounting 2.5-inch drives out of the box (nothing that a visit to the hardware store won't fix, but we expected some design flexibility and convenience). We also see the pair of bottom 180mm intake cooling fans that draw air from the bottom of the chassis. Beyond the HDD enclosure, there’s the motherboard mount area that will allow the board to be installed vertically. 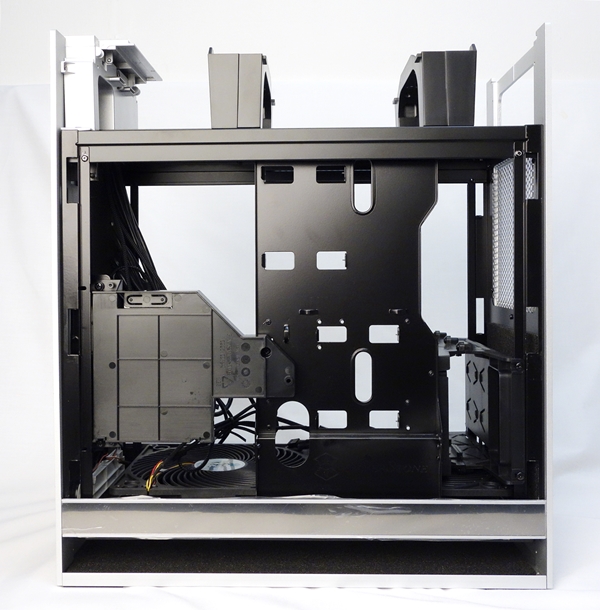 Turning our attention to the other side of the casing, there’s a tray that will accommodate the optical front slot-loading optical drive. Just beyond the drive tray, there are two 2.5-inch drive mounts. 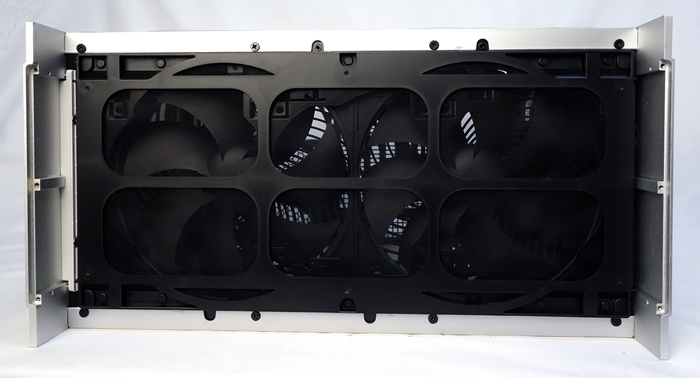 We had to break out the toolbox to remove the bottom stand. After remove the entire stand, we see a pair of 180mm intake fans, and there’s a dust filter that helps to minimize the amount of gunk that will get sucked into the FT05 chassis. As a result this design feature, we strongly recommend the chassis to be placed away from the floor, and on the desktop, where it’s less dusty. This recommendation also allows you to better showcase this metal beauty than tuck it away at some corner under the desk.

Write a Review
Compare This | Specifications
Elegant and minimalistic exterior
Sturdy build
Easy installation of 2.5- and 3.5-inch drives
Unconventional orientation of certain components
Lack of 5.25-inch drive bays
Expensive for a mid-tower chassis
Our articles may contain affiliate links. If you buy through these links, we may earn a small commission.
Sponsored Links